Josh Adams plundered four tries as the British and Irish Lions opened their tour on South African soil with a rampant 56-14 victory over the Sigma Lions.

The hosts were rabbits caught in the headlights as they leaked early tries to Louis Rees-Zammit and Hamish Watson, but an impressive uprising followed that troubled the Lions’ defence for a spell.

Once that had been subdued, Warren Gatland’s men ran riot with Adams helping himself to four second-half tries against the weakest of the provincial sides they will face over the coming weeks.

Adams lifted his total to five touch downs in two starts after also getting on the scoresheet against Japan, placing him in pole position to secure one of the wing slots against the Springboks on July 24.

The jury is still out on the 10-12 partnership between Farrell and Finn Russell, but Scotland’s maverick playmaker provided thrilling moments of skill to enhance his own Test prospects.

Although Adams ended up with four tries, it was Russell’s Scotland team-mate Watson who was named official man of the match after he delivered an all-action display at openside.

And after the cruel misfortune of losing Alun Wyn Jones and Justin Tipuric to injuries in the curtain-raiser against Japan a week earlier, the Lions were relieved to see no obvious casualties go down in Johannesburg. 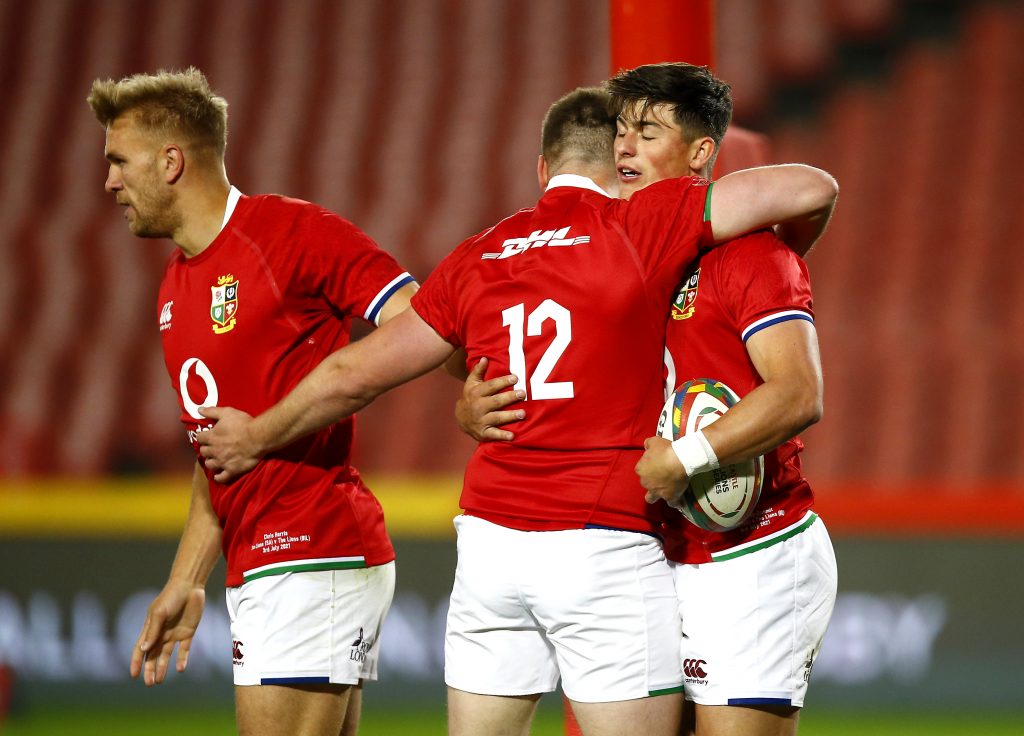 Russell took early control and the tourists benefited by crossing in the fourth minute, the Scotland fly-half acting as ringmaster until compatriot Chris Harris chipped ahead for Rees-Zammit to produce a classy finish on his debut.

The hosts were sent hurtling backwards by muscular carries from Courtney Lawes, Watson and Kyle Sinckler and the pressure was too much as Watson burst over the whitewash.

Watson’s explosive start continued as he flattened Burger Odendaal with a ferocious tackle, but for the first time the Lions were in reverse as the South African province made headway through pick and goes, forcing a series of penalties. 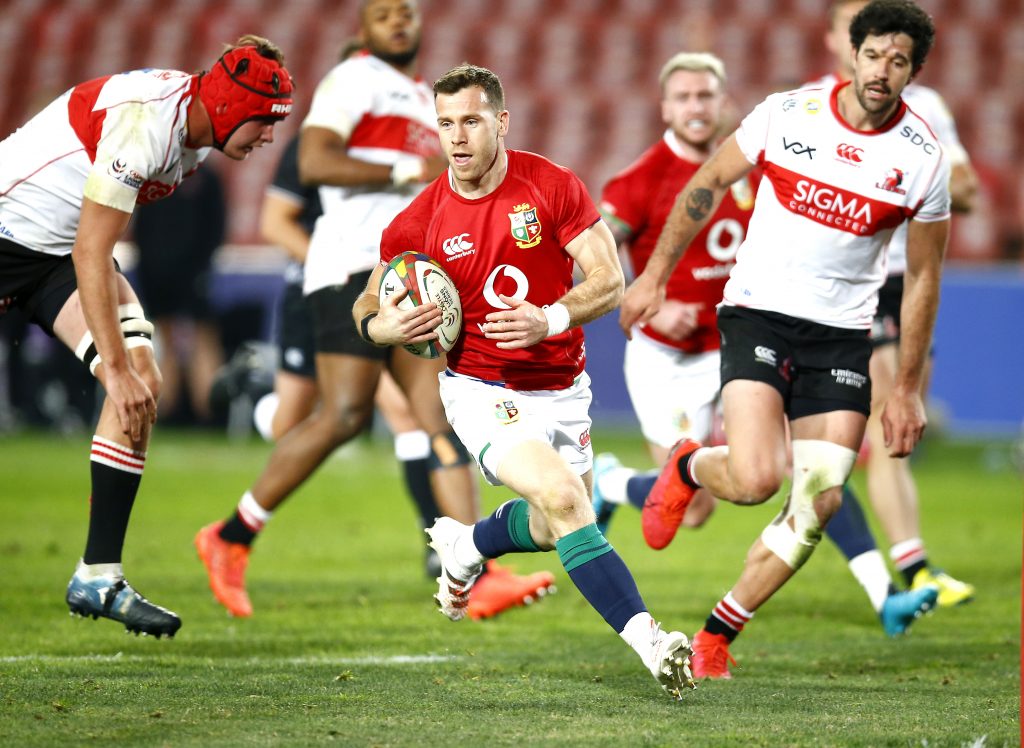 Only committed defence, spearheaded by Watson, kept the try-line intact until the danger passed and an attritional phase followed during which the tourists were turned over and an attack broke down amid confusion between Farrell and Ali Price.

The disjointed theme continued until the Lions sprung into action as their opponents dithered at a 33rd-minute line-out, a long throw finding Farrell who spun and teed-up Price running at pace for a try under the posts.

But it then became the tourists’ turn to switch off as their frail blindside defence was cleverly exploited and with the red wall not scrambling in time, flanker Vincent Tshituka powered over. 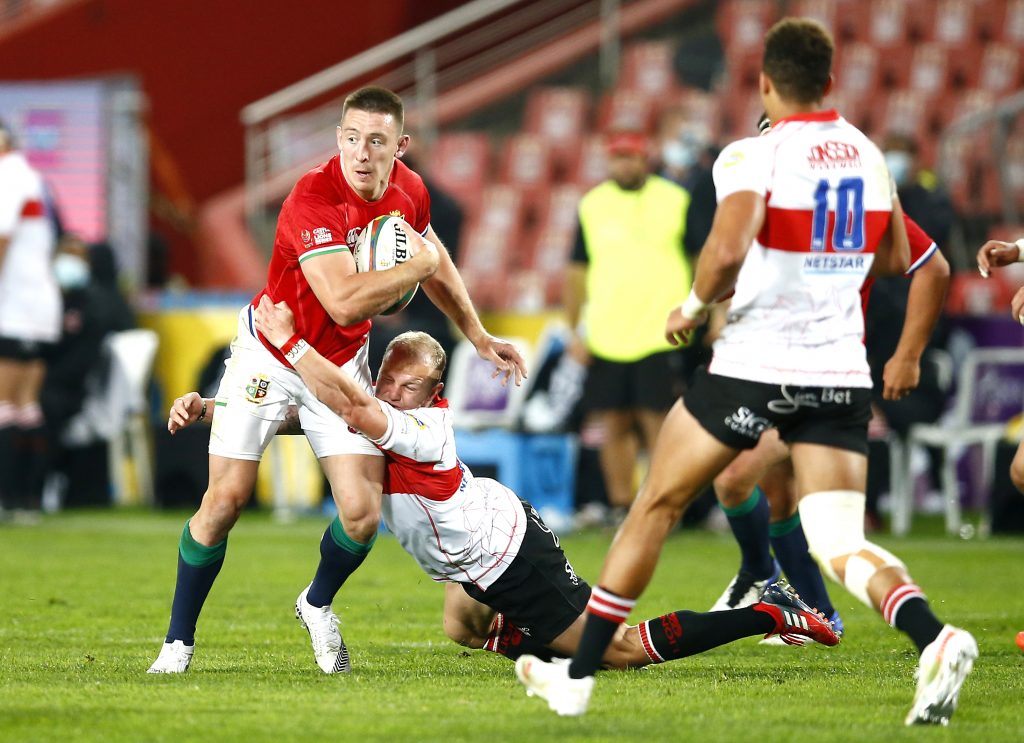 A neck roll by Lawes saw a try by Wyn Jones chalked off but 47 seconds into the second half Adams crossed using sharp footwork after Watson and Price combined at a line-out to create the space.

Immediately the Lions’ defence were out-thought on the short side to give wing Rabz Maxwane an easy run in, but Russell’s pinpoint chip to the wing gave Adams an easy second that put Gatland’s men back in command.

The bench had arrived and two of the replacements were involved in the next try as Elliot Daly jinked a way through the white shirts before slipping a pass for Davies to score.

Jonny Hill sent Adams over for his third – the Wales wing will score few easier tries – and it was another simple run in for his fourth after he gathered Daly’s long pass to cross unopposed.