END_OF_DOCUMENT_TOKEN_TO_BE_REPLACED

Where the All Blacks could have exploited Ireland

Much was made of the narrow outside-in rush defence employed by Ireland against the All Blacks in Dublin which helped the side to a rare victory over the touring New Zealanders.

Ireland’s quick-firing defence ensured that whenever the ball was delivered through the hands to the All Blacks’ sideline attackers, they often struggled to even catch the ball, let alone make any progress up the flank.

In New Zealand’s first set of attacking phases where they let the ball go beyond the first or second man, almost five minutes into the match, Brodie Retallick sets up a breakdown in the middle of the park before the ball is spun wide to Ardie Savea near the left-hand sideline. Ireland forwards Tadhg Furlong and Caelan Dorris are right in Savea’s face as he receives the pass from Beauden Barrett, however, and the All Blacks number 8 fumbles the ball while trying to quickly sling it onto Anton Lienert-Brown. 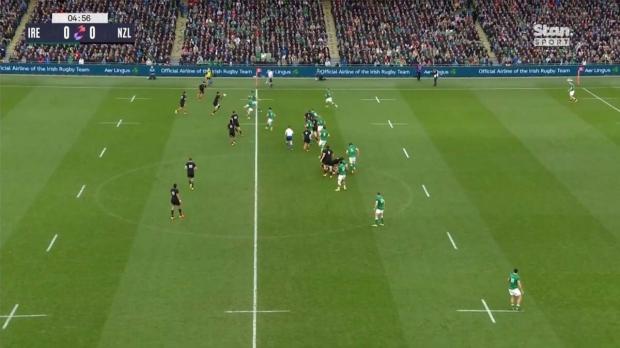 While it was still incredibly early in the match, Ireland had clearly shown their hand on defence and were going to utilise a similar tactic to what had suppressed New Zealand’s attack against both South Africa and Italy earlier on their tour.

While an outside-in rush defence is the best way to shut down attacks out wide, it also leaves space behind the defensive line which smart playmakers can exploit – and that’s exactly what Beauden Barrett attempts to do in the next two opportunities he has.

On New Zealand’s very next attacking phase after the Ardie Savea error, Barrett receives the ball 35 metres out from the Irish line and attempts to thread a grubber through into a gaping hole between the onrushing defence and Ireland right wing Andrew Conway, who’s covering the backfield. Unfortunately for Barrett, the kick is blocked by the outstretched boot of James Ryan, and Ireland manage to reclaim possession and quickly kick the ball back down the field. If, however, Ryan hadn’t been able to get a foot in front of the ball, the All Blacks would have been working with a three or four-on-one overlap as Conway is flat footed and wouldn’t be in a position to get to the bouncing ball before the chasing Rieko Ioane.

Moments later, the All Blacks are back on attack, with a lineout set up on the Irish 22, and this time Barrett makes the home side pay for their narrow rush.

With Conway and Hugo Keenan covering the backfield, James Lowe is the widest defender for Ireland but lines up between NZ fullback Jordie Barrett and right wing Will Jordan, who’s parked near the right-hand touchline. As such, Jordan has ample space in front of him, with Keenan basically in line with Lowe, leaving almost a quarter of the field undefended.

Barrett pops a kick over the top of the defence, into the outstretched hands of Jordan, and the winger makes a great break towards the goal line. Some critics will suggest that tactical kicks are 50/50 plays and while that can be true in some instances, a back-pedalling defender will always struggle to compete with an attacking player who is running onto the ball.

If the defence leaves a large part of the field undefended and your kicker is accurate – as was the case in this instance – the play is going to come off more times than not, and the All Blacks came within a whisker of scoring a try. With a bit more patience at the breakdown, they should have capitalised after Jordan sets play up just metres away from the tryline.

It was a tactic that with a bit more luck, could have resulted in two tries to the All Blacks within the first 10 minutes of the match but for whatever reason, it’s seemingly shelved from that point on until late in the match.

Perhaps it was Barret’s departure with a head knock after 20-odd minutes that changed the way the All Blacks attacked, but it wasn’t until the 76th minute of the game when Ireland had taken a 26-20 lead that the tactic was revisited.

On this occasion, it’s reserve midfielder David Havili who opts for a kick-pass to get the ball beyond the narrow Ireland defence, but it’s clearly not a planned move because Jordan is not in a great position as the key chaser. Jordan needs to be almost parallel with Havili when boot is put to ball but instead he’s five metres behind his Tasman and Crusaders teammate.

On this occasion, the kick doesn’t need to go deep at all to exploit Ireland’s defence, it just needs to go over the closest defenders and give Jordan a free catch to put the All Blacks on the front foot.

Unfortunately, because of Jordan’s positioning and where the kick lands, Keenan is in the best spot to take advantage, plucks the ball out of the air and shoots down the sideline, effectively ending New Zealand’s chances at a victory. If Jordan had been in line with Havili and the ball had landed further up the park (or closer to the chasing wing), Jordan would have been in a far better position to make the catch compared to Keenan.

While the All Blacks were prepared for the offensive defence of Ireland and seemingly knew how to exploit its weaknesses, they rarely sought to do so, especially once senior playmaker Beauden Barrett had left the field.

The outside-in rush smothered the All Blacks’ attack but it shouldn’t have been the massive game-changer that it’s been heralded as since the match.

Barrett is arguably the best player in the world at the kick-pass but without him on the field, New Zealand only saw the rush defence as an obstacle, not an opportunity.