Worsley back coaching in France Next
Back
Gallagher Premiership

It is no secret that England and Eddie Jones have leaned heavily upon Saracens players over the last three years and it’s no surprise that the prospect of them potentially not being available during the Six Nations has caused a certain level of anxiety.

The sextet of Mako Vunipola, Jamie George, Maro Itoje, George Kruis, Billy Vunipola and Owen Farrell has been pivotal to England’s growth under Jones’ stewardship and they have formed the core of his side. If Saracens have gone well domestically and in Europe, England have tended to go well in the international arena alongside them.

Now, Elliot Daly can also be added to that group of England players plying their trade in north London, as well as Jack Singleton, who returned to the club this past summer having previously been a part of the club’s junior academy. Nick Isiekwe and Ben Earl are now also knocking on the English door, Ben Spencer looks like the next man up at scrum-half and Alex Lozowski has been involved in international squads numerous times before, too.

There is no evidence that those players won’t be involved in the Six Nations, other than a throwaway comment from Jones – who it should be noted is currently doing publicity for his new book – and if the group have been chalking up wins on a weekly basis with Saracens in the Gallagher Premiership between now and February, the club’s position in the table could be looking a lot healthier.

Despite currently being on -22 points and 26 points adrift of Leicester Tigers in eleventh, there is a lot of rugby to be played between now and the beginning of the Six Nations. There are five rounds of Premiership rugby in that window, potentially allowing for a maximum of 25 points gained and there would still be over half of the season left to play. There are not many people out there who genuinely feel that Saracens will be relegated this season.

But let’s play devil’s advocate and say that Jones is correct in his assertions and that the Saracens players opt to remove themselves from international selection for the duration of the Six Nations – a period which consists of four rounds of the Premiership and another potential 20 points – and show priority to their club and the predicament it has gotten itself into. A gargantuan loss, yes, but would it be the worst thing to happen?

We have seen countless World Cup – or British and Irish Lions tour – hangovers in the professional era. The amount of physical and mental energy that goes into preparing for and taking part in them can, completely understandably, leave players drained in the following season.

While that is not always the case and Saracens are one of the far more progressive thinking clubs in terms of player welfare in European rugby, there is a consideration to be debated and that is that a season immediately following a big tournament can be the perfect time to let players have mini-sabbaticals from international rugby.

'Saracens have become a toxic brand and only time can get them back to where they want to be'
– @chrisjonespress hears one sponsorship expert voice grave concern for the Saracens brand in the marketplace https://t.co/fUYy7BBLSV

Although it won’t necessarily aid England in their bid for Six Nations glory, the absence of those six or seven Saracens would open the door for new players, fresh energy and generally create opportunities that have not, due to their consistent performance over the last three and a bit years, existed with England.

Rejuvenation and increased competition for spots are always valuable, while ensuring that England are not required to lean quite so heavily on Saracens, given the current challenges at the club, is not the worst contingency plan for Jones and co.

Up front, Mako Vunipola and George have both cemented themselves in the England front row. They aren’t going anywhere and both will have their eyes fixed on going one step further and lifting the trophy at the 2023 World Cup.

If their potential spring absences opened the door to finding out whether or not Ellis Genge and Luke Cowan-Dickie can hold down the starting spots, with players such as Beno Obano and Tom Dunn given the opportunity to put down markers in the squad, England will be stronger for it.

The second row has been a closed shop of late, with Itoje and Kruis carrying the batons, Courtney Lawes rotating in and Joe Launchbury perhaps the best fourth option available to any nation other than South Africa. There has been little need to blood alternatives due to the ability, durability and consistency of those four. At 30, Lawes is up against it to make the next World Cup, while Kruis, 29, and Launchbury, 28, are more likely, although far from certainties.

Fresh legs could come in the form of Charlie Ewels, who would have a number of caps now in almost any other generation of English locks, while Northampton Saints’ David Ribbans qualifies for England on residency in the summer of 2020,when he will be one of the last to have secured the former three-year qualification. Exeter’s Jonny Hill, like Ewels, is another that would have been playing a more prominent role in a different generation and who could add to the group in February and March. 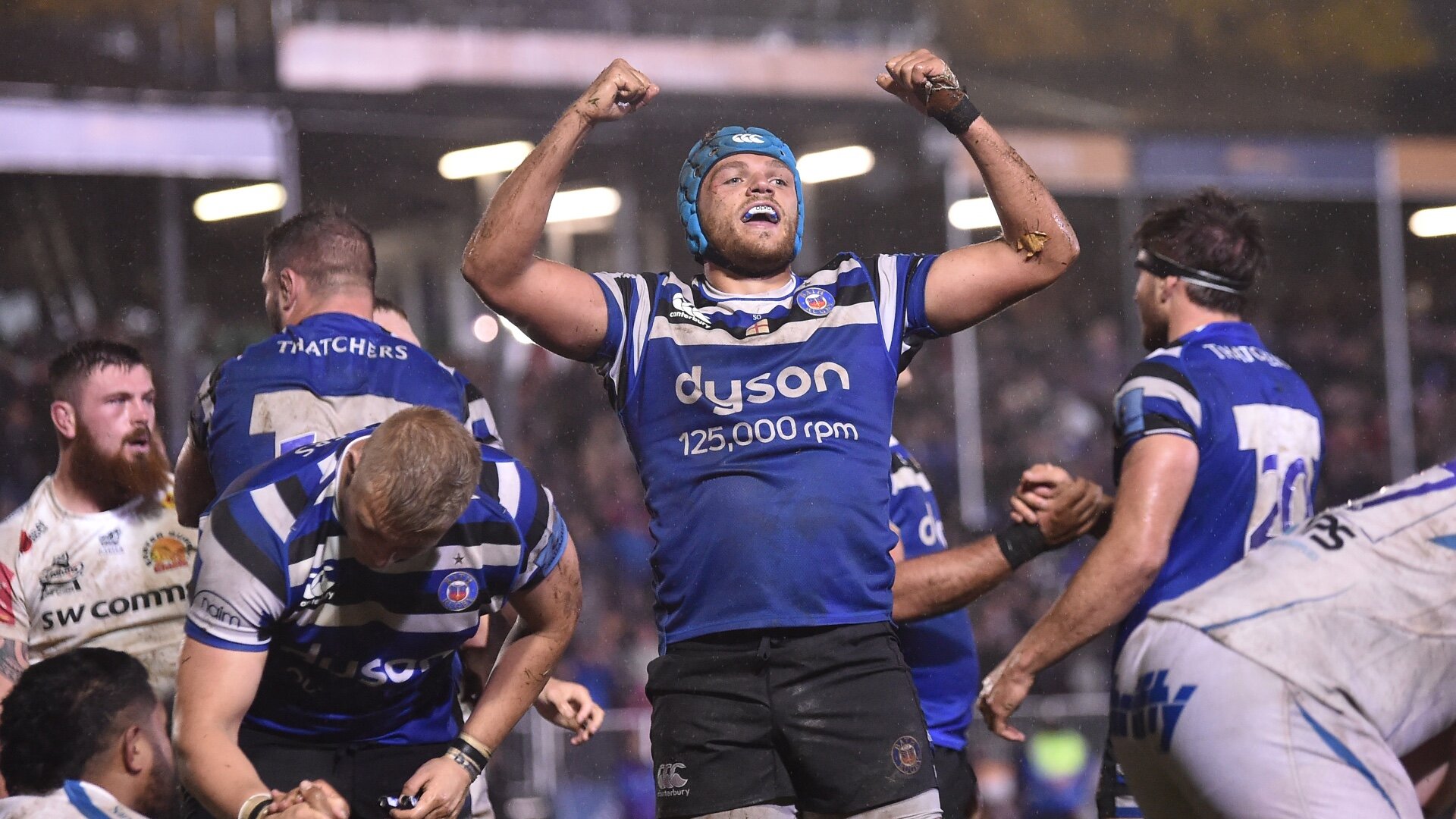 Zach Mercer has just two England caps to date, although his performances at the Premiership and European level with Bath have been excellent (Photo by Nathan Stirk/Getty Images)

Finally, in the pack, you come to No8 and England’s seeming reluctance to find a true deputy for Billy Vunipola. Nathan Hughes was used for a while before being jettisoned, while Zach Mercer’s opportunities have been few and far between.

Along with Obano, Dunn and Ewels, Mercer is a posterboy of Bath’s young, English-qualified pack and though he differs from Vunipola in playing style, he is too good to be sitting on the sidelines watching Test rugby. Sam Simmonds is another consideration if Jones is willing to put aside his preference for colossal size at the position, especially with the likes of Tom Curry, Sam Underhill and Lewis Ludlam bringing plenty of physicality through power, not just size.

If Spencer is not to be the next man up for England at scrum-half, could this finally herald Dan Robson’s time in a white jersey? If not the Wasps man, England’s stocks are slim behind Ben Youngs, with talents such as Alex Mitchell and Jack Maunder sat behind Cobus Reinach and Nic White respectively.

Huge news coming out of Saracens. Chairman Nigel Wray has said he is taking 'full responsibility' as the club opt not to contest salary cap punishment. https://t.co/WChWPCNiqv

It’s a position which screams apprentice material this season, especially with a handful of talented nines contracted out of the under-18s this past summer, including Raffi Quirke, Jonny Law, Jack van Poortvliet, Callum Pascoe and Stephen Varney.

At fly-half, Farrell’s absence could see Marcus Smith win his first senior caps having been around the England squad for the last two seasons. Joe Simmonds has been proving his worth with Exeter, too, although Jones could opt to continue with George Ford at 10 and turn the reins at inside centre over to someone else.

If Daly feels the call of his new club and a desire to help them off the bottom, it opens the door at full-back for Anthony Watson, which in turn would create opportunities on the wing for the likes of Joe Cokanasiga or Ollie Thorley.

If those players do decide to remove themselves from international selection, it not only creates a talent deficiency for England, it also creates ripples throughout the squad that affect balance and other positions in the team. No coach would actively want to face that situation going into a tournament where performance is everything and development takes a back seat.

That said, there are plenty of positives behind increasing England’s player pool and developing other leaders within the squad. That Saracens core, if they were to veto the Six Nations, would all be back in the summer and likely as influential to England’s success as they have ever been, irrespective of what goes on earlier in the year.

This is a potential opportunity for organic growth and rejuvenation, something that England’s relative success and health, particularly among key players, has not always allowed for under Jones since 2016.

The why, the how, and what's next for Saracens.https://t.co/HBDWucrMVO

England’s age profile at the recent World Cup may have people excited for the 2023 tournament, but if the group is locked down and they merely attempt to consolidate what they already have, they will come unstuck.

There still needs to be a steady stream of new players and increased competition into the squad, if England are to go one step further and lift the Webb Ellis Cup again, and that begins as soon as next year’s Six Nations.

WATCH: Episode two of The Season with Hamilton Boys’ High School – training ramps up a gear as the team hits the gym after the recent victory against Auckland Grammar