The British and Irish Lions came from behind in a dominant second half to seize an early lead in their series against South Africa with a tense 22-17 victory at Cape Town Stadium.

Trailing 12-3 at the interval after being picked apart by the boot of Handre Pollard, the Lions came alive as a Luke Cowan-Dickie try ignited a fightback that was completed by the boots of Dan Biggar and Owen Farrell.

South Africa were playing only their second international since lifting the 2019 World Cup but there was little sign of rustiness as their simple gameplan based around territory and forcing penalties initially unfolded as planned.

A fractured build-up that forced the entire Springboks squad to self-isolate for six days as well as key players such as Siya Kolisi and Pollard testing positive for coronavirus had no apparent impact as they played to their strengths beautifully.

It was often an ugly spectacle and at times the Lions looked slightly lost, failing to gain a meaningful foothold up-front and with half-backs Ali Price and Biggar unable to provide direction.

But a dramatic swing took place early in the second half as South Africa’s discipline collapsed as a resurgent Lions began stamping their authority in every area while Biggar kicked the points.

The feared Springboks pack went from bullies to bullied and although the world champions hustled a try through Faf De Klerk, they looked vulnerable across the pitch. 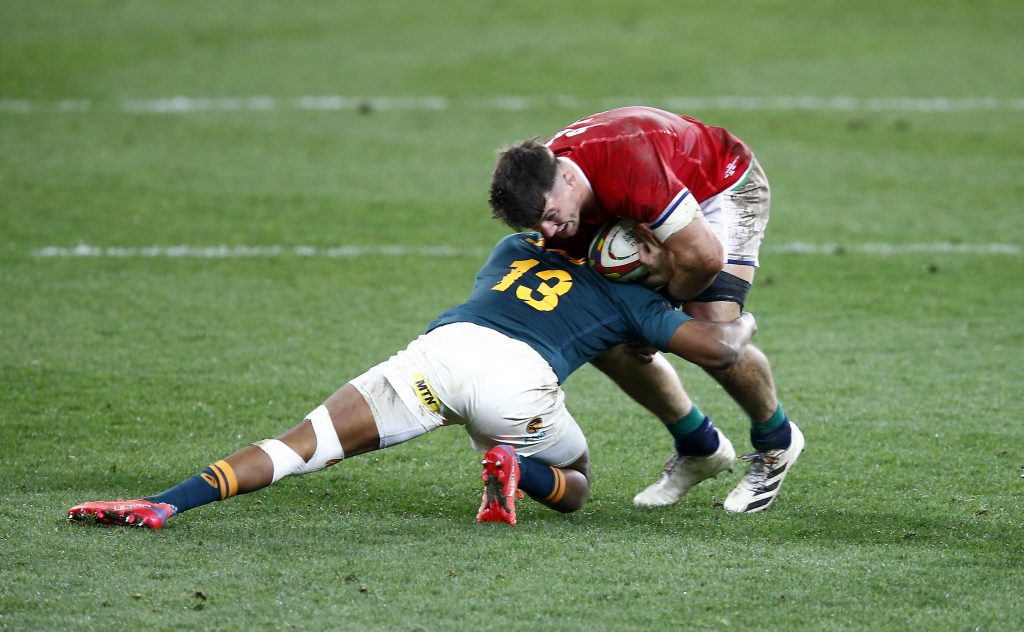 The Lions bench came on to close out an arm wrestle of a series opener with Farrell, who had replaced Biggar, slotting a 79th-minute penalty.

A predictably ferocious opening saw swarming breakdown work by both teams interrupted by persistent kicking and a savage tackle by Lukhanyo Am on Elliot Daly.

Already the Lions were looking to play more rugby as typified by Anthony Watson attempting to run the ball out from his own 22, while South Africa were content to kick, mostly through De Klerk. 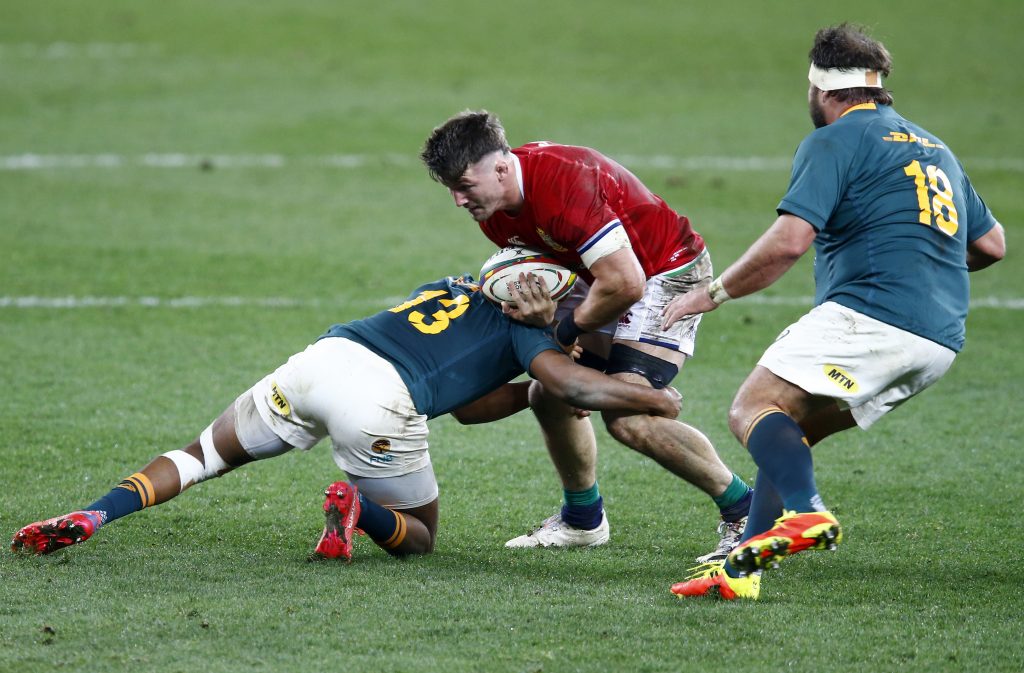 Pollard drew first blood with a penalty and when Tom Curry made a late tackle on De Klerk, he added another three points as an opening quarter controlled by the Springboks came to an end.

Rassie Erasmus, South Africa’s director of rugby, made his first appearance as a waterboy and soon after Biggar landed a penalty with the Lions benefiting from Maro Itoje’s predatory work at the breakdown.

But the tourists’ indiscipline was becoming a recurring problem as Pollard booted another six points to extend the lead to 12-3 while Biggar failed with a routine shot at goal. 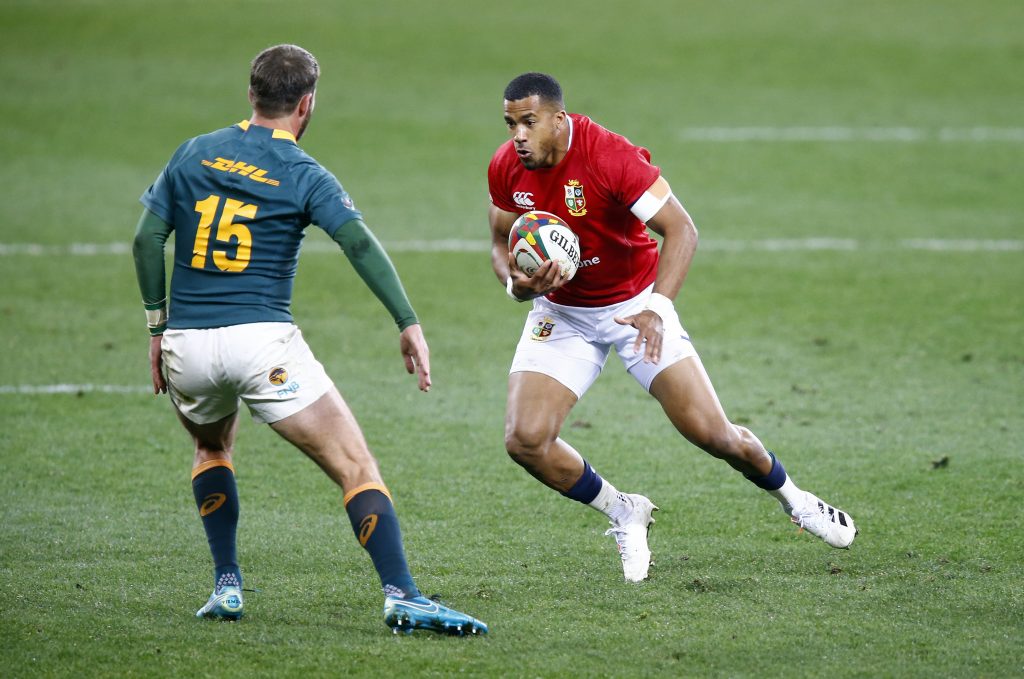 A tense first-half neared its conclusion with Daly just falling short with a long-range penalty attempt and the Lions’ hearts were in their mouths when Robbie Henshaw stepped through a gap in defence and raced upfield until Willie Le Roux arrived to tackle the Ireland centre.

South Africa changed their entire front row at half-time but when play restarted they came under immediate pressure as Alun Wyn Jones opted for the corner rather than taking the points.

The ambition paid off as the Lions constructed an unstoppable line-out maul that swept them over the whitewash with Cowan-Dickie touching down.

Le Roux had a try disallowed for a marginal offside call when Am kicked ahead but TMO Marius Jonker had no issue with De Klerk’s 50th-minute try.

Makazole Mapimpi and Pieter-Steph Du Toit were heavily involved as the Lions failed to capitalise on a wild pass by Pollard and De Klerk arrived to poach the try from close range.

PLAYER RATING: One down, two to go. Here's how we rated the Lions after a titanic arm-wrestle in Cape Town. #LionsRugby #LionsTour2021 #RSAvBIL https://t.co/tOu3djfoeq

But successive penalties by Biggar that punished the Springboks for repeatedly straying offside kept the Lions in the hunt.

The momentum had now swung totally towards the tourists and for the first time they were ahead courtesy of Biggar’s boot, setting up nail-biting climax.

Nerves frayed once more when only a Cheslin Kolbe knock-on saw a Damian De Allende try chalked off and it was Farrell who had the final say.