It’s widely accepted the All Blacks have a positional need to fill at second five, in terms of the variety of player types available to select from.

Under Steve Hansen, Sonny Bill Williams was almost always picked to play the Springboks when fit. His big frame at 1.91m and 108kg could handle the South African midfield, both in defence and attack.

This type of 12 is sorely lacking in New Zealand right now, as David Havili is more of skilled playmaking option and Quinn Tupaea is still cutting his teeth. While Ngani Laumape isn’t of Williams’ size, he possessed the type of power needed to bend back the defensive line of most defences.

The most experienced pair, Jack Goodhue and Anton Lienert-Brown, have also both been used at 12 and 13 but neither you would say are power running midfielders.

Against the most physical of tier-one defences, the likes of France, South Africa and England, the All Blacks don’t have a power option to call upon and this is where the need lies.

2021 showed they cannot expect to be successful trying to fit round pegs into square holes at second five, asking Havili to truck up carries by himself into top tier defences. It was a turnover party for the opposition in 2022 as set-piece launch after launch failed miserably.

Julain Savea, at 1.92m, has the type of frame of a 12 who can carry hard and bend a defensive line when needed. At his peak, ‘The Bus’ made a name for himself for running over people. At 31-years-old, he doesn’t need to completely sit people down, he just needs to carry hard enough to carry defenders over the gain line.

Is he completely out of the equation to be considered to provide what the All Blacks are missing?

While it may be a long shot to suggest Julian Savea will be picked to play for the All Blacks again, in the last twenty minutes against the Crusaders he had the opportunity to play at second five in a rejigged backline and impressed.

Peter Umaga-Jensen started the game at 12 as the Hurricanes are trying to find a way to play both Billy Proctor and Umaga-Jensen, who are both outside centres.

Umaga-Jensen is a brilliant supporting line runner and unfortunately that might count against him as a second five. The reason being he is not going to break the line much but his natural instinct is to try and make something happen.

Against the Crusaders the Hurricanes anchored much of their set-piece attack around the 12 as the primary playmaker. They gave Umaga-Jensen early ball from 10 and gave him options to overload the far side.

The first play resulted in an execution error, spilling the ball in contact, but we saw from this play the tendency to bounce slightly to the outside. Umaga-Jensen looked to hit the outside shoulder of Crusader first five Fergus Burke.

If you want to preserve space for the outside players, staying square is key. If the 12 and 13 are to tighten up the line, the angle from both has to be slightly against the grain, at least at the end of the run.

The second run is similar, a slight drift to the outside and some footwork to get on the outside shoulder. He is held up by Havili which disrupts the momentum, although the Hurricanes do get a penalty advantage.

Despite the slight drift in his line, he shaped to pass very early before trying some footwork and committing to the run. He did not consider the options out the back despite getting the picture that the Hurricanes wanted. Braydon Ennor (13) turned in, sitting on Du’Plessis Kirifi’s line. With four Hurricanes backs coming around the corner, the opportunity is on to use the numbers but Umaga-Jensen has not left his options open. He committed to the run way too early before ducking into the contact right when the pass out the back needed to be made. This is why Umaga-Jensen will need time to adjust playing at second five, particularly with plays built around the 12 like this.

A more compact, simpler approach is required that keeps his options open. There is less time to make decisions so keeping it simple, running with the ball in two hands and staying square is a necessity.

He is the designed playmaker on the play, not a line runner, although that is where his strengths lie. He needs to demonstrate some ball-playing ability moving forward to successfully move in one position.

It’s more of the same on the third attempt, although he busts through for a nice strong carry, he cramps the outside support by attacking the outside shoulder and doesn’t consider playing out the back.

Braydon Ennor (13) is again drawn into the line of the loose forward, this time Ardie Savea (8). 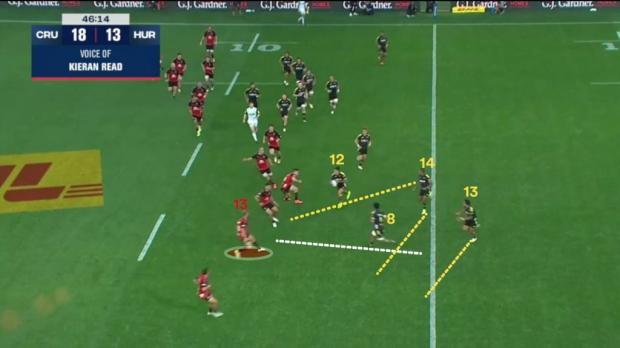 Ennor and Havili end up both covering Savea, a defensive mistake the Hurricanes did not take advantage of.

When Julian Savea moved into 12 to replace Umaga-Jensen, the first play called yielded a try to reserve back Bailyn Sullivan, who came on as the right wing.

This time the play was direct ball from halfback to second five from the lineout maul. Savea showed his distribution skills by staying square and whipping the ball wide early to his fullback Jordie Barrett.

Although it is Barrett that made something happen to create the try, Savea did what was required by keeping things simple and making an early decision to release the backs. They immediately profit.

Savea has shown glimpses of good ball-playing since his return to New Zealand that could suit his transition to 12. He isn’t looking to do it all himself and understands how to square up and commit bodies into contact to free up outside support runners.

He scored one of the Hurricanes’ three tries against the Crusaders, but also helped to create the space for the other two — in both of these sequences, he squares up just before the tackle and times his release of the ball perfectly: pic.twitter.com/dvaYx6WXJw

Yet as a crash running option, Savea still knows how to make the gain line to set up a decent platform which is missing from the All Blacks at 12.

Savea better suits what the Hurricanes are trying to achieve in attack at 12, while Umaga-Jensen is actually the better outside centre option. A Savea-Umaga-Jensen midfield combination would be intriguing.

At 31-years-old, Savea isn’t likely to make the All Blacks as a right winger, but he does present an interesting option if he is afforded the time to develop at 12, which fits a need they have.

The question is whether the Hurricanes are prepared to give him some starts, otherwise there will only be the odd cameo in the last twenty minutes or so. That won’t be enough to force consideration into the All Blacks.

To make it back into the All Blacks as a second five there are other areas that Savea needs to address, such as defence. This simply cannot happen at international level if he is to be a candidate:

Although he was defending in the first five channel here, there will be frequent traffic and multiple reads required of him at the next level as a midfielder.

He can’t get beat one-on-one all ends up, which is why he needs the time at 12 for the Hurricanes during the season to prove he is up to it because he has the ability on the other side of the ball to provide something they are missing.

If the Hurricanes continue to use him as a second five late in games, it will be interesting to track his progress as the season goes on.