Why they converted Manny Iyogun Next
Back

Exeter marched into their first Heineken Champions Cup semi-final after beating Northampton 38-15 at Sandy Park. The Chiefs will host French heavyweights Toulouse, who are chasing a record fifth European title, in Devon next Saturday.

Northampton fielded 19-year-old Manny Iyogun at loosehead prop after injuries sidelined four other players in that position, and they trailed by only four points at half-time following captain Teimana Harrison’s try and a Dan Biggar conversion and penalty.

Iyogun impressively played 72 minutes as Northampton boss Chris Boyd opted not to use emergency loan signing Alex Seville, who only linked up with his team-mates on Friday, until the closing stages.

Toulouse, though, are likely to test them like no other team in this season’s tournament, with a place in next month’s final at stake against Champions Cup holders Saracens or Racing 92. 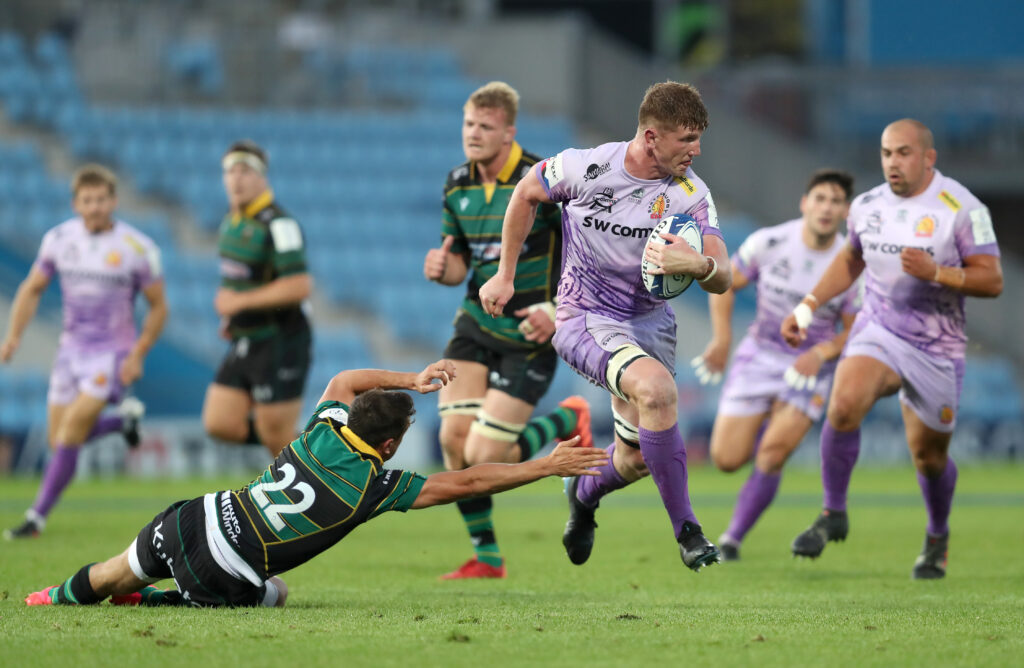 Exeter included centre Ian Whitten for his 50th Champions Cup appearance, while Tom O’Flaherty returned on the wing after injury.

Northampton’s well-chronicled front-row problems meant that Iyogun started and Seville – on loan from Gloucester – was among the replacements as Saints lined up for their ninth European Cup quarter-final.

England head coach Eddie Jones looked on as Exeter, 31 points above Northampton in the Premiership, fell behind to a seventh-minute Biggar penalty. 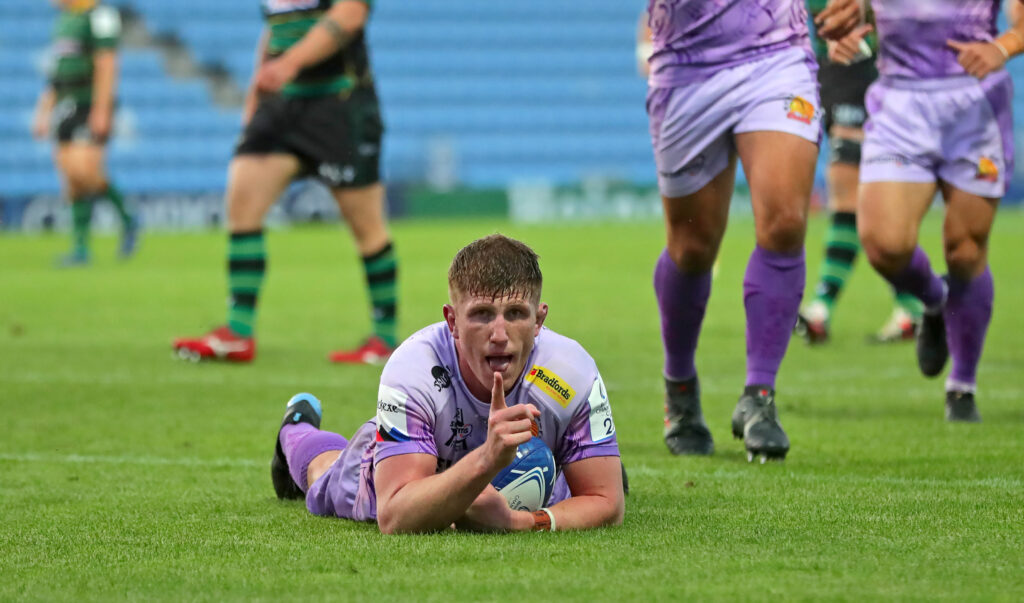 It rounded off a sustained spell of Saints pressure, which included an attacking scrum after Nowell was tackled behind his own line.

Northampton’s scrum held up well early on, and it took Exeter 17 minutes to launch an attack – from which they promptly scored.

England centre Henry Slade stepped inside his opposite number Dingwall, taking him clear of Saints’ defence, and he found Maunder in support, who finished off a razor-sharp move.

Simmonds kicked the conversion, and there was no let-up from Exeter as they started moving ominously through the gears. 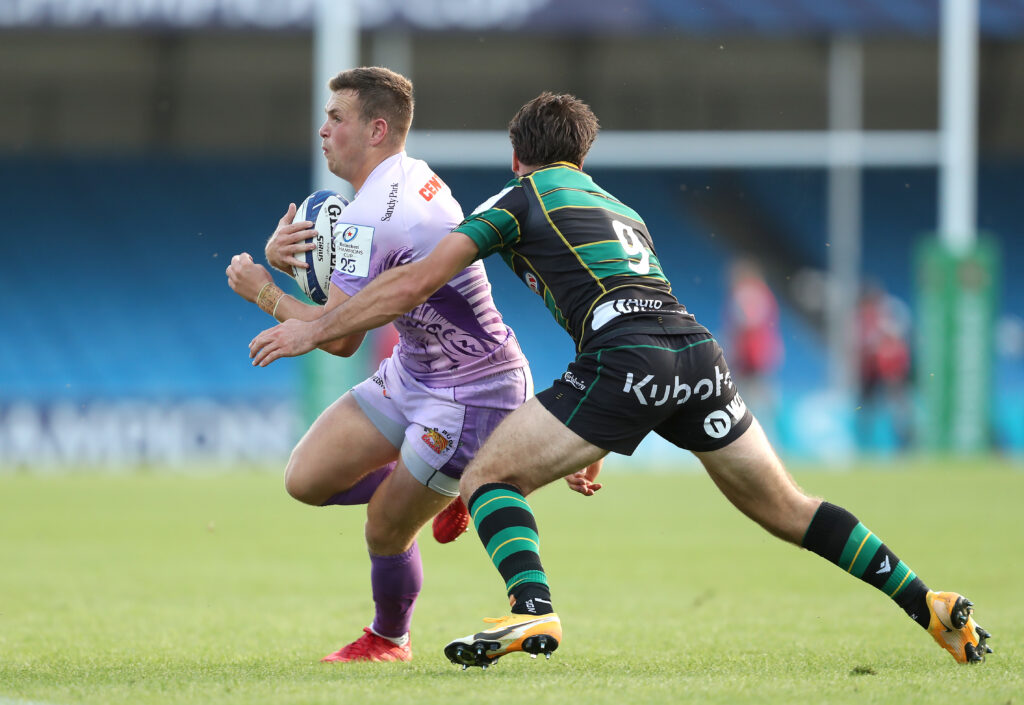 The Chiefs forwards found a ravenous appetite for the battle, and it was their relentless approach work that created a 25th-minute try from close range for Vermeulen that Simmonds converted to open an 11-point lead.

Alarm bells were ringing for the visitors, but they responded impressively and cut their deficit three minutes before half-time.

The Saints pack drove a close-range lineout, and it was Harrison who touched down, before Biggar converted from the touchline as Northampton ended an intense opening 40 minutes firmly back in contention. 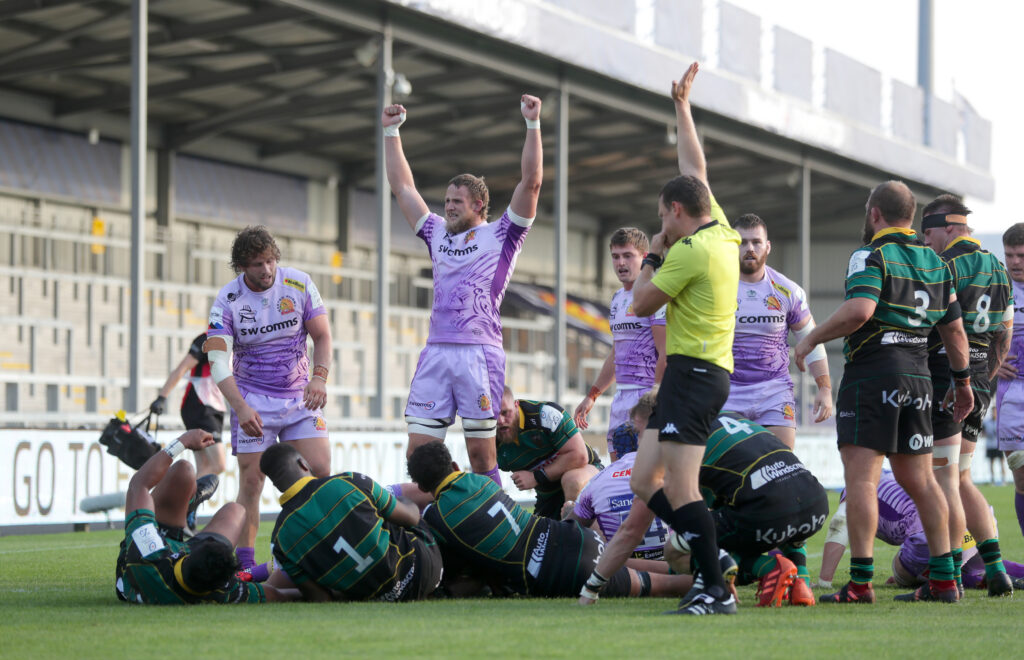 Exeter, though, restarted by flying out of the blocks, with Nowell shredding Northampton’s defence on a weaving 30-metre run that saw him claim his team’s third try, with Simmonds again converting.

Hill then crashed over from a metre out, but Northampton hit back when Dingwall picked a decisive attacking line and posted Saints’ second try.

Saints displayed admirable resilience, and they had a final quarter spell of territorial dominance before Exeter cleared the danger through a lengthy touch-finder by replacement scrum-half Sam Hidalgo-Clyne.

And Vermeulen capped a fine individual display with his second touchdown, as the Chiefs finished strongly.