END_OF_DOCUMENT_TOKEN_TO_BE_REPLACED

'Our supporters have been put through the ringer': Why Wallabies' tour was a success

END_OF_DOCUMENT_TOKEN_TO_BE_REPLACED

Sam Cane is not the right person to to be captain. Clarke should be tried at centre.

END_OF_DOCUMENT_TOKEN_TO_BE_REPLACED
'He should never captain the All Blacks again': NZ leadership guilty in numerous late collapses
A
Arie 3 hours ago

The 1999 semi-final against France was at Twickenham, not Cardiff

Analysis: Why this is the worst tactical kick in rugby and hurts every team that uses it

The basic premise of the territorial kick is trading possession for territory, giving the ball to the opposition but in a disadvantegous position in the field.

What qualifies as a ‘good’ kicking game has changed over the last 10 years as teams skew towards more contestable kicks at the expense of long-range drives that end up handing away possession easily for poor net gains.

The impact of poor kicking is rarely outlined and the players responsible aren’t universally criticised, yet the outcomes can be as adverse as knock-on’s or more visible errors, costing valuable field position or points, putting their own side in poor match situations.

What has become one of the worst kicks in rugby is the long hoof down the middle of the field, which achieves a lot of kick metres in the air but limited net gains as the opposition can often bring it back and set up play much closer.

Unless the kick is completed quickly after winning a turnover where the opposition has an empty backfield, it is usually a poor option.

The kicking team usually has no chance in regathering the ball, guaranteeing the opposition possession whilst they can regain a lot of the metres achieved through the air running it back on the ground.

Against the Crusaders, Bulls’ flyhalf Handre Pollard has possession on the edge of his own 22 following a kickoff and drives a long-range kick down the middle of the field. Pollard’s long kick finds David Havili after nearly a 50-metre gain through the air, down to about 33-metres out from the opposition tryline. On the face of it, it seems like a good kick. However, with a good carry or spreading the ball to the edge, the Crusaders could easily make back nearly 20-metres and set up play around halfway, taking back nearly half the territory easily.

From the 40-metre line Havili decides to return with his own kick, a contestable bomb of a shorter distance about 20-metres long with a supporting kick chaser. 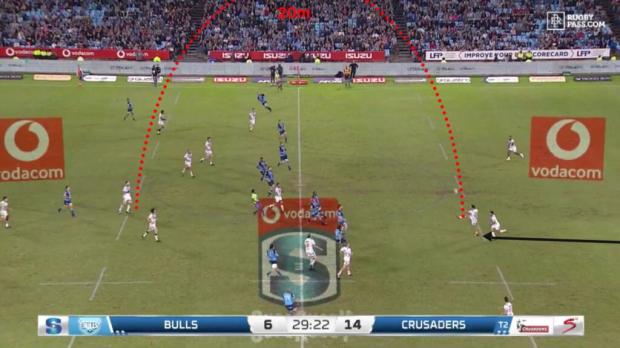 Havili wins the aerial contest regaining his own kick and sets up a Crusaders possession 40-metres out from the Bulls try line.

Pollard’s original kick ends up with a net gain of just 21-metres and hands the ball over to the opposition, a poor result.

The key difference is Pollard’s long kick had a 0% chance of being recovered with no aerial contest possible whilst Havili’s counter bomb had a decent 50% chance with a one-on-one aerial contest. A long kick was countered by a contestable one, and the Crusaders setup great attacking field position.

Aside from Havili’s return serve, the best case scenario for Pollard’s kick is the Crusaders’ kick returner coughs up the ball in a tackle around halfway (a low % outcome).

The most likely outcome is the Crusaders’ setting up a ruck on halfway and beginning to attack, with the Bulls trading possession for a 30-metre net gain on territory.

Here is the realisation most top sides have made – kicking to win a net gain of 30-metres with a 0% or extremely low chance of getting the ball back is an inferior option to kicking a contestable ball just 20-metres with a 50% chance of regaining possession.

Over time, you win a fair share of these opportunities whilst only foregoing about 10-metres of extra territory to do so.

The better original option for the Bulls from the edge of their own 22 would be to hoist a contestable box kick or bomb that would land around their own 40-m with a decent chance to get it back with a good kick-chase.

In this situation, the Bulls did have a chance to get the ball back around the 40-m line on Havili’s return kick, but it was an unplanned aerial contest with their halfback Andre Riaan Warner, instead of a specialist jumper that could’ve been planned on their own contestable kick.

The Bulls win a turnover less than a minute later and Pollard attempts the same long-driving kick landing in almost the exact same spot. George Bridge (11) picks up possession and senses the opportunity to counter-attack on the left edge where the Bulls have just three defenders across half the width of the field. Bridge slips the first defender’s tackle and wins back even more territory than the best-case scenario for the Bulls. Unfortunately for the home side, it ends up much more than that.

He links with Goodhue on the Bulls 40-metre line, and he continues the movement by finding Mitchell Dunshea who scores in the corner, the ultimate worst-case result for Pollard’s poor kick – conceding a kick return try. Against the All Blacks in November, Ben Youngs (9) from the safety of the 22 tries to go long but fails to find touch, keeping the ball in play. The ball finds Damian McKenzie (15) on the full next to the sideline, with no pressure, who finds Beauden Barrett (10) back towards the middle. The box illustrates where a potential contestable kick would have landed. Barrett finds a crease and gets upfield on the kick return, finding his way all way down to 45-metre out from England’s line, where a contest would have been yet the All Blacks didn’t have to, taking possession in the same position without having to compete for it. The next phase Damian McKenzie throws a ball around the corner to Ben Smith sparking a potential scoring opportunity but the last pass is missed.

This time Youngs doesn’t have the safety of the 22 but still sends it as long as possible, instead of kicking a contestable high ball for Jack Nowell. Liam Williams (15), one of the best aerial fullbacks in the game, catches the ball without any bother and is able to eat up the metres on the return. He ends up about only a metre in front of where a contestable kick would have been, and Wales have possession in good field position to attack from.

England are in the same defensive position they would be in had Youngs kicked shorter, but they don’t have the same opportunity to regain the ball.

Handre Pollard and Ben Youngs are both regarded as smart ‘tactical kickers’ yet use this kick, much like many others without realising it is poor strategically. Australian and South African Super Rugby sides also suffer from over-kicking long and giving up possession for limited net gains instead of continually competing for the ball with shorter kicks.

The bottom line – if the kick is not creating chances to compete for possession it is probably costing you.

Sean O’Brien ruled out of the World Cup: