When Ofa Tuungafasi was handed a red card in the 23rd minute of the Bledisloe Cup battle in Brisbane, the All Blacks should have adjusted their game plan to compensate for the fact they would be playing the rest of the match with just 14 men on the park.

Perhaps Sam Cane addressed his troops at the time, encouraging one of the looser teams in the world to tighten up their act, knowing that any mistakes in their own territory could be costly. For the remainder of the first half, the All Blacks appropriately doubled down on their kicking game – even when the ledger was evened up after Wallabies flanker Lachie Swinton was also given marching orders.

When the Bledisloe Cup holders emerged from the sheds after halftime, however, something appeared to have changed.

Ross Karl, James Parsons and Bryn Hall sit down and dissect all the key moments from Bledisloe IV. Did Hodge bring something unique? Will TJ Perenara start the next game? Were the Wallabies outside backs that good? All will be answered.

Ross Karl, James Parsons and Bryn Hall sit down and dissect all the key moments from Bledisloe IV. Did Hodge bring something unique? Will TJ Perenara start the next game? Were the Wallabies outside backs that good? All will be answered.

Yes, the one-man disadvantage was gone. In fact, for almost ten minutes at the start of the second stanza, New Zealand actually had more men on the park than their opposition, thanks to a Marika Koroibete yellow card in the dying moments of the first half.

Still, the biggest impact of losing a man isn’t the fact that you’re playing with fewer resources than your opposition – it’s that your opposition suddenly has more space to work with on the park. With just 14 players spread across the field, there are larger gaps in defence, which means tightening up play and holding onto the ball is essential – even if you’ve got a numbers advantage.

The one thing you absolutely shouldn’t do is try to attack from deep inside your own half, even though your opposition may also be a man down.

However, that’s exactly what happened on Saturday night.

Despite having less possession than in the victory in Sydney, the All Blacks actually made more runs in Brisbane and made fewer kicks. That on its own is not necessarily an inditement on New Zealand’s tactics – but the fact that Ian Foster’s men were trying to run the ball out more regularly from their own half, particularly in the second half, was a big blunder.

Territory fell hugely in Wallabies’ favour, particularly during the period when both sides were down to 14 men. While the overall territory figure was roughly fifty-fifty, NZ’s percentage dropped sharply to 34 percent in the second stanza.

Possession was also low for the All Blacks once Tuungafasi left the field – and when they did have the ball, they weren’t smart with how they used it.

The final stats (and potentially the result, too) was foreshadowed when both teams ran out from the sheds after halftime.

In a 30-second burst, the All Blacks played some incredibly dumb rugby deep inside their own half, all kicking off in the 45th minute.

After a relatively controlled period of play from the Wallabies, Nic White hoists the ball high from the base of the breakdown and flyhalf-for-the-day Beauden Barrett calmly leaps into the air to grab possession for New Zealand. ‘Calmy’ couldn’t be used to describe anything that happened in the following half-minute, however.

Barrett sets a breakdown on the 10-metre line inside NZ territory and as the ball bobbles out of the ruck, TJ Perenara spreads the ball to the midfield where prop Tyrel Lomax is waiting. Lomax fires a half-look pass in the direction of Rieko Ioane, but the ball goes nowhere near the wing, and he has to double back and retrieve the ball from inside the New Zealand 22 as Wallabies wing Tom Wright bears down. 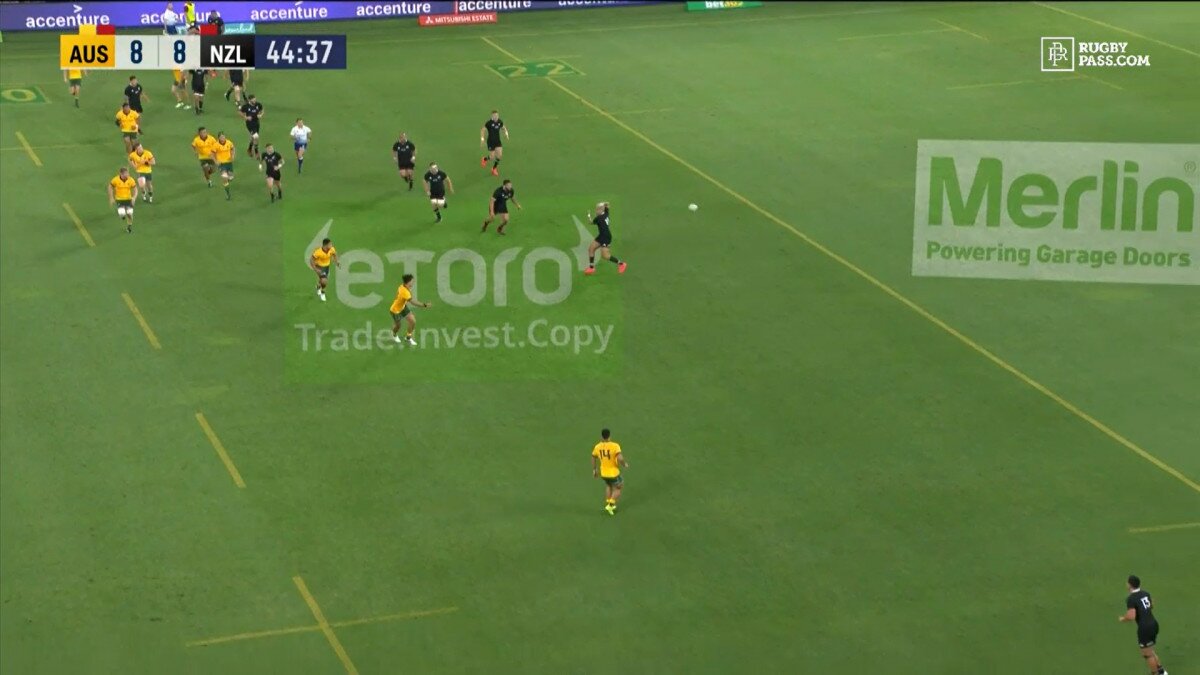 Ioane does incredibly well to fight his way up to the 22-metre line and give his teammates the opportunity to get back in support and find some structure. The structure never really comes, and Perenara delivers the ball to Barrett who attempts to run the ball out from the danger zone and split two Wallabies defenders. When he can’t get free of the tacklers’ grasps, Barrett flings the ball out the back, seemingly to brother Scott, but the pass instead goes to ground and youngest brother Jordie is forced to clean up the mess. 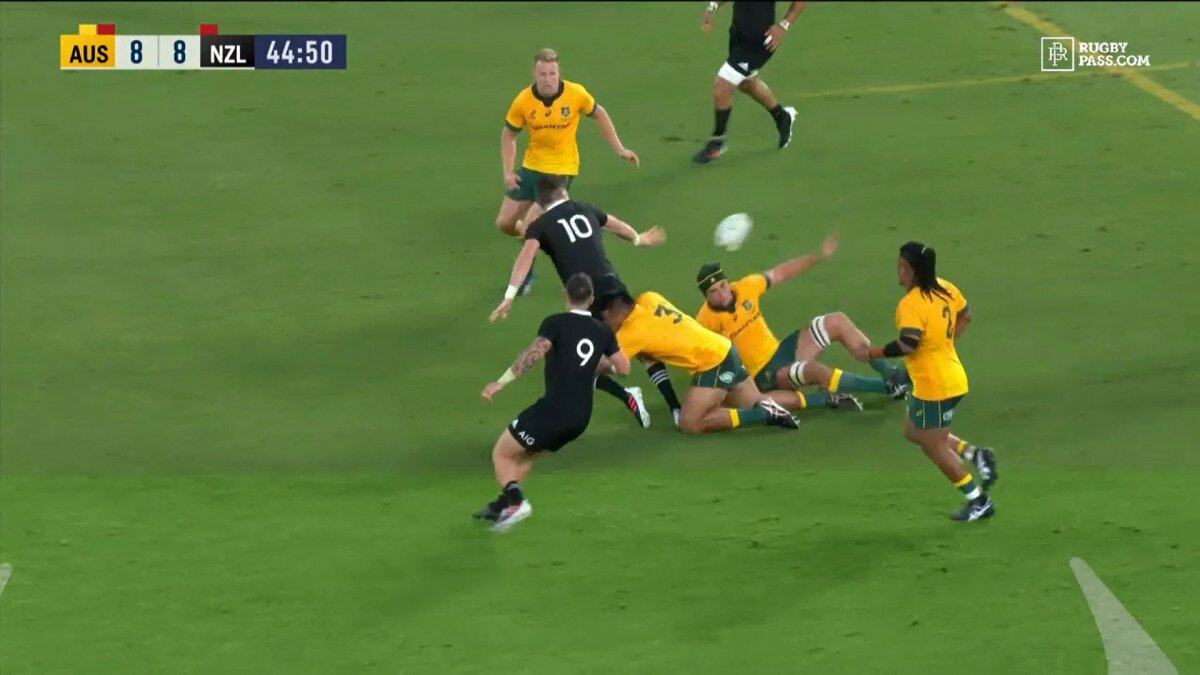 Twice in a row, the All Blacks have stuffed up inside their 22 – but they still don’t try and clear the ball with a kick.

Instead, Perenara sends the ball left to Ioane, who manages to break one tackle and then attempts to offload back to Perenara. The ball goes forward, however, and the scrappy period comes to an end when referee Nic Berry gets a call from the sideline and whistles a scrum.

Minutes later, Reece Hodge kicks a penalty to put the Wallabies 11-8 in front after Anton Lienert-Brown is caught offside.

It’s a diabolical string of phases from the All Blacks that likely never would have happened with cooler heads driving the team from the halves.

While an attack from deep within their own territory isn’t an unusual strategy from New Zealand, it’s a tactic that should have been shelved the moment they were reduced to 14 men.

One poorly executed escape attempt would have been tolerable, but Foster should have been livid with his charges – or possibly with himself – after the men in black took three bungled stabs at overplaying inside their own 22.

The game was always going to be a tight affair after the two red cards and handling the Wallabies prime attacking ball was a cardinal sin, hopefully never to be repeated again.

It wasn’t the only time during the match the All Blacks misplayed their hand, but it was the most glaring stuff-up and it characterised their general approach in the second half.

“The game kind of lost its shape with all the cards,” he said. “The Aussies adapted really well. They controlled the game through the forward pack and a lot of kicking off nine.

“We didn’t have the urgency and intensity in defence tonight. They played through us with their forwards and we were way too passive.”

Rugby is as much about decision-making as it is about skills and the All Blacks showed on Saturday that regardless of how talented their individual players may be, the direction still isn’t quite there.

The good news is that there’s no reason why Ian Foster can’t right the ship almost immediately – but it is something the new All Blacks head coach desperately needs to address in advance of the side’s next major challenge. It’s naturally incredibly difficult to win when you’re playing with a man down, but it’s even tougher when you don’t adjust your tactics to suit the disadvantage.

Hopefully, the All Blacks won’t make the same mistake again.

Ireland 11 under 5 caps Next