No more time for testing - so what is the All Blacks' preferred midfield combination?

We’ve finally reached the last week of the year before the 2019 Rugby World Cup kicks off.

Super Rugby is out of the way, the Rugby Championship has come and gone and the All Blacks have played their final non-World Cup test of the year, against Tonga.

Still, however, New Zealanders can have little certainty over which midfield combination the All Blacks will roll out in their opening match against the Springboks.

It’s been an ongoing issue for the last four years. The All Blacks have access to a quintet of players that would likely make any team competing at the 2019 competition in the form of Sonny Bill Williams, Ryan Crotty, Anton Lienert-Brown, Jack Goodhue and Ngani Laumape.

In 2019, Ma’a Nonu emerged as a possible contender for a spot in the squad and Matt Proctor was given a token Test cap against Japan last year. A few other handy players also floated in and out of the squad in the early stages of the current World Cup cycle.

Needless to say, New Zealand is blessed with centres.

That being said, for all the talent that the All Blacks have at their disposal, an experienced, Test-forged combination has still yet to really be established in the midfield.

Plenty of options in the centres

Consider the following table, which shows how many times each combination of New Zealand’s centres has started in the four years since the 2015 World Cup. 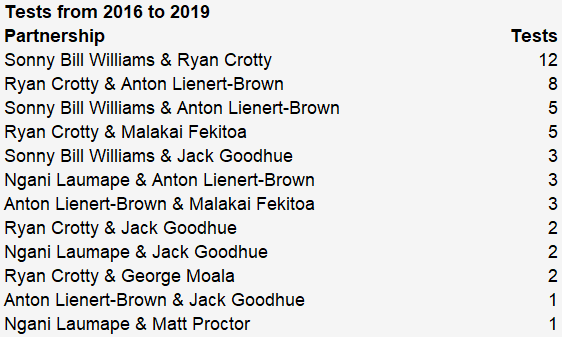 Steve Hansen and his fellow selectors have always leaned towards the combo of Sonny Bill Williams and Ryan Crotty.

Williams is one of the most damaging ball-players the All Blacks have at their disposal; his offloading game is still second-to-none and even if he can’t get his hands free in the tackle, he always commands the attention of at least two defenders. Still, there are rumours that Williams’ place in the World Cup squad was dependant on a big game in the third Bledisloe Cup match of 2019.

Crotty is a safe bet; there are few players in New Zealand that are so good at making the right decision – even though he may not possess the outright skills or power of some of the other midfield options.

Can Ryan Crotty and Sonny Bill Williams keep it together?

Crotty and Williams have partnered up 12 times since 2015 – but nine of those games came during the 2017 season. Last year, the two paired up just three times and Crotty has only made one appearance in 2019 due to injury, in the recent fixture against Tonga. That game saw him partner with Anton Lienert-Brown.

Therein lies the problem with this combination: having both Williams and Crotty fit and ready to play.

Earlier today there was speculation that Williams would return home to New Zealand due to ongoing injury issues. He spent most of the Super Rugby season on the sidelines with various ailments.

Crotty has also spent the Test season to date playing the waiting game after injuring his hand in the Super Rugby finals.

Crotty earned his first Test cap of the year against Tonga and managed 66 minutes on the park. It’s been a similar story for Williams, who played for 58 minutes against South Africa and 65 minutes against Australia.

Impact sub or chance for elevation?

Outside the first-choice pairing of Williams and Crotty, the next most likely combinations both favour Anton Lienert-Brown, who has been Mr Fix-It for the All Blacks in recent times.

Lienert-Brown, like Crotty, is comfortable in both the 12 and 13 jerseys but has spent most of his time at outside centre for New Zealand.

Despite not being a part of a nailed down combination, Lienert-Brown has made a number of appearances alongside both Crotty and Williams. The Chiefs midfielder has also been the All Blacks’ go-to man off the bench, making 18 appearances off the pine over the last four years.

Lienert-Brown’s quick-stepping and sleight of hand have caused many a problem for tiring defences late in matches but there still seems to be the perception that he can’t get the most out of these skills earlier in games.

“He doesn’t run lines that everyone else runs.”

That can make it a bit difficult for his teammates to run in support – but it also makes it very tough for opposing defences to set up against the former student of Christchurch Boys’ High School.

It’s Lienert-Brown’s all-round skillset that has seen him make 38 appearances for the All Blacks since his debut in 2016. That’s eight more matches than Crotty, who’s second on the list, and 18 more than Williams.

Jack Goodhue’s recent emergence has thrown a bit of a spanner in the works. Despite just a handful of caps to his name, Goodhue has looked unflustered on the international stage and there have been plenty of calls for the Northlander to usurp either Williams or Crotty in the starting line-up.

Goodhue debuted against France in June last year and played four matches on the trot – partnering Williams, Crotty and Ngani Laumape. He’s since also combined with Lienert-Brown in the starting midfield, but was only able to stay on the field for the first quarter of the match against Australia before suffering a hamstring injury.

Like Crotty and Williams, Goodhue has been somewhat unsighted on the international stage in 2019, clocking up just two games and only 98 minutes of play-time.

Wrecking-ball waiting in the wings

Ngani Laumape, the next cab off the ranks should injury strike the All Blacks’ current crop, has actually accrued more minutes for New Zealand in 2019 than three of the midfielders who are ranked ahead of him. The Hurricanes wrecking ball played the full match against Argentina and then came off the bench against Australia in the final two Bledisloe Cup games.

As a specialist 12, it was always going to be hard to fit the former League representative into the team, given the players available.

“It’s one of those positions where five doesn’t fit four,” said Steve Hansen at the All Blacks World Cup squad naming.

“Whoever we left out was going to be disappointed and probably deserved to be in the team.”

Still, with Crotty and Williams so injury-prone, it would not be a surprise to see Laumape called up to the squad before the tournament comes to a close.

Despite there being only a week until the All Blacks officially kick off their World Cup campaign, there’s still plenty of uncertainty surrounding the midfield.

There’s a long list of talented performers but there’s also a lack of proven combinations available – especially when compared to the last two World Cups where Ma’a Nonu and Conrad Smith suited up in the centres.

SBW is one of four current All Blacks from the 2011 team that have never tasted defeat at a World Cup. Will that experience be invaluable in Japan? ??#allblacks #rwc #rwcsquad #nzrugby #sbw #bluesrugby #counties #rugby #rugbyworldcup #rwcjapan

Do the All Blacks opt for the most established pairing of Sonny Bill Williams and Ryan Crotty until they succumb to inevitable injuries? Has Anton Lienert-Brown done enough to prove he should be starting for New Zealand, not just coming off the bench in the final quarter? Or could Jack Goodhue have catapulted his way into the side, despite having few caps to his name?

The All Blacks will be tackling Canada in the city of Oita next month – check out what’s on offer once the sun goes down: