Gregan: Jones is meticulous planner Next
Back
Super Rugby Aotearoa

It’s no coincidence that New Zealand derbies played under the roof of Forsyth Barr Stadium are often the most brutal, compelling and exciting fixtures to watch in Super Rugby.

That was certainly the case again on Saturday night, as the Chiefs held the Highlanders to a 31-31 draw in an enthralling encounter in Dunedin.

It’s a result that not only stunts the Highlanders’ mid-season comeback following a five-match winless run, but it also may just provide some hope for the Chiefs, whose campaign was on life support as they headed into this clash, languishing in 14th spot overall.

The derby quickly burst into life in the third minute thanks to a piercing run through the Chiefs’ defensive line by second-five Tei Walden.

His hard work was seemingly undone though, thanks to a shoddy offload by midfield partner Rob Thompson, which allowed Anton Lienert-Brown to hack the ball downfield along the turf in what looked to be a stunning 60 metre solo effort.

However, a brief check with the TMO showed that the All Blacks midfielder had swatted the ball free of Thompson’s grasp, initiating the knock on himself.

The Highlanders swiftly made the 24-year-old pay for his error just moments after the ensuing scrum on the Chiefs’ 10 metre mark.

A penalty from the ensuing scrum allowed Josh Ioane to put the Chiefs under pressure via his touch-finding boot, and he fully capitalised on the opportunity by drawing in and skinning McKenzie and Tumua Manu with some quality ball-playing from a close range lineout.

He converted his own try, but that didn’t stop the Chiefs from waving the white flag early on.

A deft inside ball from Michael Allardice to the barnstorming Tyler Ardron just inside the Chiefs’ own half allowed the Canadian utility forward to tear away into enemy territory after his teammates steered their way out from deep inside their own 22. 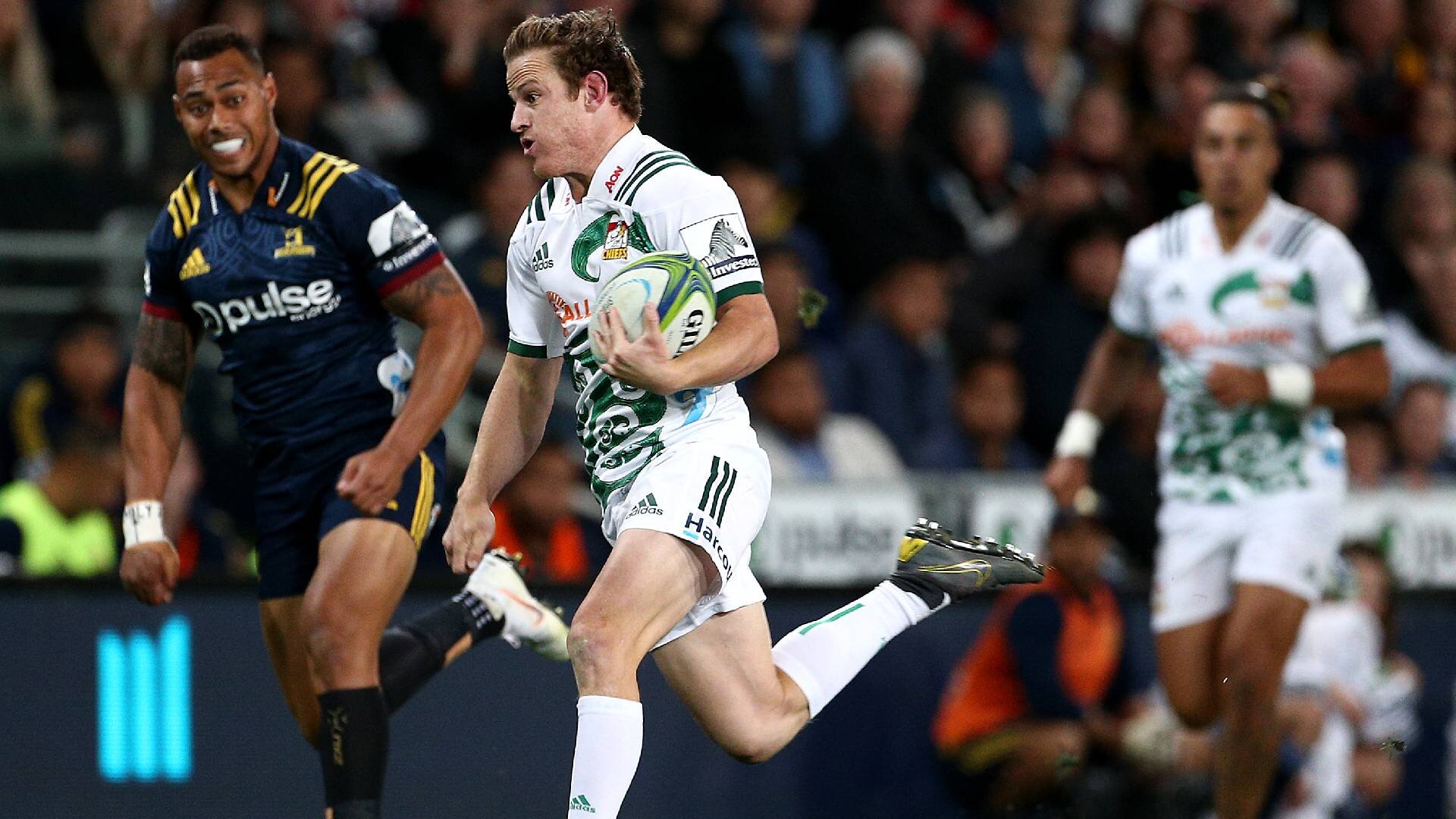 From there, a wonderful pass out to livewire halfback Brad Weber was enough for him to scoot over the tryline from 30 metres out to level the scoreline after just nine minutes of play.

The opening quarter of helter-skelter football didn’t stop there.

Tom Franklin was held up over the line after a long passage of sustained pressure by the Highlanders, but another extended sequence of play saw the hosts cross the tryline again not long afterwards.

This time it was co-captain Ben Smith, who instigated the attack back on his own 10 metre mark about 15 phases beforehand, that crashed over from the base of a ruck to score near the posts, putting a big dent in the Chiefs’ spirits in doing so.

It was a sublime display of continuity and persistence, and one that portrayed the Highlanders’ ability to sustain prolonged onslaughts of attack against Kiwi rivals, balancing out the opportunistic tries they picked up against the Blues in Dunedin two weeks ago.

Injuries in the Chiefs’ forward pack to Allardice and Lachlan Boshier could have derailed the Chiefs’ plans for a first half fight back, but the pure strength and determination of blindside flanker Luke Jacobson enough to get the away side back within touching distance.

A superb offload from Lienert-Brown found the hands of Manu, who bolted deep into the Highlanders’ half, but after Etene Nanai-Seturo was mowed down by Ben Smith just metres shy of the host’s tryline, Jacobson broke through a flurry of tackle attempts to dot down in the corner.

While it was the Chiefs who ended the first half strongly, it was the Highlanders who hit back right from the start of the second half.

Parked up inside the opposition’s 22 for the first five minutes of the second stanza, a few set pieces were repelled by the men in white.

They couldn’t fight off the brilliant interlinking play of Aaron and Ben Smith off the back of a five metre scrum though, which was enough to send wing Matt Faddes flying over out wide for his second try of the season.

For the first time in the match, the Highlanders crossed over for back-to-back five-pointers, with openside flanker James Lentjes cashing in on the breathtaking line break made by Ioane and the wicked long range passing of Aaron Smith to score in the left-hand corner. 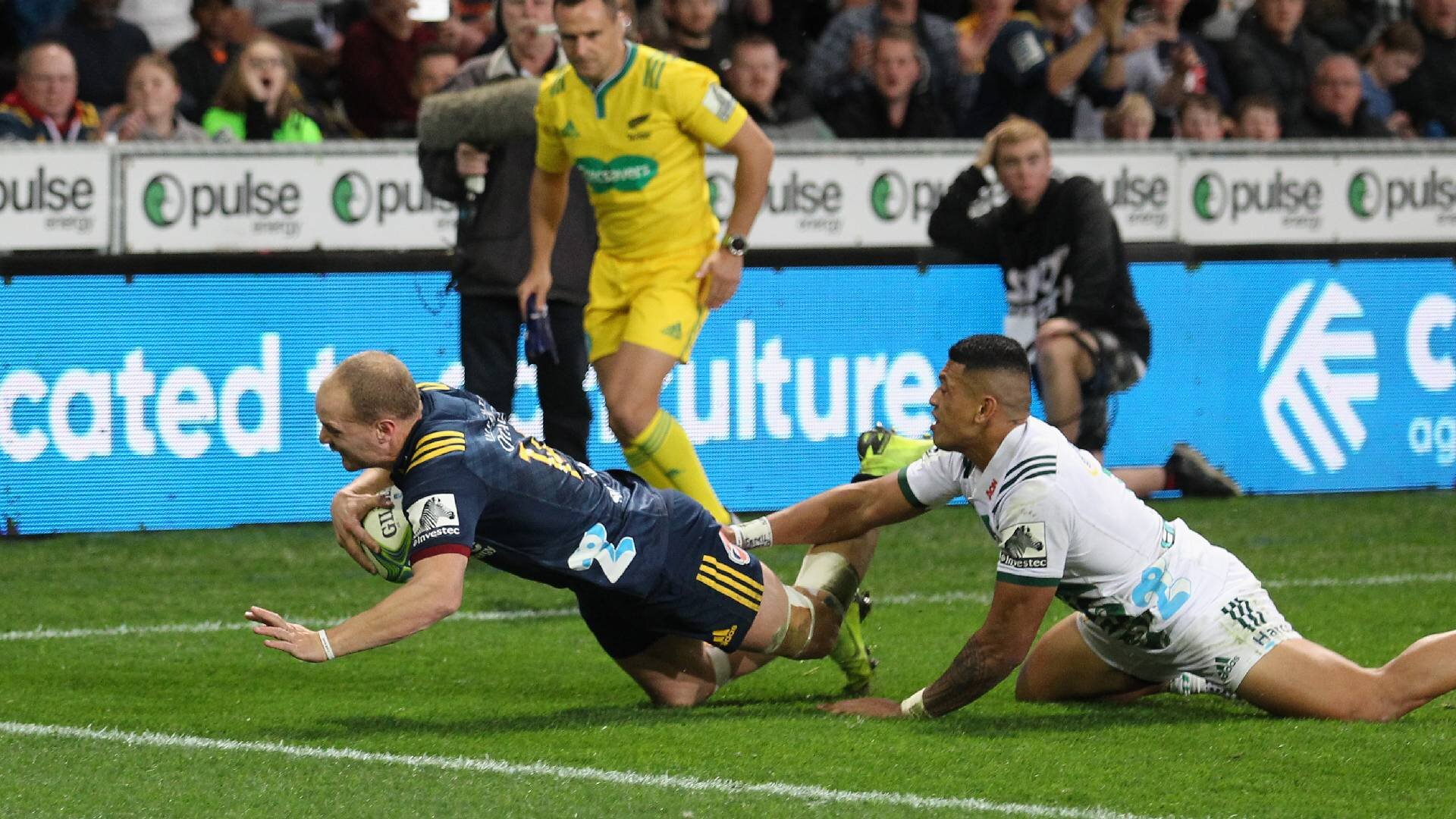 Ill-discipline cost the southerners not long after, with an Elliot Dixon infringement at the breakdown laying the platform for the Chiefs to strike from a lineout 20 metres out, which they did.

Brilliant option-taking and interchanging of possession between All Blacks front rowers Nathan Harris and Angus Ta’avao silenced the 14,802-strong crowd, with the latter bringing the game back in the balance with a try.

Some sloppiness began to creep into the Highlanders’ performance as head coach Aaron Mauger started to ring the changes, and that much was evident as the Chiefs ran in their fourth try.

Spectacular offloading between Jacobson, Lienert-Brown and Solomon Alaimalo created a severe mismatch on the blindside from about 40 metres out, and Ardron had an easy time of running in a converted try, which cut the deficit to just four points.

However, as the intensity of the contest escalated inside the final 10 minutes, Ardron began to feel it, as he gave away a penalty with just a handful of minutes to play for incorrectly joining a ruck, which was duly punished by Ioane’s boot.

Some desperation from the re-start by Luke Jacobson kickstarted one final hurl at the Highlanders’ tryline, and the Chiefs were rewarded for their perseverance with a rare brace of tries for Ta’avao right under the sticks.

A quick conversion by McKenzie gave both sides enough time to clinch a winning score with the score locked up at 31-all, but despite a lightning breakaway from replacement outside back Josh McKay, a miscued pass by Tevita Li to the supporting Jackson Hemopo brought the match to an end as the ball found the sideline.

The rapid encounter didn’t come without its casualties though, with Ben Smith coming from the field in obvious pain due to a hamstring strain sustained in a brutal collision with the ever-present Jacobson.

“He’s also got a laceration on his chin, so he’s just getting stitched up at the moment,” a disappointed Mauger told RugbyPass.

“We’ll know a bit more in the next couple of days.”

While it is unknown how significant the injury will be for both the Highlanders and the All Blacks, Mauger confirmed the availability of loose forward Liam Squire, who is yet to feature this year due to long-term knee and hip issues, for next week’s match against the Jaguares.

“He just typifies the hard work, and obviously his leadership is going to come. He’s got a big future as a Chief, and higher up.”

The result the Highlanders in fifth-place heading into their Jaguares clash, but could be overtaken by any one of the Brumbies, Blues, Waratahs, Stormers, Jaguares and/or Bulls this weekend, while the Chiefs remain in second-last place with 19 points.