Fans on Hansen-Erasmus war Next
Back
Rugby World Cup

World Cup 2019 will be quite a leap for Tommy Bowe. There’s nothing new in seeing former Test rugby players popping up on television screens. These old faces will be two a penny over coming weeks on TV stations across the globe.

However, Bowe will be appearing on the tube from a radically different perspective. He won’t be one answering questions. Instead he will be the one asking the questions in his role as anchorman for eir Sport, the channel tasked with showing all 48 matches from Japan live on Irish television.

It will be an onerous job. Bowe reckons he will be the hosting face for between 38 to 40 of those games and in readily confessing he is not much of a morning person, he will need to be on his toes to successfully steer the conversation along and keep the viewers entertained.

For sure, the 35-year-old’s nerves will be jangling. It’s only 30 months since he played his last Test match, a March 2017 Six Nations defeat for Ireland in Cardiff. However, having had a season fronting the Irish subscription station’s PRO14 coverage, he is now set to make a huge jump up the ranks and demonstrate he really does have what it takes to star in the studio.

“Presenting was something on my mind for a long time but when I was playing it was difficult,” he told RugbyPass ahead of an opening World Cup weekend where he will have no respite as he will hold the fort for all of the top matches.

“I did my documentary on retirement from rugby, did a body check documentary about six years ago that is now on the curriculum in Irish schools. At that time it was something that interested me so about a few years out from retirement I decided I was going to go down the presenting route and I screen tested for a holiday programme.

“I used three of my four weeks holidays from rugby to travel around and film, which was incredible. It got me really used to taking about climbing up a hill or talking about a cathedral in the south of France, just getting used to speaking to camera.

“Things like that were really helpful but to get into the PRO14 last year, I never would have dreamt I would get that role as quick as I did. But it was something I wanted to really grasp with both hands. I had to do quite a few screen tests for it. Then I got in and learned on the job. The World Cup, the guys at Eir were happy enough to give me this and to be the face of the coverage for Ireland for the World Cup, it’s just a dream come true. 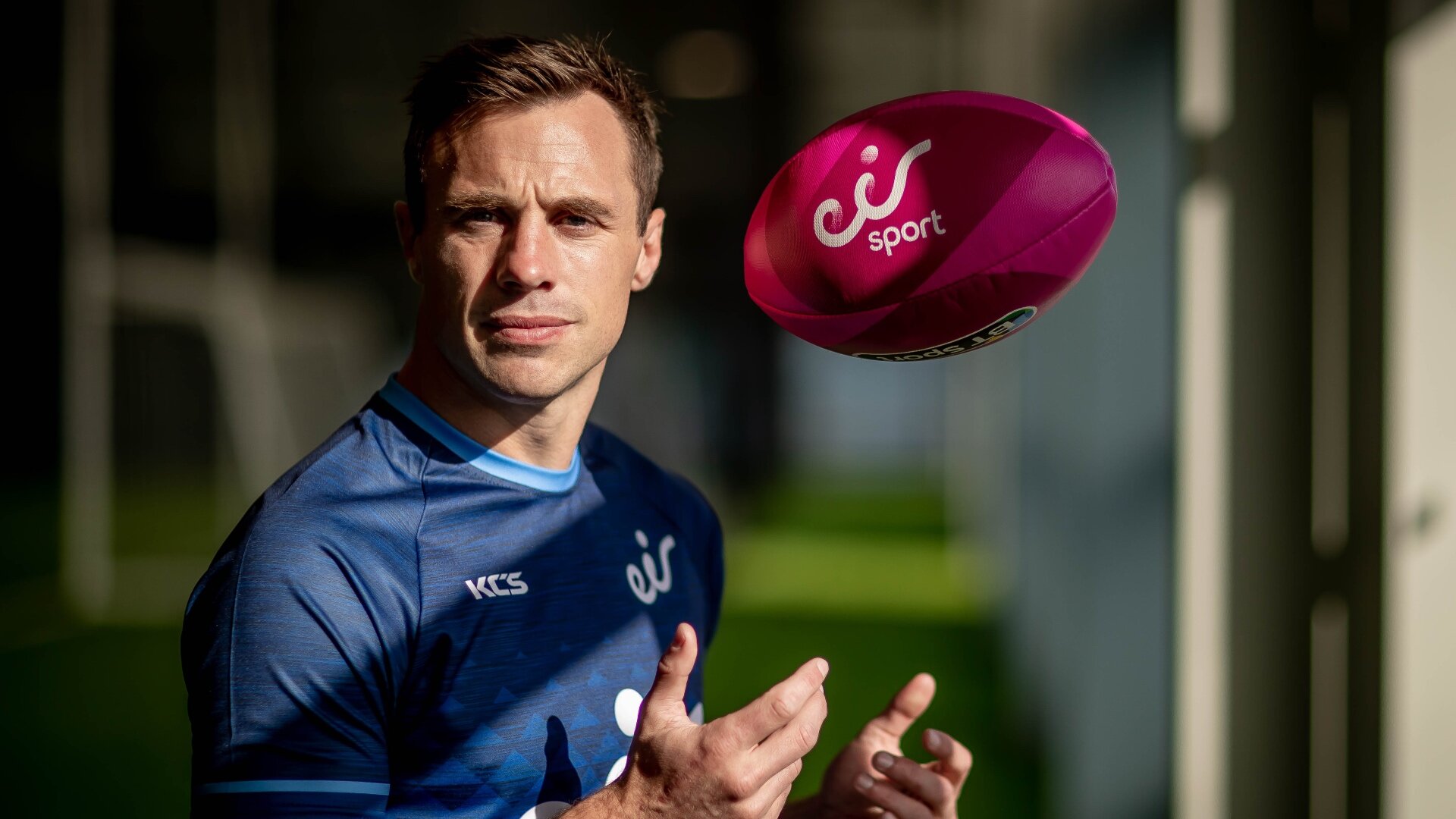 Crazy, too, is how Bowe’s new career as a World Cup TV presenter mirrors that of Brian Carney, the Sky Sports rugby league and GAA host who broke the former Ulster winger’s heart when chosen ahead of him in the Ireland squad for the 2007 World Cup.

Ireland are set to alter a third of the XV that started the warm-up win over Wales whey they take on Scotland on Sunday in Yokohamahttps://t.co/acLcE8VY84

Carney was the equivalent of Jean Kleyn, the current newcomer who has elbowed his way in front of the excluded Devin Toner for the 2019 finals, and while Bowe’s disappointment is now 12 years old, you get the sense that it’s gone but not forgotten.

“I watch him [Carney] every weekend on Sky. I remember rooming with him when we went on tour to Argentina a long time ago and he is a character, a very popular guy, and he is real good at it [TV]. I actually watched him and thought when he was first doing it, I can give that a rattle as well,” he said before offering insight to his 2007 rejection.

“I hear a lot of people talk now about Jean Kleyn. For me, it was Brian Carney, the rugby league winger that was brought in, and he went on the plane instead of me. At the time it was the biggest disappointment of my career and it really hit me hard. For two or three years leading up to that, I had always been part of a 30-man squad and then when it came to the crunch of a World Cup I was put out of it (by Eddie O’Sullivan), but I was really fortunate.

“I came back to Ulster and Mark McCall, the head coach at the time, pulled me aside, gave me a real pep talk and got me to use that opportunity to bring my game on, to think hard and long about what it was in my game that made me miss out on the World Cup.

“At that stage I was very early in my career, I was only early 20s. For Devin, he is one of the elder statesmen of the Ireland team and is a lot more experienced. He will be devastated, but it is still a good opportunity that he can still go to the World Cup given there could well be injuries.”

Disappointment in 2007 because the catalyst for eventual Lions pick Bowe to bounce back and go to successive World Cups in 2011 and 2015 with Ireland. Even then, it wasn’t without its stress. He played poorly in a warm-up game four years ago at Twickenham and feared the worst in the aftermath.

“You know on the Sunday you’re either going to get an email or a call and everyone dreads that phone call,” he said, remembering how Joe Schmidt goes about his business of running a Test squad. “I remember the Sunday before the last World Cup, it got to maybe eight o’clock, half-eight at night and I was refreshing my phone. I actually had to plug it in as it had gone dead, so you were just panicking.

“Then I actually got a phone call and it came up Joe IRFU and I remember looking at my wife and said ‘it’s Joe’ and I thought that was it. I played that England match and Dave Kearney was going well and I thought I was out. But Joe called me to tell me ‘you’re in but I had some pretty difficult conversations with some people I respect and let them know that they unfortunately weren’t going to make it. I need you to really step up, I need more from you in the next couple of weeks’.”

Will the 2018 World Player of the Year return to form in Japan? #irishrugby #irelandrugby #leinsterrugby #rwc #rugbyworldcup #rugbyworldcup2019

The jolt worked. “Joe is a very, very good operator in terms off bringing out the best in his players and sometimes I did need a bit of a kick up the ass. That was a huge reminder for me and it was a huge vote of confidence that he picked me to go.

“I didn’t play the first game against Canada but came on against Romania, scored two tries and on the whole didn’t have a bad World Cup, but it is a nerve-wracking time for those people who do get the phone call.

“Your heart sinks when you see his name coming up on the screen. It’s horrible. Even for the guys getting the emails. Chatting to Rory Best, the other week was the first time he got to see the itinerary of what they are doing in Japan, where there are going, where they are staying. Everyone was really kept in the dark until that email came through.”

From sushi with @ShaneWilliams11 to an insider guide to the do's and don'ts of hugging in Japan… ??

From what he has heard in recent weeks, the soon-to-depart Schmidt has loosened the leash on how he governs his squad. One of the biggest criticisms of Ireland’s failure to move past the quarter-finals four years ago was that their players didn’t feel they could ever switch off from the job. The environment was much too tense, but that appears to have changed for Japan.

“For this cycle I know they have been trying to let the players switch off after six o’clock in the evening and take that off because they are going to be together for such a long time,” he revealed. “From first thing in the morning right through until about six o’clock they will be busy and then the players are encouraged to switch off and have a bit of down time whereas in the past six o’clock would be when you would be just turning on the computers to do a bit of video analysis.

“Stuff like that is very important as a World Cup can become all-consuming, particularly when you’re going to a country like Japan where is it very different, the food, the sleeping arrangements, everything. You have to be able to feel comfortable and to be able to switch off and that is something they have learned from the 2015 World Cup.

“Hopefully it will all now come down to that quarter-final (against South Africa or New Zealand). That is what they will be focused on. We have to beat Scotland first, that is a huge game, but from there it’s about that quarter-final, so any small changes that have been made will help.”

Ireland have never got beyond the quarter-finals in the past eight World Cups, so reaching the last four would be a massive shattering of the glass ceiling that has existed since 1987. The desired breakthrough would be something to savour, with Bowe even allowing himself some time to wonder what his reaction just might be on live TV.

“If something like that happens, that is the beauty of live television, it would be unbelievable, the emotion would just come out of you,” he enthused. “I couldn’t even describe what type of feelings I would have but something like that, the pictures almost sell it more than actually saying things.

“It will be for me just a case of let the pictures sell it and the reaction of the guys who are there with me. If we make it to that semi-final it then opens up for potentially go all the way, so it’s a really exciting time to be part of eir Sport, going into a World Cup with Ireland as the No1-ranked team in the world with a genuine chance to actually go and win the competition. It’s something I don’t know how I feel I would react if it happens.”

WATCH: The trailer for the RugbyPass behind the scenes documentary on Tonga’s preparations for the World Cup