Analysis: The tactic Japan used at the World Cup that showed how to unlock Rush Defence

South Africa’s high-pressure rush defence became a hallmark of their Rugby World Cup victory. Cutting off the opposition’s outside backs with wingers and centres jamming in, sending Pieter-Steph Du Toit to hunt down decision-makers and letting Faf de Klerk run wild became the foundation of one of the best defences in rugby history.

But it wasn’t just South Africa that has become an amazing defensive side in recent years. The top teams have all gone through periods of sustaining incredible defences that have, for the most part, throttled attacking play.

At the same time, modern play with ball-in-hand has reached a saturation point with attacking phase play more predictable than ever before.

Most patterns outside of multi-phase launches are made to play the same way over and over to thin the edge and teams have been guilty of becoming robotic in the safety of structure.

Defences have cottoned on and are adjusting to the aligned pattern. If you carry off 9 with pods, that is where the line speed will be at its fiercest. If you continually play pods off 10 to the middle then you’ll face similarly fierce resolve.

As the All Blacks found out with their new ‘flush’ pattern to take the ball outside the pressure zone close to the ruck, the rush defence adjusted and started coming up the middle quite quickly in anticipation of the central pod getting the carry from Beauden Barrett or Richie Mo’unga.

Even with the edge stretched, the ball could not reach the space out wide as opposition ‘rolled the dice’ with outside backs shooting up. The predictability of the pattern in part led to its downfall.

Against England in the final twenty minutes of the semi-final was the purest example of this as the All Blacks repeatedly tried to get the ball wide by the same means but continually lost ground. When building the same way over and over again to thin the edge isn’t working, there needs to be a conscious recognition of that and a further plan to become more concentrated. Attack needs to change on the run, adapt with fluidity as Conor Wilson pointed out.

Ultimately, teams will have to learn to flow between even more styles, more patterns and schemes continually moving toward the complexity of an NFL playbook in order to counteract the evolving defences.

Every set-piece is a chance to change up the operating structure and adapt on the fly, which is going to require increased levels of shared understanding across the team.

One solution to unlock the rush defence that some teams have used sparingly but still offers potential lies in waves of attack becoming narrow, constantly funneling ball carriers back towards the pillar defence of the ruck in ‘Blitzkreig’ fashion, becoming an arrowhead attack that aims to create a weak spot through sustained pressure on the same spot.

If you are trying to break through a brick wall, the best way through is to hammer the same spot over and over until you get a crack – and then keep going until that crack becomes a chasm. You don’t continually move around, hitting different places in the wall.

The pillar defence around the ruck presents the perfect target for repeated waves of attack.

New Zealand has two players that use ‘unconventional’ running lines. Damian McKenzie and Anton Lienert-Brown often look like kids playing under-9 rugby by changing direction and running across the field against the grain away from the pressure – but there’s method to the madness.

Whilst not textbook play, they often unintentionally find the ‘seam’ the pillar defence presents. This ‘seam’ can also be attacked in other ways if you don’t have a player like McKenzie or Lienert-Brown on your team. 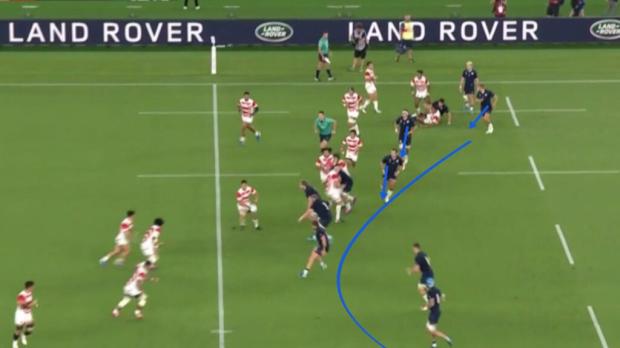 When the defensive line presses forward in a staggered fashion, the pillar defence will often be the last to come forward and then push out, chasing the ball leaving space next to the ruck.

This area of the defence is a weak spot and often has players on the ground from both sides that offer opportunities to use as screens.

A defender on the ground cannot make a tackle so there will be extra onus on the players around the ruck to work harder to get up if play is funneled back that way. Forcing those same players to get up, again and again and tiring them out will eventually create cracks. One of the most under-utilised attacking tools today is the switch pass, cutting back to change direction on the run.

The pillar defence is prime for hitting with deep switch-passes. One of the more interesting plays this year was this deep-switch play by South Africa during the Rugby Championship.

The Springboks have run a miss-2 from the scrum on the left side of the field to set up a wide ruck with centre Luhkanyo Am taking the tackle near the 15-metre tramline, setting the below pre-planned play.

The Springboks run a switch off Handre Pollard with a pod of forwards underneath him heading back towards the ruck. The All Blacks’ ruck defence is not great to start with, with Matt Todd (7) the only loose forward to get to the ruck from the scrum, stationed behind it.

TJ Perenara (9), the usual sweeper, fills the front line leaving the All Blacks with no second-line defence. The defence came forward in anticipation of a carry but the switch sends play towards the ‘seam’. We see the staggered pillar defence forming between Perenara-Todd-Ioane.

Ioane came from the opposite side of the ruck to cover and the All Blacks are lucky that he did.

The deep-switch pass to Franco Mostert (5) forces all these defenders to get involved and each man is drawn into contact, with Duane Vermeulen (8) finally brought down with the ball. 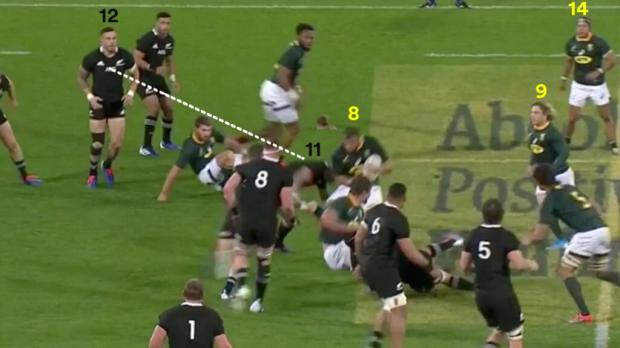 Between the final man, Rieko Ioane, who made the tackle on Vermeulen (8), and the next man, Sonny Bill Williams (12), who just got up off the floor, is a wide gap begging for a player with speed like Faf De Klerk (9) or Cheslin Kolbe (14) to take another pass at pace off Vermeulen.

With the halfback sweeper already out of the play, the Springboks could have opened up a huge break and reached the third line of defence with one more pass.

Taking this kind of concept from a set-piece play from the Exeter Chiefs and applying it off a ruck, the halfback can be fed a return ball into this space.

Now imagine that the pillar defender on the opposite side of the ruck was not Rieko Ioane and was a much slower tight five forward, which is often the case. That’s exactly what happened when New Zealand and Wales played off for the bronze medal at the World Cup.

The All Blacks switch play back into the pillar defence off a halfback run to the right side.

Beauden Barrett one-on-one in the hole with prop Dillon Lewis (3) is a mismatch, forcing the next inside defender, loosehead prop Nicky Smith (1), to cover once Lewis is beaten. Smith (1) is not expecting to be required on the play, taking a short breather on the other side which opens the gap wider for Barrett when Aaron Smith (9) pulls two defenders, Lewis and lock Adam Beard (4), across the ruck with his sniping run.

Defenders on the opposite side of the ruck are used to switching off due to play continually going the same way.

The All Blacks got quick ball from a strong carry in this situation, which could potentially be achieved by running pick-and-go’s to build momentum and weaken the defence around the ruck.

Imagine the attacking side continually running deep switches off 10 or pods back towards the pillars, pick-and-go’s or switches off halfback runs as part of a pistons-attack that continually targets the ruck defence phase-after-phase, going left-right-left and funneling play down the same narrow space.

Using power runners, agile speed athletes and forwards with offloading skills, this kind of funnel attack can wear down the opposition with a concentrated assault until the dam breaks, completely nullifying line speed and turning it against them.

Japan started to use this type of ‘funnel’ attack from set-piece platforms during the World Cup, often bringing wingers in for carries into the ruck pillar defence on phases two and three after a midfield crash ball. The attacked the same place in the defensive line over and over, achieving gain line wins right down to the goal line before spreading wide and scoring their game-winning try against Ireland.

The key is not to move only into this type of attacking play and become predictable once again, but add it to the arsenal to create multiple methods to switch in and out of during games to counteract what the defence is doing. If teams drastically increase the percentage of switch passes used during phase play, it brings another sense of unpredictability that keeps the defense guessing that is missing.

Aggressive line speed creates seams next to rucks that can be exploited by switch plays but many teams haven’t thought creatively enough about how to do it.

Combined with ‘Funnel’ attacks – concentrated periods of targetted phases at the pillar defence using all the aforementioned methods – could be the counter-balancing attacking evolution to break down ‘brick wall’ defences that some of the best sides have been able to build.

Target that wall in one spot consistently to weaken it and you may see it come crashing down.

The best of fans at the Rugby World Cup: