END_OF_DOCUMENT_TOKEN_TO_BE_REPLACED

It’s been a long eight months for the All Blacks to reflect on their November tour of last year, where on a historic night in Dublin they were conquered by Ireland for just the second time in history.

The Irish loss was an unusual All Blacks performance in some ways. In the wash-up, hooker Dane Coles emphasized that ‘there needs to be balance’ between playing what is in front of you and structure, suggesting that the All Blacks’ game plan left them somewhat restricted.

Fast forward to the first All Blacks test of 2019 and it seems as if lessons from that night are shaping some new ideas on the eve of the World Cup. It seems the All Blacks have found new structures to not only combat aggressive line speed tactics but expose them.

Out with the old

The All Blacks opening performance of the season was based more on defense than attack, out-tackling the home side 154 to 98 as the Argentinians took the majority of possession.

However, in the brief moments they had the ball for extended play, they frequently aligned in a new structure designed to create faster width and attack the developing weak spot in today’s modern rush defences.

It appears the All Blacks have abolished the old pod system used over the last few years in favour of this new one. Typically in this situation coming back from the sideline, you would expect to see a pod of three forwards carrying off 9 and attempting to set up the next ruck around 15-metres in (box marked ‘R’).

Against Argentina, the All Blacks played with two-forwards acting as flat options on ‘clear out lines’ to hold the inside defence while the ball goes out the back to Beauden Barrett (10) from Aaron Smith (9). Barrett now can hit any one of the three front-line forwards in the second pod to set up a midfield carry to stretch the next ruck far wider than the old 1-3-3-1 system.

He usually has to wait until the second phase to get this situation but now it can be done in one phase.

With line-speed becoming so adopted globally to hammer pod runners off 9, the intention of this structure is to move the ball away from the pressure spot usually brought by the third and fourth rush defenders and target the disconnection that develops a little wider, where the defence is not bringing numbers forward as aggressively. Barrett selects the widest option Ardie Savea (8), outside the most threatening rush defender, where Argentina’s line is so staggered they are now under pressure themselves to close down the play.

Savea has space to carry and massive lanes developing outside of him to feed a potential tip runner. If an outside back is running a support line off Savea, a line break is a highly likely outcome.

The All Blacks ran the two-man ‘clear out’ pod all day, using Aaron Smith’s crisp long pass to play wider. This new system gave Barrett and others filling in at first receiver more time and space as the flat ‘clearing pod’ kept the line flatfooted. 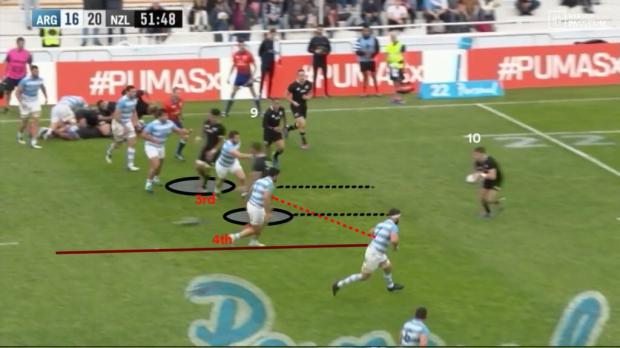 On this occasion, Barrett has the ball outside Argentina’s primary rusher (third) and a one-on-one matchup developing with an isolated prop (fourth). The All Blacks flyhalf skips around a diving tackle and breaks into the open field. Again Argentina’s line is staggered outside the fourth defender and the disconnection is clear between Marcos Kremer (7) and Pablo Matera (6). Argentina is continually opened up outside the fourth defender by the use of the clearing pod. Here the chasm developing outside the fourth defender, reserve prop Santiago Medrano, is massive and not what you want to give speedster Beauden Barrett. He breaks the line again but his pass to support runner Sam Cane is knocked on. Key to the success of this structure is Aaron Smith’s footwork, decision-making, and obviously long passing ability.

The All Blacks have him ‘taxiing’ off nearly every ruck, getting him on the run, offering the threat of a snipe but also extending the width of his pass. If he can steal an extra few metres sideways, that’s an extra few metres he can whip the long ball to get outside the fourth defender.

If he ever needs to hit the flat forward runner, they will end up close to the previous ruck where another forward can reload and assist. If he picks the right moment, that hard running forward should find half a gap, the gain line and the ability to buy some time.

If the interior defence isn’t set properly, there is always the chance to attack in close quarters using a lurking fullback/wing. The All Blacks had two ‘flexible’ wings, allowing Sevu Reece (14) and Jordie Barrett (11) to float and find work off their respective flanks so this play is always a possibility. Barrett’s versatility as a midfielder/fullback gave him other responsibilities too, while Reece was used in a similar fashion to his role at the Crusaders roaming all over the park in search of explosive plays.

Smith sees Argentina have serious problems covering space in close and with Reece in his back pocket, calls for a pet ruck play. Taxiing off the ruck Smith commits the ‘A’ defender and pops a short ball to Reece coming around the corner.

The next closest defender, Tomas Lavanini, is gassed with his hands on his hips. He makes a late diving attempt but is shaken off by Reece streaking away downfield. The All Blacks created 10 clean breaks to Argentina’s three, but left plenty of points on the table by not finding a way to finish and generally were too ill-disciplined to keep the ball for longer periods.

However, their new structure based around a ‘taxiing’ halfback and clearing pod was largely a success, with many other opportunities left begging in the limited time they had the ball. It was identified earlier during the Six Nations that teams would need to figure out a way to counter the dominant rush defence of teams like England. One solution was to move unutilised players such as the winger from the blind side over as tip running option outside the pod to target this vulnerability in the staggered line.

The All Blacks have come up with their own answer solving the same problem.

Their system is exactly what is required to ‘play around’ England’s dominant defence, a way to basically scheme the Tom Curry’s, Vunipola’s, Eben Etzebeth’s and Pieter-Steph Du Toit’s out of the game and they have the perfect weapon in Aaron Smith to do it.

The best passer in the game could prove again that skill can trump brawn by ‘changing’ the game at the 11th hour before the World Cup.