Few teams will garner the support of the neutral as much as Fiji at the upcoming Rugby World Cup, with the Pacific island nation rooted for not only as an underdog, but also their aesthetically pleasing style and approach to the game.

Twice before have Fiji progressed to the knockout rounds of rugby’s showpiece event, first in the inaugural tournament in 1987, before again making the quarter-finals in the 2007 edition. There were no such celebrations four years ago in England, however, as John McKee’s side picked up just one win and finished fourth in their pool, a pool that is not too different to the one they face in Japan over the next month.

Once again, Fiji will find themselves coming face-to-face with Australia, Wales and Uruguay, with the only difference from their pool in 2015 being that England have been replaced by Georgia. On the surface, that is something which should help Fiji’s chances of upsetting the odds and going one step further than they did in 2015.

“We get a puncher’s chance in World Cups, because we’re together for 12 weeks before the tournament, as opposed to five days before the first November international” says Geoff Webster, Fiji’s General Manager.

“We certainly go into this World Cup as the best prepared Flying Fijian team ever. We put a lot of resourcing behind it and we’ve got a very strong coaching staff and a world class S&C group.

“The challenge for us is whether our 12 weeks of preparation, and the improvement in cohesion we can build over that time, is enough to bridge the gap to where teams like the Wallabies and Wales start.”

That time together has been well spent by Fiji, who have taken on the Maori All Blacks, Japan, Canada, Samoa and Tonga over that period, with a return of four wins and two losses, albeit the Pacific Nations Cup did end up in Japan’s hands last month.

“You’re left as a Tier 2 asking “what’s around?” So, we were very fortunate to get two games against the Maori All Blacks before the Pacific Nations Cup and then we finished up against Tonga. 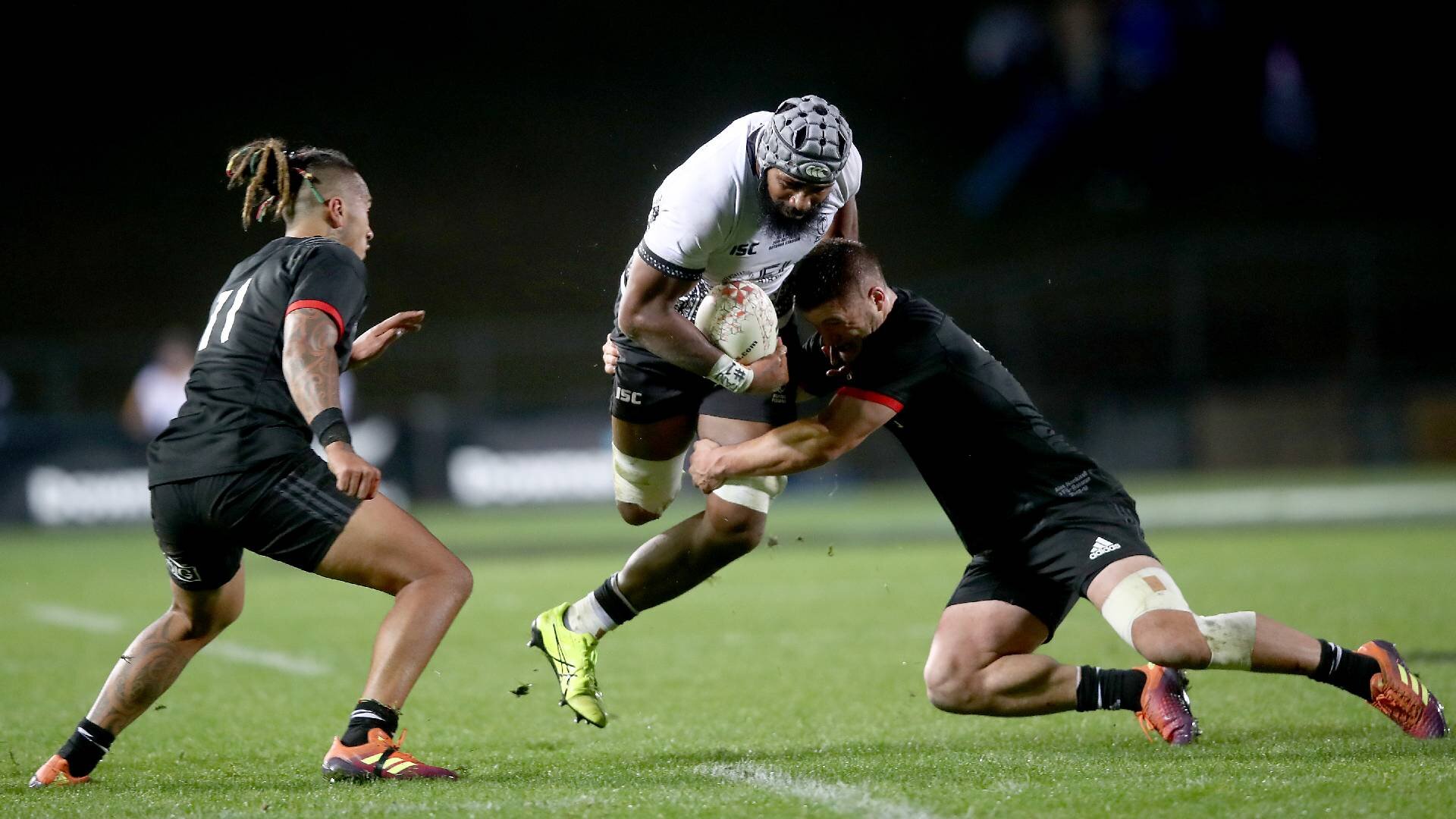 Fiji were tested early in their preparation by the Maori All Blacks. (Photo by Phil Walter/Getty Images)

“We had a very encouraging start against the Maori at home. That was an excellent performance, straight out of the blocks. And then we had a competitive, narrow loss against them away.

“We were disappointed with how we played against Japan. They played like a team that had tanked Super Rugby in order to prepare their national team. You could tell they’d been training for five or six months. They were super-fit, super-fast, well-drilled and they ran us off our feet. We had opportunities to win the game, but we didn’t take them. They deserved to win, and we were outplayed that day.”

Performance levels understandably fluctuated throughout that period as Fiji opted to select a 42-man training squad, with the experienced McKee keen to give everyone involved a start and allow them to stake a claim for their spot in the final 31-man squad.

The closer a team gets to the tournament, though, the more advances a group can make, as elements like the depth chart become further established and the training numbers become reduced.

“Since the coaches cut the squad down [from 42 to 31] the team has been training in a much more focused, tactical way. We will have had a three-week gap by the time we play the Wallabies and whilst there are some negatives to that, the positives are that you shouldn’t get as many injuries and you don’t get any suspensions.

“Because you’re not in a test week, having to do units and get your game plan in, a team can do much more quality work in key areas, without the rush or having to work against the clock.

“Once players know that they’re on the plane, there’s a noticeable lift in focus, too. Previously they may have been playing for a spot, but now they know that they’re going to be there when the bullets are flying in a couple of weeks. The team’s performance is now being maximised, rather than possibly trying to play your best as an individual.”

The first challenge on Fiji’s horizon comes in the form of Australia, with the two Pacific nations set to open their Rugby World Cup campaigns on September 21st in Sapporo.

According to Webster, McKee and all of the Fijian team are under no illusions as to how testing of an opener that will prove to be.

“Australia always peaks for World Cups, always. They relish the chip on the shoulder mentality because they think people are writing them off. I’d counter that by saying they flogged the All Blacks in Perth. The All Blacks picked their best team that night, too. It wasn’t like [Steve] Hansen was playing possum and holding his cards too close to his chest.

“It was possibly the best performance in the world this year. We think they’re a great team and they’ll deservingly be hot favourites going in against us. We don’t hold any illusions. We’re going to need to be absolutely on our game to compete with the Wallabies. If we play our best and control the footy, we give ourselves a chance to compete in that test.”

And compete in that test they will have to, with their hopes of qualification from Pool D likely hinging on beating at least one of Australia or Wales, with bonus points more than capable of swinging qualification one way or the other.

The challenges don’t relent, either, with a short turnaround following that game with the Wallabies before Fiji take on Uruguay, ahead of their meetings with the two European nations, Georgia and Wales.

“Georgia will be a real grudge game for us. World Rugby have invested in three countries in the run up to the World Cup with Japan being one and Georgia and Fiji being the other two. They’ve been very well resourced, they’ve got great training facilities back in Georgia and that’s been reflected in their U20 results recently.

“They’ve got arguably the best scrum in the world. The last time we played them we beat them, before that they beat us in 2017, so that will be a very interesting match-up. They’ll probably think they’ll have it over us in the forwards and be trying to keep it away from the backs as much as possible. That’ll be a real chess game.

“Then Wales. Wales are very consistent, great coach, very experienced players. They’ll present our team with a different challenge and style. The Wallabies will be very attack-focused, Georgia are all about the set-piece, then Wales could play a very tight game, field position and then try to grind you away.

“What did Mike Tyson say? Everyone’s got a plan until you get punched in the face, so we’ll see where we are when the bell rings. We’ve got to answer the count when the punches start getting thrown.”

As much of a challenge as the pool poses, though, Fiji are not in a bad place heading into the tournament. Far from it, in fact, with only Kalivati Tawake, who suffered a grade 2 MCL strain in the win over Tonga, ruled out from Fiji’s 31-man squad.

He has since been replaced by Jersey Reds’ Lee Roy Atalifo and McKee has had the luxury of calling on as strong a squad as possible for the tournament.

“In World Cups, experience matters. We have an experienced team. We get penalised a bit by the capping comparison, because we play half the tests a Tier 1 would. We have two guys in our team, Niki Goneva and Campese Ma’afu, who have over 50 caps. In any other team, they’d be 100, 110 cap players.

“There’s a saying, ‘you need an old dog for a hard road’, and it’s hard road. The World Cup is a slog.

“Our staff think you’ve got to balance that experience with in-form players and then top that up with guys like [Frank] Lomani and Freddie Veitokani, who are the up-and-comers who can really break games open.” 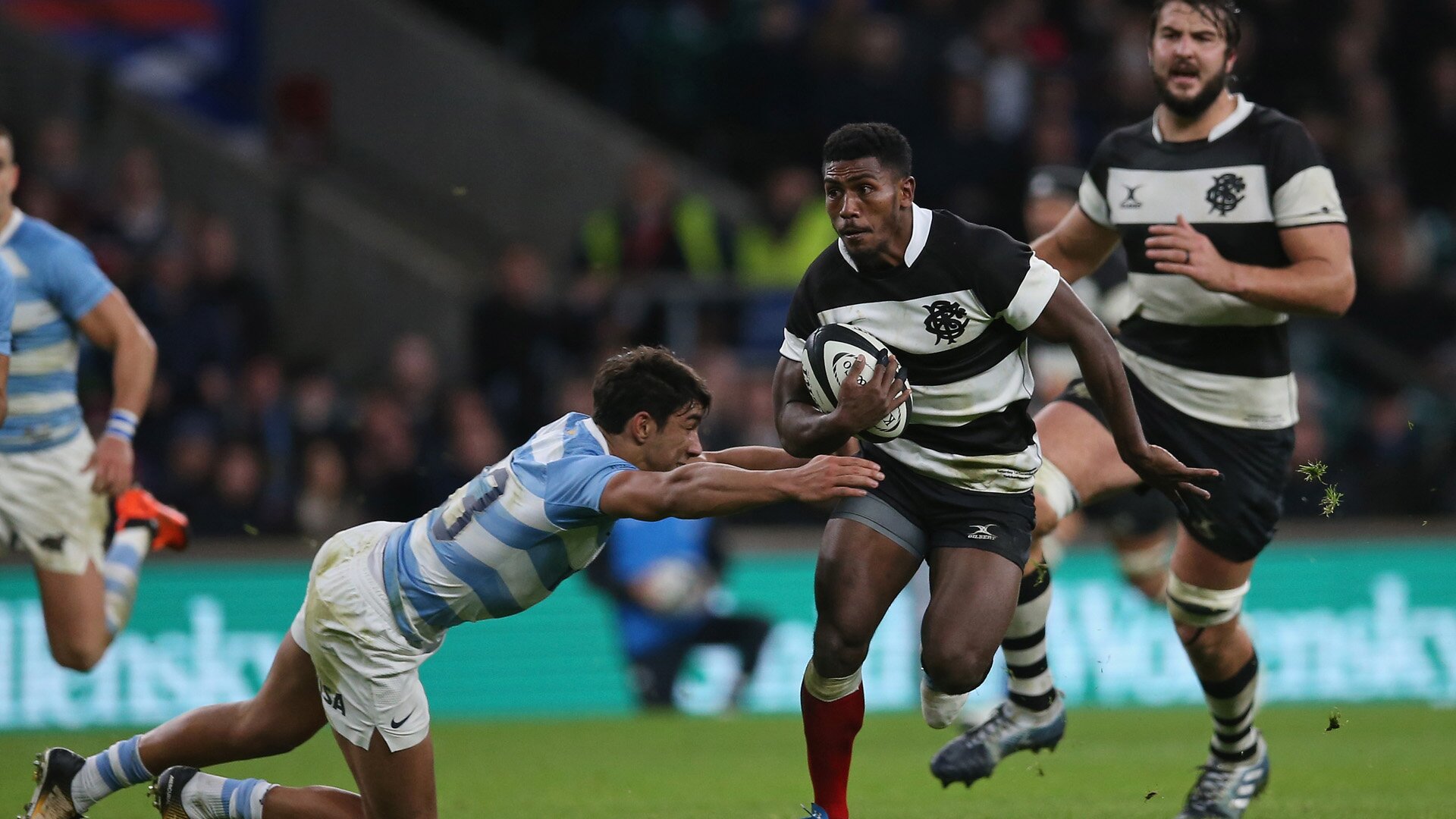 Frank Lomani, one of Fiji’s key men, makes a break for the Barbarians at Twickenham. (Photo by Steve Bardens/Getty Images)

“We’ve been fortunate so far that we’ve only had one injury. It’s just a reality that we battle a little more on the depth side. The Poms, the Irish, New Zealand…they all have it. Australia are probably going to bring [David] Pocock off the bench and he’s still the best openside in the world!

“There’s a real unity in the team. The Pacific Island teams, but Fiji in particular, have a bond that transcends the jersey that they wear. It’s a strong cultural bond that some other teams don’t have and that’s a bit of a superpower for us.

“We’re well coached, we’ve got quality players and we’ve put ourselves in with a chance. In these kind of events, there’s always tighter games and maybe an upset. There may be a few more at this tournament than there have been previously.

“We’ve worked hard to get here, and we’ll see whether that pays dividends.”

With Fiji’s opener against Australia now less than two weeks away and anticipation levels rising, it won’t be long before we find out just how competitive this side can be.

They may not have the pedigree or resources of some of the Tier 1 nations that they will face over the coming weeks, but with the likes of Viliame Mata, Leone Nakarawa and Josua Tuisova leading the way for the Islanders, few would be brave enough to write them off just yet.

Watch: World Rugby hit back at Steven Hansen’s claims they have not done enough for the Pacific Islands

'Red cards are worth it' Next