The devastating World Cup semi-final loss in Auckland in 2011 summed up a 30-year period of French dominance over Wales.

Just eight victories in 43 Tests told of an inferiority complex. An inability to overcome a rugby giant. The smiling faces of Tricolore-draped tormentors were etched in the annals of Welsh hurt. Philippe Sella – too slick. Thomas Castaignède – too cheeky. Olivier Merle – too brutal.

Since that loss, however, there has been an upturn with one common denominator – Warren Gatland. Seven wins in eight games has led many sages to suggest Wales are home and hosed.

This new-found resolve was exemplified by anyone who bore witness to the events of February 1 this year. Wales clutched victory from the jaws of defeat in Paris, overcoming the biggest half-time deficit in Six Nations history to win 24-19 as both sides struggled to handle the ball in a torrential downpour.

Any over-confidence, however, should be tempered. When it comes to World Cups, France have form. Maddening, inconsistent and eccentric they may be but Les Bleus have also reached three World Cup finals. In 1999 and 2007 they sent New Zealand into mourning, and in 1987, they sent the Wallabies into apoplexy when Serge Blanco pinned his ears and never looked back.

In 2011, revolution was in the air and Marc Lièvremont boasted a Clouseau-style moustache, only adding a sense of slapstick, yet Thierry Dusautoir’s men still dug in to reach the final, losing by a point to an All Blacks team fraught with anxiety after countless near-misses.

The 2019 French vintage have similarities. There is said to be an air of malcontent in the French ranks. Their bull-necked hooker, Guilhem Guirado, is rumoured to have crossed swords with Jacques Brunel and the influential Fabien Galthié to leave France bristling with indignation coming into this game.

Rien ne change you might say but is it enough to topple a Welsh side that has won its last 11 tournament matches in a row, seven in the Six Nations and four at this World Cup?

Here are your teams for Wales vs France #WALvFRA

Our index gives Wales a 91% chance of victory, agree? pic.twitter.com/r6TeQ5VtZI

One man who has tasted more than a soupcon of French life is Lee Byrne. After a successful career in which he won a Grand Slam, toured with the Lions and picked up 46 Wales caps, he pitched up in the Massif Central to spend three glorious seasons at Clermont, playing alongside superstars Jerry Collins, Sitiveni Sivivatu and Aurelien Rougerie on the way to a Heineken Cup final with the Yellow Army providing a constant, boisterous backdrop.

The full-back says France’s woes this decade on the international stage are intertwined with the growth of the all-powerful Top 14. “I do think the weakening of the national team has coincided with the influx of foreign players,” he told RugbyPass.

“I know they’re trying to change it, but when I was playing there, sometimes we would only three or four starting French players. That doesn’t help the French team. If you don’t have enough game-time, you don’t have the intensity to step up to the pinnacle of the game.”

France name an XV to face Wales with five changes from their fortunate win over Tongahttps://t.co/oXANbwZerb

Adding to the unique complexities of French rugby is the fact that performing away from home is a deep-seated problem. “At Clermont, if they weren’t playing at the Stade Michelin, they just weren’t up for it.

“Sometimes you’d dread being in that away team because their heads weren’t on it. Their game is all about emotion. If we played home and away, we didn’t mind. It’s part of our job. It’s different in France.”

Despite talk of unrest within the French camp, Byrne, having spoken to some of his Gallic contemporaries this week, says he has been told all is well. “I’ve been speaking to a few boys in France and they haven’t heard anything.

Welsh fans have a message for @jimhamilton4 and the World after famous win over Australia. #RugbyWorldCup #AUSvWAL pic.twitter.com/WuLfgSDkyQ

“I’m not sure where these rumours come from but having spoken to the likes of Benjamin Keyser and Alexandre Lapandry plus knowing Julien Bonnaire, who is in the squad management, as far as they are concerned, everything is hunky-dory.”,

Having watched the build-up to the quarters, the 39-year-old, who has spent his time since retiring in May 2015 building his construction business, BridgePort360, says there is an air of confidence emanating from the Welsh camp that will need checked.

“Wales have to be careful. The players don’t want to buy into the fact France will come unprepared. Warren has sounded upbeat this week. He pointed out that they had to be wary of Fiji and Australia but didn’t say that about France. They don’t want to be getting too carried away. France could come out and have the game of their lives. Knowing Warren, though, he will keep their feet on the ground.”

Why the absence of Alivereti Raka has cheered some Wales fans ahead of Sunday's clash with France in Oita
https://t.co/LhHlOGeooL

Like France, emotion is deeply entrenched in the Welsh psyche and it will have to be harnessed correctly. The squad will be desperate Gatland’s near 12-year tenure doesn’t end in Oita. If that happens there will a feeling of an unfulfilled legacy and Byrne feels that this is where Alun Wyn Jones will take matters into his own hands.

“Alun Wyn will speak to the players behind closed doors, away from the coaches. Warren would walk away tomorrow without making a fuss – that’s the type of guy he is, but Alun Wyn will be saying, ‘This could be it. Some of you have been with him from the start, we need to deliver’.”

From playing alongside the then 20-year-old at the Ospreys, Byrne has watched Jones mature into a player who has taken on the role of a national ambassador. “He’s grown into that role as captain. He used to be very quiet. He’d do all his talking on the field. Even without the captaincy, you’d be in awe of his workrate around the field but now he’s become more vocal. He will be motivating the players and bringing his own fire and passion.”

Wales are hoping it will be third time lucky for Dan Biggar versus France after his two recent World Cup appearances were cut short by concussion https://t.co/PNN22iP0HR

This will be the Welsh captain’s final World Cup and with Ken Owens, Jonathan Davies, Hadleigh Parkes and Leigh Halfpenny outside-bets to make France in 2023 and Dan Biggar and Justin Tipuric no certainties as they hit their mid-thirties.

That is over 550 caps of battle-hardened experience that will disappear before the next World Cup. It bears comparison with New Zealand’s side in 2015 when Richie McCaw, Dan Carter, Keven Mealamu, Conrad Smith, Jerome Kaino and Ma’a Nonu bade farewell.

When they are in the bowels of the Oita Stadium on Sunday, that leadership group – the spine of the Welsh team – will take a few quiet moments and for good reason. Byrne feels France are no pushovers. “It’s a really good French side. I’m not sure if I bought into (Antoine) Dupont and (Damien) Penaud not making it. 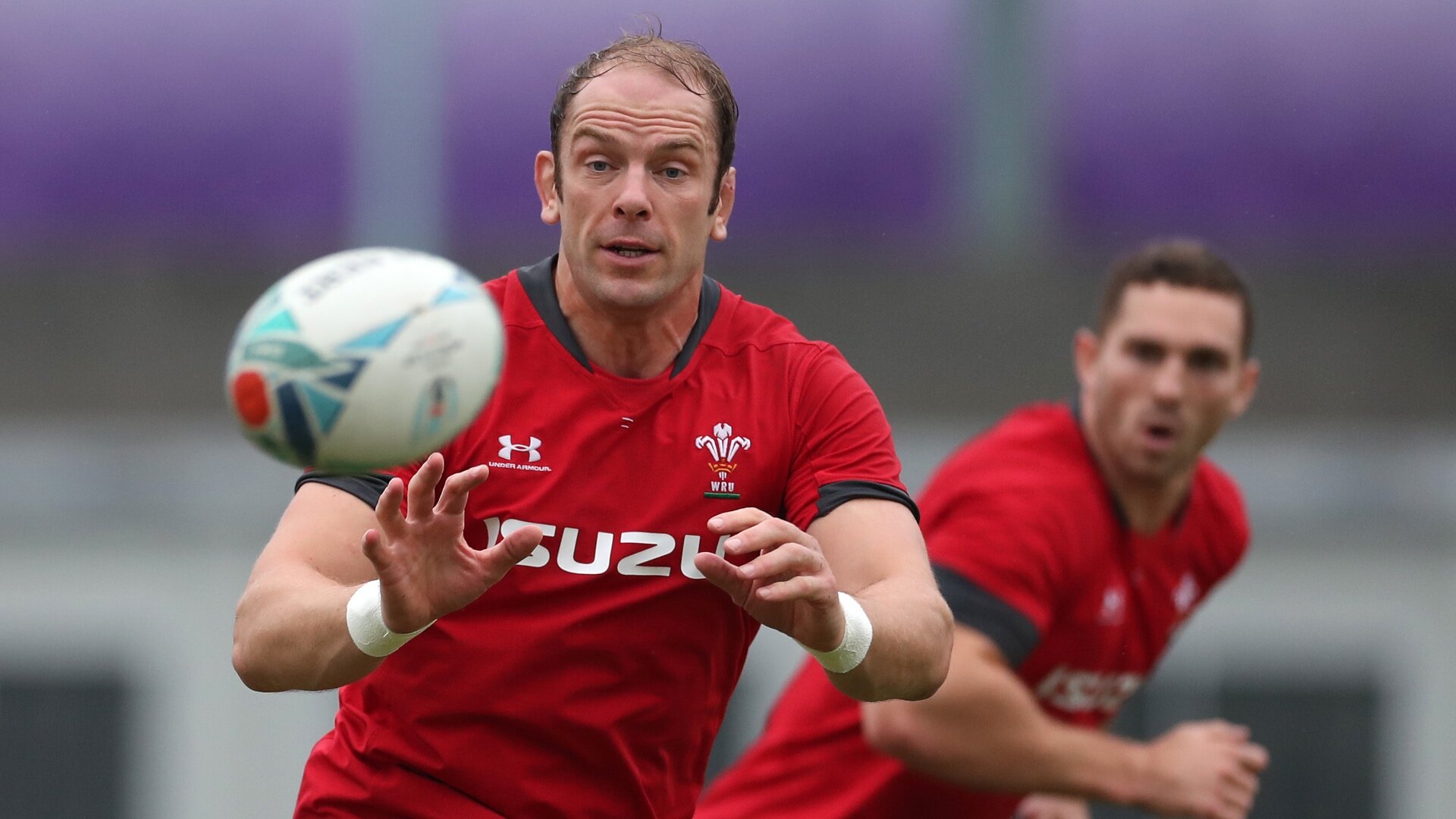 “They are two key players. Dupont is your typical goal-kicking French nine, like Morgan Parra and Penaud is one of the players of the tournament. I’m surprised they haven’t picked (Alivereti) Raka because he’s looked dangerous but (Yoann) Huget is very, very experienced. If it all comes together, who knows…”

Byrne also accepts that while France have the ability to dazzle, they can also be their own worst enemies. “The fear for France is that they could lose the game by themselves. If they try to be too adventurous with their offloads and try to make everything stick, especially with the conditions out there, they risk coming undone. France will come to play but I see Wales sticking to their gameplan. They won’t do anything rash unless they’re seriously chasing the game.”

With Wales set to know their fate, Byrne is still confident their mental toughness will see them through. “At the moment Wales just seem to be able to play out those final 10 minutes. In the old days, it never used to go our way, but they have worked mentally on how to manage those situations. They could have easily lost those games against Australia and Fiji, so you have to admire the guts they have shown.”

The hangtime on this Dan Biggar kick… ??

Byrne attributes that resolve to the depths they have endured away from pitch, with the summer training camps organised to push them to the limits of human endurance. “They’ve been in dark places. Boys in camp know what you have to sacrifice to succeed and this is the most experienced squad they have ever taken to a World Cup.”

One area Wales that has quietly impressed Byrne has been their attack. With 16 tries notched and almost half as many chalked off, Wales have expressed themselves as much as at any point in the last 18 months, working smartly in the wide-channels and scoring tries off first-phase.

The addition of Stephen Jones, a former team-mate has been a boon. “Wales have been more potent in the World Cup and it helps that Stephen is a very positive person. He has an amazing rugby brain and it was a pleasure to play with him for so many years.

“He’s a different personality to what they have had before and will be running his own skill sessions. I know Wales won’t be changing too much, only the minor things, but in time I’m sure he will put his own imprint on the squad.”

While Byrne will be watching from afar, with his young eight-month old daughter Jemima in tow, his loyalties lie firmly with the Welsh camp despite his fondness for France. He believes Wales can emerge victorious.

“If Wales win, it will be by 10 to 15 points. They have been tested while France only really flickered against Argentina and had two weeks off which could work against them. They will have to play their best game for years, while Wales have the momentum. I see them firing on all cylinders towards the semi-final.”

WATCH: Shane Williams sets the scene with RugbyPass ahead of the Wales vs France showdown in Oita