Japan’s Top League already has an abundance of foreign talent kicking around and the developing rugby nation will have a further influx of international players for the 2020 season.

Check out our ‘Moving to Japan’ XV, which includes players who won’t return to Super Rugby next year due to their commitments to Japanese clubs.

James Marshall started out his career in New Zealand in the first five role but found most success at fullback for the Hurricanes.

The former Tasman and Taranaki player was a part of the Hurricanes side that won the Super Rugby competition in 2016 and also played in the previous year’s final against the Highlanders. With Ngani Laumape playing a physical role in the midfield, Marshall acted as a secondary playmaker to Beauden Barrett.

Marshall was also at fullback for Taranaki when they won 2014’s ITM Cup premiership.

The Nelson-born playmaker spent Super Rugby’s off-season representing the Coca-Cola Red Sparks and returned there after the Hurricanes were knocked out of the semi-finals in this year’s competition. Given the overlap between Super Rugby and the Top League next year, Marshall has likely played his final game for the Hurricanes – at least for the foreseeable future.

Ataata Moeakiola received huge raps from outgoing Chiefs coach Colin Cooper. Moeakiola was actually signed for the Chiefs for 2019 ahead of Sevu Reece. Whilst Reece went on to win the title with the Crusaders, Moeakiola played just four and a half games worth of rugby for the Chiefs.

The Tonga born but Japanese naturalised Moeakiola will likely return to his home country with a considerably better understanding of the game. He’s a big, fast winger who will no doubt have an excellent career for the well-stocked Kobelco Steelers, but will have to work on his defence and involvement if he wants to excel for the Japanese national side.

Moeakiola has been included in the Brave Blossoms training squad ahead of the Rugby World Cup.

Ryan Crotty, until recently, never really got the credit he deserved as a major piece in the Crusaders backline.

Crotty, who is currently recovering from a fractured thumb, is odds on to start in the All Blacks midfield at the World Cup and is part of a Crusaders midfield that has looked resolute on defence and dynamic on attack.

With 150 caps to his name for the Crusaders and numerous titles with both Canterbury and his Super Rugby side, Crotty is one of the most experienced players to head to Japan at the end of this World Cup cycle.

25-year-old Kerevi will be linking up with this year’s beaten Top League finalists once his duties with the Wallabies come to a close.

Kerevi is perhaps the most disappointing loss for Super Rugby, given his young age. The Reds captain has only just started entering his prime as a dangerous ball-runner and under-rated link man.

Kerevi notched up the second-most run metres of any player in this year’s Super Rugby season and made the most tackle busts and equal-most offloads. The Reds and Wallabies will struggle to find anyone half as potent as Kerevi in the near future.

The North Harbour and Highlanders winger will join Kerevi at Suntory for next year’s competition and will be a major force on the wing.

Despite his relatively small stature, Li very rarely fails to break the first tackle and in recent years has also improved his distributing ability. Although he may be a bit of a turnstile on defence, he’s been regularly selected on the left wing for the Highlanders due to his gamebreaking abilities.

Auckland born and Melbourne raised, Christian Lealiifano has travelled far and wide for his rugby. Although Lealiifano has played all his Super Rugby for the Brumbies, he has also turned out for Waikato, Ulster, Suntory and Toyota Jido Shokki.

Lealiifano is just one of the many first fives that will be heading to Japan next year and will spend the rest of 2019 battling it out with Bernard Foley (who is heading to the Kubota Spears) for the Wallabies 10 jersey.

Lealiifano made his international debut in 2013 against the British and Irish Lions. Whilst he hasn’t notched up many appearances in the gold jersey since then, he has ample experience at Super Rugby level with almost 150 caps to his name.

Will Genia has at times been considered the best halfback in the world but will see out his playing years with the second division Kinetsu Liners, based in Osaka.

Genia has over 100 caps at both Super Rugby and international level and also spent two seasons at Stade Francais. The affable scrumhalf won a Super Rugby title with the Reds and has won two Rugby Championships with Australia. He will be looking to cap off his international career with a good showing in the World Cup.

Genia was born in Papua New Guinea and has been included in Australian representative sides for almost 15 years.

New Zealand captain Kieran Read will cap off his international career at the World Cup later this year before heading to Toyota alongside All Blacks coach Steve Hansen.

Read has run out for the Crusaders over 150 times and is nearing 130 caps for the national side.

The number 8 started his career on the blindside flank for Canterbury but was schooled in South Auckland.

David Pocock has widely been considered one of the best flankers in the world and sadly had to bow out of Super Rugby early with one of his many chronic injuries.

The Zimbabwe-born flanker has captained the Wallabies and the Brumbies and has always been a mainstay in the loose forwards when fit.

Pocock debuted for the Western Force back in 2006 and will now join Robbie Dean’s Wild Knights. The sometimes-eighthman previously spent time with the team during Super Rugby off-seasons and will no doubt enjoy linking up with his former national coach.

Pocock has twice been nominated for World Rugby Player of the Year.

Liam Squire has been a mainstay in the All Blacks for the last few years but has never really established himself on the world stage.

Squire started his Super Rugby career with the Chiefs before moving south to the Highlanders in search of more game time. Ironically, the Highlanders have had arguably the most jostling for spots in the loose forwards of any New Zealand side in recent years.

Squire is an excellent physical specimen who will crush many an opponent when he arrives at the Red Hurricanes.

Questions remain over whether the Super Rugby champion will play for New Zealand at this year’s world cup, with Squire ruling himself out of the Rugby Championship squad.

The Crusaders captain will link up with former coach Robbie Deans at Panasonic at the end of 2019 and will be hoping to cap the year off with a third World Cup title.

Whitelock was born in the Manawatu region but is a Canterbury man through and through, making over 150 collective appearances for the region’s provincial and Super Rugby sides.

The athletic second-rower will return to New Zealand to represent the All Blacks once his Japanese club commitments end but will play no part in Super Rugby next year.

Brodie Retallick, former World Rugby Player of the Year, will add some extra mongrel to the Kobelco forward pack but also offers plenty off skill and flair in general play. 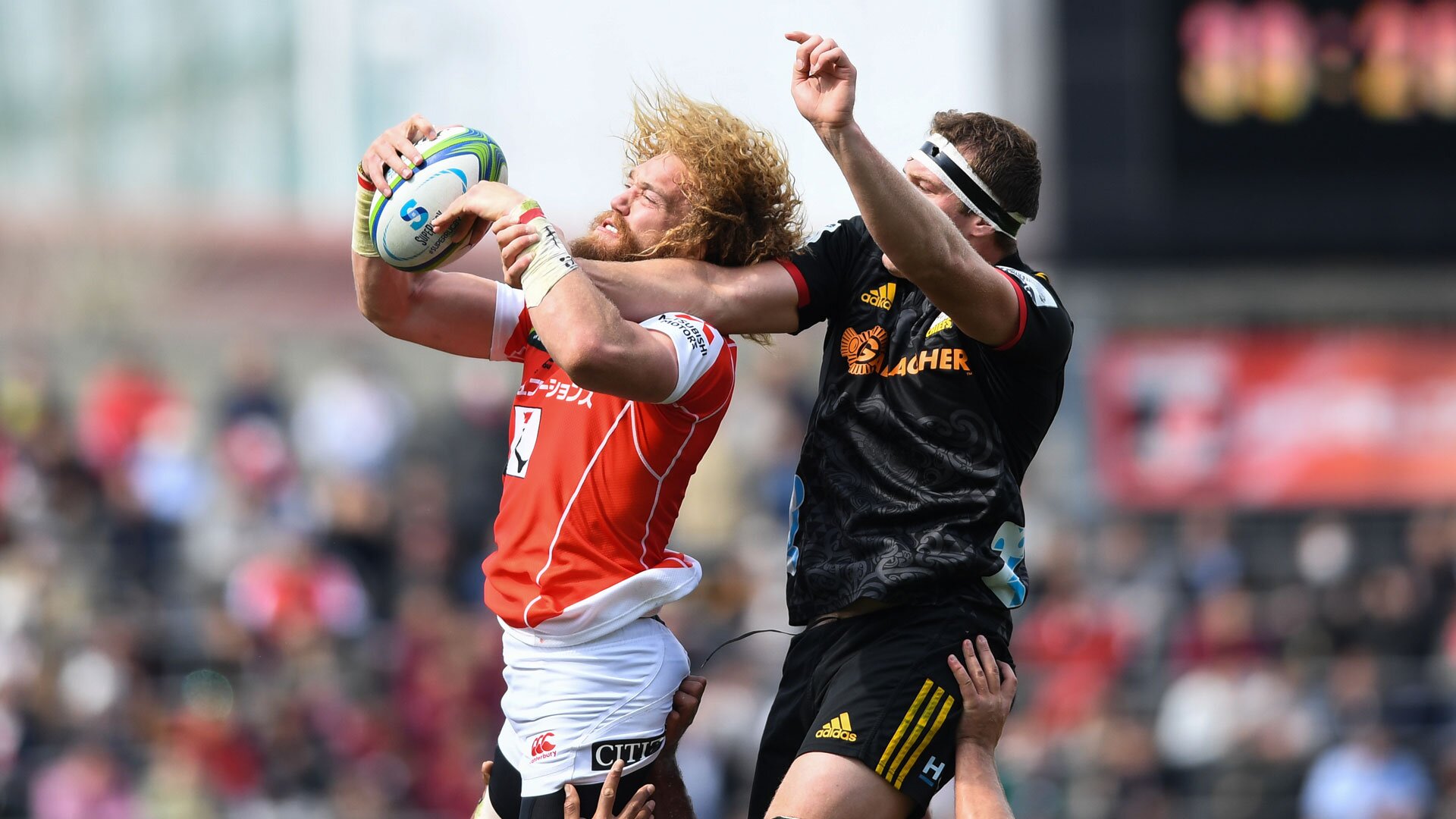 Brodie Retallick competes with Sunwolves loose forward Willie Britz. (Photo by Takashi Aoyama/Getty Images)Retallick was schooled at Christchurch Boys’ High School, a college famous for breeding future All Blacks. He has won two Super Rugby titles with the Chiefs as well as a World Cup with New Zealand.

Like Whitelock, Retallick has the option to return to NZ to play for the All Blacks.

Sam Talakai has been a bit-part player for the Rebels for the last two years and will head to Japan in search of more game time.

The Melbourne-born prop started his career in Sydney then spent time at the Reds before joining the Rebels at the start of last year’s competition.

Despite being one of the side’s vice-captains, Talakai was used primarily as a bench player for the Rebels this year, averaging just 26 minutes a game.

The Lions have been haemorrhaging players in the last few years and Malcolm Marx becomes just one more defector.

Marx has been one of the form hookers in world rugby in recent years and, despite being a little out of form in 2019, will likely have a huge role to play in South Africa’s push for a third World Cup.

At just 25 years of age, Marx is another big loss to Super Rugby. It’s not the end of the world, however. The formidable hooker will play for the Shining Arcs in next year’s Top League before returning to South Africa for the latter stages of Super Rugby – but it might be too late for the Lions by that point.

Clearly the Japanese are excellent at producing front rowers, because Sam Talakai is the only prop to be departing Super Rugby for the Top League next year. As such, Ben Funnell has to step in to cover the loosehead (cheating, I know!).

Funnell has had a lengthy career for the Crusaders and was considered a potential All Blacks at one point. Corey Flynn’s presence during the formative years of Funnell’s career and Codie Taylor’s emergence in the later stages pushed Funnell down the pecking order and he now looks to be seeking extending playing time overseas.

Funnell has spent eight seasons with the Crusaders and won five titles with the Canterbury provincial side.