Lions downed by South Africa 'A' in bruising wake-up call

The British and Irish Lions fell to the first defeat of their tour as South Africa ‘A’ landed a psychological blow ahead of the Test series by registering a 17-13 victory at Cape Town Stadium.

A match billed as an unofficial fourth Test due to Rassie Erasmus picking a shadow Springbok side containing seven starters from the 2019 World Cup final and 522 caps, delivered on expectations.

Despite the disruption caused by their Covid outbreak that forced the entire squad to self-isolate, South Africa were dominant in a first-half they finished 17-3 ahead with Sbu Nkosi and Lukhanyo Am scoring tries.

But the Lions, helped when Faf de Klerk and Marco van Staden were sent to the sin-bin, rallied impressively through a Wyn Jones try and Owen Farrell’s boot as they faced their first meaningful test of the tour.

After moving into the ascendency for the third quarter, Warren Gatland’s team were unable to unpick the green wall again in a full-blooded meeting that signposts a ferocious Test series to come.

Inevitably on a tour where upheaval has been the norm, the Lions were forced into a late adjustment to their starting XV when Dan Biggar failed a fitness test for a minor sprained ankle and Josh Adams withdrew to join his partner via video link to witness the birth of his first child.

Biggar’s place at fly-half was taken by Farrell and Liam Williams plugged the void in the back three created by Adams’ absence. Williams’ appearance was short-lived, however, as he failed a head injury assessment in the 15th minute.

There was no sign of rustiness as South Africa made an early impact at the breakdown and Nkosi almost crossed in the left corner but Anthony Watson arrived just in time to push his foot into touch. 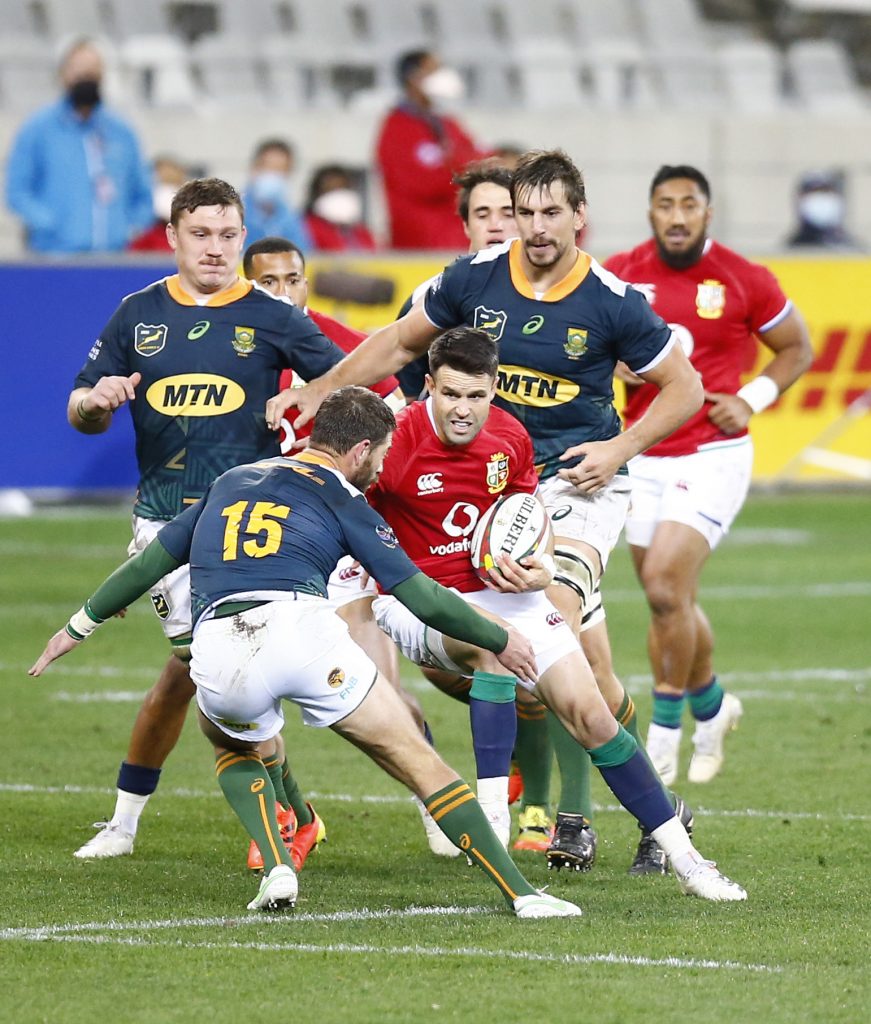 The Lions mastered a series of scrums but the sense of victory was brief as Eben Etzebeth charged down a kick by Farrell and Damian de Allende quickly threaded the ball to Nkosi who struck from long range.

Williams departed for an HIA and Farrell’s shaky start continued when he sent a kick for touch dead, handing the ball straight back to the hosts.

And they used it well as the Lions were driven backwards at successive mauls but as South Africa looked to turn the screw, the tourists were rescued by their impressive scrum. 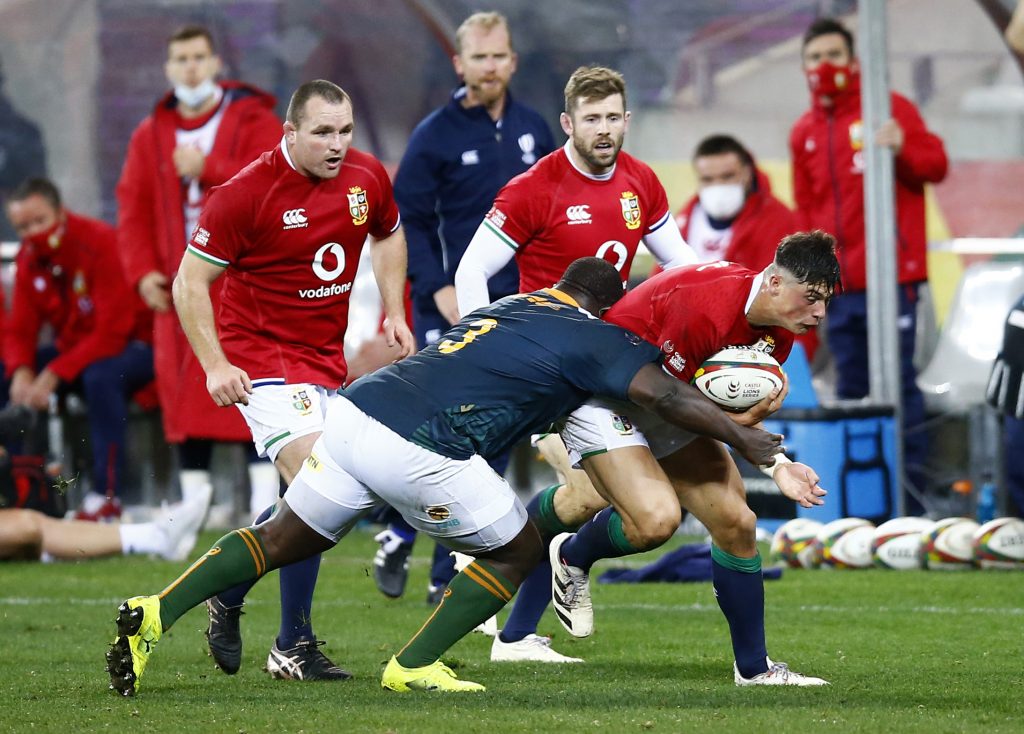 It ignited the Lions’ best spell of the first half hour and they finally registered their first points through a Farrell penalty.

But their good work was undone when Elliot Daly, who had come on for Williams, kicked the ball straight to Kolbe and the wing somehow forced an opening between Chris Harris and Louis Rees-Zammit before offloading for Am to score.

The Lions fought back with a forward-led assault on the line that saw de Klerk punished with a yellow card for a desperate no-arms tackle and then openside Marco van Staden follow him into the sin-bin for dangerous play. 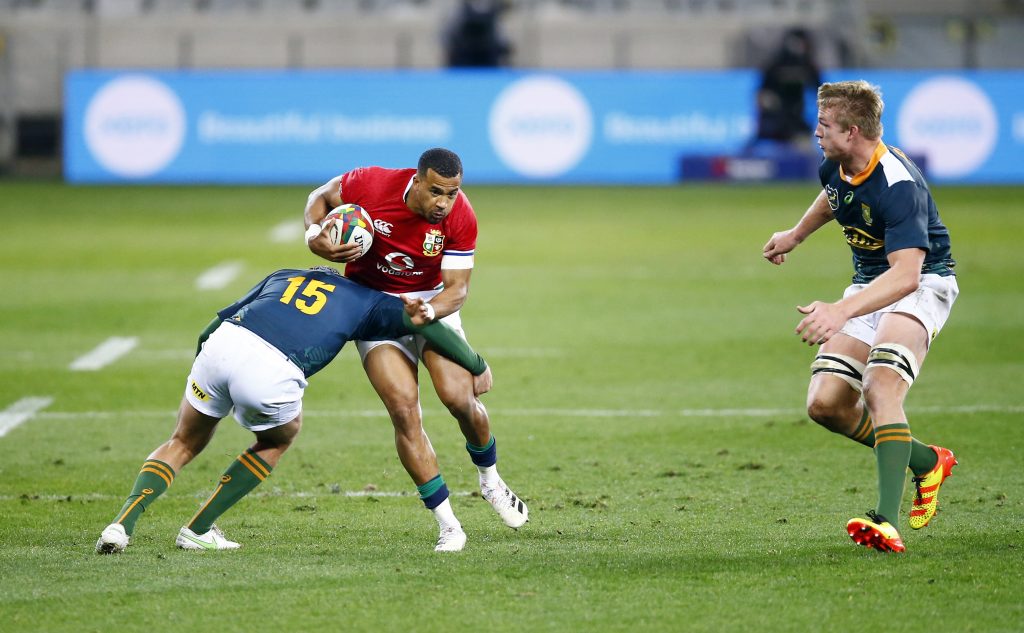 Yet despite their extra numbers, Gatland’s side could not breach the whitewash and after waves of pick-and-goes, they conceded a penalty for a double movement.

Finally they crossed four minutes after the interval when Jones burrowed over from close range as South Africa’s 13 men were stretched to breaking point. Unfortunately for Jones, he then departed with what appeared to be a shoulder injury.

De Klerk and Van Staden returned to a different game as the Lions poured forward at every opportunity and trailed just 17-13 heading into the final quarter.

Morne Steyn missed a penalty and drop-goal and a cagey finished ended with the Lions attempting a late salvage operation that fell short.