END_OF_DOCUMENT_TOKEN_TO_BE_REPLACED

'If I had my time again, I would have picked him': Hansen's 2019 World Cup selection regret

END_OF_DOCUMENT_TOKEN_TO_BE_REPLACED

Analysis: The All Blacks' game plan for the 2017 British & Irish Lions that got shelved

The 2017 All Blacks came into the Lions tour with the bulk of their 2015-World Cup winners – Jerome Kaino, Aaron Smith, Kieran Read, and Sonny Bill Williams to name a few.

The newest star was Beauden Barrett, at the peak of his powers after his 2016 season, which saw him take over the All Black 10 jersey and win the World Player of the Year award.

The All Blacks side was a powerful one, whilst the Lions came with confidence that the 2005 series result would not be repeated.

As bizarre as the assertion may sound to New Zealanders, the Lions played far more attacking width in this series around their Sexton-Farrell axis than the All Blacks did, even with the form player in the world in Barrett.

The All Blacks attacking shape was actually all about targeted carries at the heart of the Lions’ ruck defence, basing most phases off 9.

In fact, reigning World Player of the Year Beauden Barrett was hardly involved at all in the first Test at Eden Park.

It was an unusual pattern the All Blacks used in the first half, with Sonny Bill Williams and Ryan Crotty detached from any sort of traditional back play, instead being used as battering rams like extra ball-carrying loose forwards.

Like pistons, the All Blacks pack worked over the interior defence left, right, left, with the midfielders heavily involved in close.

The midfielders were either outside or inside options off forward runners, or were the primary ball carrier themselves. 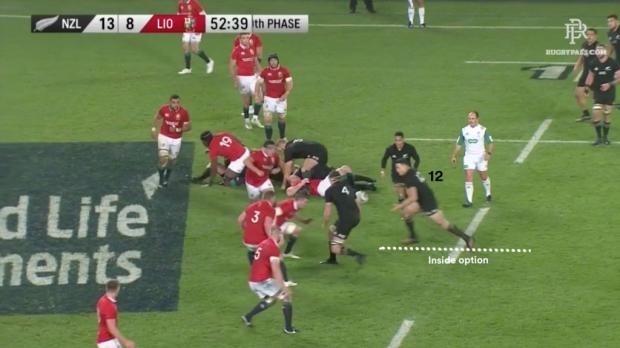 The forward pods often operated in duos alongside a midfield option, while large numbers would re-load on the short side for a switch of play back towards the sideline. 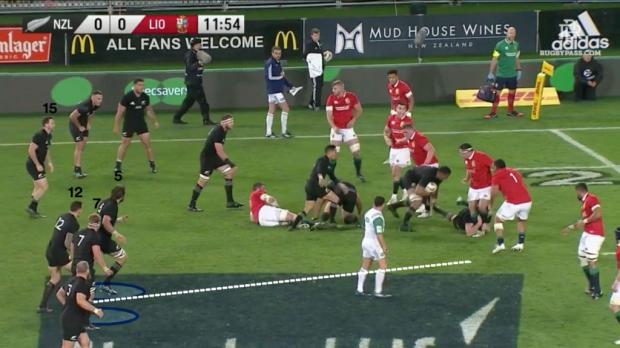 Sonny Bill Williams (12) is set up deep in behind a pod of two forwards, Sam Whitelock (5) and Sam Cane (7), before hitting a flat pass off 9 into the teeth of the Lions ruck defence. 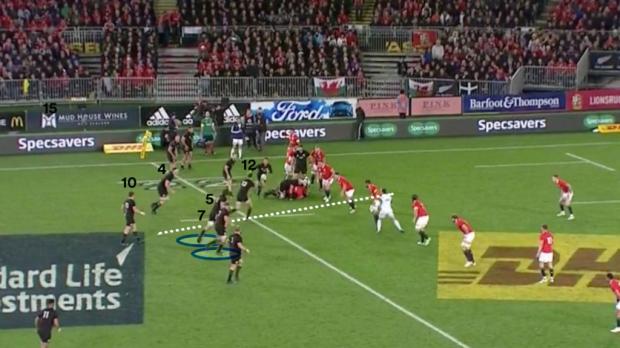 This play was frequent as the All Blacks’ powered themselves forward on Sonny Bill’s carries, as if he was back playing in the second row in the NRL and taking hit-ups. Ryan Crotty (13) was also used as an inside and outside option around these two-man pods. 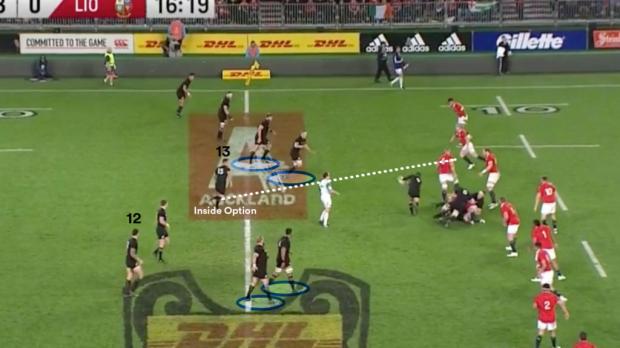 We can also see fullback Ben Smith (15) constantly lurking around behind the ruck, looking for a special one-two play with Aaron Smith that involes the fullback playing halfback and then receiving the ball back on the inside from 9.

In most of the above pictures, we can see around two thirds of the entire All Blacks side spread over no more than 15-metres or so metres of width.

Rugby writer Conor Wilson has theorized that the All Blacks ‘Javelin’ attack in this Lions’ series revolved around a set-piece play involving the 12-13, and in particular, Sonny Bill Williams’ ability to offload.

It may have been much bigger than that.

It could have been an entire operating system revolving around using the midfielders as extra loose forwards to funnel attack towards the heart of the Lions’ defence, wave after wave. When you see how narrow the concentration of players is, it does look like an arrowhead, hence the moniker of the Javelin. The gain line wins off Williams’ carries added up to big territorial marches into Lions territory, leading to six points off penalties and the platform for the first try in the first half. There were plenty of turnovers though, as part of the design of the strategy was meant to optimize the use of the offload by the All Blacks’ skilled big men and Williams.

Not all the passes in contact were clean or accurate as an error-strewn half allowed the Lions plenty of counter-attacking ball.

The All Blacks had to also overcome losing key parts. First, Ben Smith was lost in the 27th minute to concussion, forcing Beauden Barrett to fullback. Ryan Crotty was then forced from the field a little while later in the 32nd minute.

Crotty already had clocked up seven carries in 31 minutes.

The All Blacks’ plan was to match the Lions pack with primal physicality, and bash them up the middle, using one of Hansen’s most prized assets to do so.

It worked to the extent of needing to make metres downfield. It led to points from the field position earned, but didn’t directly result in tries.

The tries came off the moments the All Blacks finally did expand, a quick tap by Aaron Smith and fast hands saw Codie Taylor score the first in the corner and Rieko Ioane’s first was a result of some spectacular hands by Kieran Read to free the backs from a scrum play.

As much as Williams carried hard, his most influential involvement of the night may have been the decoy he provided on Ioane’s first try from the scrum. Having drawn the attention of Anthony Watson (14), the ball was popped over his head to the three All Blacks in open space on the outside. 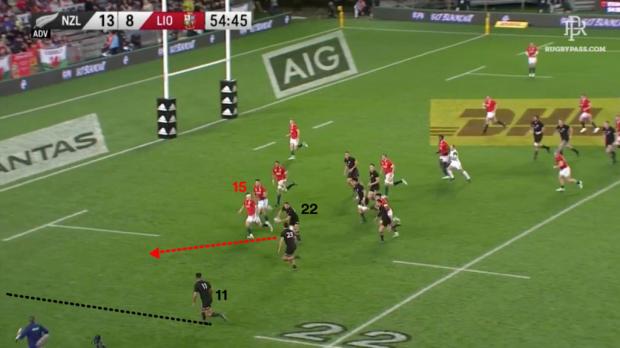 These wide shifts were few and far between, however. This attacking system was like a contracted coil waiting to spring, but it took a long time before the spring was let off.

So much attacking activity was cornered to one area of the field, around the ruck, leaving the remaining few backs with acres of width. When the All Blacks did take the opportunity to go wide, the cross-field kick was a perfect option. This suited the skillset of Beauden Barrett, and the option was likely kept in mind when the game plan was devised.

He would go without the ball for long periods, but when he did get it, he had the option to fire off his famed kick-pass that was so lucrative at that time in his career.

Except, when Smith went down early, Barrett was moved to fullback and when Crotty was lost to injury, it disrupted the original plans.

The All Blacks brought the same strategy to the pivotal second test in Wellington with some minor tweaks.

Waisake Naholo was brought in for Ben Smith, with Israel Dagg moving from the wing to fullback. Anton Lienert-Brown came into the starting side to replace Crotty at outside centre.

The All Blacks still had their workhorse Sonny Bill Williams, who could provide the bulk of the gain line carries in close quarters.

The conditions were awful, which suited the All Blacks up-front style of play. In the short period of time they had 15-men on the field, we saw similar use of the midfielders, and this time Naholo was also brought in close as well. Anton Lienert-Brown runs the same inside option that Crotty did in the first test, while Naholo is also lurking to provide latch support.

On the next phase, Sonny Bill Williams is anticipating running a deep to flat line on the opposite side of the ruck. 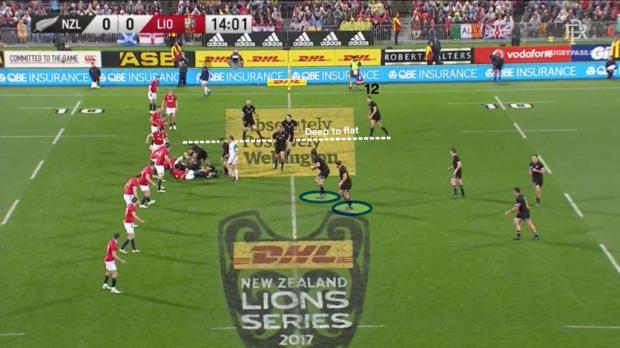 The conditions made play difficult and turned the game into more of an arm wrestle for territory through the air.

And of course, less than thirty minutes into the game, Sonny Bill Williams was red-carded.

Given Williams’ hefty involvement in the game plan and the conditions unfolding, there arguably couldn’t have been a worse member of the team to get sent off. To compensate, Kaino was subbed immediately for Laumape who could try to generate a similar impact.

As the game wore on, the All Blacks struggled to make the gain-line in the second half as soggy underfoot conditions left tired runners sitting ducks for the Lions defence.

The Lions’ own width game exploded in the final twenty to put together two tries with Johnny Sexton and Owen Farrell critical in their construction.

The visitors levelled the series and the All Blacks were left without Sonny Bill Williams, Ben Smith and Ryan Crotty for the decider.

They had to change as this game plan didn’t suit the new players coming in.

It was also time to free Beauden Barrett who had been relatively restricted in the first test by design and in the second test by the wet conditions.

They shelved this forward-focused narrow game plan for the third Test and let the shackles off so to speak, but two years later the idea still has relevance.

In 2019 the All Blacks pushed the same wide game all through the 2019 calendar and through the World Cup.

It came unstuck against England, particularly in the second half, where the predictability of the pattern led to punishing hits and huge gain line losses.

They couldn’t figure their way out of it, but this kind of operating change may have proved useful to get forward.

It worked in the first test against the Lions as a means to gain large chunks of territory to set up a prime attacking position.