Quins wing Lynagh, whose father Michael helped Australia win the World Cup with victory over England 30 years ago at the same venue, struck twice during the closing eight minutes of an epic encounter.

It means Quins became the first team since Saracens six years ago to finish fourth after the regular season and be crowned champions.

For a club whose head of rugby Paul Gustard departed his job in January, it is an astonishing turnaround as they triumphed following arguably English rugby’s greatest final.

Quins matched Exeter blow for blow during an unforgettable game, scoring four tries and leading by 12 points early in the second half.

But Exeter rapidly wiped out that deficit before Quins staged a majestic finale.

Quins, though, would not go away, as an early penalty try was followed by Lynagh’s double and scores for Wilco Louw, Alex Dombrandt and Andre Esterhuizen, with fly-half Marcus Smith, who was also sin-binned, landing four conversions on a day when Quins prop Joe Marler was named man-of-the-match.

There was an injury scare for Exeter and the British and Irish Lions, meanwhile, when hooker Luke Cowan-Dickie went off after making a second-half tackle.

A stretcher was called for, but Cowan-Dickie was able to return to his feet and walk off the pitch, being replaced by Jack Yeandle. 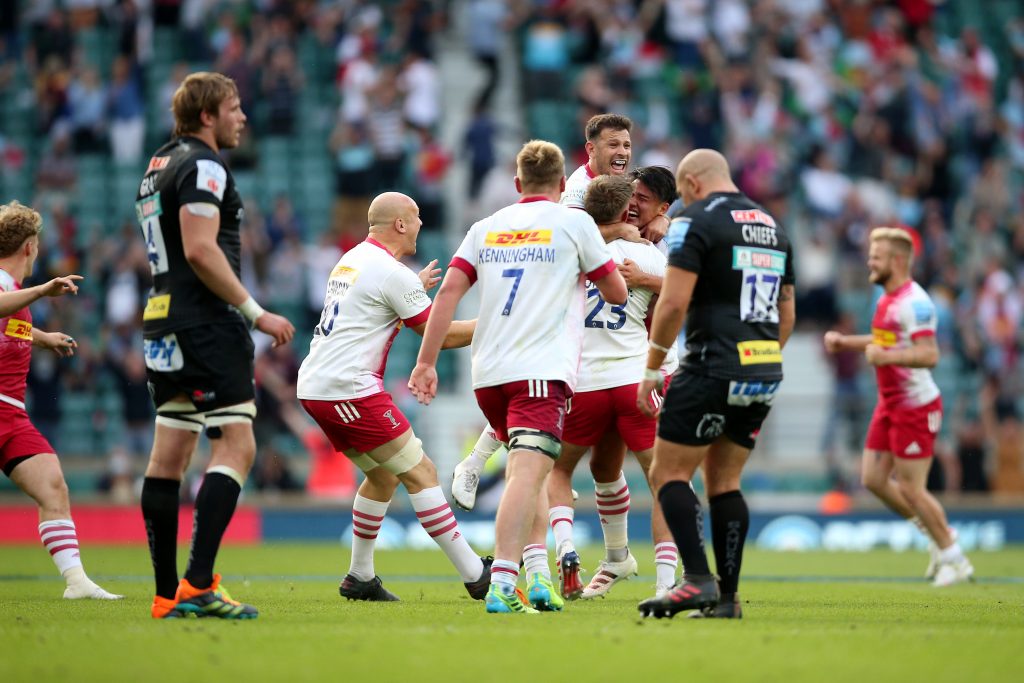 Scotland captain Hogg had to be content with a replacements’ bench role for Exeter, with Jack Nowell retained at full-back, but Hogg’s Lions colleagues Cowan-Dickie, Jonny Hill and Sam Simmonds all started.

A 10,000 crowd created a carnival atmosphere ahead of kick-off, and Quins flew out of the blocks. 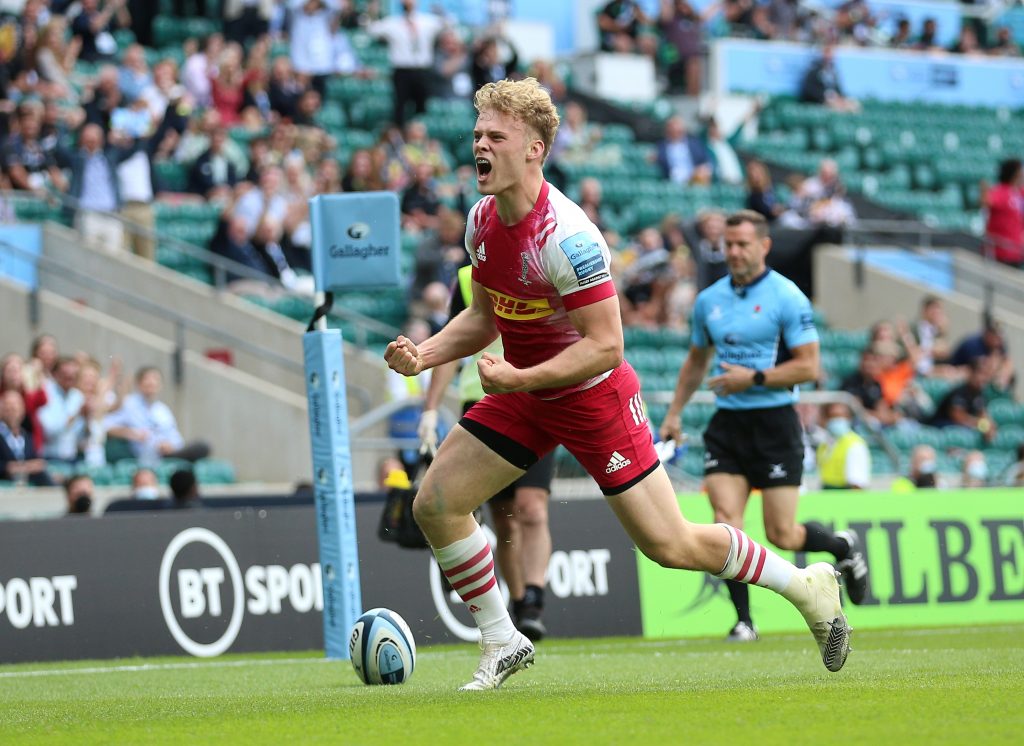 They monopolised possession, and after Smith rifled a penalty into touch just short of Exeter’s line, Chiefs collapsed the resulting maul and referee Matthew Carley awarded Quins a penalty try.

And as they moved seven points ahead, Quins also enjoyed a temporary one-man advantage after Carley sin-binned Hill for pulling down the maul.

Exeter were rocked by the ferocity of Quins’ opening, yet they gradually put some threatening passes of play together and Hill returned without any further scoreboard damage.

And Hill had barely reappeared before Exeter drew level, with the England international’s second-row partner Gray crashing over from close range for a try that Simmonds converted. 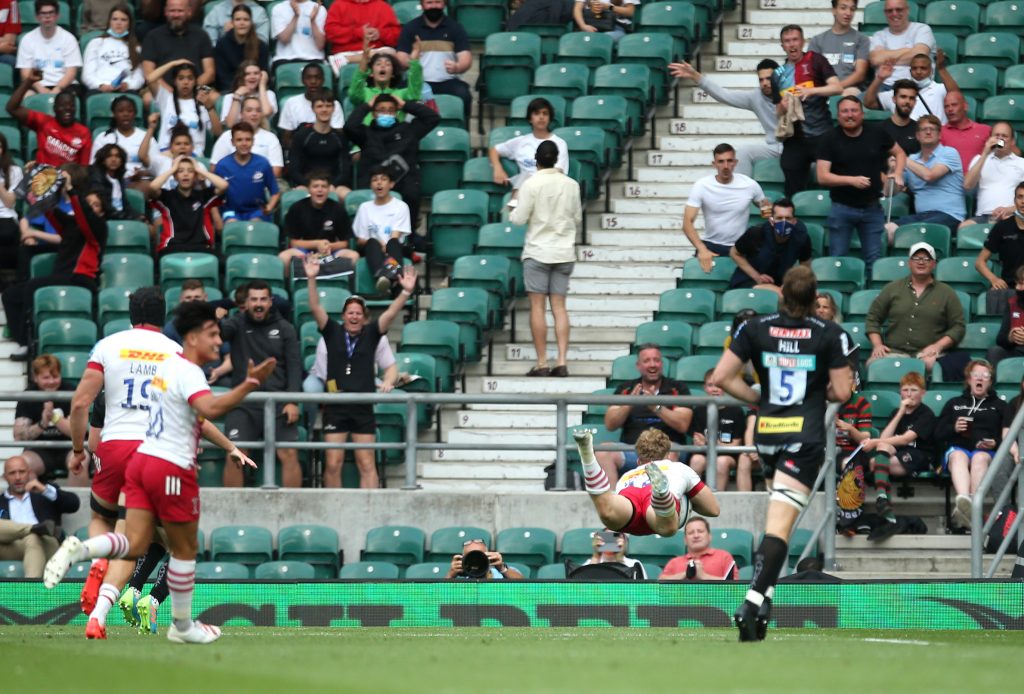 It was a fast and furious final, and another lengthy Smith penalty into touvh put Exeter under renewed pressure, but they managed to clear the danger and keep things tied at 7-7 early in the second quarter.

Exeter’s forwards began to assert a degree of control, and Chiefs went ahead 11 minutes before half-time when Hepburn dived over for a try, with Simmonds again converting.

Carley looked at several replays before the score was awarded, and Quins also collected a yellow card for their pains as Smith was sin-binned for deliberate offside. 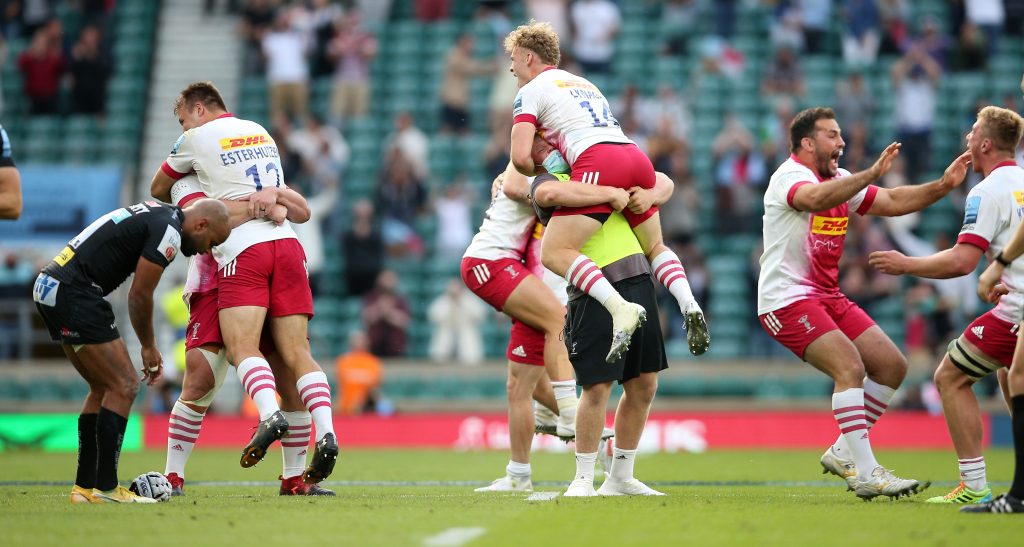 It was an impressive response by the champions, yet Quins rallied while Smith looked on, setting up an attacking platform just five metres from Exeter’s line as half-time approached.

Exeter initially held Quins out, but it could not last, and Louw notched his team’s second try, before Smith’s goalkicking deputy – centre Joe Marchant – saw his conversion attempt hit the post.

Smith rejoined the action as Quins produced some impressive Louw and Joe Marler-inspired scrum power, and they stole an interval lead when Smith sent Dombrandt over for a try following an exquisite pass, and the fly-half’s conversion made it 19-14 at half-time. 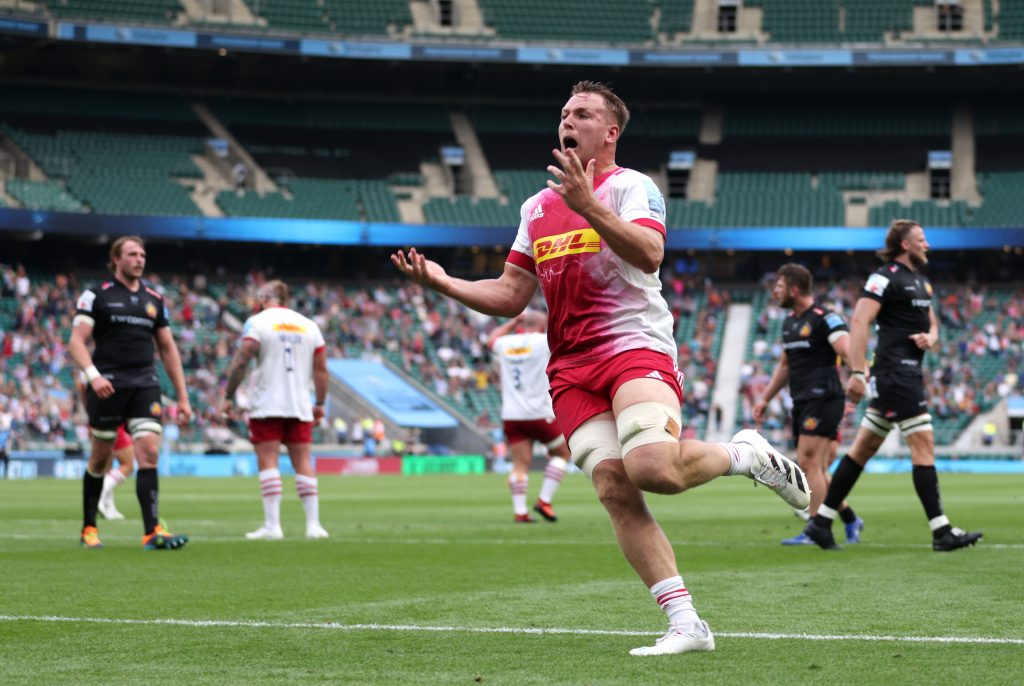 Quins began the second half exactly as they ended the first – in try-scoring mode.

Brilliant handling between backs and forwards produced a flowing move that ended when Marchant sent his midfield partner Esterhuizen over for Quins’ fourth try, with Smith’s touchline conversion opening up a 12-point gap.

Hogg had joined the action by this stage, replacing an injured Alex Cuthbert and a pulsating final continued at an extraordinary pace as Chiefs number eight Sam Simmonds claimed his 21st Premiership try of the season, with his brother’s conversion making it 26-21 after 50 minutes.

Exeter took a total of five minutes to wipe out a worrying deficit, with Joe Simmonds slicing open Quins’ defence and sending centre Ollie Devoto over for a try.

The Chiefs then sensed a fifth touchdown as Quins showed signs of tiring, but it was a Joe Simmonds penalty that took them past 30 points with 14 minutes left, before the late Lynagh-inspired drama.