Analysis: The small things Beauden Barrett has brought to the Blues that are bringing big results

The high-profile addition of Beauden Barrett to the Blues hasn’t yet produced the highlight reel plays he has been known for, but his arrival in Super Rugby Aotearoa has slowly sharpened aspects of the Blues’ game that were lacking in previous seasons.

Against the Hurricanes two weeks ago, the Blues were able to profit from a much more potent transition attack, which ripped the visitors apart multiple times in the first half.

The Blues of the last few seasons would not be so organised to capitalise on such windows in a game, but their ability to strike now in transtion has been amplified having a game driver like Barrett who is used to playing a faster game and usually thrives in these moments.

With Rieko Ioane, Mark Telea and Caleb Clarke out wide, the Blues have speed to burn that has often gone underutilized in past seasons. The Otere Black-Beauden Barrett link is getting them fast ball against compromised defence like never before.

Early in the first half, the Blues have received a box kick on the right hand side below. The Hurricanes kick-chase unit hasn’t effectively spread out, crowding the ruck. 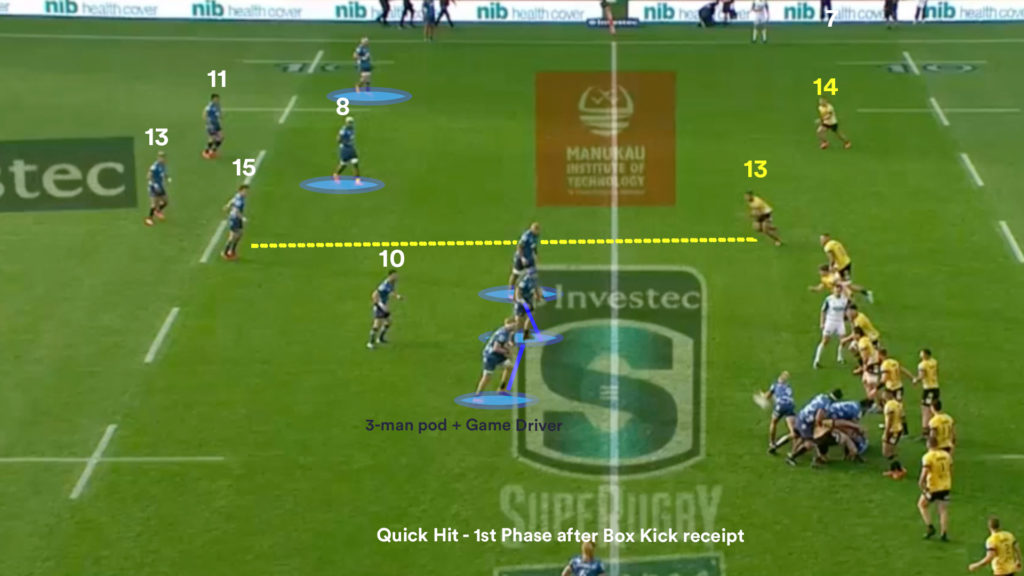 Instead of carrying with the 3-man pod, as they may have in the past, the Blues strike immediately on the first phase after the kick receipt whilst the Hurricanes defence is still in this transition from kick-chase to phase play. 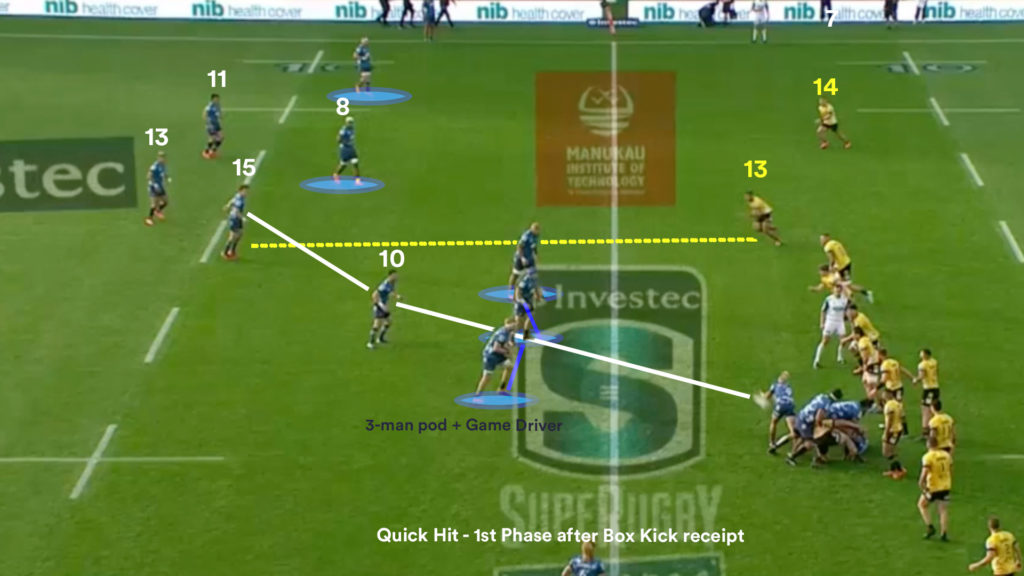 Sam Nock (9) bypasses his forward pod to link directly with Otere Black (10) who has Beauden Barrett (15) outside him.

Hurricanes centre Vince Aso (13) knows that Beauden Barrett is the likely man to release to the outside where Clarke, Sotutu, Ioane and Gibson are stationed.

Very early he realises that he must shut down this link, given his only outside help is Wes Goosen. He attempts to close off the edge by blitzing Barrett. 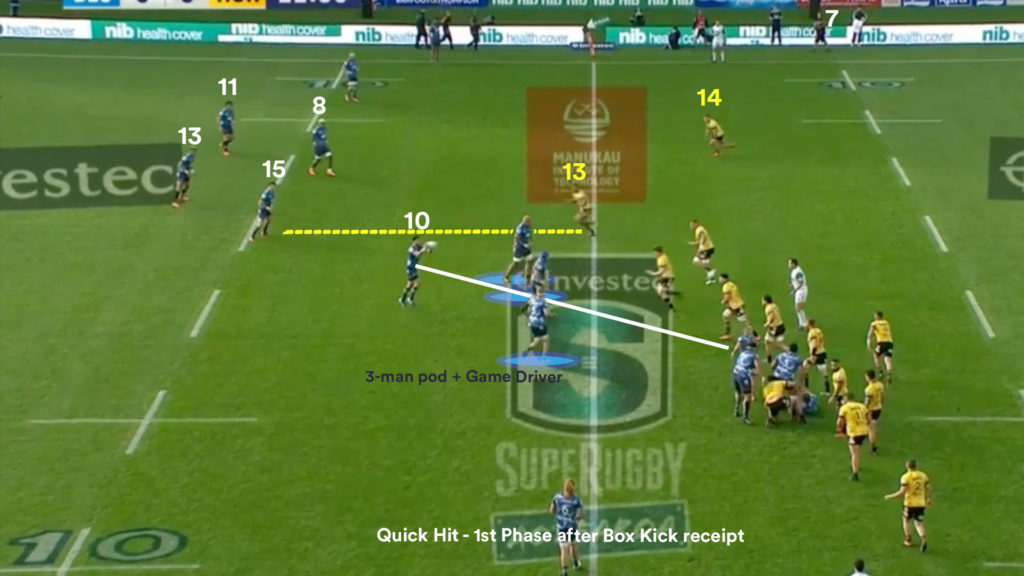 This play also shows how far Otere Black has come as a playmaker this year.

A younger Black would not have adjusted on the fly and shown the confidence to make this play. 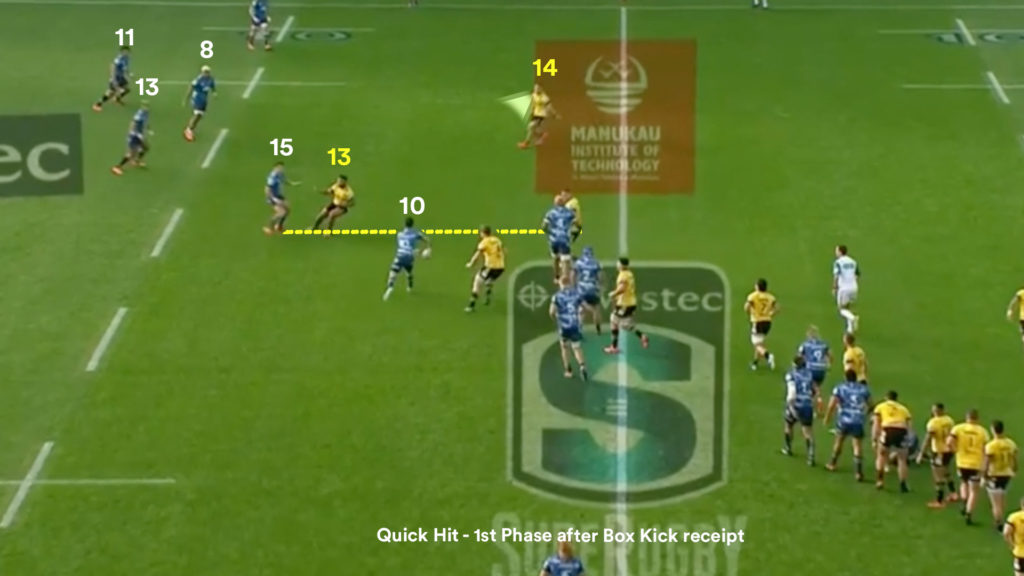 Realising that Aso has closed his link with Barrett, Black double pumps to abandon his pass to the fullback and plays an incredible pass behind Aso into the lane.

This anticipatory pass is a high-level play by Black requiring pinpoint execution and extreme trust in Rieko Ioane.

Vince Aso could potentially snatch the ball or bat it backward, while Wes Goosen (14) could undercut it and also take the intercept as it is in front of him and in his line of sight.

At the release point by Black, Ioane has not started his required line. Ioane has to read the cue and be there for Black’s lead pass. 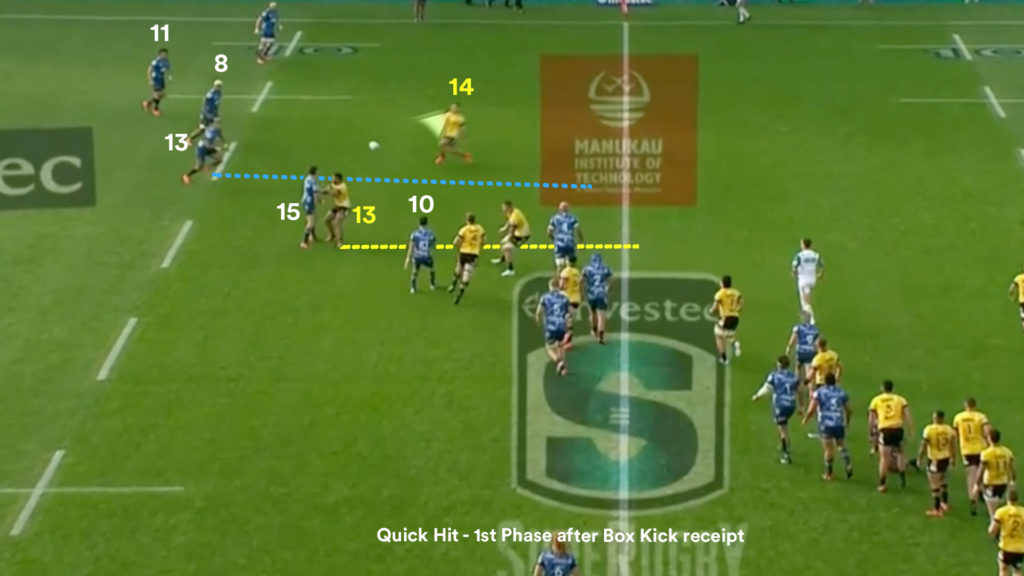 Ioane did come to the party, straightening his line to ensure Goosen couldn’t undercut the ball.

The centre exploded onto the ball and broke away downfield before linking up with his outside man. 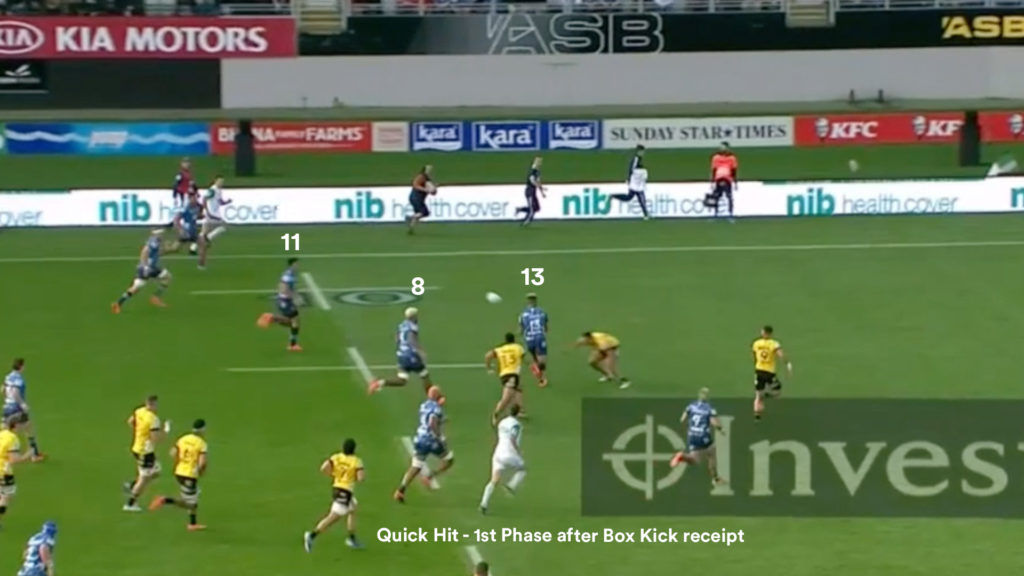 Caleb Clarke cut back through the cover defence and scored the first try.

Barrett had zero involvement with the ball on this occasion, with Black adjusting and making a magnificent play.

It was clear however, that the Nock-Black-Barrett communication link was operating effectively to attack wide directly off the kick receipt, of which Barrett is a part of and perhaps helped shaped the strategy for.

Later in the match, another Hurricanes box kick is caught in the backfield, this time by Hoskins Sotutu, who powers through some weak tackles to set up a ruck just over halfway. 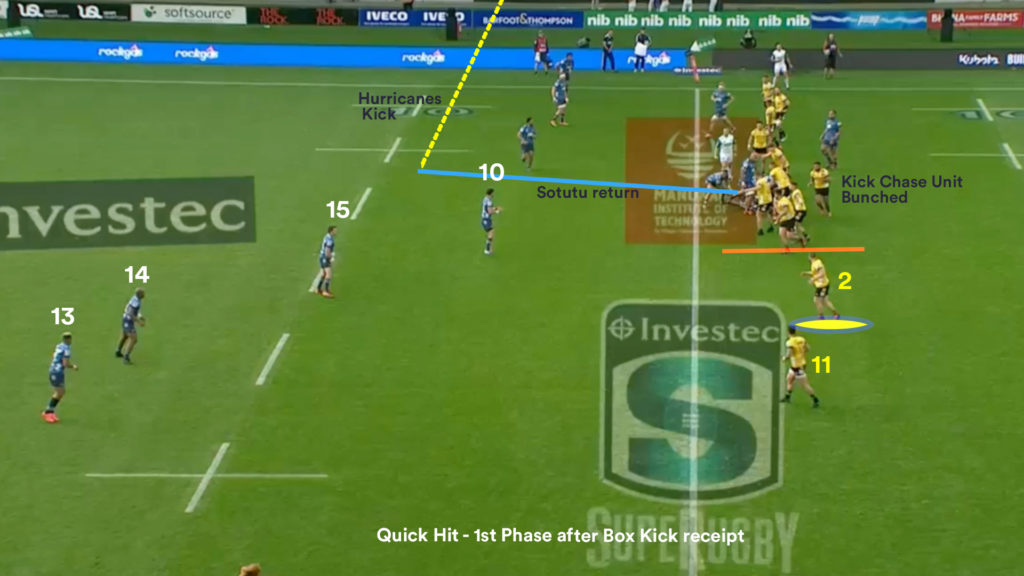 The Hurricanes kick-chase line is again crowded around the ruck and blindside, leaving Dane Coles (2) and Ben Lam (11) quite thin on the openside.

The Black-Barrett link is again set up to distribute the ball where the Blues can take advantage of a mismatch on Coles.

The Hurricanes hooker does have a turn of pace with ball-in-hand, but defending one-on-one against Telea or Ioane is a stretch for the 33-year-old. 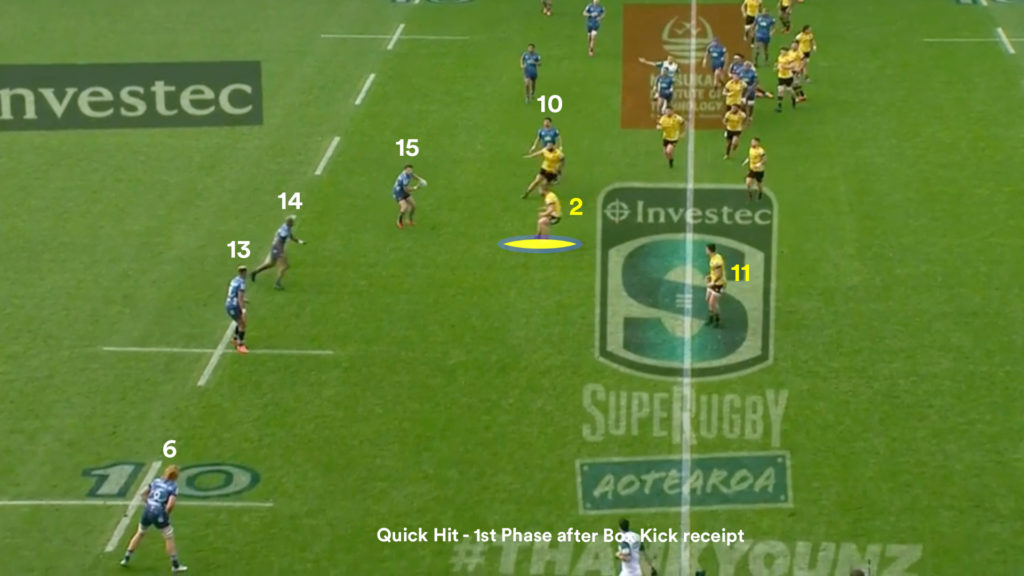 The Hurricanes are forced to play a non-commital jockey defence so Barrett decides to give some early ball to the fastest man on the field to take some easy metres. 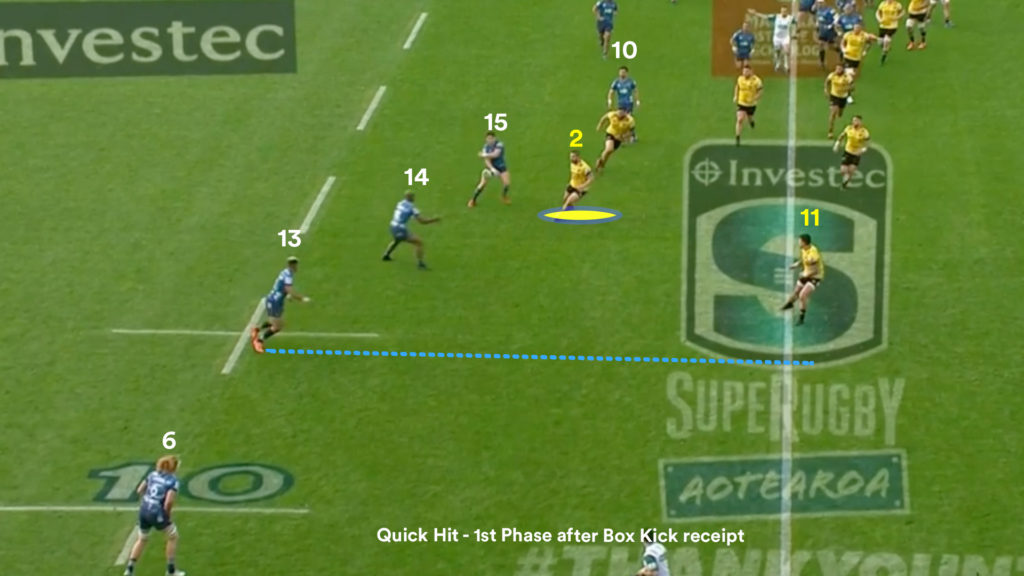 Reiko Ioane (13) is given another opportunity in space to use his speed and ultimately threads a short grubber kick in behind to pressure the Hurricanes. 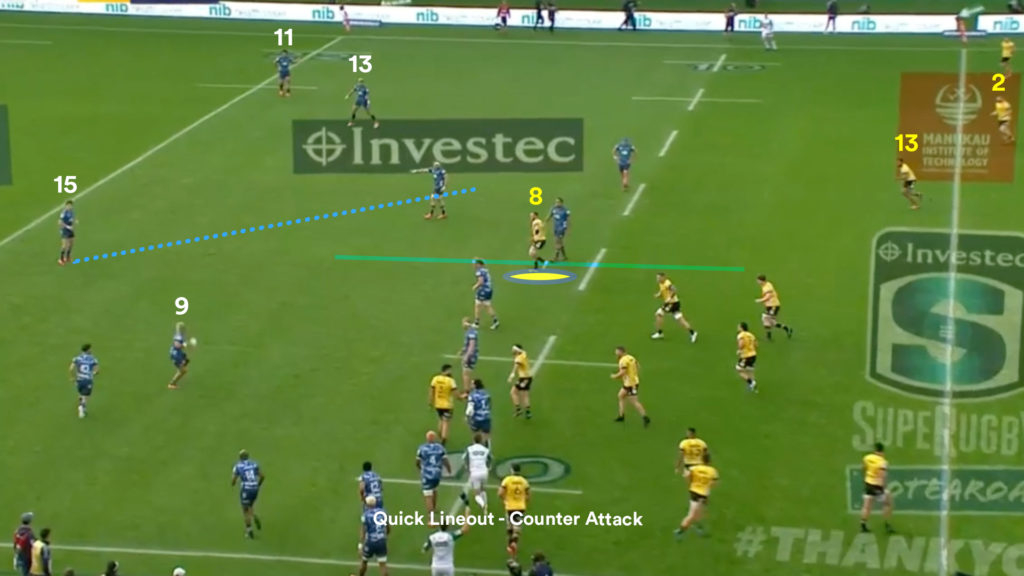 Later in the first half, the Blues run a quick lineout and again look to expose the Hurricanes on the far side during the transition.

The call is made early and halfback Nock (9) receives the ball from the quick lineout.

The Hurricanes are once again extremely vulnerable on the far side outside of Number 8 Gareth Evans, where Barrett will be used as the link to get the ball to. 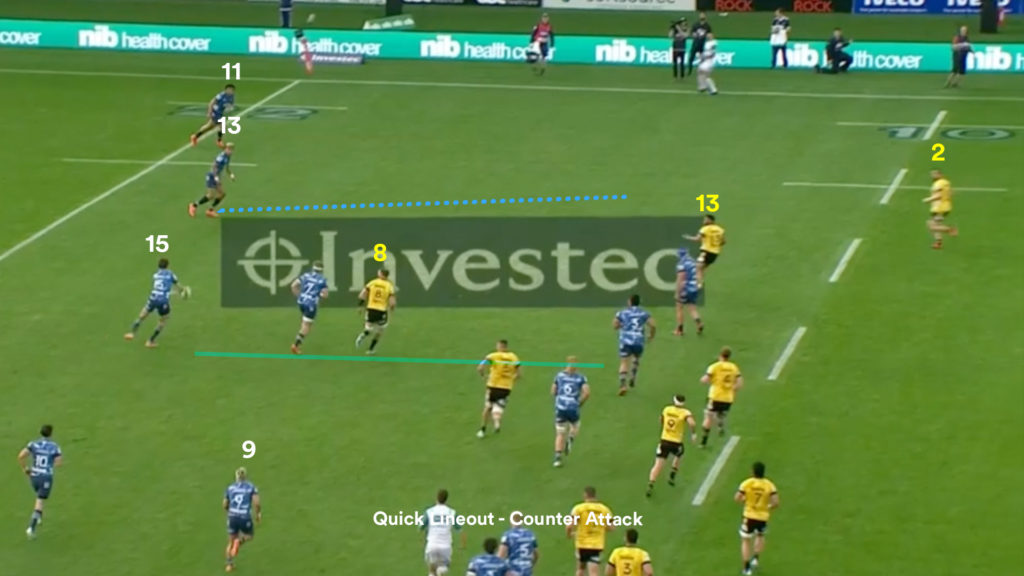 Joining in from deep, Barrett once again offers Ioane early ball to do his work.

Against a stretched jockey defence and acres of space to wind up, Ioane is a major problem for the Hurricanes. 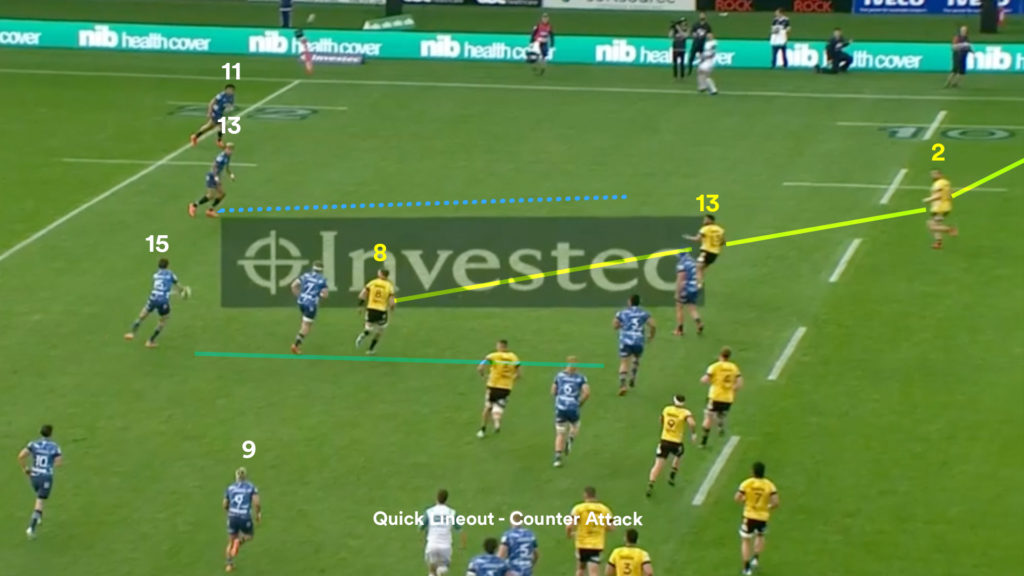 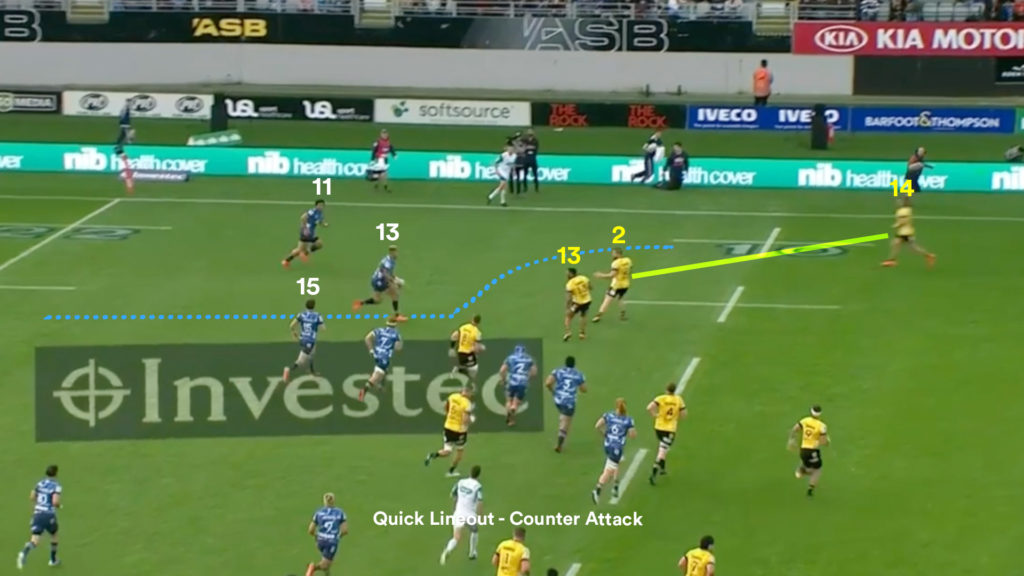 A breakdown in spacing by Aso and Coles allows Ioane to bounce out on the slower Coles.

Goosen is forced to bite in to stop Ioane, while the centre is able to free Clarke with a deft offload. 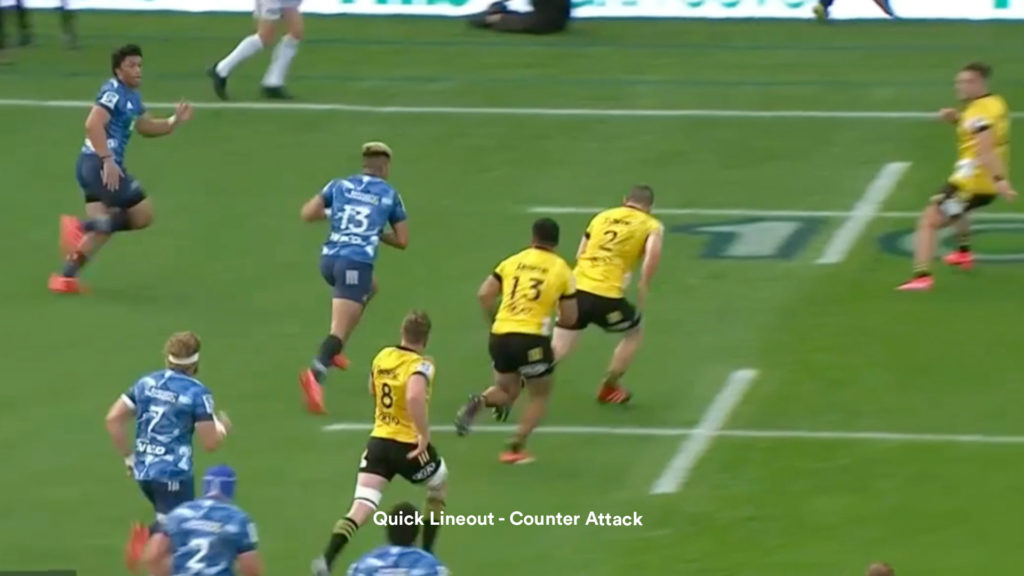 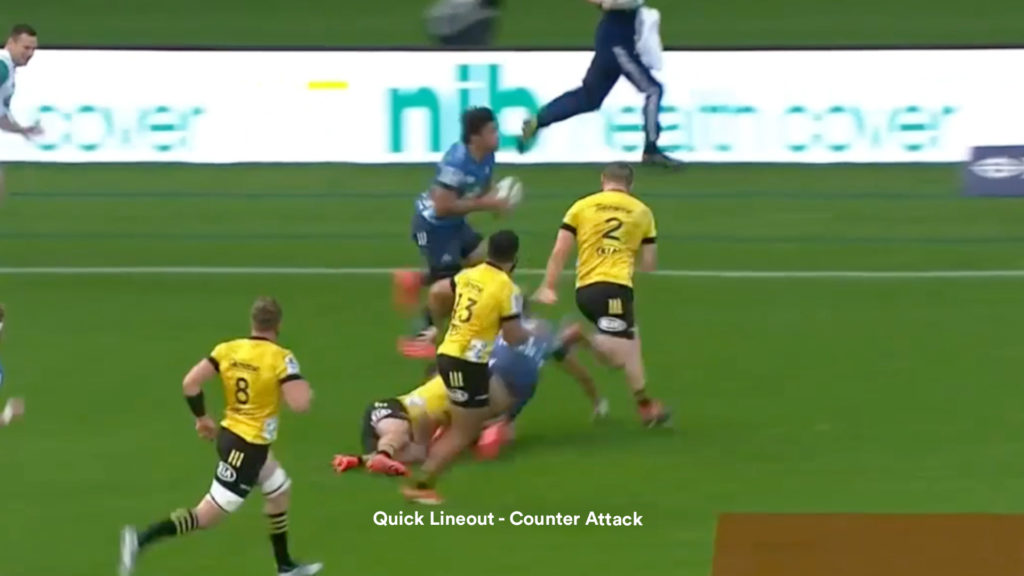 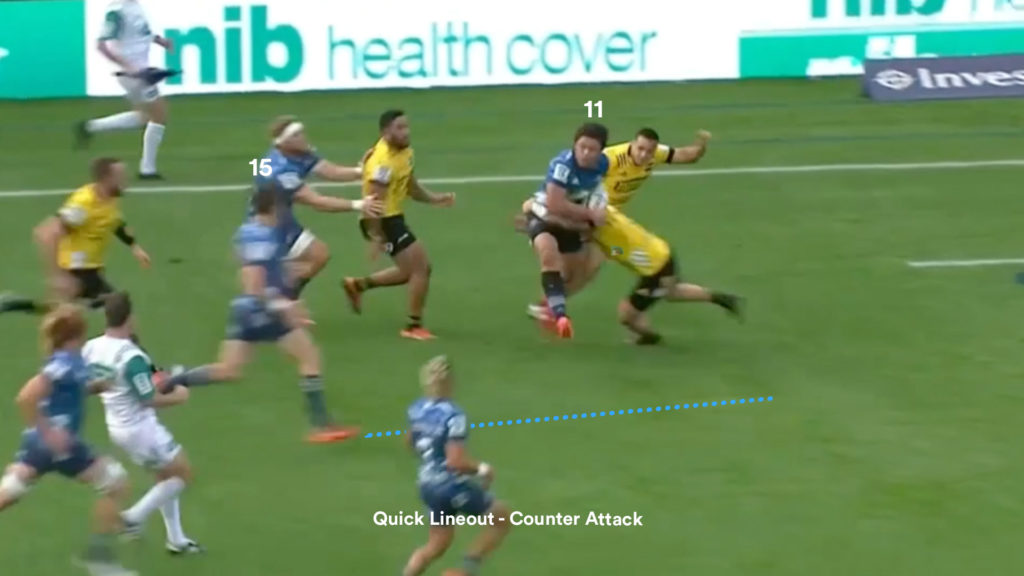 They miss a guaranteed seven points when Clarke fails to find Barrett backing up on the inside, but the Blues transition attacking game is looking ominous just 30 minutes into Barrett’s Blues debut. 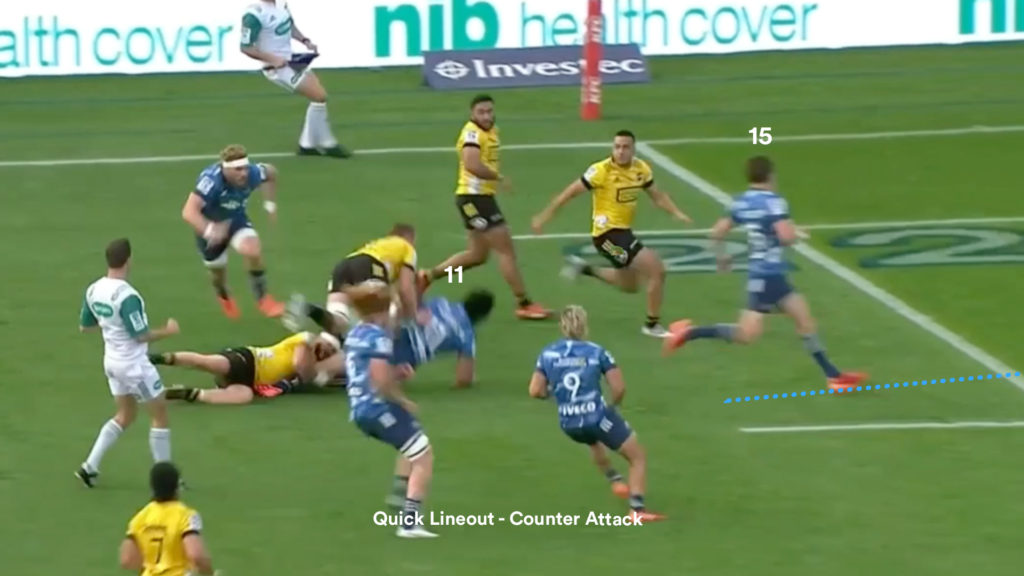 With Barrett playing a second receiver role inside his centre Ioane, the Blues have two quality distributors to organise wide attacks and maximise the talents of there previously underused weapons.

They did this brilliantly against the Hurricanes, making them pay for overcrowding the rucks following their exit kicks, and found a way to get quality ball to Rieko Ioane frequently.

The Blues could just have easily failed to capitalise on these situations by not relaying the information quickly enough to the halfback, who needs to know whether to play his forward runners or find Otere Black.

This has been the problem for the Blues in the past, resulting in the likes of Ioane and Clarke standing out on the edge fighting boredom.

It is likely this strategy was well-prepared prior to the match with Barrett well aware of the Hurricanes strengths and weaknesses.

Having Barrett in the backfield is not just about the strikes they can launch in transition, he is a world-class tactician that can control the territory from the back.

Surprisingly, the Blues are having success with a low contestable kick rate, instead opting to drive long kicks downfield and keeping them in play.

It is a dangerous ploy against strong counter-attack teams, as illustrated against the Chiefs in the fifth minute when Sean Wainui found a crease and slid through down into Blues’ 22.

But the strategy all plays into a bigger purpose in Barrett’s game of kick tennis designed to create fractured chase lines and works best against inaccurate kickers. 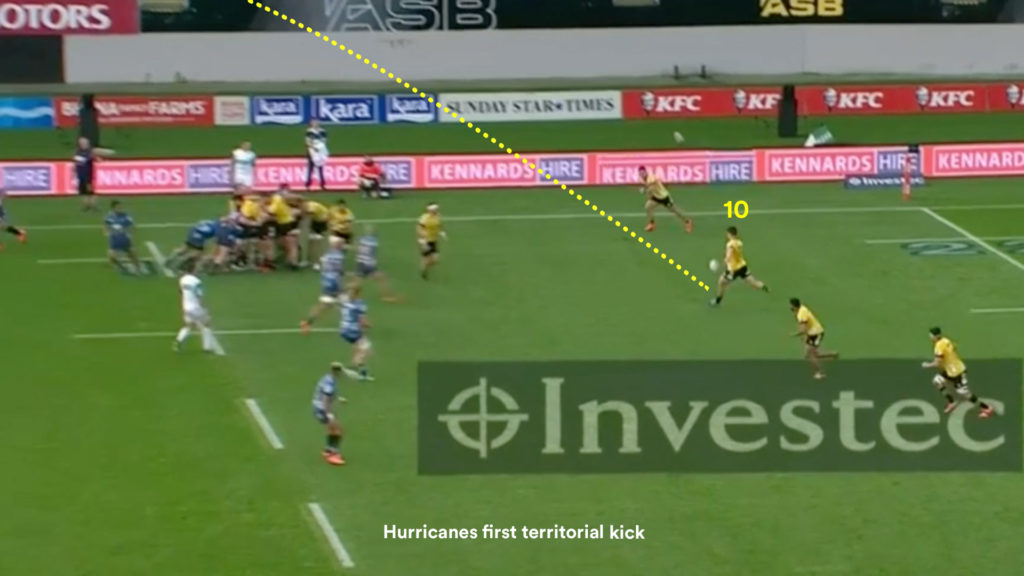 Often, it seems Barrett actually intends to find the team’s designated kicker in the backfield on a returning kick.

After receiving a kick from Jackson Garden-Bachop, Barrett drives the ball long and directly back to him. 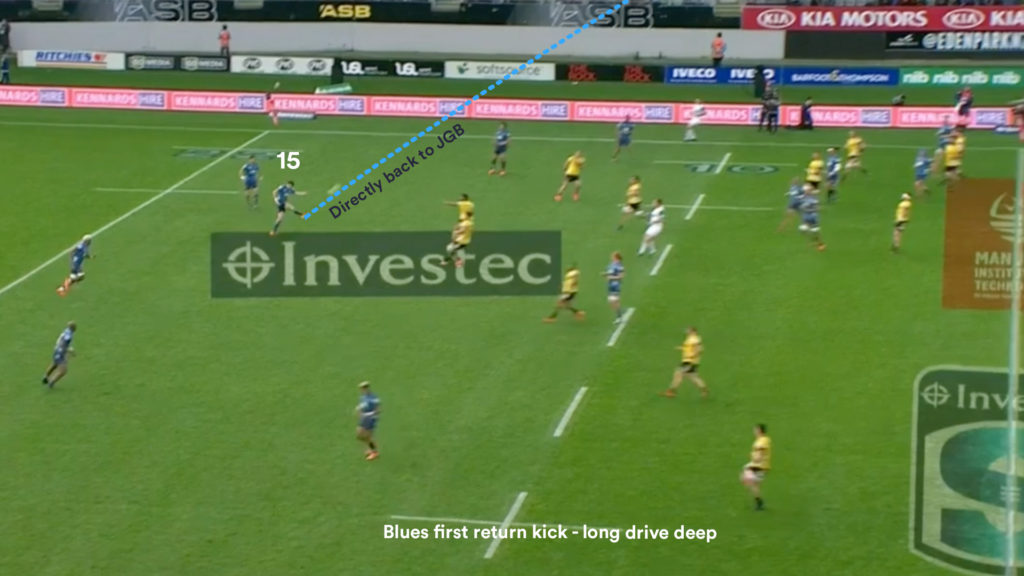 It seems odd to just kick it down their throat but he knows finding their kicker will likely result in a return serve, the opposition’s second kick.

This time, however, another member of the backfield will have to chase in search of a contest as everyone else will be offside, having chased the first one strongly. 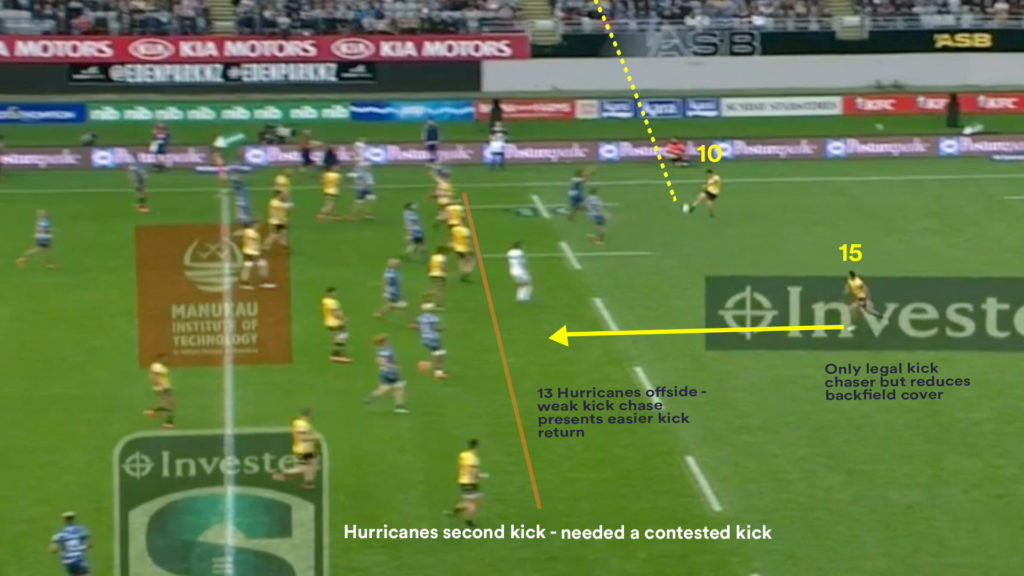 Only Chase Tiatia was onside and able to follow Garden-Bachop’s second kick, with 13 other Hurricanes unable to give an aggressive chase.

Using Tiatia as the kick chase unit also reduces cover in the backfield down to just one man, Garden-Bachop, so now the Hurricanes are compromised.

The second time Barrett or the Blues field a kick in the backfield there will either be opportunities to counter-attack against a weak chase line or there will space to find grass with a kick now with just one man in the backfield.

The risk, of course, is that they lose the kick contest, but in this case, Garden-Bachop’s second kick is too long and uncontested and is easily fielded by Otere Black. 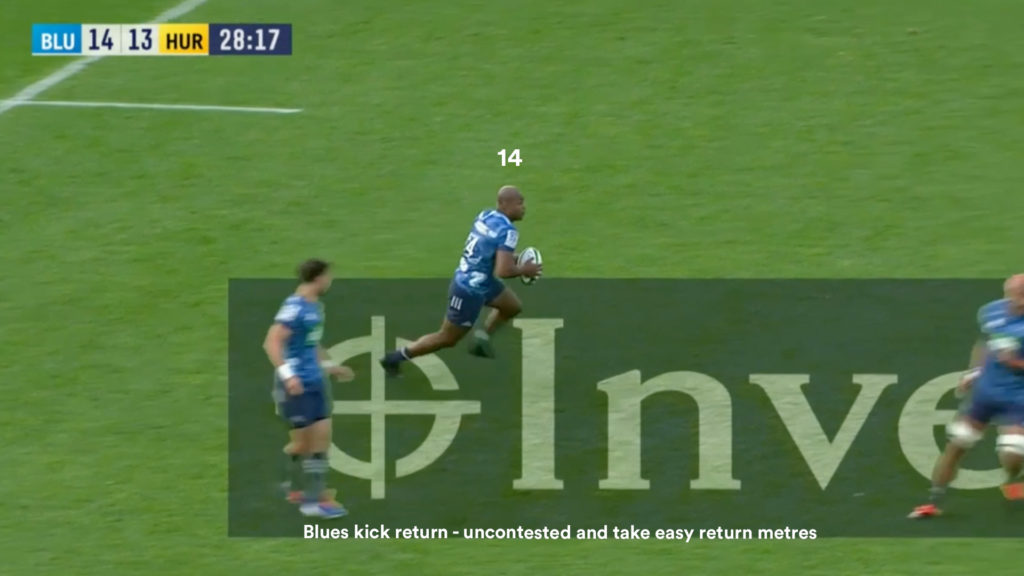 Facing a weak kick chase, Black finds Mark Telea (14) who is able to steam ahead and make easy metres on the kick return.

And without Chase Tiatia in the backfield anymore, Beauden Barrett is able to step up on the next phase and hammer a long drive that this time finds the grass. 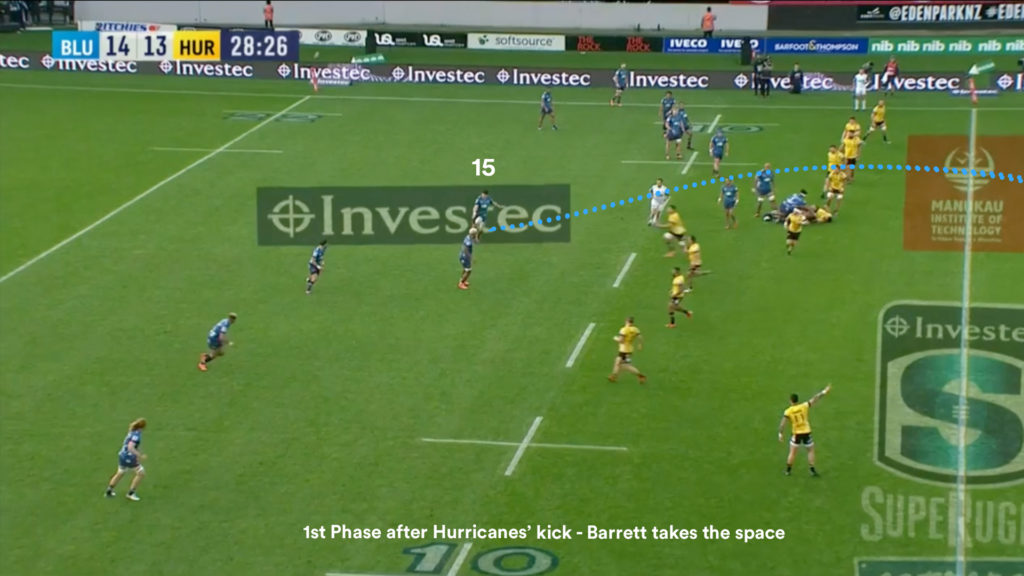 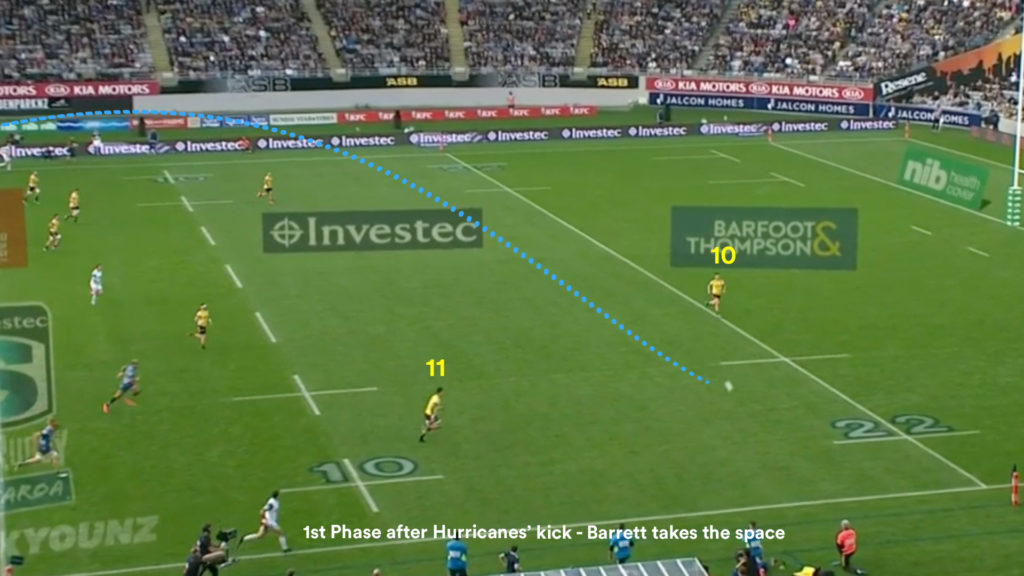 Jackson Garden-Bachop is all alone in the backfield and has lost the kick battle.

Even if he puts it into touch from the safety of the 22, he will give the Blues an attacking lineout to launch from around the same place his original kick was on the opposite side. He might as well have kicked the first one out on the full.

Instead, he tries to run it back and is caught by the Blues loose forwards and his side is put under immense pressure. 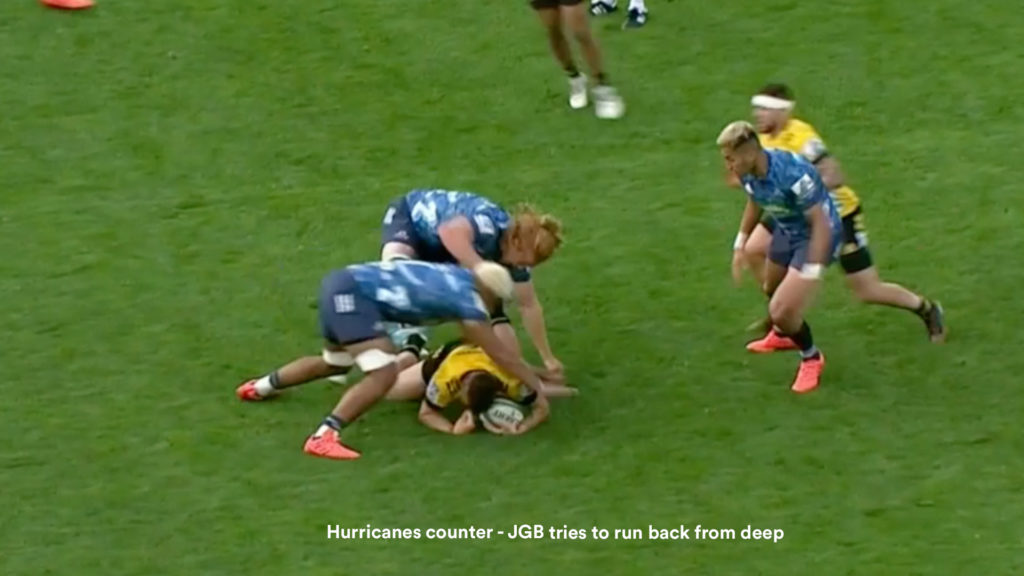 All of which is intended by Barrett in the game of force back.

Without a contest on the second kick, the Hurricanes had a weak backfield and a weak kick-chase line – a double blow.

The Blues seem content on hammering kicks long and playing this game but it won’t work as effectively against teams with strong aerial skills and accurate kickers.

The Chiefs with McKenzie and Cruden kept the Blues honest in the aerial warfare but lost the game in other areas.

The Hurricanes, with Barrett, in last year’s Super Rugby semi-final came unstuck against the Crusaders who returned Barrett’s long drives with accurate, contestable kicks or countered with huge periods of controlled possession, strangling the Hurricanes out of the game.

It takes errant kicking on behalf of the opposition for Barrett to win the territorial wrestle this way.

The beauty of possessing a skilled operator like Barrett in the backfield is he can control territory or turn a moment’s weakness into an opportunity for his side, and he is usually pretty good at deciding which one to do.

It might not seem like he has lit the world on fire, but he has ignited the Blues backs.

If Ioane, Clarke and Telea keep clocking over 100 metres and finding breaks then it is likely Barrett has done his job.

Analysis: The small things Beauden Barrett has brought to the Blues that are bringing big results