All Blacks reject Kafer claims Next
Back
Internationals

Things weren’t meant to pan out the way that they did in Perth on Saturday night as the Wallabies unexpectedly trounced the All Blacks in a record 47-26 victory.

The reigning back-to-back world champions hadn’t been overly convincing in their opening two matches of 2019, with the Pumas unlucky not to notch a maiden win over the Kiwis, while the Springboks held the New Zealanders to a draw in their own backyard.

Nevertheless, the bumbling Wallabies presented Steve Hansen’s side with an opportunity to iron out the creases that had plagued his team in Buenos Aires and Wellington.

The Richie Mo’unga-Beauden Barrett dual playmaking axis was handed another chance to prove its worth after an underwhelming debut in the 16-all draw at Westpac Stadium.

In the pack, a new-look loose forward trio of Ardie Savea, Sam Cane and Kieran Read was one that was eagerly-anticipated, while the return of Scott Barrett should have aided the injury-enforced absence of Brodie Retallick.

Together, these combinations and selections helped form what Hansen labelled as his best available side.

It was a team that was crafted to be unleashed on a seemingly vulnerable and misfiring Australian outfit, one which had only a couple of weeks earlier been thrashed by South Africa in Johannesburg and scraped home against Argentina in Brisbane.

With the World Cup just a matter of weeks away, Saturday’s match appeared to be the best time to unveil arguably the strongest XV that the All Blacks could muster and let them rip into their work against the hapless Wallabies.

What transpired at Optus Stadium, however, was an 80-minute performance that completely tore up the pre-match script.

Nobody expected the lowly Wallabies to play with such intent, desire and hunger to win, but, with ever-determined captain Michael Hooper at the forefront of their victorious charge, the All Blacks were made to look foolish.

A controversial red card to Scott Barrett obviously played a key role in the result, but it was the All Blacks’ defensive lapses, dumb handling errors and poor ball retention that landed themselves in a losing position.

More significantly is that once the All Blacks played themselves into such a dire state, the Wallabies exploited their opposition’s mishaps to full effect.

They were outmuscled by the more mobile – albeit more heavily-manned – Australian tight five, with Hooper portraying outstanding leadership from openside flanker.

In the backline, the guidance of ex-Brumbies teammates Nic White and Christian Lealiifano was exceptional, with those outside of them shining as a result of their tactical nous and dictatorship of the pace of the game.

Second-five Samu Kerevi, wing Reece Hodge and fullback Kurtley Beale were among the standouts who reaped plaudits for their efforts in Western Australia, but perhaps the most positive outcome for the Wallabies from their first Bledisloe encounter of the year was the display of James O’Connor.

Everyone knows the backstory of this once-troubled youngster, who had exponential amounts of potential in his early years of professional rugby in Australia, only for it to go begging for six years following numerous off-field instances involving drugs and alcohol.

Returning to the national set-up for the first time since 2013 during his team’s 16-10 win over the Pumas, the 29-year-old utility back was promoted from the bench to the run-on squad for the Kiwi clash, earning his first start in the No 13 jersey at test level.

It was a promotion Wallabies head coach Michael Cheika must be ecstatic with.

Six years away in the European club scene did O’Connor no harm in his new role alongside Kerevi in the midfield, a partnership of which looks destined to be a staple of the Wallabies’ make-up leading into the World Cup.

Finishing the match with 67 running metres from 11 carries and two superb try assists – the first of which eliminated two defenders to set Hodge 50 metres away downfield, the other a simple long ball which again found Hodge deep inside the opposition 22 – O’Connor’s transition back into test rugby has been nothing short of seamless. 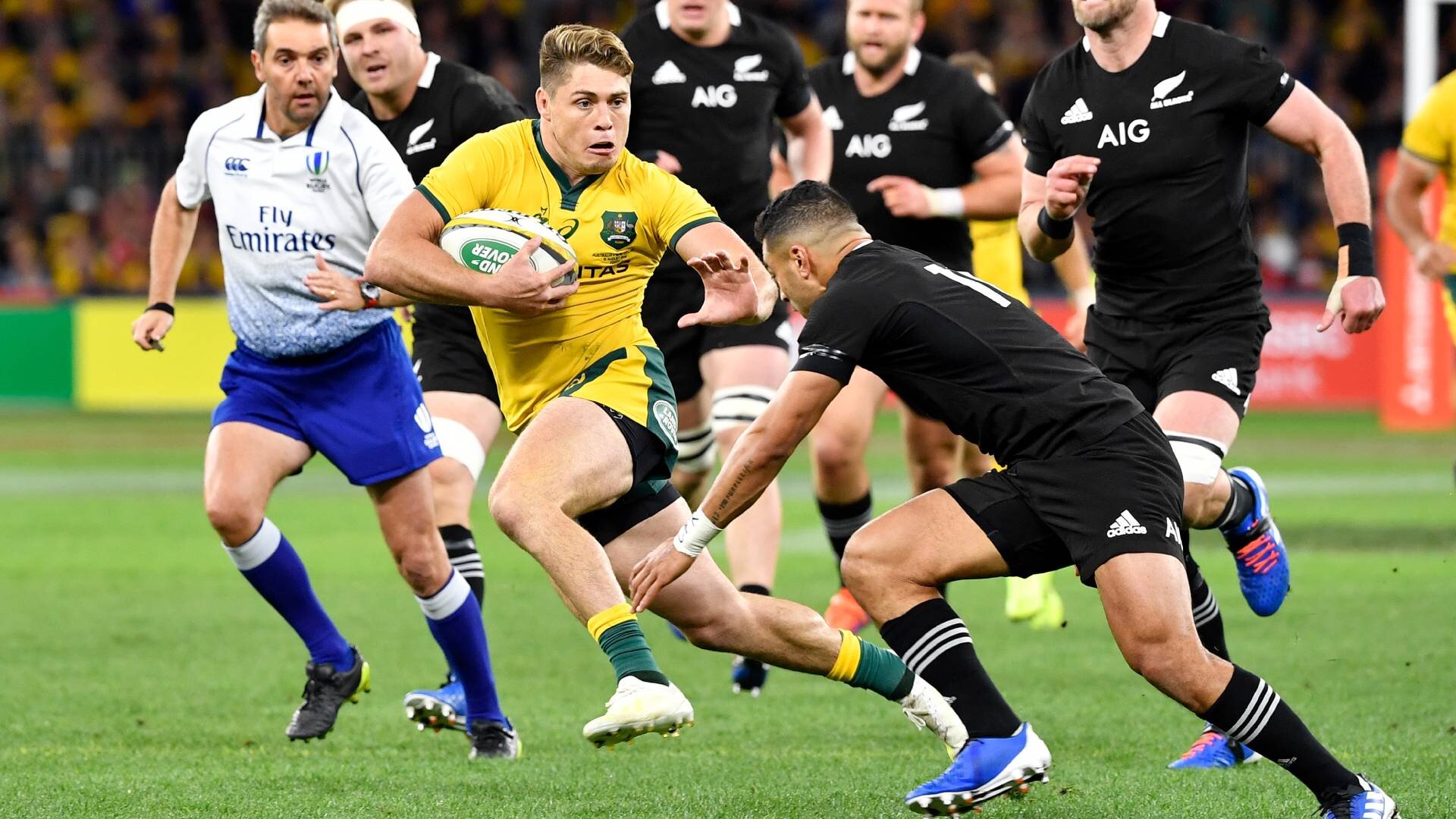 James O’Connor was superb against the All Blacks. (Photo by Stefan Gosatti/Getty Images)

His first try assist for Hodge was an illustration of class with ball in hand, and while he offers the Wallabies with immense versatility throughout the backline, it’s in his newfound position of centre where O’Connor could prove to be a masterstroke selection by Cheika and new Australian director of rugby Scott Johnson.

For too long the Wallabies had been without a sturdy midfield duo, with Hodge, Beale, Matt Giteau, Matt Toomua, Bernard Foley and Tevita Kuridrani all tried and tested option, but all failing to establish their mark.

Only Kerevi has lasted as a viable option in the midfield at international level, and for all the talent and experience that those other candidates provided, none could counter the strengths and weaknesses that the Reds star brought to the table.

That was until Johnson took a leap of faith in luring O’Connor back from the United Kingdom, a move most saw as an act of desperation, but has, in fact, turned into a piece of genius recruitment.

O’Connor’s support lines and distribution skills, combined with the electric impetus he brings which helped him make his name as an excitement machine all those years ago, not only indicates a growth in on-field maturity, but it also complements the hard-running, power-based style of play that Kerevi wields.

When both players’ skillsets are brought together, as was the case in Perth, it forms a lethal combination.

The complacent All Blacks found that out the hard way, as the pair directly involved in half of their team’s tries, with Beauden Barrett used as a speed bump by Kerevi en route to Nic White’s scintillating try. 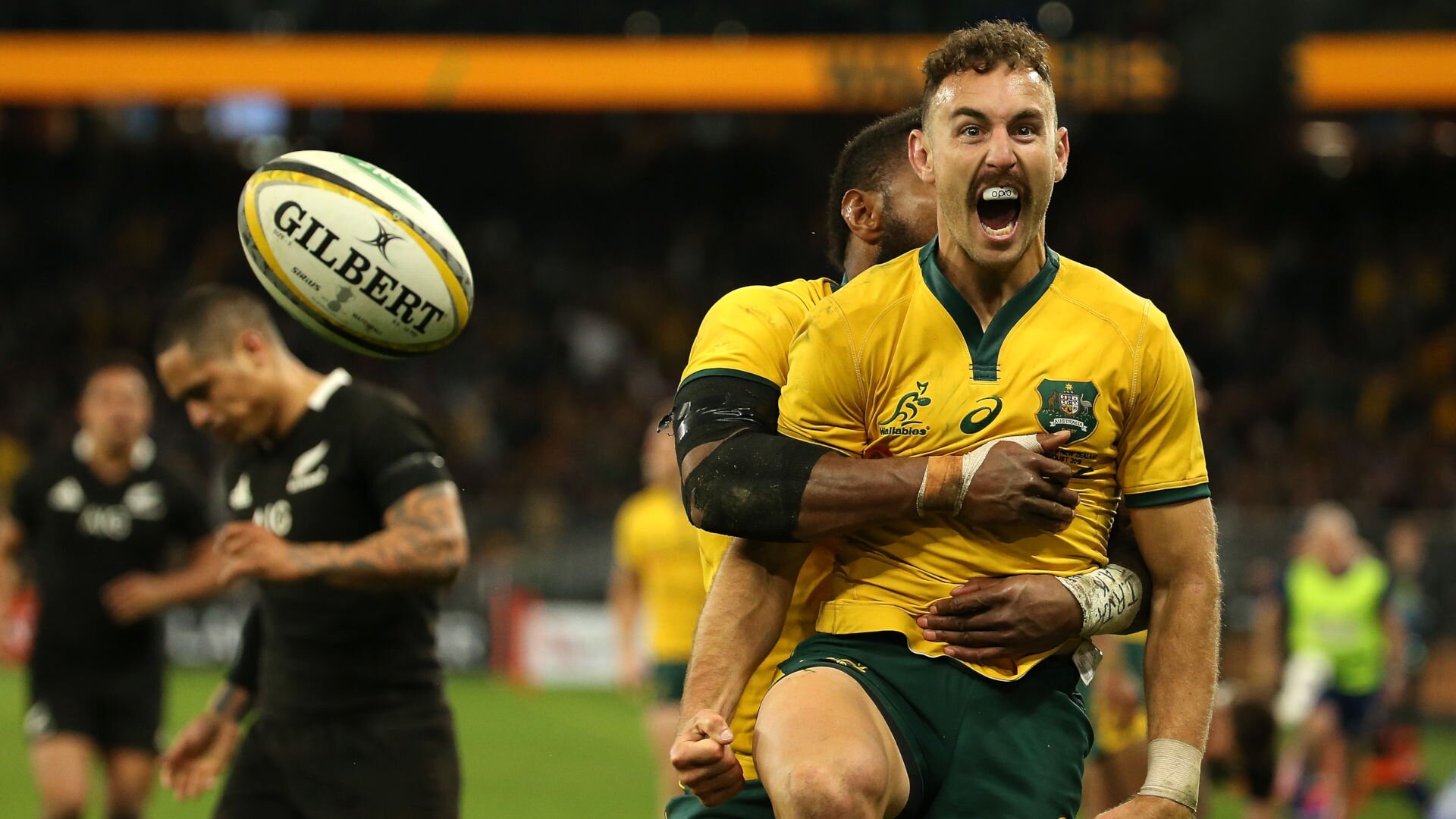 Nic White celebrates his try against the All Blacks. (Photo / Getty Images)

Determined to avoid a repeat of Saturday’s result, which would see them lose the Bledisloe Cup for the first time since 2002, preventing Kerevi and O’Connor from making any kind of headway must be imperative for the All Blacks at Eden Park this week.

Returning midfield star Sonny Bill Williams outlined that much on Tuesday, reserving praise for Kerevi, who he will likely mark should both be selected for this Saturday’s re-match.

“The way he’s played all year, leading line break or tackle break [stats] throughout Super Rugby, it just shows that he’s just continuing his form that he showed throughout the year,” Williams said.

“He’s definitely one we need to watch out for this weekend.”

While he presents a different kind of threat, that last sentence is equally applicable for O’Connor, as without him, the Kerevi’s impact wouldn’t be as influential, and the Australian rugby faithful have Cheika and Johnson to thank for that.

In saying that, the Kiwis will remain favourites to retain their second-most prized possession when both sides to battle in Auckland in four days’ time.

However, if Williams and his national teammates don’t nullify the danger posed by the in-form midfielders, it won’t just be another pre-match script that’s ripped apart, but New Zealand’s domination of the Bledisloe Cup will be obliterated.