Jones' tribute to two-try May Next
Back
Internationals

WALES PLAYER RATINGS: A must-win Autumn Nations Cup match for Wayne Pivac and Wales, with the spectre of seven losses in a row too bleak to bear.

Wales named three uncapped players in their starting XV, with thirteen changes from the side that lost to Ireland. Conditions made this game a thankless task for the Welsh boys and they’ll be happy to exit with the ‘W’ and move on.

Individual performances would inevitably suffer at the hands of the inclement weather, so ratings must be taken with that sizeable caveat. Without any further ado, here are our Wales player ratings:

1. WYN JONES – 7
Went after the Georgians at their power source – the scrum – and won two early penalties off the massive unit that is Georgian tighthead Beka Gigashvili. At 28 years of age still has time to truly make the Welsh loosehead jersey his own.

2. ELLIOT DEE – 7.5
Seemed to score a try before the ball was recycled in the lead up to Rees-Zammit’s try, although Luke Pearce didn’t notice. A beastly king hit from the hooker saw giant Georgian lock Konstantin Mikautadze taken off with a shoulder injury. It summed up what was a powerful and pleasingly aggressive performance.

3. SAMSON LEE – 6
An immovable force in the scrums, so that was job done for Lee, who’s a scrummager first and, well… a scrummager second too.

4. JAKE BALL – 6
One of Wales’ go to carriers in the tight, it was largely a job of sneaking one or two-metre gains against what was a stoical Georgian defensive wall.

5. SEB DAVIES – 5
Failed to get any change out of the Georgians in his one on one collisions. A scrappy game that largely passed the young Cardiff Blues lock by.

6. JAMES BOTHAM – 6
Beefy’s grandson grabbed a lot headlines in the lead up today’s game, so maybe he’s debut was never going to quite match the hype. After a bright start, seemed to spend a lot of the first half straddling the sidelines when Wales had possession. Was a constant physical presence. At one stage was left with just a flyhalf between him and the try line but he ended up conceding a penalty, seemingly unaware of whether or not the referee had blown it up.

7. JUSTIN TIPURIC – 7
Excelled over the ball in the first half and was a persistent thorn in the Georgian side in both defence and attack. A needless swinging arm ended his afternoon.

8. AARON WAINWRIGHT – 7
Selected out of position at No.8, the Dragons forward was on a mission to impress with ball in hand, and was willing and available for work, even if he didn’t always get the returns he’d have liked. Tireless and deserved his Man of the Match award, even if it was largely by default. 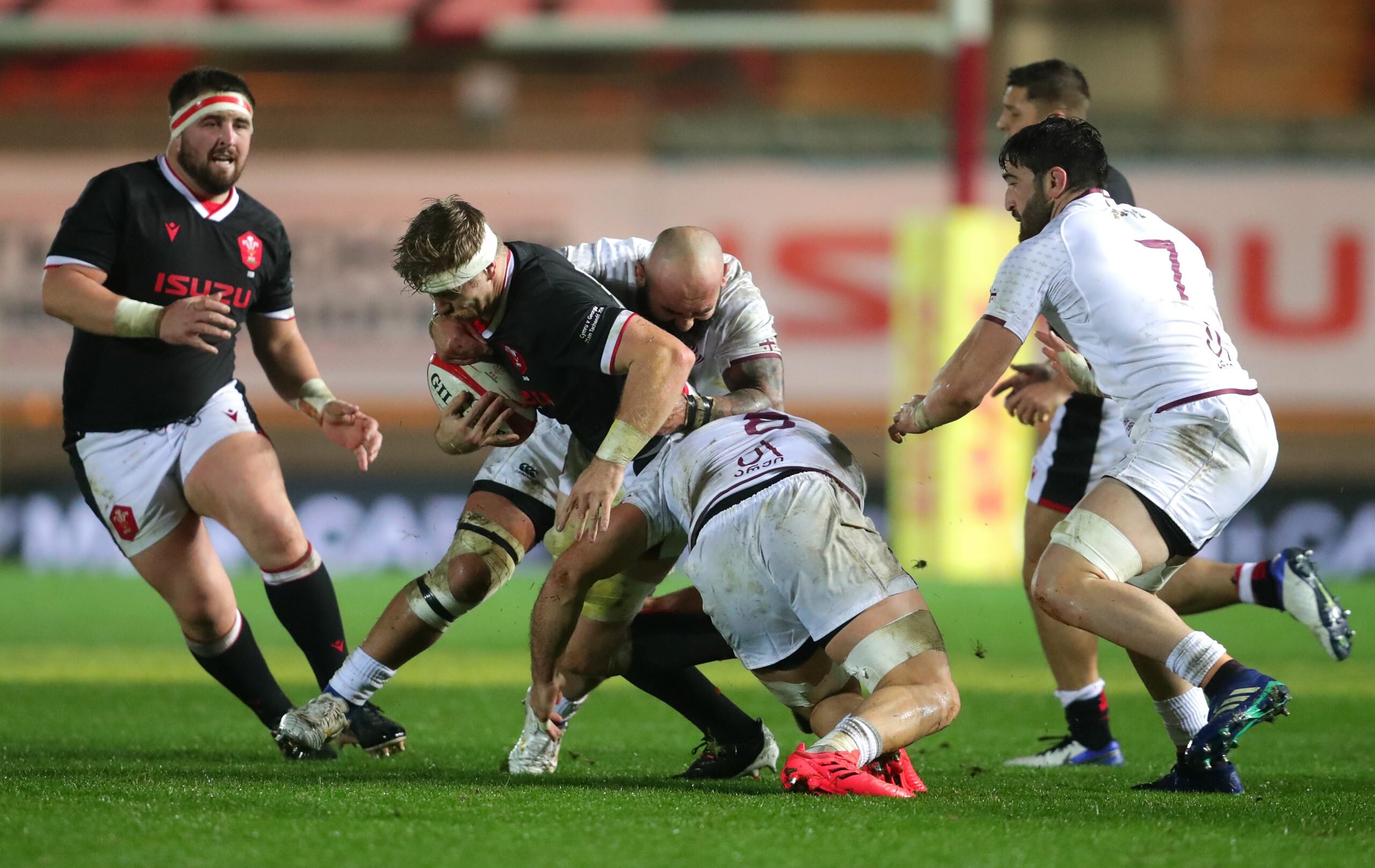 9. KIERAN HARDY – 7.5
Hardy made his debut at his regional home ground and he looked sharp. He’s a fine, crisp passer of the ball and has a properly explosive break. One of half an of exciting halfback double act.

10. CALLUM SHEEDY – 8
An early penalty eased his nerves and it was clear that the highly-rated Bristol flyhalf looked comfortable bringing the ball to the line, something you don’t necessarily get with any great frequency from Rhys Patchell or Dan Biggar. The only criticism that the gameplan he executed didn’t quite match the conditions in front of him.

11. LOUIS REES-ZAMMIT – 7.5
A  little eager to impress and early fumbles of an admittedly greasy ball will have annoyed the rising star. Desperately unlucky not to score twice in the first quarter, before eventually scoring with his third attempt. Opened up with a 35-metre run in the 55th minute, before nice hands put Rhys Webb away in the 75th. 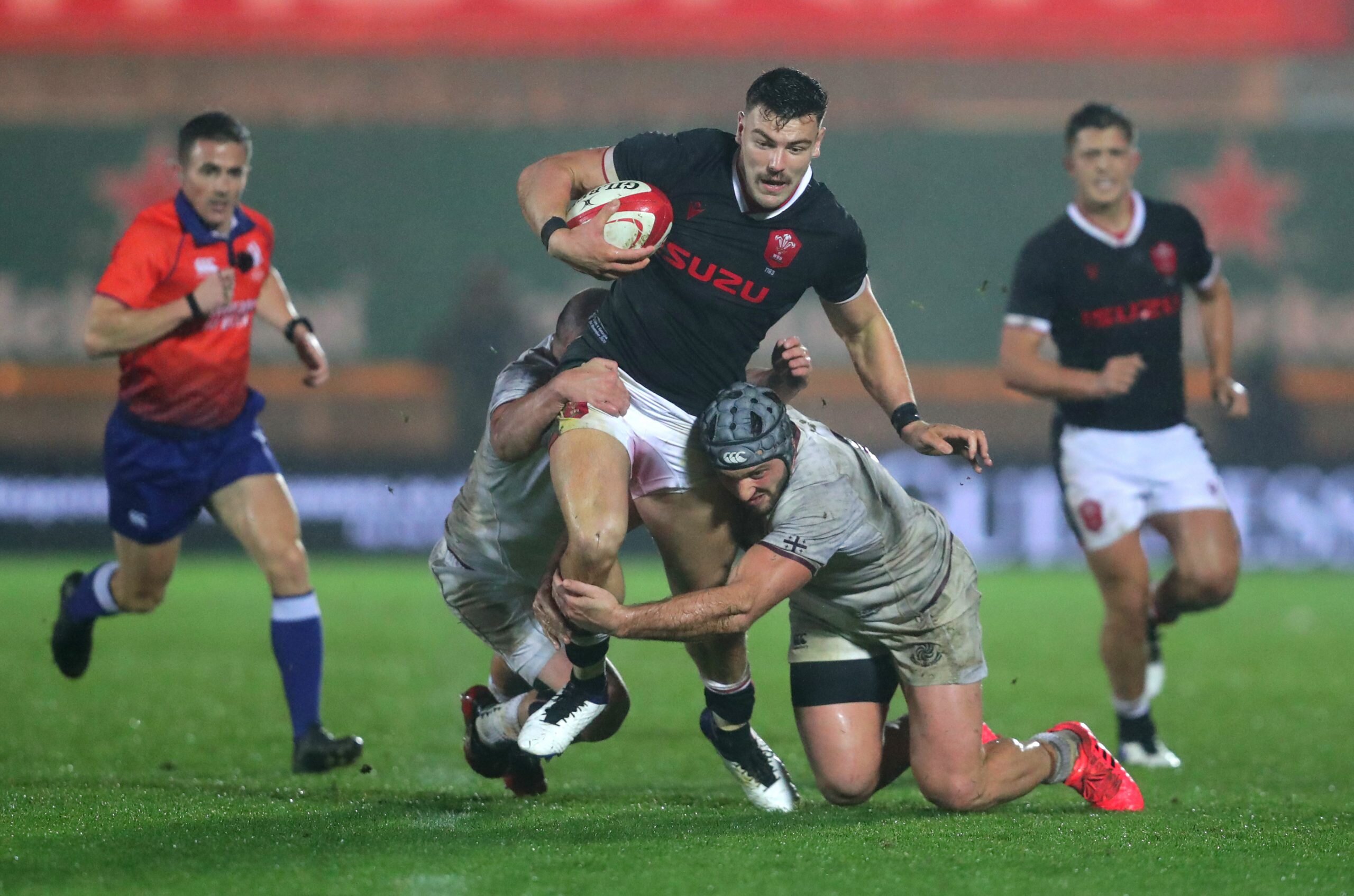 12. JOHNNY WILLIAMS – 6
One of only a handful of players who can claim to have lined out for two different countries at senior level, the Scarlets centre made an impact from the off with some solid defensive tackles, but we didn’t get to see what he’s capable of with ball-in-hand, other than some fairly direct charges upfield that yielded 19 odd post-contact metres.

13. NICK TOMPKINS – 5.5
The Georgians were never going to pose a huge defensive threat with their backline, so it was an opportunity for Tompkins to lay down a marker at 13. Looked busy for spells and but was ultimately part of a Welsh backline that failed to create much as a unit – albeit in horrid conditions.

14. JOHNNY MCNICHOLL – 5
Back in a Welsh jersey after some time away due to injury, McNicholl was another man that will have wanted to put in a big performance against limited opposition. Made a few telling contributions in attack but hobbled off soon after halftime with a possible shoulder injury.

15. LIAM WILLIAMS – 5.5
Came in from the backfield looking for work, but didn’t have much to show for his industry. Unfailing under the high ball as you’d expect from the unflappable Lion.

18. LEON BROWN – 7
Won a scrum penalty within minutes of coming on. As Wales inevitably look to phase out Tomas Francis, they should make getting Brown more playing time a priority.

21. RHYS WEBB – 7
Nearly created a try with an acrobatic offload, which was millimetres away from brilliance. Got on the end of a nice move from a clever support line.

23. JONAH HOLMES – 6
Came on early in the second half for McNicholl. A couple of decent attacking contributions but he fell victim to the conditions like the rest of the Welsh backline brigade.

Too many 4s and 5s here with Ireland's attack toothless#ENGvIRE #AutumnNationsCuphttps://t.co/PaZldZEkAo