END_OF_DOCUMENT_TOKEN_TO_BE_REPLACED

'He should never captain the All Blacks again': NZ leadership guilty in numerous late collapses
J
Jo 4 hours ago

"Telfer has three decades of sports broadcasting experience" but zero experience playing. His experience of 'pressure' is from an arm-chair. To blame Whitelock, Foster or whoever from the playing/coaching group and not laud how good England were in maximising the numerical advantage is proof these guys should just remain hacks.

END_OF_DOCUMENT_TOKEN_TO_BE_REPLACED
Greg Garner: 'I wouldn't recommend any referee to go there'
J
John 8 hours ago

Agree with Ross about the transparency of the ref reviews. The rugby player has an immediate result to his mistakes - penalty, sin bin, couple of weeks ban, I think all that most of us want is to see that there are consequences for refs when they make a mess. For far too long this was something done behind looked door's giving the impression that refs were royal game not subject to the consequences of their actions.

It was a bizarre and unsettling end, a late volley that leeched some joy from an otherwise powerful Scottish victory.
Scotland had been motoring along very nicely, utterly dominant, their intensity and elan stupefying Italy. Their pack rumbled with menace and their big strike runners slalomed and galloped through the blue jerseys.

They had scored five tries and should have scored more, squandering a glut of field position and tantalising overlaps in a first half they bossed. They led 33-3 with nine minutes to play and the game had long been theirs.

But those final throes will gnaw at them. Three Italian tries in seven chaotic minutes. Yes, Scotland had lost Simon Berghan to the sin bin and their whip-cracking general, Greig Laidlaw, had retired for the afternoon. Yes, down to 14 men they persisted with the hitherto bountiful tactic of firing bodies into the breakdown. And yes, even allowing for the most enormous collapse in rugby history, they were never in any danger of losing.

Yet the way Scotland relinquished their grip on the game in that period was alarming. The passiveness where before there had been focus and aggression. Minds, it seemed, drifting to full-time and the colossal undertaking that awaits next week, when a wounded and smarting Ireland will roll into Edinburgh.

Matt Taylor, Scotland’s defence specialist, is an animated viewer at the best of times – it would have been safer for all concerned had he been confined to a padded cell for those last 10 minutes.

Scotland are gunning for the top but top teams don’t sleepwalk to the finish line like that. You can’t imagine the All Blacks, South Africa, or several of the Six Nations big beasts, chucking away scores as meekly in that position.
The finale was a shame, particularly since so much of the preceding 70 minutes was excellent. Gregor Townsend can take a lot from what he saw out there.

Blair Kinghorn, his 22-year-old full-back deployed on the wing, gets the spotlight and the plaudits after cantering away for three excellent tries – the first Scottish hat-trick since the Five Nations became six. More encouraging is that all three were scored after a high-profile error – the devastating Kinghorn scythed through Italy’s midfield in the opening minutes but could not give Stuart Hogg a scoring pass when his colleague had a clear run to the line.
Kinghorn was a threat every time the ball reached his gangling frame. His third score in particular the result of a fantastic piece of finishing. That’s six tries in eight caps. What a prospect.

With Sean Maitland and Byron McGuigan to return from injury, Lee Jones of Glasgow and Edinburgh’s pocket tiger Darcy Graham vying for a spot, Scotland’s back-three stocks are in rude health. 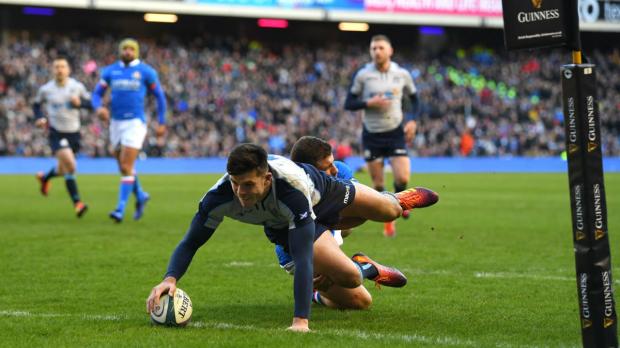 Debutant centre Sam Johnson was phenomenal, displaying all the poise, intelligence and dynamism that have made Townsend so keen to get him involved. Johnson beat six defenders and his performance was laced with classy touches. Most of his competition for the 12 jersey is injured or, in the case of Alex Dunbar, badly short of form – there is a juicy opportunity for Johnson to make the position his own with the World Cup not too far down the tracks.

Hogg, scorer of Scotland’s third, delivered a typically electric showing at full-back, stressing the Italians whenever he seared into the line or ran from deep. Tommy Seymour made some clever defensive reads and one telling break.

And Finn Russell swaggered supreme at 10, his decision-making razor sharp. His split-second vision and sumptuous execution put Kinghorn in for his first with a peach of a crossfield kick. His delicate grubber was pounced on by Hogg and his caressed, delayed passes, first to Allan Dell then to Josh Strauss, were pivotal in the final two tries. It was a masterful outing, rated by Townsend as one of his best in a Scotland jersey.

In a second-row missing Jonny Gray, Grant Gilchrist put in 19 tackles and made 10 carries. In a back-row missing captain John Barclay and Hamish Watson, Jamie Ritchie was a belligerent titan on the open-side flank. Ryan Wilson put in his usual – and often under-appreciated – ton of graft with 16 carries. Strauss, introduced early on for the unfortunate Sam Skinner, charged as Scotland fans crave. The pack won all four of their scrums and all but one of their 13 line-outs.

All in all, an assured first hit, and only the third time in Six Nations history that Scotland have opened their championship with a win. They were wasteful in the first half and malleable at the end, but until that bonkers finish, never looked stressed. Conor O’Shea will ask why it took his side 70 minutes and five tries to start flexing their muscles.

Next week will be different for Scotland – so very different. Who foresaw the rampant Irish being tactically flummoxed and physically monstered on their own patch? And against England? How galling. Ireland under Joe Schmidt have seldom looked to flustered and bereft of ideas and it will probably be a long time until they suffer like that again. Pity the team, many are saying, who face them and their bubbling wrath next.

That’s what’s coming at Scotland now – a humiliated and vengeful Ireland bursting with winners and relentless vigour. Back-to-back defeats would be catastrophic for the champions.

If Scotland are to conquer them, they’ll need to be a whole lot sharper and a whole lot more concentrated for 80 minutes. The attrition and intensity will be ramped up tenfold on what they faced yesterday, but they know that.
They also know that nobody has won a Six Nations Test at Murrayfield since Eddie Jones’ Grand Slam winners in early 2016. France, England, Wales, Italy and, yes, Ireland, have all fallen there since. There’s a monumental challenge ahead, for sure, but meet it, go two from two, and what a riveting championship it could be.