END_OF_DOCUMENT_TOKEN_TO_BE_REPLACED

Phil Davies denies it's jobs for the 'boyos' with Welsh hires

Namibia coach Phil Davies believes his decision to enlist two coaches from Welsh club rugby to help prepare the Rugby World Cup minnows to face the might of pool opponents New Zealand and South Africa is based on logic rather than jobs for the “boyos”.

Former Wales No8 Davies, in his fifth year as the Namibia head coach, has a pool of just 900 players to choose from and all but a handful are full-time professionals – playing outside the country. The rest of the Namibian squad fit in training around their working lives which means their coaches have to understand the different demands and pressures on the players who pull on the blue jersey as the lowest-ranked nation at the World Cup in Japan.

That is why Davies has appointed two coaches from the semi-professional Welsh Premiership – Merthyr’s Dale McIntosh and Mark Jones, who has just quit as RGC 1404 head coach – to look after defence and attack respectively in a Namibian coaching team that faces the daunting task of preparing the players to take on New Zealand, South Africa, Italy and Canada. In the lead up to those matches, Namibia will have two home warm-up games with the Southern Kings Pro14 outfit.

Given Namibia’s record in previous Rugby World Cups is 0-19, Davies is not having to deal with the pressure of massive expectation but he is convinced that the recent win over Uruguay proves his players are developing an ability to deliver on the big stage and the target is to register that first-ever Cup win in Japan. It means the final Pool B fixture against Canada – only two places above 23rd ranked Namibia – on October 13 could be the biggest day in the African nation’s rugby history.

Ironically, Canada are coached by Kingsley Jones – another Welshman – adding yet more interest to the fixture back in the Principality. So, why did Davies choose former Welsh flanker McIntosh, who acted as hotel security for various teams in Wales at the 2015 World Cup, and 47-cap Jones, whose RGC team is based in Colwyn Bay in North Wales?

He told RugbyPass: “Dale will do the defence and Mark will do the attack and Jaco Engels ( 15 caps for Namibia) will do the set piece work while my job is to look after the selection and the game plan. That is the hub of the management for the World Cup. Dale has had a lot of success with Merthyr and the key thing is that he has coached Cardiff Blues academy, Wales U18 and worked with me as defence coach at the Blues. The reason I wanted Dale is that he has coached across the spectrum – young players, semi-pro and also fully pro guys. That is going to be very important because that is how the Namibian squad is made up. 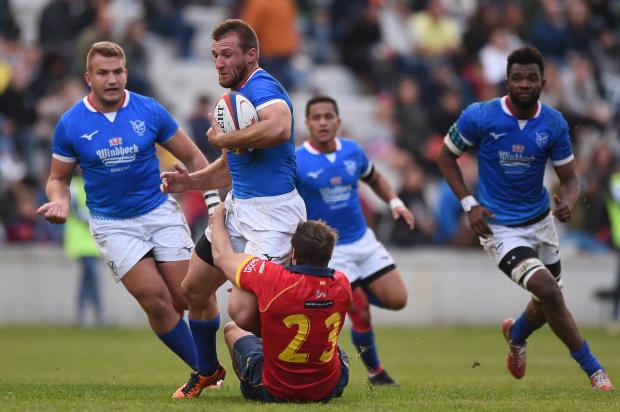 Johann Tromp of Namibia is tackled by Richard Stewart of Spain during the international rugby match between Spain and Namibia at Estadio Central on November 17, 2018 in Madrid, Spain. (Photo by Denis Doyle/Getty Images)

“We have young players who have been in Super rugby academies, semi-professionals who work and 60 per cent of the squad will be from that demographic. It’s not a case of bringing Dale in because I knew him, it’s because he is a great cultural architect and will fit really well with the way we work.

“In Mark and Dale we have two really good coaches who the players will really enjoy working with. I know what Mark can bring and like Dale he has coached across the spectrum with Wales, Scarlets and RGC and he understands the mixture of young guys and semi-pros as well. We also have a strength and conditioning group headed by Wayne Proctor (ex-Wales) with really good Namibian guys working closely with him.

“During the course of the time I have been in Namibia we have tried to grow a coaching team and that was part of the strategic plan after the 2015 Cup where we had a Namibian defence and attack coaches and team manager but people move on. We now have a high-performance centre and we try to bring the best available people in and Mark and Dale will transfer skills and knowledge to help build for the future. I have spent five years trying to create a platform for not only this World Cup but also the next one in France.

“There are experienced coaches with the dominant teams in the domestic league which only has seven teams and that needs to grow to ten. I would like to see Namibia create a ten-year plan and grown a national academy from the high-performance centre. There is a great foundation in place.”

Davies has tried to increase the number of fully professional players in his squad but has been turned down by players such as Windhoek born Anton Bresler, the Worcester Warriors lock. He explained: “We spoke to Worcester’s Anton Bresler, Divan Rossouw at the Bulls and Michal Haznar at the Griquas and for one reason or another they are not available and that’s fine. You have to respect that.

“With less than 900 players who play domestic rugby in Namibia, to make the World Cup finals is an amazing testimony to this group of players. We have grown from an average age of 31 at the last World Cup to just over 24 this time but we have more test caps. While the scoreboard hasn’t been kind to us when we have taken part in SuperSport game in South Africa we have learnt a lot. We need to use that knowledge to be a competitive as possible in all the pool games.”