'Montpellier have all the money in the world, they can get close to success, but it was guys collecting paycheques'

Siya Kolisi released from Stormers Next
Back
Super Rugby Aotearoa

'Montpellier have all the money in the world, they can get close to success, but it was guys collecting paycheques'

In an Auckland hotel bed, Nic White stirred and reached for his mobile phone.

The screen illuminated, displaying a slew of missed video calls from Jack Nowell, the Exeter winger, heralding the culmination of a marvellous sporting story.

Back in England, the Chiefs had scaled the very summit of European rugby, conquered Racing 92 and completed a colossal Premiership and Champions Cup double.

The club White left prematurely in the throes of the pandemic had at last hit the apex on their glorious ascent. The scrum-half rang Nowell back and the phone was brandished around the champagne-sodden mayhem of the dressing room. Eleven-thousand miles away, tears trickled down his cheeks.

“I didn’t watch the Champions Cup final because it was the night before we played the All Blacks in Auckland,” White tells RugbyPass. “I remember waking up to all these missed calls from Nowellsy. They were still in the sheds, he gave me to Rob [Baxter, the Exeter director of rugby] and the boys, Jack Yeandle and Henry Slade, I spoke to all of them.

“It was just relief – they finally did it, they finally put a star on the jersey. Even on the other side of the world, I was a bit emotional at 8am waking up on game day.”

The feelings whipped up inside White that day were complex. He should have been there; he should have been part of it, at the eye of the euphoria. He was always heading back to Australia at the end of the season, his yearning to play Test rugby again white-hot after four years in Europe with Montpellier and then the Chiefs.

But coronavirus took a sledgehammer to the 2019-20 campaign. White never had the chance to help finish what Exeter started, to drape medals around his neck and revel in the rich fruits of their toil.

“In lockdown I did go through a bit of a ride – this is bull***t, this is unfair, you pity yourself. There was more than a feeling there; we knew we were going all the way that year. We knew it after the final the year before where we lost so narrowly to Saracens, that was the moment.

“I remember after that final on the bus back from Twickenham we spoke about it, we’ve gone toe-to-toe with the best and we know we can go another gear. I remember that I was a part of it. 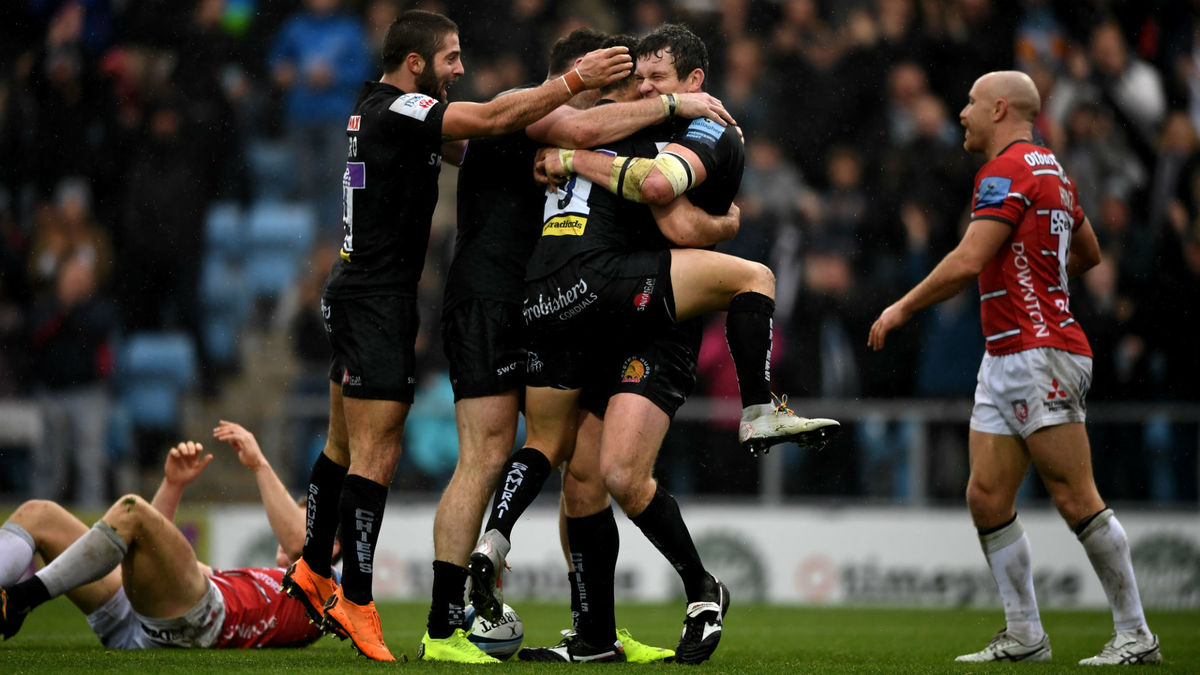 Nic White celebrates a try with his Chiefs teammates /Getty

“The club has not forgotten what a rugby club needs to be, almost exactly what Montpellier don’t have. Montpellier have all the money in the world, they can get close to success, but it was guys collecting paycheques, doing what they had to do and then leaving.

“That was the opposite of what you had at Exeter. It is a professional team with that amateur club feel about it. One of the little things I loved was going upstairs and having a couple of beers with the members, I thought that was so good. I’m just a bloke, and at first I was like, are you sure it’s ok to have a beer after a game? But it was encouraged to go up there and have a beer with the members.

“It just flowed through the whole club like that. I saw things very differently, everything around my rugby, the way I wanted to be and act. I can’t thank that place enough; I don’t have the words. I was a bit of a boy when I rocked up there and I certainly left a man.”

It is worth teasing a few memories from White about his time in Montpellier. He was taken to France by Jake White, under whom he had played at the Brumbies, in 2015. The coach followed his established blueprint – signing older, established South Africans he knows and trusts to the hilt – but it created a huge dichotomy.

The French players felt their team was being hijacked, and that the newcomers had no interest in learning about the culture and the country. Team meetings were conducted in English and sometimes in Afrikaans. White felt trapped in the middle of two factions.

He exhales when you ask him for the most madcap tales of his French odyssey, running a hand through the tousled mesh of curls atop his scalp.

“Mate, I could go on all night. I’ve got plenty of stories. I’m just trying to think of which ones I can tell ya.”

Eventually, he plucks a couple of tamer yarns from the archives.

“In the first half of my first season there, we were winning in Clermont at half-time. The tunnel there is tiny, and I copped a bit of a shoulder from the Clermont scrum coach, who was an ex-Montpellier player. 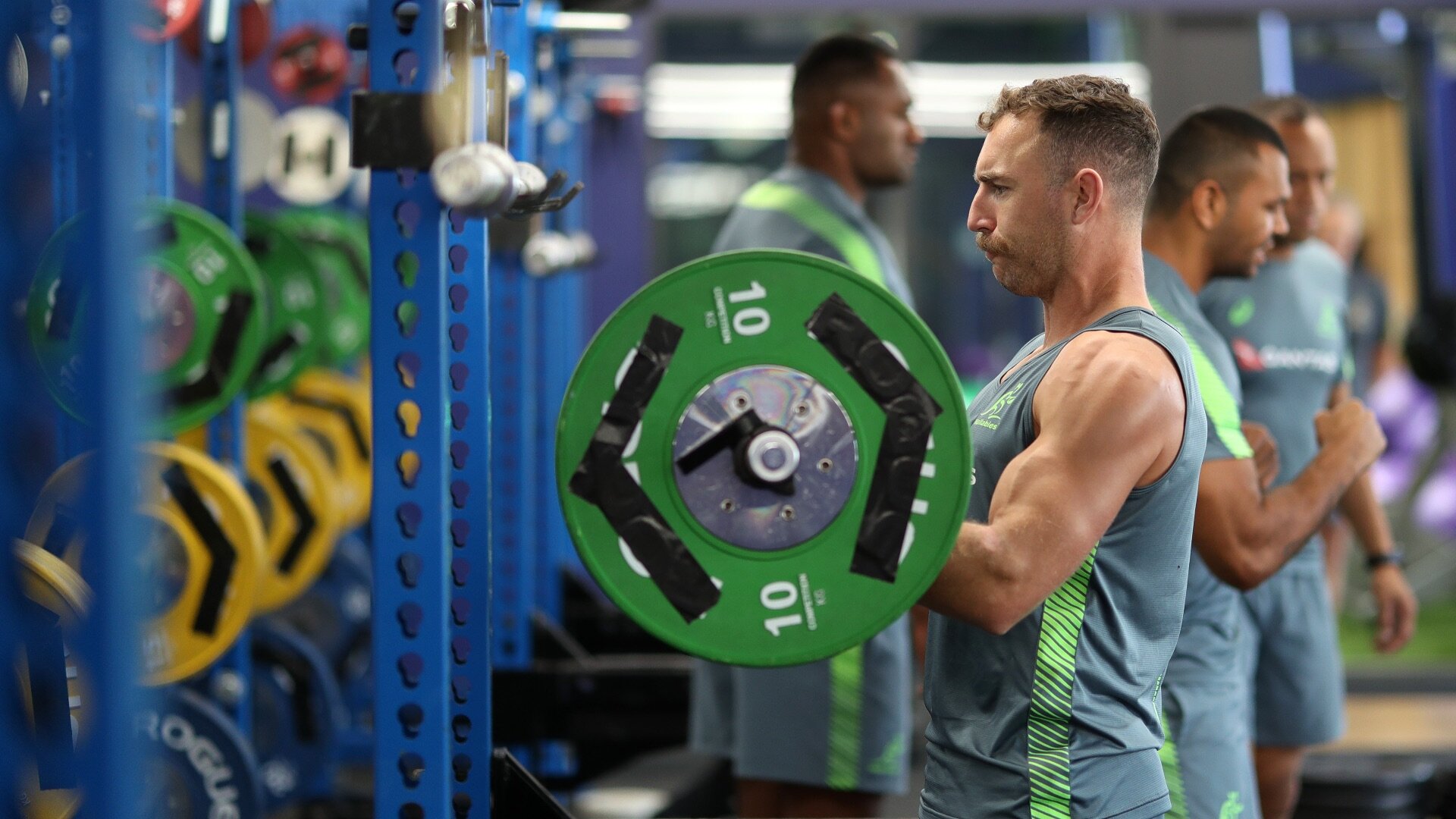 “In my poor French, I was like, ‘désolée’, and I got an absolute mouthful. This big bloke just grabs me by the scruff of the neck, boom, up against the wall. I thought, oh my god, who is this bloke, what have I done? I had absolutely no idea what he was talking about.

“Luckily all the boys were around me and it got split up pretty quickly, nothing really thrown. As we went out for the second half, I tried to sneak out to avoid this bloody big scrum coach, the game got stopped, the referee came over and red-carded him.

“The emotions fly high, but we beat Clermont, and in the function after we had a chat and a laugh.”

He speaks at length about Mohed Altrad, the Syria-born scaffolding mogul who owns Montpellier and wields immense power in the French game. Altrad rose from the depths of poverty to accumulate an estimated net worth of US$2.7bn.

'I’ve always loved rugby, pig on it, eating out on it, watching it, playing it. I’m still running around with these 18-year-olds and doing stupid stuff' @John_Afoa 's love of rugby hasn't ebbed, even if some memories still irk, writes @JLyall93 ???https://t.co/3q8Oxnzmve

In White’s second and final year, with the squad labouring in mid-table, Altrad promised them a spree of outrageous win bonuses should they make the play-offs. Montpellier duly embarked on a long winning streak, but the offer evaporated when they lost at home to eventual champions Racing 92 in the quarter-finals.

“Mohed is a funny one. He scares the absolute s**t out of me. He’s a very powerful man,” White says. “I tried to leave after my first year of my contract to go to Exeter and he called me up. They have a cut-off date at midnight when they have to have their squads in for the new season. A few guys were sweating on contracts; I got a phone call at 10pm, he was like, ‘I can’t let you go’.

“That second year became quite tense. He kind of held that over me for the next year, but I felt like there was always a bit of respect, and he let me go because they got Ruan Pienaar in the end. 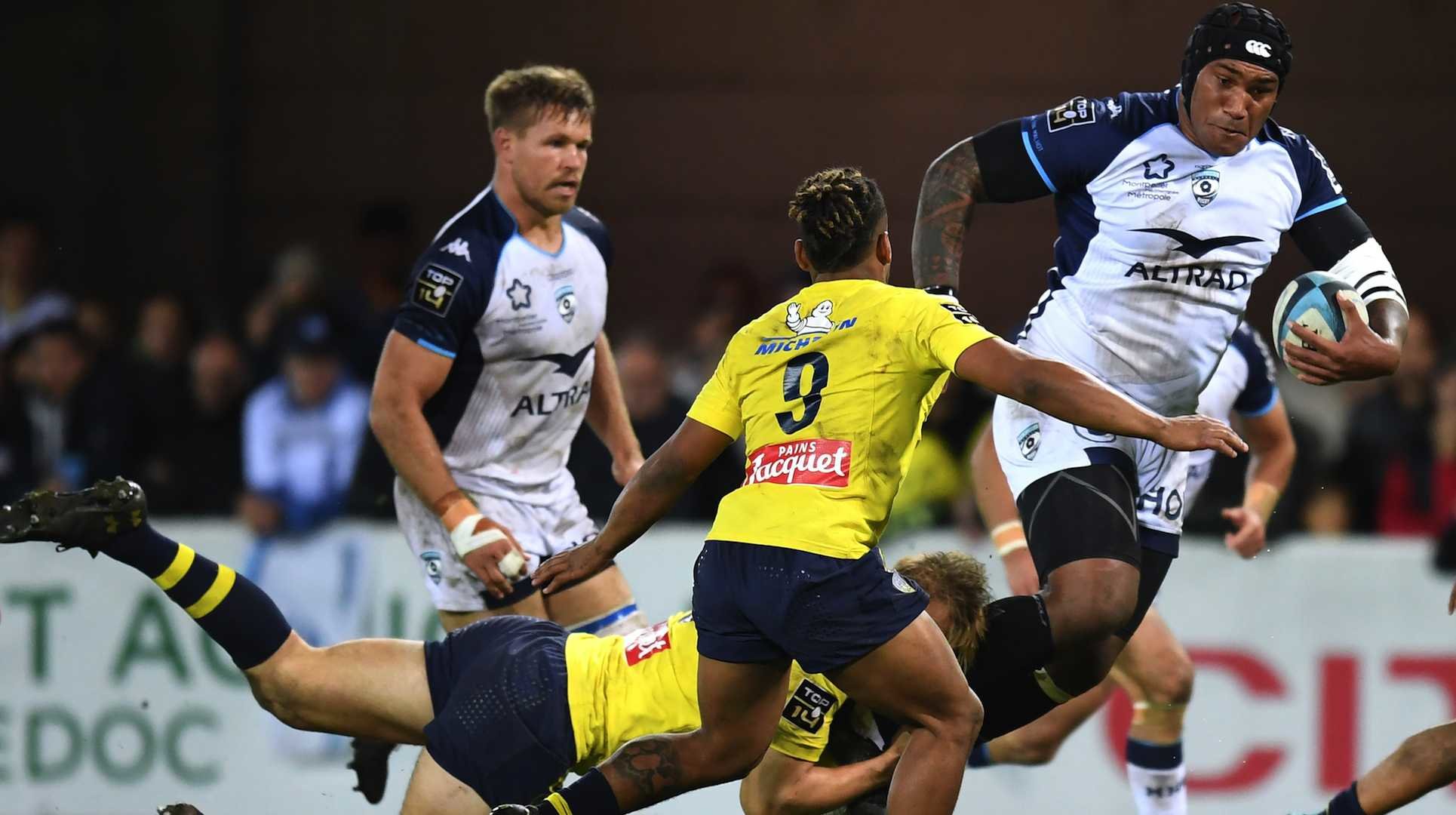 Nadolo taken down whilst playng Clermont

“For mid-day kick-offs, we’d stay overnight at this hotel and golf course. I was rooming with Nemani Nadolo, who had played his first couple of games and I don’t think he’d scored a try yet.

“He gets a call late at night, and he gets off and he’s clearly a little bit taken aback. He said, ‘Mate, that was Moed, he said he needs to see me score some tries otherwise it’s, boom, catch ya later’. Obviously, it was a bit of scare tactic but Nemz scored three tries the next day. He had a pretty bloody good career for the next three or four years down there.”

Back home in Canberra, White is happy. At 30, he is one of the seasoned campaigners in a youthful Brumbies set-up. The franchise romped to the inaugural Super Rugby AU title in 2020, and are heavily fancied to win the competition again this year. He played for the Wallabies under new coach Dave Rennie, and is invigorated by what he sees in the international sphere. 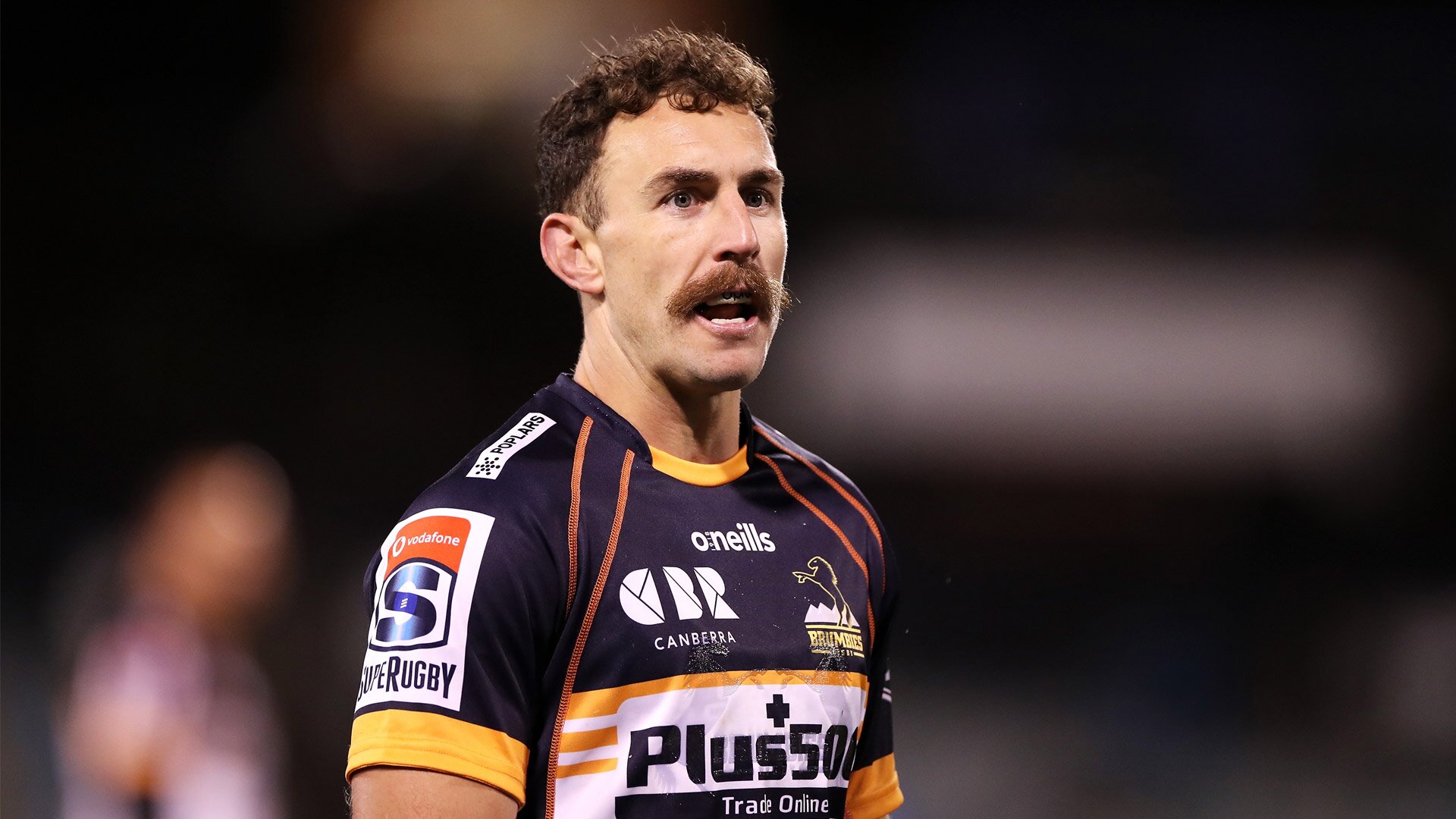 Nic White at the Brumbies (Photo by Mark Kolbe/Getty Images)

“Harry Wilson is 20, Jordan Petaia could still play U20s. The Wallaby team is made up of Super Rugby teams that are so young. It’s the perfect time for a guy like Dave Rennie to come in with the coaches he’s got, a world-class coaching team all the way through to high-performance.

“They’ve got their hands on some kids that have come through age-groups and had the better of the New Zealand sides. They get to nurture them. Anyone who has had Dave Rennie, you won’t find a bad word said about the bloke. He’ll get the culture right, he’s got a great rugby IQ. Mate, it’s unreal.”

Unreal is a sound description of White’s experiences in the game, from the bonkerdom of Montpellier to the storybook stuff in Devon and then the brutality of Covid-19. It was at Sandy Park where he came of age, and his homecoming is a fabulous boon for Australian rugby.