Ireland’s Guinness Six Nations title aspirations were prematurely ended as France underlined their status as tournament favourites by grinding out a 15-13 win in Dublin.

The Irish suffered successive losses at the start of a Six Nations campaign for the first time following scores from Charles Ollivon and Damian Penaud, plus five points from the boot of Matthieu Jalibert.

Les Bleus scrum-half Antoine Dupont – widely regarded as the best player in the world on current form – was largely well marshalled by the hosts, although he showed flashes of brilliance as the French revolution under Fabien Galthie continues apace.

France have won nine of 11 games since the appointment of Galthie, while this defeat piles more pressure on opposing head coach Farrell.

Ireland’s 2020 title aspirations were ended in Paris at the end of October and hopes of avoiding a repeat were dealt a severe blow during a challenging build-up in which a host of key players were ruled out.

Skipper Johnny Sexton, who this week became embroiled in a dispute with a French neurologist regarding his concussion history, and vice-captain James Ryan were unavailable due to head injuries, while scrum-half Conor Murray picked up a hamstring issue and flanker Peter O’Mahony was hit with a three-match ban following his costly red card in Cardiff.

It was the first time in a decade that Ireland had started a Six Nations match without fly-half Sexton or scrum-half Murray, resulting in an inexperienced half-back pairing of Billy Burns and Jamison Gibson-Park.

Fly-half Burns would have been desperate to prove himself a capable understudy to Sexton on the back of his much-discussed mistake which ended the game at the Principality Stadium.

Ireland's lack of attacking clarity cost them as clinical France march on. Here are our Irish player ratings: #IREvFRA https://t.co/fSG8OTG03v

His first penalty, after Jalibert had squandered one at the other end, was a wayward effort which showed signs of nerves but he made no mistake with a straightforward second attempt to put Ireland 3-0 ahead 20 minutes in.

With so much at stake so early in the competition, there had been a cagey start on a grey and wet afternoon in the Irish capital.

France were soon temporarily reduced to 14 men when Bernard Le Roux was sin-binned for a deliberate trip on Keith Earls. 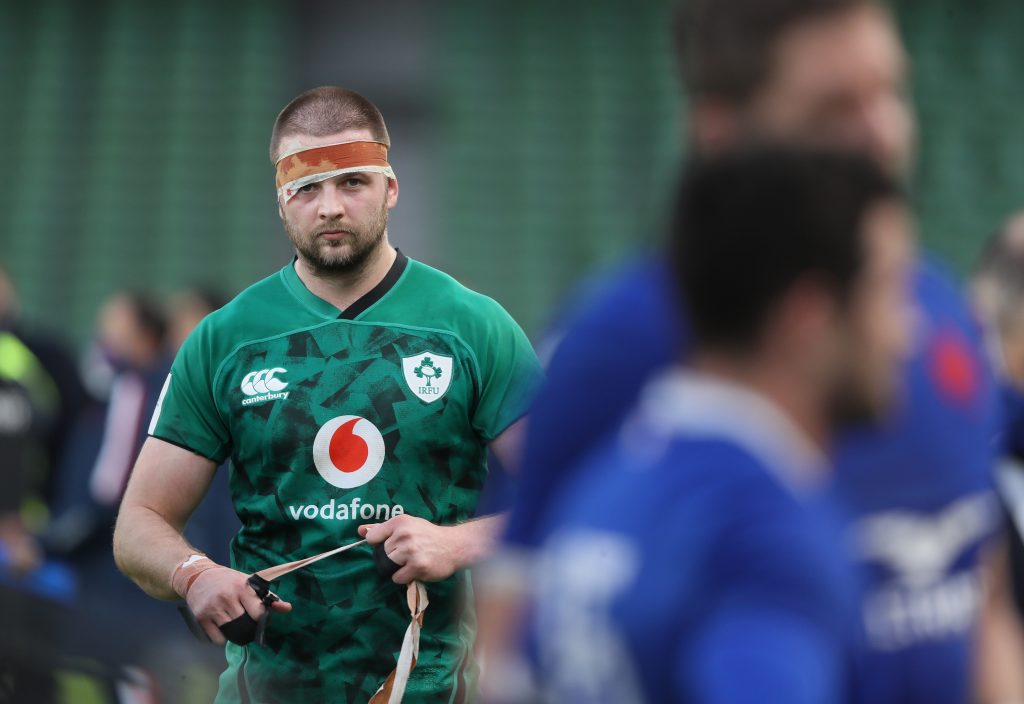 Ireland looked to have quickly seized on the indiscipline, only for replays to show James Lowe was pushed into touch by a combination of Brice Dulin and Gael Fickou just before grounding the ball in the left corner.

France have been playing an exciting brand of rugby under former captain Galthie and are rapidly moving into contention for a home World Cup in 2023.

Despite their narrow escape, numerical disadvantage and a lack of possession, the visitors burst into life to claim the opening try of the afternoon.

A series of superb offloads and free-flowing rugby was followed by quick ball from right to left, with a bounce pass catching out Gibson-Park and allowing Fickou to set up Ollivon to register his seventh score in 10 matches. 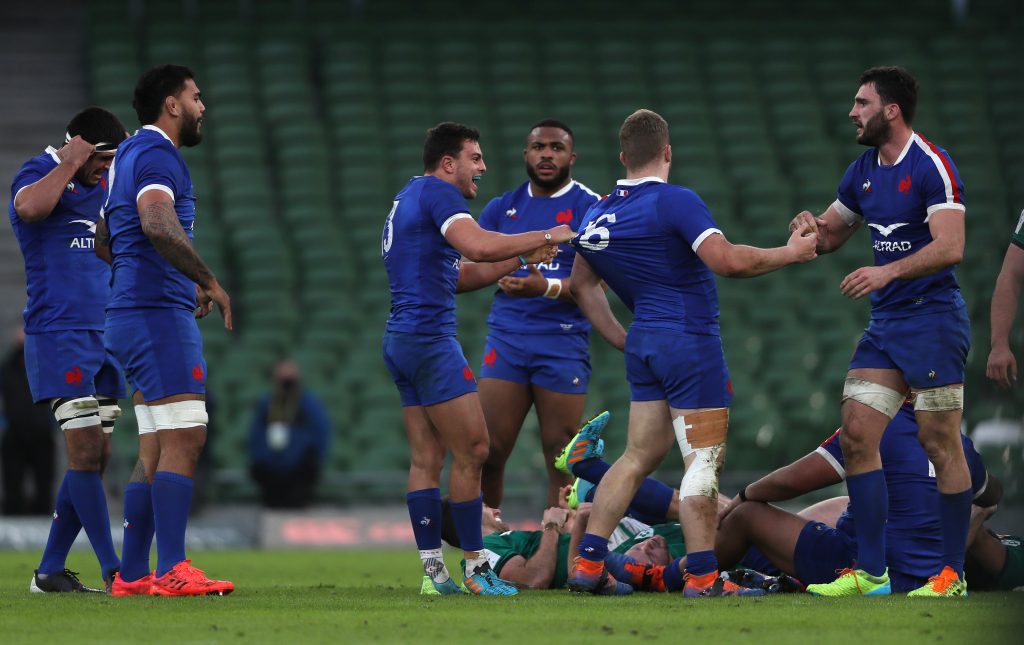 Jalibert made no mistake with the conversion and added a penalty to put Les Bleus into a 10-3 half-time lead.

France could easily have been further ahead early in the second period but, after rampaging hooker Julien Marchand was tackled close to the line, Dupont’s recovery pass inadvertently hit the head of Paul Willemse.

Following that escape, the hosts suffered a triple blow due to a succession of head injuries.

After Burns was forced for assessment to be replaced by Ross Byrne, stand-in skipper Iain Henderson – the 108th player to captain Ireland – and prop Cian Healy were left bloodied by a nasty clash of heads.

France were well on top at that stage and took control of the contest in the 55th minute courtesy of a try from wing Penaud.

Penaud, one of two men recalled following last weekend’s thumping 50-10 win in Rome, dived over in the right corner following assistance from Jalibert and Dulin.

However, Les Bleus had little time to enjoy the cushion. 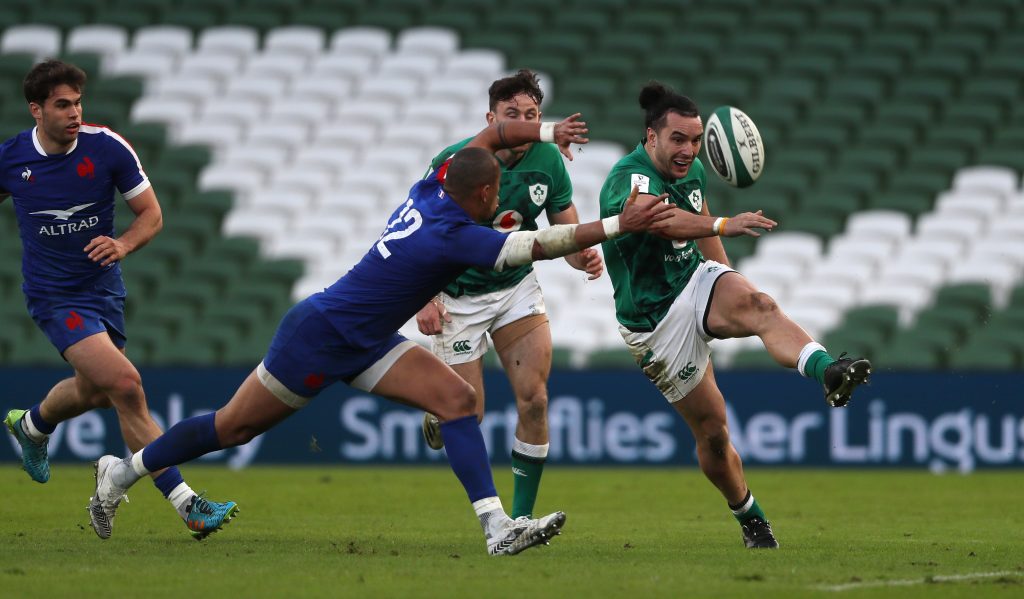 Ollivon conceded a penalty from the restart and Ireland’s replacement hooker Kelleher capitalised on a fortuitous bounce from the resulting line-out to touch down.

Substitute fly-half Byrne converted and then reduced the deficit to just two points at 15-13 with a penalty to set up a thrilling final 15 minutes.

Galthie was visibly frustrated when Jalibert hit the posts with a 72nd-minute penalty but Les Bleus were disciplined and doggedly dug in to win in Dublin for the first time since 2011 to keep their title charge on track.