'Fraser Brown can think what he wants - he's on holiday'

Tuilagi back at Leicester Saturday Next
Back
PRO 14

'Fraser Brown can think what he wants - he's on holiday'

“Breathe it in!” roared Richard Cockerill, the snarling Edinburgh head coach, as his players hacked and spluttered their way through a warm-up in the white-hot Stade Felix Mayol. “It’s atmosphere!”

The “atmosphere” in question, spewing and churning across the arena, was tear gas. Supporters hauled jackets and scarves over their faces to shield themselves from the stinging pain. Up on the commentary gantry, Jim Hamilton and Scott Hastings posted a video showing the mayhem erupting all around.

Cockerill’s approach? Inhale it. Embrace it. Own it. When the noxious fumes cleared, Edinburgh delivered a performance for the ages, castling the French behemoths on their own patch.

RugbyPass brings you Game Day, the behind the scenes documentary on the 2018 Guinness PRO14 final featuring Leinster and Scarlets in Dublin

Bill Mata’s offload, gloriously taken by James Johnstone for the latter’s try, made you wonder whether the Fijian had some kind of joint condition that allowed his arms to move in a different plane to the rest of us. Edinburgh fronted up and conquered the Mayol, tear gas and all.

The coach’s general disdain for weakness is reflected in his team. Tear gas wouldn’t have stopped the Leicester Tigers and the ABC club in Cockerill’s day. In fact, you fancy he would have taken the field with a canister stuffed into his sock if he felt he could get away with detonating it under the nostrils of an opposition hooker.

? You can't be there, so let us bring the #GuinnessPRO14 Semi-Final to you!

The only smoke bombs this week as Edinburgh prepare for their maiden Guinness PRO14 semi-final against Ulster at Murrayfield have been the verbal ones tossed by Cockerill in the media. The belligerent Englishman is always good value, entertaining but calculating in the juicy quotes he offers and the narrative he spins.

First, there was a searing put-down for Fraser Brown, the Glasgow captain. Brown had questioned the legality of the Edinburgh scrummaging in the wake of their win over a side heavily rotated by Cockerill. “Fraser Brown can think what he wants. He’s on holiday,” said the coach.

What about the notion that having topped their conference and won eleven of their 15 games, Edinburgh are favourites to reach the final? “I’m not sure we can be favourites, surely,” said Cockerill. “Ulster have won the competition before, they are in the Champions Cup quarter-finals against Toulouse and they are the club with all the history of being successful, so surely that makes them favourites.

As for Edinburgh’s status among the four semi-finalists: “We are the least favoured team, but we back ourselves to see how far we can go in this competition. With the money that’s in the other teams and their budgets, we are doing pretty well for ourselves and are probably batting above our average.”

Ah, poor little Edinburgh with their tiny fanbase rattling around inside cavernous Murrayfield, meagre war chest, bleak track record in major tournaments and callow group of players. Cockerill, as they say, is at it with this stuff – Edinburgh are favourites among all of the bookmakers and the bookmakers have earmarked them so for a reason. The semi-final is a game they should win.

This is unfamiliar territory, though. Edinburgh have never been here before. Cockerill got them to the PRO14 knockout phase for the first time in his debut season, but nobody expected them to go to Thomond Park and topple Munster, albeit they were pretty close to doing just that.

They were sunk again by the same opposition in the Champions Cup last eight the following year, another hard-luck story. How will they now handle being the fancied team? Is home advantage much of an advantage at all when none of your supporters can get in to make the place a cauldron?

"Compare Cockerill’s win percentage to his 4 permanent predecessors and he handsomely outstrips them all… by any objective measure, Edinburgh are a team transformed"

Ulster have some mighty customers of their own and in Dan McFarland, a fabulous technical coach who made a big impression on Scottish rugby. As forwards coach, first at Glasgow then the national team, McFarland upgraded both packs, turning scrums and mauls into serious weapons. Gregor Townsend thought very highly of him and was loath to see him go when the opportunity to take a top job arose.

McFarland joined Ulster at a time when the province was beleaguered and ravaged by scandal after the Paddy Jackson and Stuart Olding affair. Jono Gibbes had taken over as head coach and left soon after, citing family reasons. Ulster finished fourth in their PRO14 conference and missed out on the Champions Cup quarter-finals.

McFarland has done a fine job in revitalising the storied old side, taking them back to the PRO14 semi-finals in his first season at the helm, even if they copped a real hiding from a rampant Glasgow. He has got them to another semi-final this term and booked a quarter-final date with Toulouse in a few weeks after a stirring Champions Cup campaign where Bath (twice), Harlequins (twice) and Clermont were put away.

His three big injury doubts – Jordi Murphy, Jacob Stockdale and Stuart McCloskey – have been passed fit and start at Murrayfield. Stockdale, at his best, is one of Europe’s deadliest finishers and so much of what Ulster do is channelled through the bullocking McCloskey, a giant centre with footballing talent. 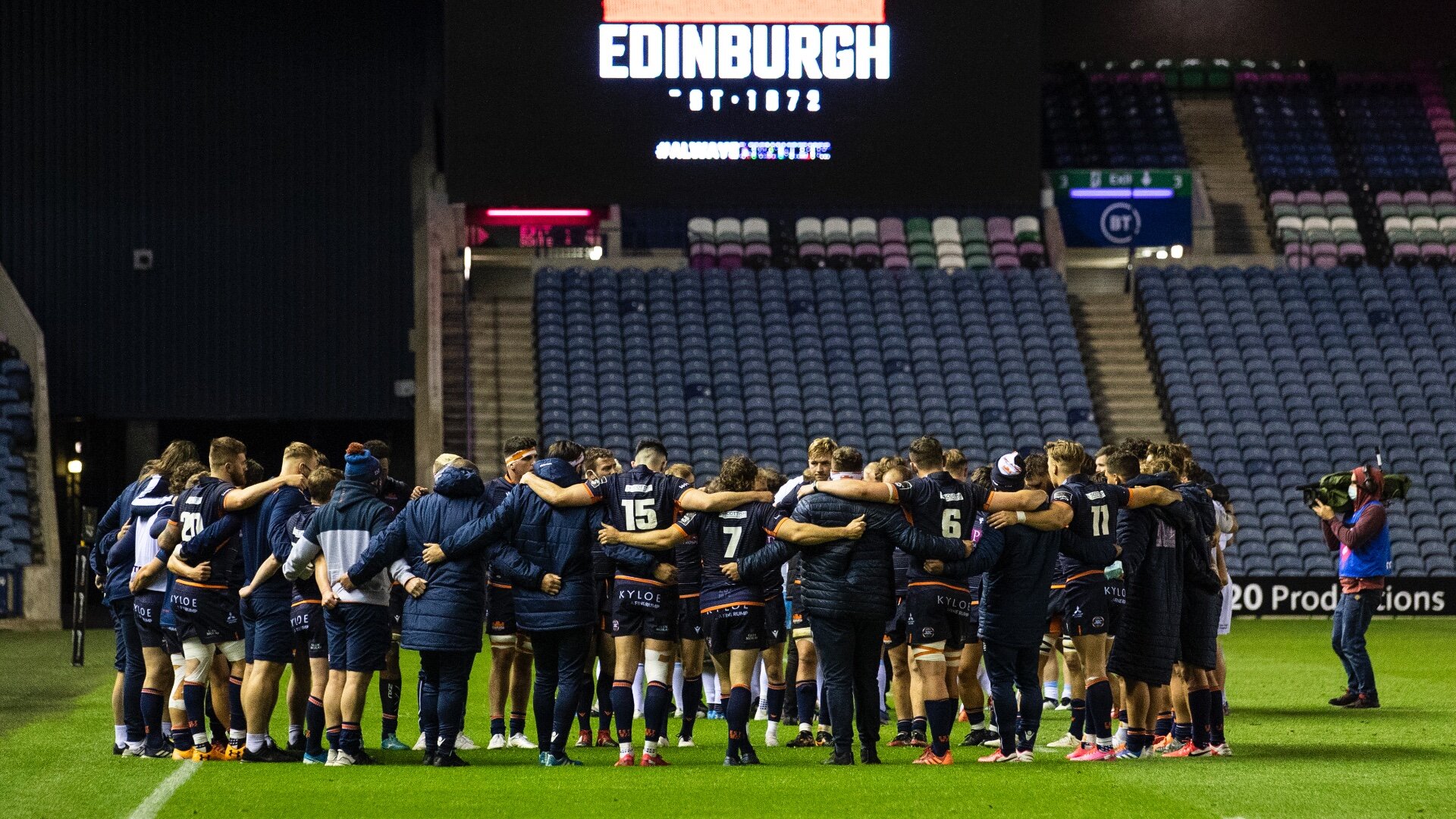 John Cooney is another totemic playmaker and game-breaker. Marcell Coetzee is a huge asset in the back row and his head-to-head with Mata will be colossal. The bench is laden with experience and Test quality in Jack McGrath, Marty Moore and Ian Madigan.

Ulster also have rare insights into how Edinburgh operate. Not only have they got the nous of McFarland, but they have the great Edinburgh stalwart and former assistant coach Roddy Grant, the former managing director Jonny Petrie, and even the club’s former head of communications on staff.

Cockerill has a near-fully fit squad at his disposal. Jamie Ritchie and Ben Toolis have not played a minute of rugby since the season’s resumption, but they are needed and available and they will have important roles to play. Edinburgh’s ability to get their go-to men – Mata, Duhan van der Merwe, Blair Kinghorn and Darcy Graham – on the ball as much as possible in areas where they can do damage will be vital.

The Scarlets, in Dublin and in Glasgow, are the only team to have won a PRO14 semi-final away from home. Ulster have lost their past six knockout games. Edinburgh have lost six matches at Murrayfield in three years, but two of those were against Ulster. Edinburgh sealed top spot with a comfortable win over Glasgow a fortnight ago; Ulster lost to Connacht and then Leinster and have won only three of their past nine away fixtures.

Ignore all the grenades and smokescreens from Cockerill – the tea leaves and the form book point to an Edinburgh home win. There will be no tear gas and no sizzling atmosphere on Saturday, but a glorious opportunity for Edinburgh to step up and break new ground.

With just one win in 14 away to Leinster since ‘nilling’ them in September 2008, the pressure is all on Munster to finally deliver in Dublin