On Saturday afternoon, the rugby story was not Billy Vunipola’s controversial comments on social media or the stupidity of a fan running onto the pitch to confront him, it was the ruthlessness of Saracens’ performance.

A few successful kicks at goal and an opportunistic try off the back of a mishandled Saracens scrum gave an air of respectability on the scoreboard to Munster’s efforts at the Ricoh Arena, but the reality was that it was a one-sided match that Saracens never looked like losing. It finished 32-16, but it could quite easily have been a 20+ point deficit had Darren Sweetnam not struck off of the Saracens’ scrum error midway through the second half.

Credit where it’s due, though, and Munster never gave up on the game, nor did they present a meek challenger who Saracens were able to brush passed with little effort, it’s just that Saracens were more efficient and clinical in almost every aspect of play.

For envious Gallagher Premiership clubs who watch on at Saracens’ European adventures, with the side from north London now preparing for their fourth Champions Cup final in six seasons, there is no closely-guarded secret to the club’s success. It was all on show in Coventry on Saturday afternoon.

Of the 15 men that started the game, both smothering and outplaying Munster from the outset, six of the players came from the club’s junior academy. Jamie George, Maro Itoje, Jackson Wray, Ben Spencer, Owen Farrell and Alex Goode all previously turned out for Saracens U18s, before being given professional contracts at the club.

That number jumps from six to seven when you include George Kruis, who was signed at 18, with the lock having been let go by Harlequins when the decision on who to contract was made.

It jumps again to 10, if you include Titi Lamositele, Mako Vunipola and Billy Vunipola, all of whom were identified early and brought to the club by the time they were 20 years of age. That means two thirds of the starting XV were developed, or spent considerable time developing at the club.

Lozowski was picked up from Wasps, where his opportunities were limited behind Danny Cipriani, Strettle was an experienced addition with, you could argue, some of his best rugby behind him, and both Barritt and Rhodes were not high profile additions when they arrived at the club, with the pair going on to enjoy the best rugby of their careers in the following years.

Of those five, only Williams really fits the bill of a big-name signing and his impact has been superb, with the versatile back three player living up fully to his reputation and the expectations that have surrounded him since he arrived.

It goes to show that you don’t need to sign superstar players from all over the world to be competitive with the very best. You need to produce your own players, show savvy talent identification early and then recruit wisely, rather than going for the ‘sexy’ signings. It’s something that Saracens seem to have mastered and they have put a coaching staff around those players that allows them to have success with the approach.

There’s no doubt that the likes of Barritt, Rhodes and Lozowski have improved as players since they have been at the club and although transfer fees are extremely rare in rugby, it’s the same policy of buying low and selling high that the likes of Ajax and Spurs have excelled with in football of late. Maintaining that doesn’t come cheaply, though, so maybe Barcelona are a more suitable comparison, as Saracens’ ability to retain players is unparalleled in English rugby. The key, though, is that they put themselves in a position to succeed through their academy, scouting and development coaching. 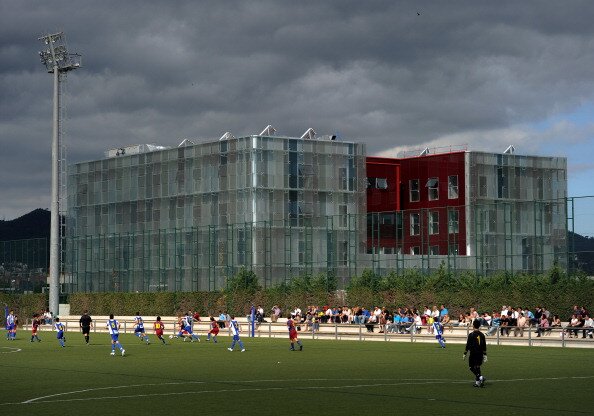 Is the pathway at Saracens the closest thing in English rugby to Barcelona’s famed La Masia academy? (Photo by Jasper Juinen/Getty Images)

From Alex Sanderson, Ian Peel, Kevin Sorrell, Joe Shaw, Dan Vickers and Phil Morrow in the senior set-up, to Mike Hynard, Adam Powell, Kelly Brown and James Tirrell on the academy pathway, there is a constant theme of not just preparing players for the game at the weekend, but also continuing to help them to improve, no matter their age or reputation. This, of course, is all coordinated under the impressive stewardship of director of rugby Mark McCall.

No one should expect this relentlessness and domination of Saracens to end anytime soon, either.

Elliot Daly is on his way to London and if he has the same impact as the club’s last big-name signing in Williams, he’s only going to add to their already considerable ability, whilst the addition of highly-touted prospect Rhys Carre from the Cardiff Blues has all the hallmarks of the move Saracens made for Mako Vunipola back when he was at Bristol. Daly makes Saracens even better outside of international windows and Carre reportedly turned down more money in Wales to be a part of the project going on in St Albans.

Nick Isiekwe and Ben Earl are right on the cusp of the first XV when everyone is available, Nick Tompkins and Max Malins have shown up well whenever they get an opportunity and Matt Gallagher and Rotimi Segun should see their playing time increase next season as Williams and Sean Maitland go to the Rugby World Cup. Other talents with a lot of promise, such as Joel Kpoku, Tadgh McElroy, Andy Christie, Elliot Obatoyinbo and Sean Reffell, wait in the wings, also.

Another good crop of youngsters is on the way in, too, with tighthead Harvey Beaton potentially a long-term solution for a relative problem position, England U18 back rower Oliver Stonham signing on and mobile hooker Theo Dan bringing some welcome x-factor.

For Saracens, the machine is running. Every year they have to maintain it and tweak it, but the foundation is in place for success. There’s no shortcut for the Leicester Tigers, Wasps or Baths of the Premiership to take and get to where Saracens are, but the blueprint for traversing that path is not hard to find, if you really want to look for it.

Getting your house in order, in terms of coaching, a productive pathway and good scouting doesn’t come cheaply, but as another European season approaches its climax, Saracens are once again the only club carrying the flag for English rugby at the highest level.

Irish star has RWC warning Next