END_OF_DOCUMENT_TOKEN_TO_BE_REPLACED

England's defence is the first ailment in need of treatment

When Eddie Jones sought out rugby league coach Anthony Seibold to oversee England’s defence after the departure of John Mitchell, he boldly brought in the man who oversaw the worst season in Brisbane Broncos’ history in 2020.

One of the NRL’s strongest clubs historically with six titles in their short history, the Broncos were already on a decline but under Seibold’s watch fell off a cliff in his second season, winning three games from 20, whilst shipping a points differential of -356 and secured the club’s first ever wooden spoon.

This was hardly the credentials of a fit for purpose rugby league coach, let alone as the defence coach of England in the other rugby code.

Coaches with rugby league backgrounds have made successful transitions into union, most recently David Kidwell who has transformed Argentina’s defence, but based on Seibold’s dubious record, the appointment was always going to be a gamble by Jones.

Seibold’s two seasons in charge of the Broncos came to a swift end with both sides agreeing to an early termination. In other words, it was better for the team if they paid him not to be there.

If Jones’ tenure comes to an end on Monday, it will be his failure to keep assistants that can be pointed to as a shortcoming of his rein in the final years after incredible success in his first World Cup cycle.

All areas of England’s game have trended downwards since Jones lost Scott Wisemantel as an attack coach, Steve Borthwick as a forwards coach and John Mitchell as a defence coach.

As Ian Foster of the All Blacks can attest too, assistants matter. The arrival of Joe Schmidt has sharpened so much of what they do with the ball, while bringing in fresh ideas to utilise the best of the skills the players have.

If Jones is sent packing, who is England’s next head coach matters far less than the make up of England’s entire coaching staff. The first order of business with Jones or without will be to improve the defence.

Without a strong foundation, they will not be a real contender in France next year despite having a favourable path into the semi-finals.

England’s defence isn’t porous, but is no longer dominant and struggled to consistently control the gain line this Autumn under Seibold’s watch.

Their best performance came against Japan but they failed to maintain the same standard against the Rugby Championship sides.

Particularly reseting the line off a set-piece, just one player lagging behind can derail the system.

The English pack has been caught out like this numerous times and leads to the opposition getting a roll all too easy.

They found themselves defending their own goal line against the All Blacks a little over 60 seconds into the game, a worrying sign for the side that famously knocked New Zealand out of the Cup three years ago with staunch defence.

There were miscommunication issues, poor decisions and overall a failure to execute to a high standard whether it be choice of running line, or the decision to make the tackle or the tackle itself.

It is hard to discern England’s strategy around competing at the ruck, with players just operating on their own accord and with a lack of urgency at times.

An early passage against the All Blacks shows the concerns with England’s defence which slips into an apathetic state just a minute into the test match.

Flanker Dalton Papalii bailed on releasing the ball to the backs after peeling from a lineout maul and decided to cut back into the traffic and set up a first ruck, tackled by prop Kyle Sinckler.

Communication issues are apparent from the outset for England. Maro Itoje (4) called for reinforcements on the short side and Marcus Smith (10) and Luke Cowan Dickie (2) answered his call.

Jonny Hill and Ellis Genge were already on the short side, but both were fixated on the developing ruck instead of setting up for the next phase.

Genge is a bystander while Hill was in no man’s land. He didn’t get over the ball and isn’t in position as a pillar defender, basically grandstanding at the ruck and giving the All Blacks a free invitation to hold him. England end up overcommitted on the short side with the entire tight five and both halves there, seven players covering the 15-metre channel.

One phase into the sequence England are behind the 8-ball, just from Papalii peeling off the back of the maul and carrying.

On the next phase Cowan-Dickie (2) jumped back over to the open side as the ball came out of the ruck, but slipped off the tackle on Scott Barrett (6) on an inside ball from the lead pod runner Ethan de Groot. Barrett slipped through the tackle but fell over, becoming isolated in behind the England line.

The closest English defender Hill (5) had a golden opportunity to strike over the ball but tripped over and fell to the ground next to Barrett.

England needed to slow the ball and contest right here, but the lock’s execution let them down. With Hill on the ground the All Blacks have rapid quick ball for Ardie Savea to take a pick-and-go against pillar defence that hadn’t formed.

Billy Vunipola (8) is offside retreating through the gate, while on the other side Genge is equally uninterested in covering the space effectively. 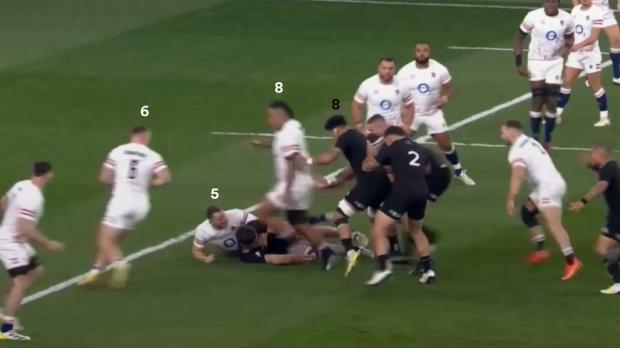 Savea has an open path either side of the ruck to build more momentum for the All Blacks.

Later in the passage the All Blacks release to the backs, anchored on Jordie Barrett (12) who had the option of Rieko Ioane (13) flat of Richie Mo’unga (10) sweeping out the back. 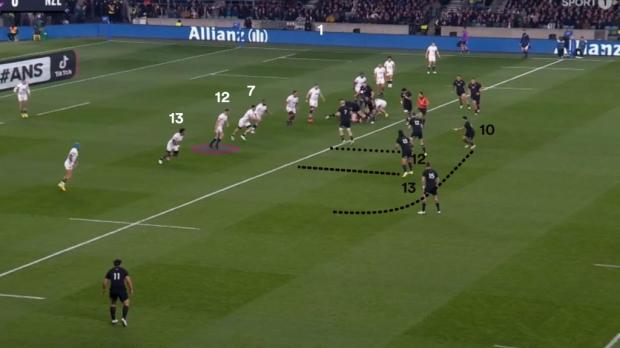 Barrett opted for a short ball to Ioane to puncture the English midfield and target Owen Farrell’s outside shoulder.

Both Tom Curry (7) and Manu Tuilagi (13) are guilty of making bad decisions which end up costing their side on the following phase.

Curry was locked into delivering a hit on Barrett, which left his outside man Farrell one-on-one on Ioane.

The No 7 clattered into Barrett but did not stop the ball and in the process made himself redundant. He then had to scramble back into the line to get back onside.

It was wasted energy by Curry and unfortunately the decision of Tuilagi (13) compounded issues. 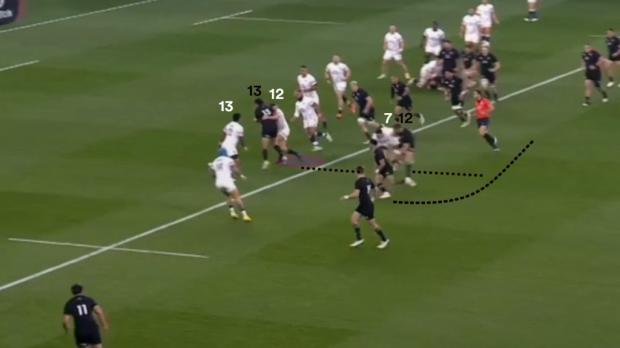 Tuilagi (13) made a late decision to join the tackle even after Farrell had Ioane wrapped up going to the ground.

By diving late into a tackle he didn’t need to make, England’s No 13 further weakened the short side that was already down on numbers.

Kyle Sinckler (3) was desperate to set the edge and tried a shortcut over the forming ruck and tripped up, putting himself on the ground. Curry, having pressured Barrett after the pass, is also still trying to get back onside to form the defence on the edge as the ball was presented to All Black halfback Aaron Smith.

Barrett (12) was able to flatten up for a chance to threaten the line which had been worn thin. With Curry on his heels after scrambling back onside, Barrett beat him with a step to on inside and cut England open for a half-chance. 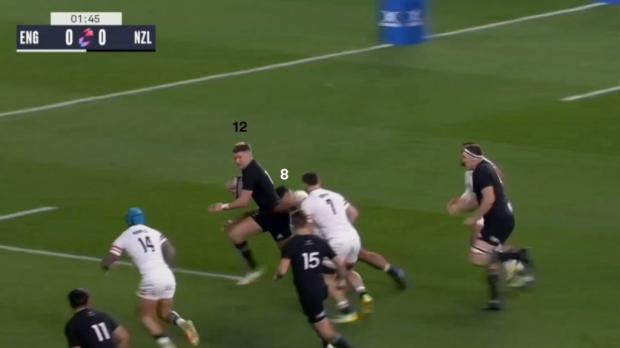 A late cover tackle from Vunipola saved England from conceding, but the All Blacks were only one inside support runner away from scoring from an offload by Barrett.

Even though the All Blacks don’t eventually score in the passage, the number of individualistic and lazy decisions across the entire sequence is what is of concern for England.

They were forced backward inside their own five on the All Blacks’ first launch of the game less than two minutes into a test match with breakdowns everywhere in their defence.

The bad habits on show above have been common occurrences for England who go in-and-out of sync during defensive sets.

They aren’t a lost cause by any means, but they aren’t functioning anywhere near the level they were three years ago under Mitchell when they held the All Blacks to just seven points.

They’ve regressed and standards have slipped.

Whether Anthony Seibold had a fine-tuned defensive system for rugby union is another question, and why Eddie Jones wanted him to oversee his defence in the first place is a mystery.

Regardless of whether Jones is let go or stays, improving the defence is high on the priority list for England. They should not be falling apart two minutes into a Test match.