Gallagher Premiership champions Exeter wiped out an 18-point deficit to beat Northampton 29-26 at Franklin’s Gardens and close in on a home play-off.

Saints played with 14 men for more than hour after lock David Ribbans was sent off.

And there was a double injury scare for British and Irish Lions head coach Warren Gatland as Northampton’s Wales international fly-half Dan Biggar and Exeter number eight Sam Simmonds went off during the second period.

Northampton gave as good as they got during a pulsating encounter that saw Chiefs prevail by scoring four second-half tries after trailing 18-0 at the break.

Their bonus-point triumph – a sixth successive Premiership win – means they need a point against Sandy Park visitors and title rivals Sale Sharks next Saturday for a home semi-final.

It is odds-on that Sale would then return to Devon in the play-offs a week later.

Exeter, who did not lead until the 75th minute, prevailed through tries by Sam Skinner, Stuart Hogg, Stu Townsend and Ollie Devoto, with skipper Joe Simmonds booting three conversions and a late penalty.

Ribbans was dismissed for direct shoulder contact to the head of Exeter hooker Luke Cowan-Dickie, leaving Northampton a man down for 66 minutes. 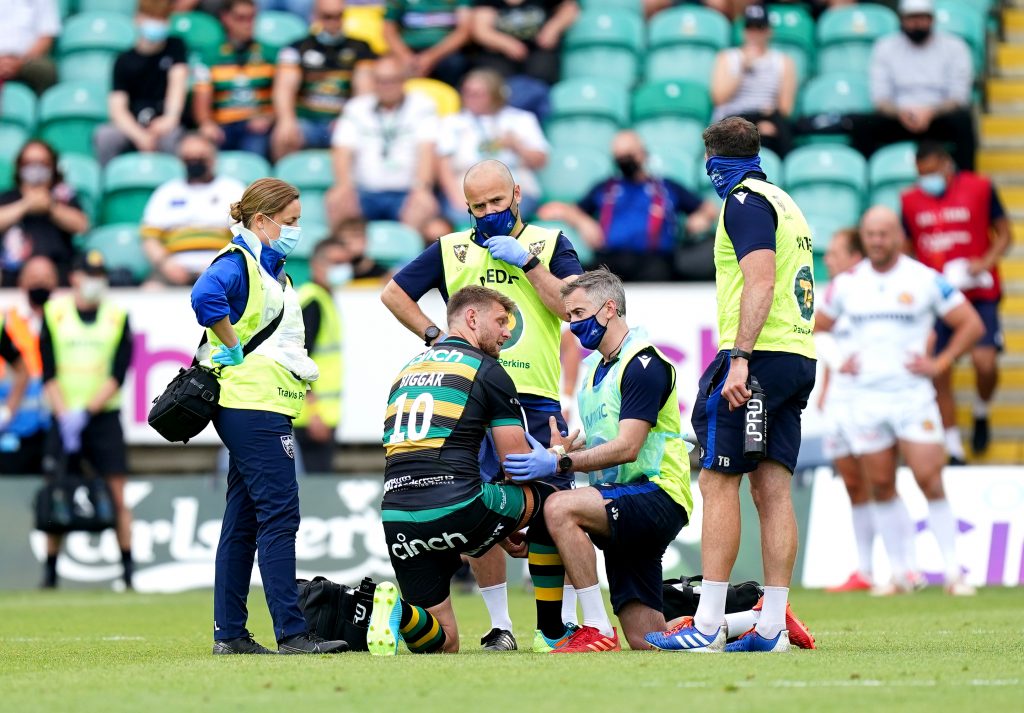 But they pushed Exeter all the way through centre Rory Hutchinson’s try double, a Mike Haywood touchdown and 11 points from Biggar, that included a drop-goal.

A 4,000-strong crowd roared Saints on, and they had an afternoon to savour as both teams delivered some thrilling action.

Hutchinson recovered from a calf muscle strain to feature in Northampton’s midfield, and there was also a start for prop Ehren Painter. 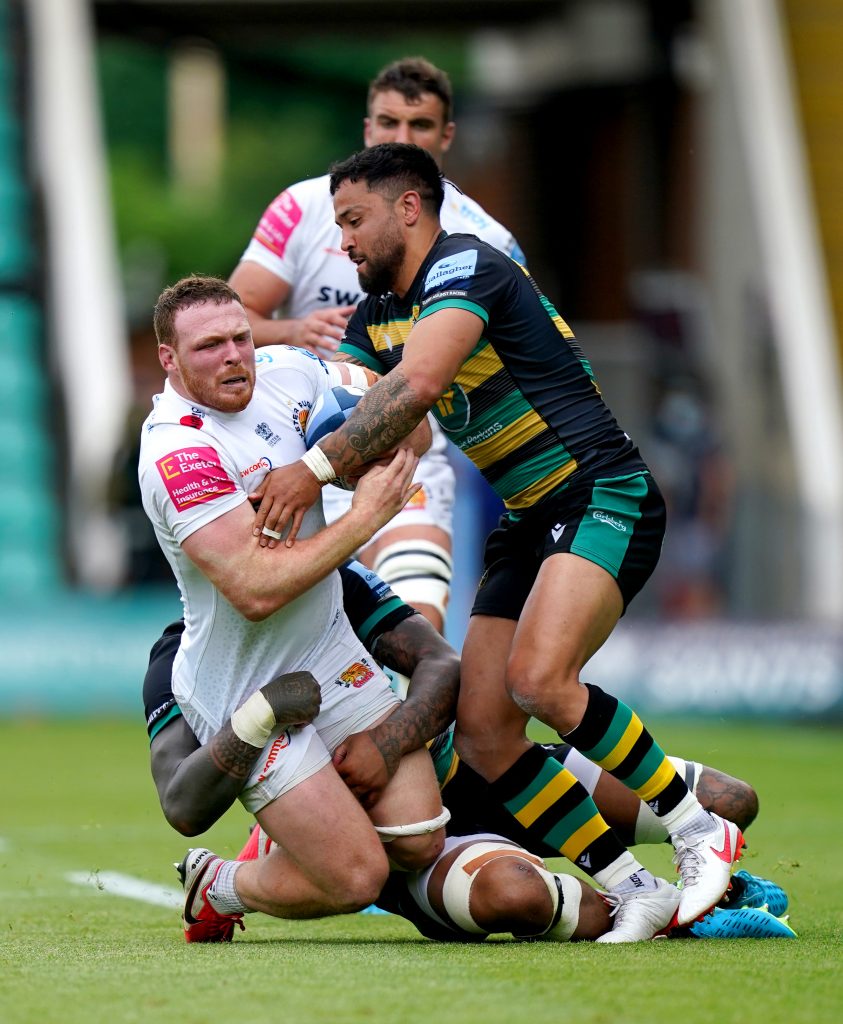 Exeter were without injured flankers Dave Ewers and Jacques Vermeulen, meaning back-row calls for Skinner and Jannes Kirsten, while lock Jonny Gray failed a late fitness test and was replaced by Sean Lonsdale.

Saints blasted out of the blocks, dominating initial territory and possession before taking a seventh-minute lead when Biggar’s short pass sent Hutchinson over from close range.

Referee Craig Maxwell-Keys viewed several replays before brandishing a red card, and any ban could impact on Ribbans’ hopes of making a possible England debut in next month’s Twickenham Tests against the USA and Canada. 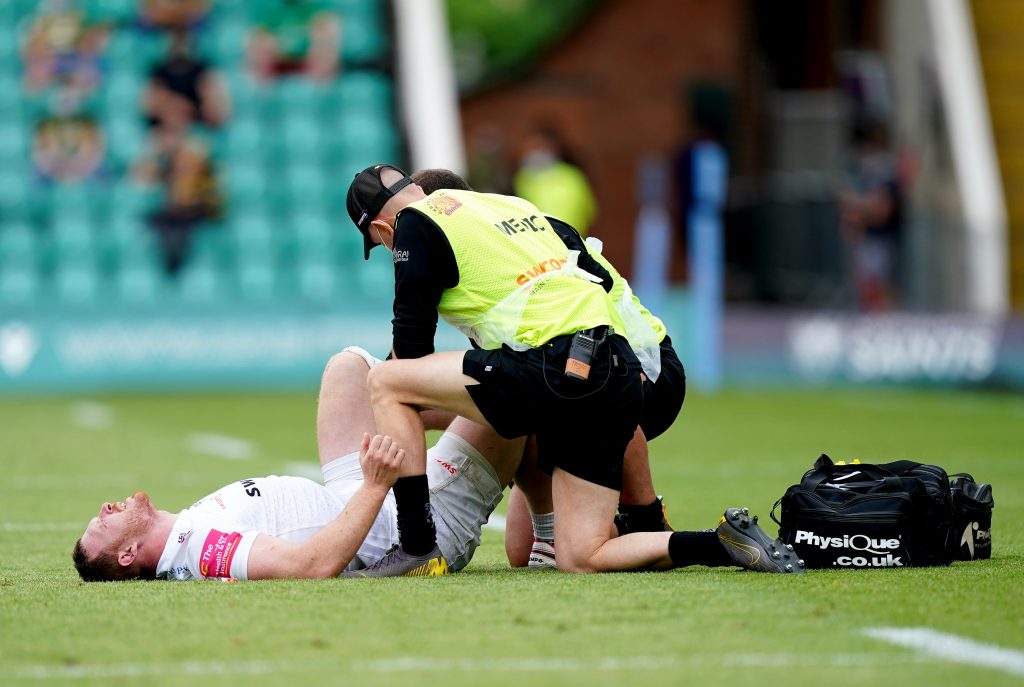 The loss of such a key player, though, did not trouble Saints as Hutchinson carved Exeter open for his second try just five minutes after Ribbans departed, chasing his own kick ahead and regathering, with Biggar’s conversion making it 12-0.

Exeter could make little headway against a superbly-organised Northampton defence, and Saints remained the most dangerous in attack approaching the end of a half they dominated.

Biggar, a towering presence for his team, then kicked a 34th-minute penalty before adding a drop-goal and sending Northampton into the interval with an 18-point lead.

Exeter knew they had to score first after half-time, and it took just over three minutes to oblige after sustained pressure through their forwards ended with Skinner crashing over. 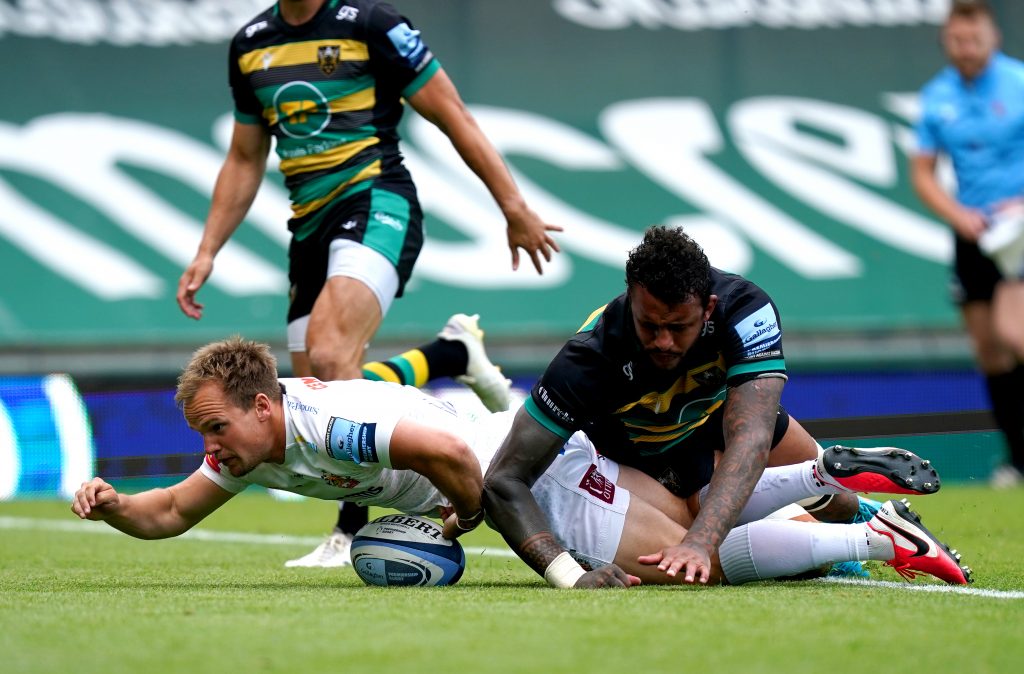 And Saints were back behind their post just six minutes later, again proving unable to withstand ferocious Exeter pressure before centre Ian Whitten found Hogg, who finished impressively and claimed a try that Simmonds converted.

Suddenly it was all hands on deck for the home side, and although a Biggar penalty briefly settled them, Townsend’s try and a Simmonds conversion set up an intense final quarter.

Haywood rounded a flowing move to claim Northampton’s try, but Biggar went off shortly afterwards and Exeter responded by drawing level through a Devoto touchdown that Simmonds converted.

It was breathless entertainment, and Exeter finally overhauled their hosts five minutes from time through a Simmonds penalty that edged Chiefs home.