The rumour mill is in overdrive in New Zealand with strong suggestions that former All Blacks star Dan Carter has signed for the Blues. The Auckland-based franchise are thought to have been in talks with Carter for some time and a foot injury to Stephen Perofeta in training this week may have fast-tracked the chance to sign the veteran on a replacement contract for the Super Rugby Aotearoa competition.

The new all-New Zealand tournament starts next week, with the Blues hosting the Hurricanes at Eden Park on June 14 in their opening match after the regular Super Rugby tournament was cancelled in March due to the coronavirus pandemic outbreak.

Carter is a free agent after finishing his playing commitments with Japanese club Kobe Steelers after the season there was also cancelled due to the pandemic and he has since returned to Auckland with his family.

Tom Vinicombe chats with former All Blacks winger Joe Rokocoko about his time in France and coming through the Auckland Blues playing with Carlos Spencer.

The 38-year-old was in fine form in Japan during recent seasons and his motives for potentially joining the Blues are said to be giving back to New Zealand rugby by sharing his knowledge and experience in the swansong of his career.

Signing Carter, the dual World Cup winner and three-time World Rugby player of the year, as a replacement player would allegedly also only cost the Blues $1,800 per week. 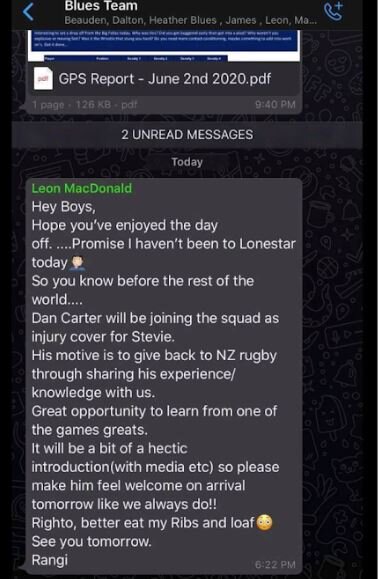 The Blues are expected to hand star recruit Beauden Barrett the playmaking reins for their opening match of the Super Rugby Aotearoa competition, but they also have Otere Black, who was a major factor in steering the team to five wins from seven games before the season shutdown.

Carter’s surprise presence would be the icing on the playmaking cake, giving the Blues depth beyond their wildest dreams, especially in a New Zealand derby competition that promises to be brutally combative.

The sight of Carter pulling on a Blues jersey is unlikely to sit well with staunch Crusaders supporters, though. Carter played 141 games for the Crusaders, winning three Super Rugby titles before shifting north after calling time on his illustrious Test career following the 2015 World Cup.

Speaking recently to Ireland’s Johnny Sexton, Carter suggested players could now push their careers into their 40s. “Using this time off, it’s something you don’t get as a professional rugby player. Having two or three months, maybe it’s going to be much longer, of not having that constant grind, that contact.

“So it is like a mini-sabbatical. I was very fortunate to have a couple through my career, but if it’s used wisely the young players that have been playing heavily for the past four or five seasons, it’s perfect timing.

“Then you look at the other side of the spectrum with more experienced players like yourself [Sexton], you don’t get many opportunities like this. So, if it’s used wisely and you keep training, and as long as your motivation upstairs is still there, I can’t see why you can’t play longer than potentially you thought you might, with having a break like this.

“Obviously, there is some pretty exciting rugby around the corner over the next couple of years, so I told Maro (Itoje, last week’s guest) that I expect him to still be playing when he’s 38 years old, like myself, and with you having a break like this then you can probably push through to the 40s. So, I’m looking forward to seeing that.”

Carter potentially joining the Blues would leave New Zealand rugby stacked with world-class playmakers – a line-up that includes Barrett, Richie Mo’unga at the Crusaders and Aaron Cruden, who was in superb form with the Chiefs after returning from France.

The Blues did not respond to requests for a comment.

"He’d raise his eyebrows, he’d do the old look and you’d know something was coming. He’d just tell you to be ready."

Playing alongside Carlos Spencer in his prime was as scary as it was exciting, former @AllBlacks wing Joe Rokocoko told @TomVinicombe.https://t.co/vHK8ks9VCI