Analysis: What the Northampton Saints took from Wasps to build the Premiership's most prolific attack

Northampton Saints’ fast rise under Chris Boyd continues in 2019. After making the semi-finals of the Premiership in the first year under his watch, the Saints now sit atop the ladder after five rounds with four wins.

The club has scored the most points, the most tries, made the most metres and most line breaks in the Premiership this season.

Whilst smart acquisitions in players like Taqele Naiyaravoro have paid enormous dividends, it’s been the homegrown talent that have matured into key contributors as more and more academy products filter through the ranks. The chemistry of the side has improved immensely and the shared understanding between players looks to be ever-growing.

Scottish centre Rory Hutchinson, wing Tom Collins and fullback George Furbank have become mainstays over the last 12 months that define the Saints style of rugby. Fast, elusive players with quick hands have unlocked the attacking potential of the side.

The Saints’ turnaround has been a pure ‘Moneyball’ play in some regards, the rise has been fuelled by betting on undervalued prospects and younger emerging talent, all bringing accurate decision-making and fast-ball skills that prey on the Premiership’s established guard.

Smaller, shifter, more skillful athletes making better decisions has sped the Saints’ game up. With attacking platforms built around one power athlete in Naiyaravoro, the Saints’ smaller men often feed off the space of what the big Fijian can create.

It has been this set-piece attack that has been powering the Saints’ high-scoring season.

A favourite play for the Saints typically uses two-phases that hit the middle of the field and then quickly move to the edge to where the weapons are.

Doubling down on getting the ball to the backs, the Saints will ‘unhinge’ the wingers and have them work across the field to be involved on the other side. 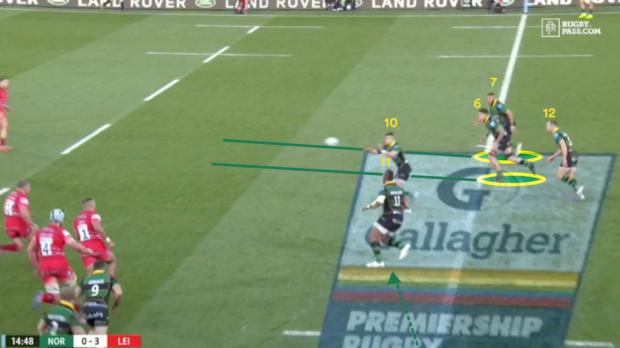 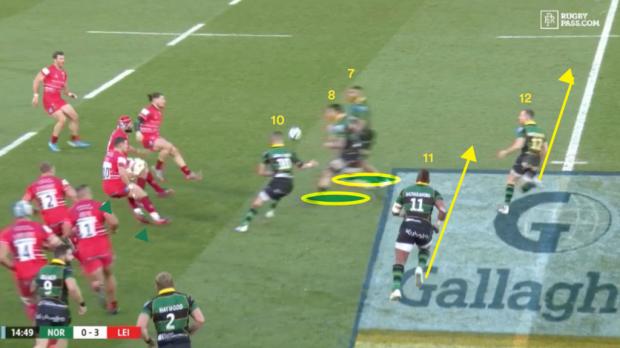 Off the five-man lineout, two loose forwards set up a midfield ruck on a crash ball against Leicester.

Grayson (10), Hutchinson (12) and Naiyaravoro work the same way for the second phase play.

Super quick recycling allows the Saints’ backs to get involved again and use the ‘unhinged’ winger in some capacity to try and create an overlap on the far side. 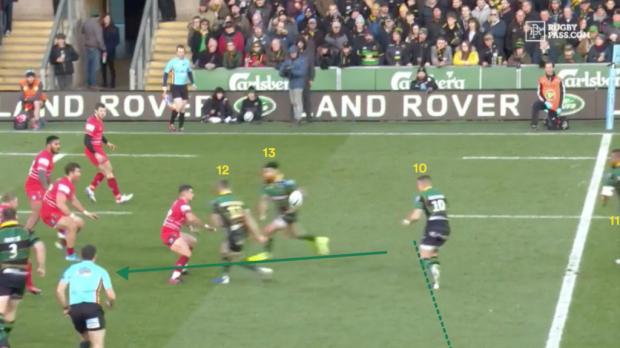 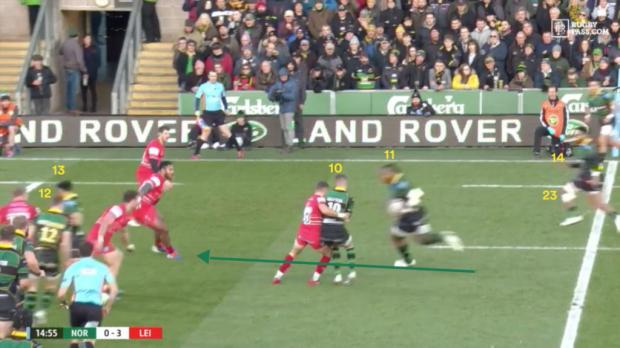 Hutchinson plays a pullback pass to Grayson who hits Naiyaravoro steaming on to a short ball on the opposite 15-metre channel, a long way from his left-hand touchline. He punches right through Manu Tuilagi for a strong carry and offloads in the tackle to Matt Proctor. With Naiyaravoro’s massive frame and silky skills, he is often able to free the ball up and find an offload to keep the movement going, extending or manufacturing line breaks.

Against Harlequins, they run the same play and Naiyaravoro punches through the line before offloading to fullback George Furbank. On the first phase, two loose forwards take the midfield crash ball. They use the same pullback screen pass on the second phase, this time with Andy Symons (12) throwing an over-the-shoulder version to Grayson (10) who taps the ball on to a hard-running Naiyaravoro. 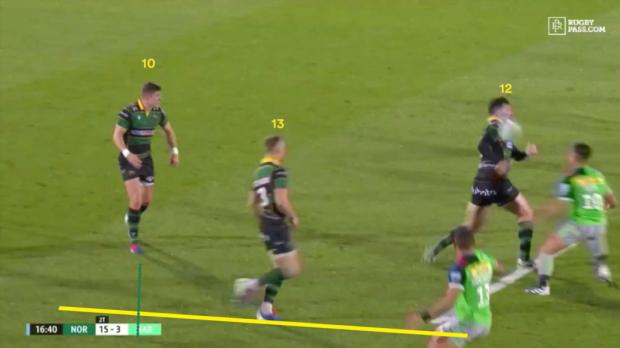 Naiyaravoro is able to free an arm in the tackle of Joe Marchant and provide a one-handed offload to Furbank (15) on the outside who scampers away downfield into Harlequins’ 22.

The Saints continually look to use their wingers in tandem on the same side of the field to ‘overload’ the defence and create openings. With a power runner like Naiyaravoro in career-best form, moving him around is another way to get him more involved.

The Saints use a similar pattern with the other winger, Tom Collins (14), going the same way following a scrum, this time towards where Naiyaravoro is stationed. For this play, the 12 must have some ball-playing nous with the ability to stay square and make the read to either pass flat or throw the pullback pass whilst engaging the defensive line, which both Rory Hutchinson and Andy Symons have done really well so far this season.

On this occasion, inside centre Hutchinson saw an opening and carried, finding the inside shoulder of George Ford and earning some nice metres downfield. On the next phase, Northampton isn’t waiting for forwards to track around and carry around the corner. They know they have speed and quick handling skills available with 10, 14, 15 and 11 in succession towards the right edge.

They just want to shift the ball to their dangerous back three as quickly as possible where Leicester has left the 15-metre corridor unmarked. Grayson (10) gives an early ball to Collins (14) who flirts with the defence briefly before firing a face ball across Furbank (15) to the unmarked Naiyaravoro (11) on the edge.

Naiyaravoro runs all the way into the Tigers’ 22 before the Saints work back towards the left-hand side and score in the left-hand corner through Proctor.

Again the set-piece created a line break with Naiyaravoro heavily involved, which was then converted into seven points with the defence scrambling.

The Saints run this set-piece play frequently which has multiple possible outcomes each time. The success or failure is determined by the decisions made by the ballplayers, firstly the 12 and then the 10, should the pullback pass be made.

Here is the same sweep play off Hutchinson (12), but this time he plays a no-look pass to his centre Fraser Dingwall (22) who exposes Marchant (13) looking out the back towards the sweep runners. Marchant is caught ball-watching inside and loses alignment with Dingwall. Hutchinson makes a great read and plays a short ball with soft hands allowing his centre to hit the hole.

Northampton breaks the line and are eventually brought down a few metres short of the line. On the next phase, the Saints score in the corner with the defence still scrambling.

If space is there, the Saints can play straight to the edge from the pullback pass. 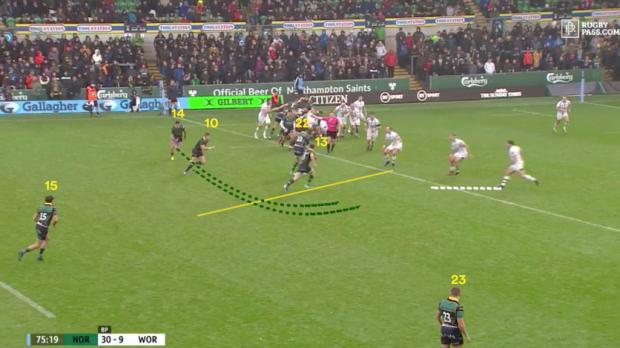 Against Worcester, the outside defence jammed in too hard leaving them exposed out wide. The Saints capitalised on some smart play by their flyhalf Grayson. Andy Symons (22) is able to deliver a ball out the back to Grayson just before taking heavy contact, giving the Saints a chance to release to the edge.

A quick catch-and-pass from the flyhalf puts the ball out onto the chest of a flying Furbank (15). 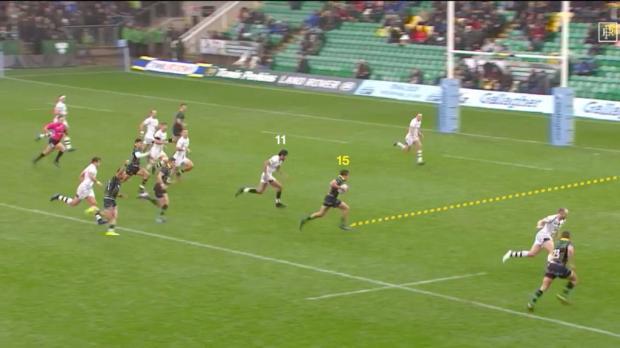 In the wet conditions, Melani Nanai (11) cannot turn and recover to bring him down and the speed of the fullback finds the try line for his second try of the afternoon.

What the Saints have built so far in the 2019/20 season is very similar to Wasps’ attack a few years ago with Cipriani at the helm. Many of the ‘overload’ plays are the same and are finding similar rates of success. Wasps used to get Cipriani and fast wingers like Elliot Daly and Christian Wade on sweep lines to overload the far side of the defence.

With speed to burn there would be too many options for a set-piece defence to cover and it ultimately used to bring Wasps bucketloads of line breaks and tries.

Rory Hutchinson is able to play a similar role at 12 to what Jimmy Gopperth had, and the Saints have outside backs with speed and ball skills like Daly, Le Roux and Wade in Tom Collins and George Furbank whilst adding a totally unique ingredient altogether in Taqele Naiyaravoro to create their own potent mix.

Flyhalf James Grayson at just 21 years old has not just been able to hold it all together but make big plays of his own with Dan Biggar absent.

Under Boyd, the side has also shown far more intent in other areas of the game that look to get the game flowing again.

Maximising the ball from set-piece has been one area, but they also utilise quick lineouts and quick taps to get the game moving. From turnover ball like stolen lineouts, they often spread to the edge through the hands which is a common tactic found in New Zealand. The kick return-game has also been encouraged, bringing the speed of Furbank, Hutchinson, and Collins frequently into the mix looking for counter-attacking opportunities.

With many of the Saints’ backs 25 and younger, they are just scratching the surface of their attacking abilities but are already showing cohesion like experienced campaigners.

Betting on youth and moving towards a fast-paced skill-based game has been a success for the Northampton Saints that is heading for Premiership contention.