Each year new trends surface and become wildly adopted as new ideas are proven to be effective. This year, the hottest trend is lineout plays inspired by principles from an old school trick set play, and the team pioneering this type of lineout attack the most is the Crusaders.

The Crusaders’ lineout attack inside the opposition 22 has become a confusing and complex puzzle for the defence to solve, using the same concepts found in ‘The Wall’ – a set-piece play to disguise the true ball carrier. This play is used from a penalty tap kick, using a line of forwards with their backs turned to the defence forming a wall.

The halfback passes the ball to the wall while a number of players run lines in a multitude of directions around the wall to create confusion and disguise the true recipient.

The Crusaders have adopted the same principles at lineout, using the maul as the perfect tool to ‘hide’ the ball and use the hooker on a slingshot line to bring another running option into play. 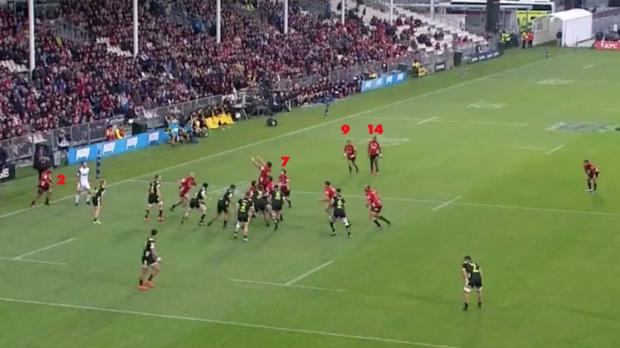 The play starts with a two-man stack including the halfback and winger 10 metres behind the lineout. The openside flanker plays halfback at the lineout, selling the maul to the defence. The maul is formed and the openside Matt Todd (7) peels around to feed a flying hooker, Andrew Makalio (2), coming around the corner. The first man from the stack, Bryn Hall (9) breaks to the blind side to attract attention the other way. Dane Coles (2) sights Makalio coming around the corner and breaks off the maul to chase, which begins to open up a gap on the inside for the second man in the stack, Manasa Mataele (14). 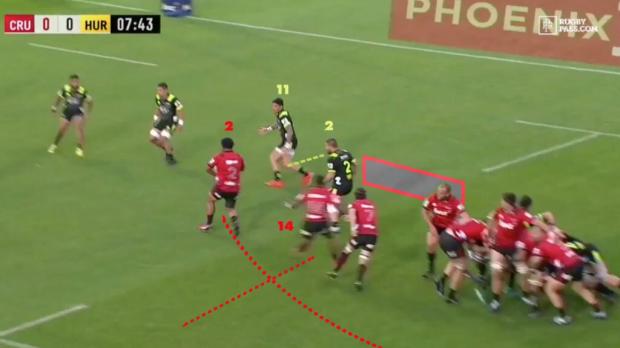 Mataele throws his arms up in exasperation as he is running into an open hole as Makalio carries wider instead of turning in and committing Coles.

He still has an opportunity to play Mataele with a late offload but it goes astray with an open line begging. Late in the game, they pull the same play out but this time the reserves finish it off. This time the blind side decoy of Mitch Drummond (21) baits Wes Goosen (14) and a number of Hurricanes’ players to break away to the blind, opening up a two-on-one for Ben Funnell (16) to play George Bridge (11) on the inside against Du’Plessis Kirifi (7). Kirifi does a great job of covering both options, holding off to make a tackle on Bridge but its too close to the line and Bridge is able to score through contact.

The play succeeded on isolated Kirifi with a two-on-one in short space, as Goosen took the short side bait. Against the Lions early in the second half, the Crusaders score with the same slingshot play.

Crucial on this occasion is how the tail of the Crusaders lineout collapse in to ‘manufacture’ a maul, with Joe Moody (1) trapping Kwagga Smith to open up the hole. Another Lions forward next to Smith joins willfully at the precise moment the ball is released. 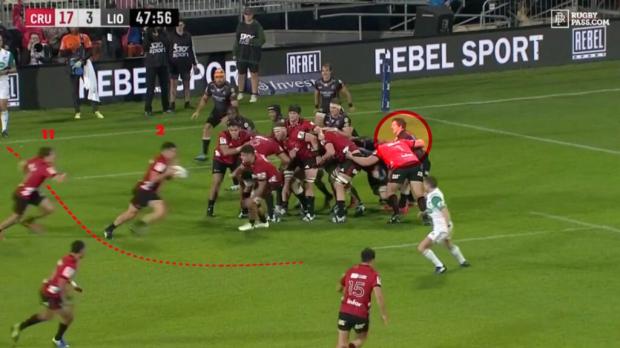 Codie Taylor is steaming around the corner with Bridge in his back pocket and has the edge sealed by Moody, running directly at Elton Jantjies, who has no inside help, in the 10 channel. Taylor takes the easy option and plays Bridge early who is able to go over unobstructed. By the time Smith is released by Moody, it’s too late. With his hips turned out and falling in the opposite direction, he isn’t going to get there, while the Lions never had the blindside winger in position to defend that channel. 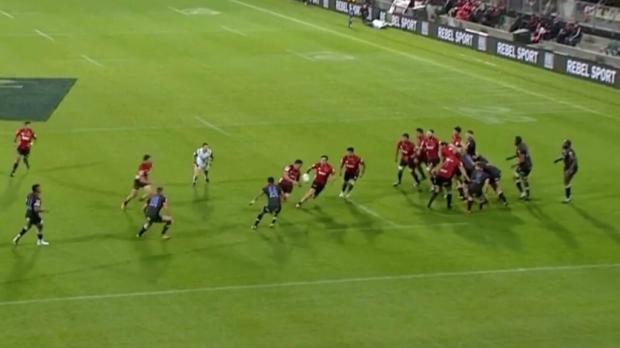 With dynamic athletes like Codie Taylor and Andrew Makalio who possess crafty ball-handling skills, these plays cause untold amounts of problems when they successfully isolate the barnstorming front rowers on little men in the inside backs.

They can either take the contact with the size advantage in an attempt to crash over or use their deft passing to play the winger off the hip. Often space is there to play the pass and bag an easy try.

The Crusaders have shown a variety of plays using the maul as a guise to release runners with the location of the ball hidden behind the congregation of players. At this lineout, Sevu Reece (14) sets up at the front seemingly as a typical bailout option you often see with halfbacks. The Crusaders throw to the middle and do in fact set up the rolling maul. Both Codie Taylor (2) and Sevu Reece (14) join at the back while Ere Enari (9) resumes duties in a normal halfback position. 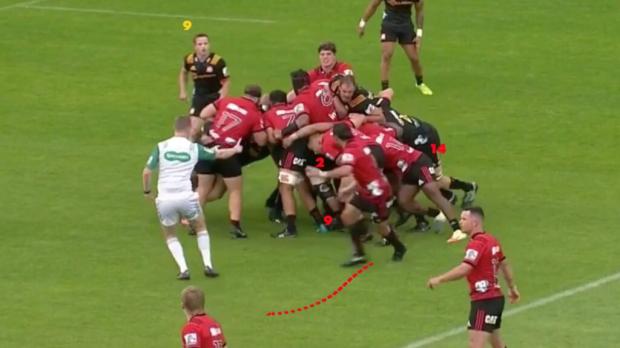 After stalling, Enari breaks to the open side on what looks like a truck and trailer 8-9 type of play. Codie Taylor breaks away with him playing the 8 role, which pulls Brad Weber across. Reece is the actual ball carrier and breaks off to the blind side which now has 20 metres of width. With the Chiefs pack still in the process of disengaging from the maul, they aren’t aware that he has the ball. Luckily for the Chiefs, rookie winger Etene Nanai-Seturo isn’t also drawn across with Weber, and is able to defend the blind side space but the Crusaders create an isolated 1-on-1 matchup for Reece.

Nanai-Seturo is up to the task on this occasion, bringing him down in the tackle, but if the Crusaders can find a way to leave another man on the blind side, a 2-on-1 could be a different story.

The Brumbies also came up with a cleverly designed play using similar principles to target the Jaguares down the blind side where a 1-on-1 matchup was created.

Using ‘animation’ around the maul to create confusion and trickery is becoming widely adopted this season in Super Rugby and there is no team that is doing this is effectively or frequently as the Crusaders after refining it over the last couple of seasons.

It’s this type of continual innovation, even with old ideas, that keeps them ahead of everyone else.