Another Six Nations comeback helped Wales beat England 21-13 at the Principality Stadium to secure a national record 12th successive win and maintain their bid for a Grand Slam in Warren Gatland’s final year in charge.

Gatland had said after the France victory that this was a squad that does not know when it is beaten and that was certainly proven in Cardiff.

Trailing 13-9 with less than a quarter of the game to go, a fine cameo from Dan Biggar and tries from Cory Hill and Josh Adams saw the hosts home.
Scotland and Ireland now stand between Wales and a clean sweep. Here is how the home players rated on Saturday evening.

Liam Williams – 9
Dealt with England’s kicking game superbly and as ever offered an attacking threat at the other end of the pitch. A masterful performance was best summed up late on when he raced onto his own up and under on the right touchline, won the ball and had the presence of mind to roll out of harm’s way. 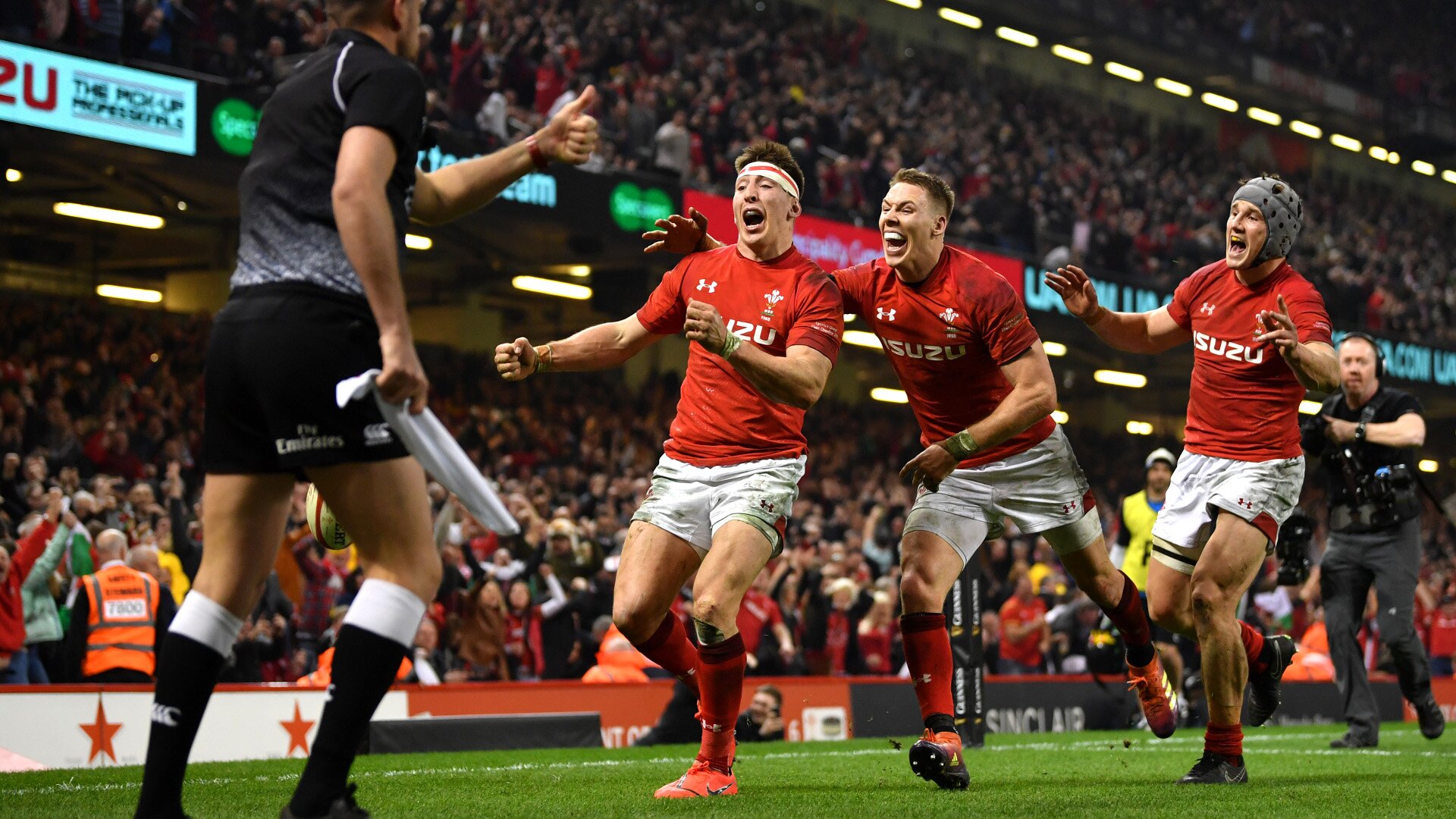 George North – 8
Despite wearing 14 on his back, North switched to the left wing where he gave England problems. Williams and Adams will rightly get the plaudits but this was a game in which the back-three functioned as a collective unit. Eager to come off his wing to look for work and played a pivotal role in Hill’s try.

Jonathan Davies – 7
His best performance of the Championship so far. Defensively sound, making all seven of his attempted tackles, and also a valuable link in attack in the second half.

Hadleigh Parkes – 6
Not someone to shirk responsibility or workload, Parkes put in a commendable shift in Cardiff although this was not his finest performance in a red shirt. Was willing to carry into narrow channels and alongside Jonathan Davies made sure there were no gaps in the Wales midfield.

Josh Adams – 8
Has become a vital cog in Gatland’s Wales machine and enjoyed possibly the finest game of his burgeoning Test career. Having switched wings with North was able to keep in-form Jonny May relatively quiet throughout and was a constant nuisance when Wales had the ball – not least when outjumping Elliot Daly to score a brilliant try. 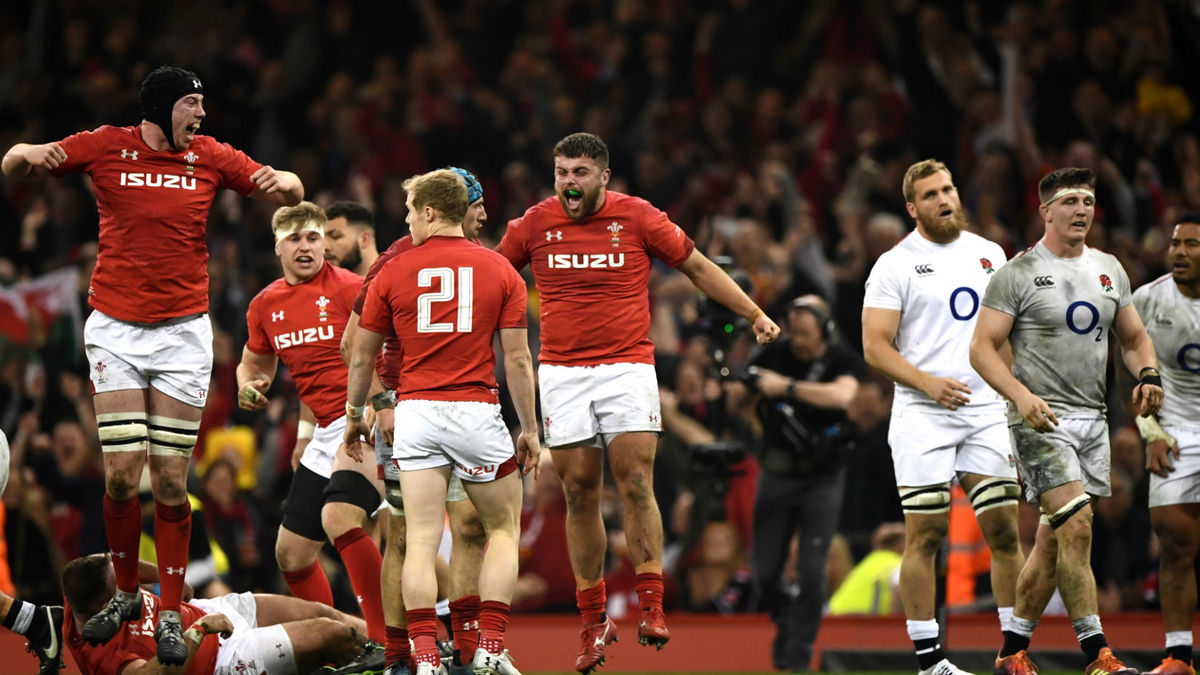 Wales celebrate their win over England

Gareth Anscombe – 7
Entrusted with playmaking duties and did everything that was asked of him. In trying circumstances during the first half, he kept probing and trying to put the hosts on the front foot while his ability from the kicking tee kept Wales in touching distance. Set the tone for the fight back in doing so and ensured that Biggar had a platform to build on.

Gareth Davies – 7
Proved again that he is the best Welsh scrum-half currently available to Gatland at present. His box-kicking remains a slight issue but he possesses an expert eye for a gap and was able to relieve pressure at key moments. Also got through a huge amount of work in defence, tackling Owen Farrell and Jack Nowell in the same move at one point.

Rob Evans – 7
Kept Kyle Sinckler quiet at scrum time, winning a key early free kick as the England prop was adjudged to have collapsed the set piece. Got through his fare share of defensive work and also offered a carrying option.

Ken Owens – 8
An early wobble at the lineout aside this was an excellent performance from the Scarlets hooker. He made 13 carries in all as he tirelessly looked for work during the 77 minutes he was on the pitch. The fact he stayed on so long highlights exactly how important he is to Gatland’s side – and the Welsh rugby public.

Tomas Francis – 7
Picked opposite his club-mate Ben Moon and came out of that battle in credit. Was part of a strong scrummaging performance and got through a lot of work defensively, making eight tackles in all.

Cory Hill – 8
A fine performance was rewarded with his third international try. Hill was picked for his ability around the park and while Wales did not seem to play to his strengths in the first half, he became an increasingly important figure in the second. Eager to look for work throughout and took his try exceptionally well.

Alun Wyn Jones – 8
Led by example in the Wales engine room. Happy to carry the ball into tight spaces – doing so 15 times in all – and put his body on the line for his team on more than one occasion. Might not appear near the top of the tackling charts but was usually in the right place at the right time to disrupt England’s attack when needed.

Josh Navidi – 7
Has arguably been Wales’ standout forward in the Championship so far and put in another tireless display at the Principality Stadium. Led his team’s tackle chart with 12 and was a constant nuisance to England. Does the things that go unnoticed – and does them remarkably well.

Justin Tipuric – 7
Was harshly adjudged to have committed a no-arms tackle early on and got caught out for Tom Curry’s opening try. But this was another impressive performance from the Ospreys back-row who offered so much on both sides of the ball. Got through 10 tackles and linked play well in the loose.

Ross Moriarty – 7
Continues to prove himself a more than able deputy for Taulupe Faletau at the base of the scrum. Took the game to England from the first whistle until he was replaced late on, finishing the game with 30 metres gained from 20 carries. It is easy to forget that this was only his second start since the middle of December.

Replacements
Elliott Dee – N/A
Only came on for the final three minutes as Wales closed out victory.

Nicky Smith – 7
Came on for the final quarter and ensured that the Welsh scrum kept moving forward. Looked for work on both sides of the ball.

Dillon Lewis – 7
Another who came on for the final quarter and helped Wales close out the win. Is a real carrying threat and useful over the ball.

Aaron Wainwright – N/A
Only came on for the final three minutes as Wales closed out victory.

Aled Davies – N/A
Another who came on in the final four minutes to see the hosts over the line.

Dan Biggar – 9
Emerged from the bench to steer his side to victory. Provided the control that the team needed in that situation and provided an impetus in attack. Played a major role in both of his side’s tries, exploiting a tiring English defence ruthlessly.

Owen Watkin – N/A
Came on for Parkes in the final minute with the game won.