The personal wealth of the average professional rugby player

'We consistently do random testing' Next
Back
Gallagher Premiership

The personal wealth of the average professional rugby player The personal wealth of rugby players is widely misunderstood.

It would probably shock people to know, most Saracens players could not afford to co-invest and although Israel Folau might have been the ARUs highest-paid player, it’s perfectly reasonable to say a person cannot pay huge legal costs while not earning income. As is often the case, two things can be true at once.

Rugby players are not poorly paid, their earnings far outstrip that of their non-rugby playing piers but they are certainly not rich.

The perception of fit young men, covered in sponsors, playing on TV and in front of 1000s gives many the wrong impression.

An academy player could reasonably expect to earn £18k a year, rising to about 40k once they break into the first team.

When the player becomes a fully-fledged senior squad member the average premiership contract is about £120k a year but they could get substantially more in the right market and with a bit of luck.

At the peak of a Premiership career a good club player might get just short of £200k before their earning start to decrease. One player told me that at 33 he was playing for less money than when he was 21, which gives you a good indication of the drop off in earnings.

There are obviously exceptions, club captains, internationals and marquee players will all get substantially more.

One of the strange quirks of the salary cap is while more money is added to wage bills, it almost all goes to top players. Squads will then add depth using cheaper, younger players from the academy or from overseas.

Saracens’ remaining three England players who have yet to feature this season have all been included in Mark McCall’s XV to face Bath on Friday night. pic.twitter.com/8cC876u3A2

The pressure on mid-range players means wages are stagnating and in lots of cases they drop in real terms. To steal a phrase, rugby really does have a squeezed middle.

Even so, earning £150,000 a year for something that you love sounds pretty good, and it is. Conceivably you could earn this amount of money from about age 22 to 30. In other words – £1.2million over eight years sounds great!

Yet all that glitters is not gold – the tax bill will be £60,000 a year. A mixture of higher rate tax and losing the personal allowance means that players might be paying an eye-watering 60 per cent tax on a portion of their income.

They might also have reduced limits to what they can put in a pension.

Interestingly if you earned the same amount over 20 years, £75k a year, hardly a small salary, you would take home £840k in total. In other words, the HMRC loves mid-range rugby players.

This probably goes some way to explain why Steve Young the Quarterback of 49ers fame opted the get paid $40 million in the form of a 43-year annuity when he played in the now defunct USFL for the LA Express.

The LA Express Wide Receives collected their last pass from Young in 1985, Young will collect his last Cheque from the LA Express in 2027, anyway, I digress.

Bath could be set for quite a dunking as Saracens are going full metal jacket in the Premiership on Friday nighthttps://t.co/opQBIivyYb

Players’ income is not guaranteed, a normal person’s future is reasonably secure – they could expect to continue work until they decided to move jobs or retire. Players are stuck with the uncertainty of a two or three-year contract, after which who knows what happens.

A player’s future earnings can be dictated by many factors, for example, talent already available on the market, teams available salary cap and the player’s injury history.

A player might also need to decide whether it is worth taking a lower wage to play for a club that qualifies them for a national team. The money from a world cup campaign, if invested properly, can be life-changing but is it worth the risk? It too is a very hard decision for a player to make.

Regarding international payments, if I was to give free advice, it would be: never rely on your international money and never ever spend it (until you retire).

In the event a player never plays for their country but still manages to save half his net pay over eight years (£45k a year), he would run out of money before 40 unless they made substantial changes to their expenditure and further non-rugby employment was found.

As important as income is, it’s always the other side of the coin that is more important: spending.

More than anything else expenditure will dictate someone’s long term financial security. High profile, high earning players often find themselves in all manner of financial predicaments and often attract the wrong kind of attention. This is why it’s so important to control your expenditure if you’re a rugby player.

I will give you a real-life example: I met a car salesman who leased luxury cars to footballers in Manchester.

He explained footballers lease multiple cars at once based on a simple calculation. The calculation? If the average household spends 30 per cent of its income on car payments and therefore so should footballers, for many footballers that means having 5 cars, told you it was simple.

The only thing worse than the salesman’s calculation was that I met him in a bar with a rugby player.

Expectations on players are massive, even a player on 18k in the academy earns far more than his student friends, so guess who is always first to the bar, or good for some cash at the weekend?

There are also inter-club dynamics, the competitive nature of sportspeople often means players spend up to the highest spender rather than take the sensible option. 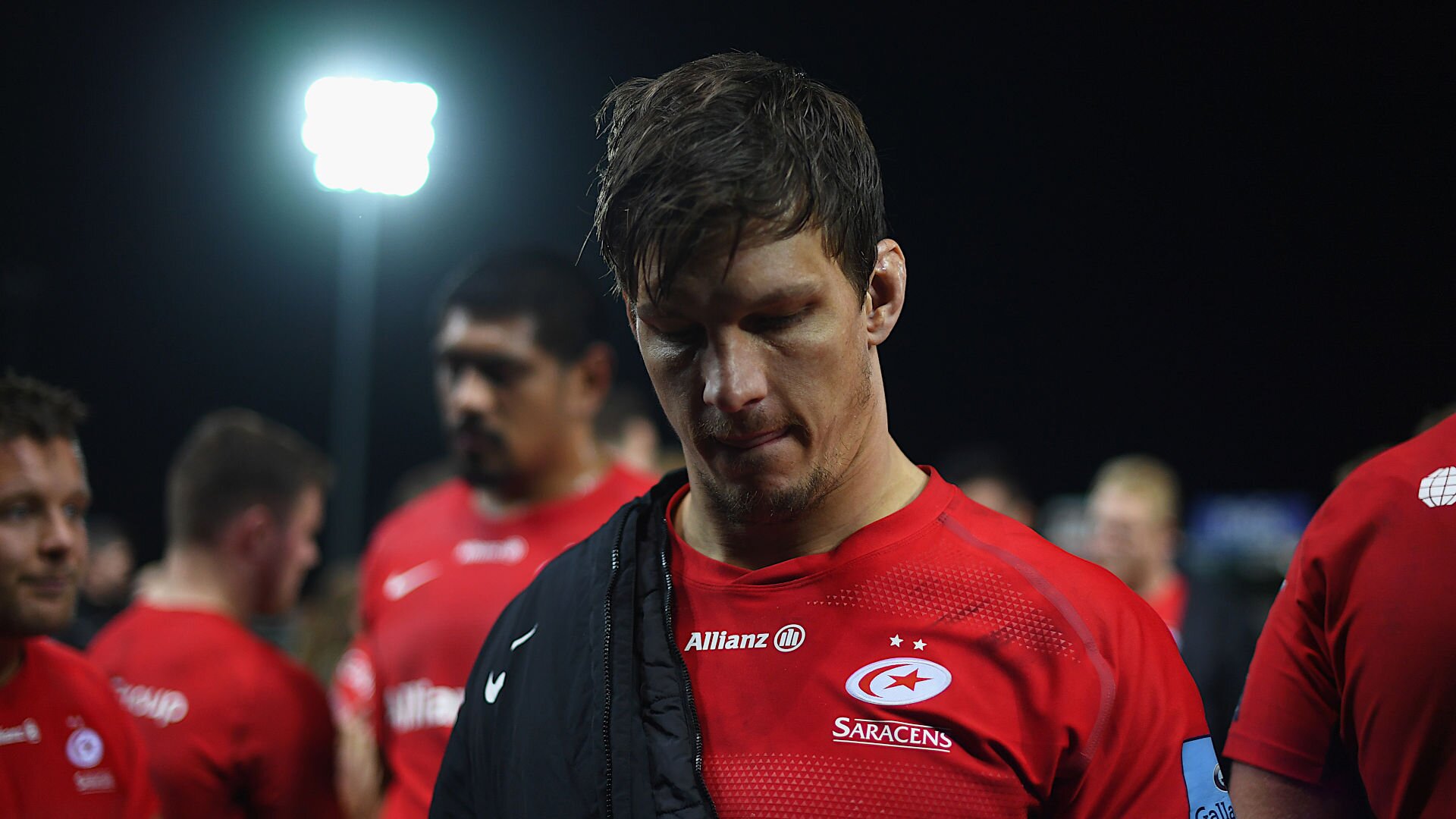 In the space of eight years, a player might go from spending only beer money and living at home with parents, to getting married, paying for a house deposit, funding two cars and supporting a young family. Throw in some trips to Dubai and a couple of weekly dinners out, a player can easily spend £75,000 a year.

The situation for players from the Pacific Nations can be even more complex, as their strong family ties and a remittance culture can lead to players supporting many households back home.

By the time a player starts to understand the importance of investing and saving it’s often far too late to accumulate the assets needed to sustain their lifestyle. Young men, for the most part, lack the wisdom to deal with the huge jump in income.

A professional with a comparative salary like a headteacher or a hospital consultant will earn in the region of what an average player earns but only after a long incremental pay rise.

In a guest opinion piece, @Jbeardmore of the @RugbyPodcast comes to the defence of @Saracens chairman Nigel Wray.https://t.co/1rkA9isQgf

A CEO will have a whole lifetime of managing budgets, negotiating pay and all manner of other things that means that are more able to handle their higher salaries. In short they learn the value of money.

Even players saving a couple of thousand pounds a month into an investment would only end up with £165k.

Without a new job and significant cuts in spending that money would last less than three years.

It’s strange that with all the ‘awareness’ around mental health the subject of money never comes up, even though so many players struggle moving away from the game.

The stats bear this out. According to a 2009 Sports Illustrated article, 35 per cent of National Football League (NFL) players are either bankrupt or are under financial stress within two years of retirement and an estimated 60 per cent of National Basketball Association (NBA) players go bankrupt within five years after leaving their sport. A quick google for bankrupt Premier League footballers also bears this out.

Why did only ‘stars’ co-invest at Saracens?

My hunch is it was probably beyond the means of most squad players, rather than been some elitist selection process for the haves and have nots. The dull answer might simply be that London property prices are too high, even for “well off” rugby players.

Could Israel Folau afford his own legal bills? Maybe but we have no idea what his outgoing are or how many mouths he is feeding.

Lastly I will end with a conversation I had with a recently retired player. After showing him all manner of cash flow charts and player income projections he concluded, with a bit of embarrassment, that after over a decade as a full time professional in the Premiership he had underachieved.

Yet, his lack of a big contract meant he was never addicted to the income, he was able to retire on his own terms and his families’ transition from rugby was much easier for them then it is for a lot of other players and their dependents.

He did however, enjoy the amazing experience of playing professional rugby for over a decade with all the intangible benefits that come with it. From that angle I think he might have been one of the lucky ones and on reflection I think he probably agrees too.