Everything is against this Scotland team... and best not mention Finn Russell

Italy name team for Wales Next
Back
Internationals

Everything is against this Scotland team... and best not mention Finn Russell

The grim business of the Finn Russell affair, the Scotland fulcrum’s murky exit from the Six Nations camp and the messy hullaballoo that followed, has enveloped the preamble to a hugely important championship.

Instead of talking about Ireland on Saturday and the monumental tournament looming before them, Scotland’s players and coaches have been grilled on what happened in the team hotel last weekend, what effect Russell’s shock departure has had on them, and what they are going to do in Dublin without their wonderful play-maker.

Reading what Gregor Townsend, Fraser Brown and Huw Jones have said in the aftermath of Russell-gate, the resentment over the way people are talking about the situation is clear.

“I would say the media and the public are making more of a meal of the whole story than us, to be honest,” said Jones. “If you ask the players, none of us are really that bothered.”

WATCH: Fiji fans feel Cotter is the right appointment to take them forward.

“Finn went back to France and that’s where we are. We’ve moved on now. The team moves towards its goal of playing to its potential,” said Townsend.

“I think that is a bit disingenuous to the other players in our squad,” said Brown, when asked if Russell’s absence shredded their chances of a first Dublin win in a decade.

They are patently irked by the perception that Scotland are nothing without Russell, that if he isn’t there conducting the orchestra then they might as well abandon all hope, roll over and surrender. They sound fed-up of talking about the whole thing.

The upshot will be fascinating. Whatever Townsend and Brown and Jones say, Scotland are a diminished force with Russell out of the picture. Will there be a backlash? It will need to be thunderous to get anywhere near a team that until recently were ranked number one in the world.

Ireland and Scotland name two fresh teams for the first round of the Six Nations ? pic.twitter.com/2HSut8VL3z

This is a championship that could restore public confidence in Townsend or leave the head coach in an extremely perilous position. After the injury-ravaged and tepid Six Nations of 2019 came the desperate group-stage exit at the World Cup in Japan, a path to doom that was set by the walloping Ireland gave Scotland in the opening match of the pool.

Everyone knew the kind of brutality Ireland would bring – Townsend as well as anybody – that day and the way they would go after Scotland physically and relentlessly. The Scots were powerless to do anything about it. They had months of preparation time for this most seismic of fixtures and they barely fired a shot. The helter-skelter loss to Japan was wounding, but this 27-3 humiliation brought far more anger and a far greater depression.

Scotland last won in Ireland ten years ago, the famous triumph in the final game at Croke Park inspired by a colossal Johnnie Beattie try and an even more colossal touchline penalty from Dan Parks.

‘What is blatantly clear is that Scottish Rugby cannot allow this to fester any further. CEO Mark Dodson is being paid nearly £18,000 a week and he ought to take responsibility for bringing about an amicable resolution,’ writes @JLyall93https://t.co/3GY7ClKRgW

Those numbers are bleak. They don’t tell the whole story in that during the Six Nations clashes of 2018 and 2019, Scotland had big chances to score tries but didn’t execute. What they do indicate is an entrenched and overwhelming Irish dominance in the fixture.

Some of the Scotland team that take the field on Saturday have beaten Ireland. Many of them have conquered the provinces domestically, particularly in Glasgow’s run to the Pro12 title nearly five years ago. But in the biggest, most recent games, Edinburgh have lost to Munster in the Champions Cup quarter-finals and Glasgow lost to Leinster in the Pro14 showpiece despite each Scottish team dominating swathes of each contest. 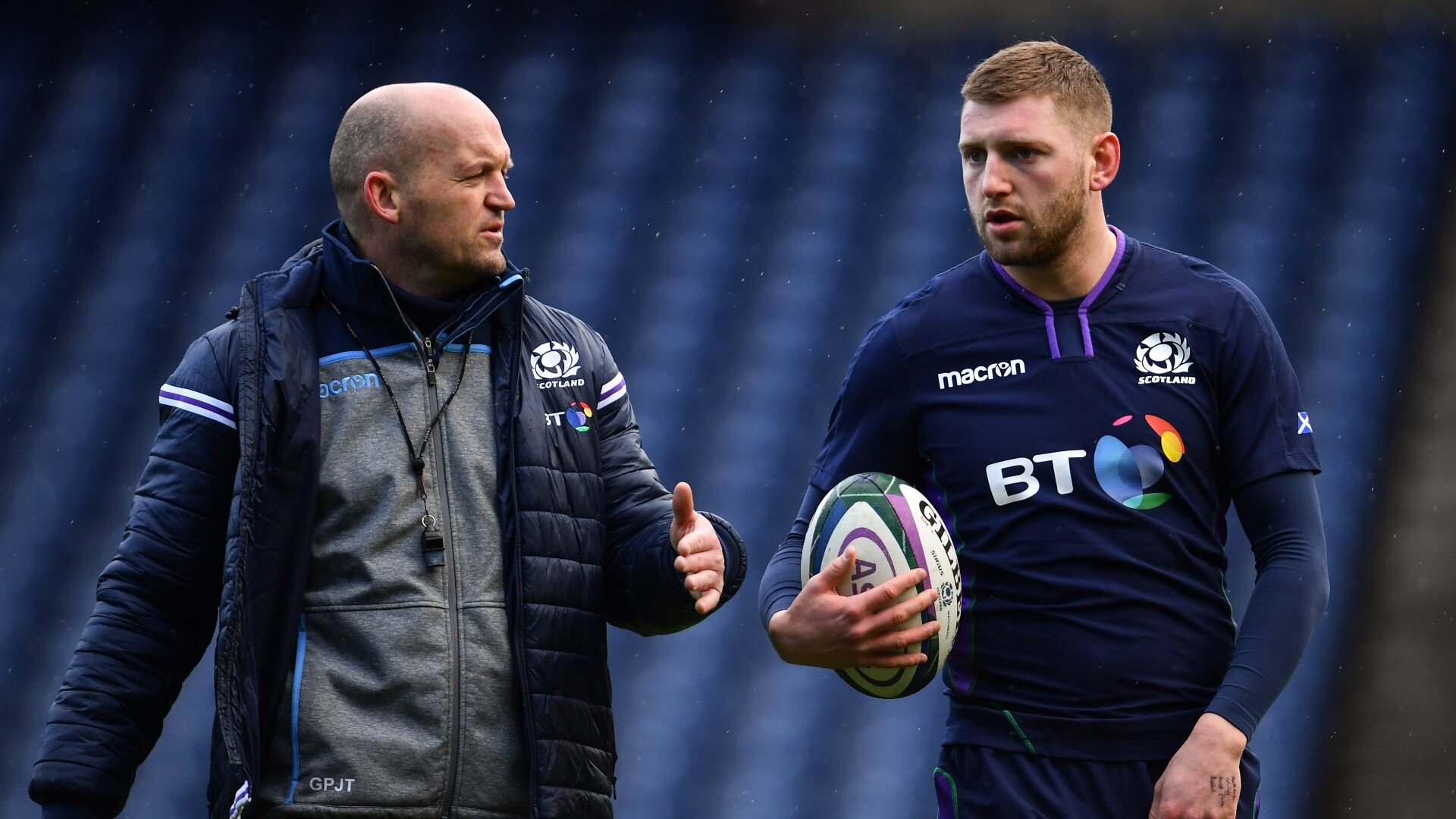 Matt Taylor, the recently departed defence coach, suggested a wastefulness and imprecision in attack contributed to the softness of a lot of those scores.

“Sometimes it’s purely defence; sometimes it’s on the back of poor attack or putting yourself in a poor position,” he told RugbyPass earlier this month.

“What I will say is that everything is inter-related, what you do with the ball in attack sometimes puts yourself defensively under pressure and when you’re not doing a good defensive job, your attack suffers. That was the case in some of those games.

“If you look at the Japan game, we turned them over five, six, seven times before we actually conceded our first try. The frustration was that we didn’t apply a bit more pressure with the ball at the start.”

Since the World Cup, the brilliant Joe Schmidt has moved on and his lieutenant, Andy Farrell, has taken over as Ireland coach. Farrell is known as a defensive genius. His line-up is settled and experienced, but how he evolves his team will be crucial. Ireland have 562 caps to Scotland’s 388 and their side is littered with Grand Slam winners and Lions. Captain Johnny Sexton remains a massively influential figure and partners Conor Muray for the 57th time. In the uncapped Leinster man Caelan Doris, Farrell has a magnificent young number eight in the Jamie Heaslip mould. His game plan, though, will be interesting – stick with the structure of Schmidt or unleash a more flamboyant blueprint. Whatever he does, the physical test awaiting Scotland will be monumental.

Townsend’s team has long lacked brutality in these contests. Nick Haining, the Australian number eight making his debut, gives them a heap of that on the carry. So does Rory Sutherland at loose-head, winning his first cap since the summer of 2016 and an injury that put him in a wheelchair.

Scott Cummings brings athleticism in spades in the second-row, Huw Jones is confident and swaggering again in midfield and on the bench, Cornell du Preez has done a sensational job of forcing his way back from a gruesome injury and the international wilderness. Although some have retired, only five of those who started against Japan do so again at the Aviva. Change was needed and change is coming. It’s an encouraging line-up, but for the moment that’s all it is.

Scotland are missing Darcy Graham, the scintillating winger who was a shoo-in to start, and so much will rest on the shoulders of Adam Hastings. Over the past year, his game has grown and flourished, he doesn’t tuck and run at the first sign of trouble, he steers a match so much better and with such greater composure. He is in the form of his career and looks at ease in a Glasgow jersey. How they miss him when he isn’t around. In Warriors’ madcap 31-31 draw with Exeter this month, Hastings was imperious, barring one ill-advised drop-goal attempt into a gale.

A Six Nations start in Dublin has fallen from the sky and into his lap, thanks to Russell’s exile. Josh van der Flier, Doris, Murray and their pals will be salivating at the prospect of visiting a heinous savaging upon such a callow 10. This is a huge and ruthless step up.

It will take something wholly unexpected to pull this off, the performance of a lifetime for many of these players. There have been wins over Australia and France and Argentina and England, but if Scotland and Townsend can triumph in Dublin, it will be the single biggest result of his time in charge.