The making of Antoine Dupont Next
Back
Six Nations

Scotland made four changes to their starting line-up for Saturday’s Six Nations finale against Wales in Llanelli, with Stuart Hogg and Finn Russell among those restored to the XV following last weekend’s Murrayfield win over Georgia.

The game was always going to be a significantly bigger task than their thumping of Georgia, but this was maybe the strongest Scotland team that head coach Gregor Townsend has ever had the opportunity to select from.

Yet Scotland won for just the second time on Welsh soil in the history of the Six Nations.

15. STUART HOGG (CAPTAIN) – 7
The windy conditions made kicking a lottery and Hogg was hardly immune. Continues to be Scotland’s premier attacking weapon with ball in hand, seemingly beating Wales’ defenders at will.

14. DARCY GRAHAM – 5.5
An early fumble from a poor pass was an innocuous start for the Edinburgh flyer. Biggar appeared to be targetting him with the high ball, and his case wasn’t helped playing into the sun in the first half – but he survived. Smashed through the tackle of Rhys Patchell in the second half. Four turnovers conceded blotted his copybook.

13. CHRIS HARRIS – 6
Not a highlight-reel performance but he carried well throughout and was a defensive brick wall in the midfield.

12. JAMES LANG – 5
Truth be told the Harlequin struggled to make a mark in his first Six Nations start and looked like a player a little too eager not to make a mistake.

11 BLAIR KINGHORN – 6
Largely kept in check by Wales’ press defence. An unconverted half-chance in the first half maybe summed up a game in which the rangey winger failed to ignite.

10 FINN RUSSELL – 6
Something of a mixed bag for Finn. Opted for and missed an early kick at posts in blustery conditions but made plenty of opportunities for those around him, although sometimes said teammates struggled to keep with the Racing 92 man’s schemes. Hobbled off, worryingly for Scotland.

9. ALI PRICE – 7.5
A tidy service from the Glasgow Warriors man. His box kicking was sharp but you would have liked to see a few more of the breaks that littered his early Scotland career.

1 RORY SUTHERLAND – 6.5
Pinged early for collapsing, with referee Andrew Brace clearly eager to stamp his authority on the set-piece. His explosiveness with ball in hand saw him bag 18 metres from 3 carries in the first 40 minutes, a fine return for a loosehead.

2 FRASER BROWN – 5
Lineouts were a nightmare for both sides. Victim of an awful ‘no arms’ tackle decision against him, but overall a rather error-ridden performance for the hooker.

3 ZANDER FAGERSON – 6.5
Popping Rhys Carré in the 25th minute was a highlight at set-piece. Made 18 metres from 4 carries in the first half, which spoke to his increasingly prominent role as go-to metre maker in traffic.

4 SCOTT CUMMINGS – 6.5
Was one of a number of Scottish forwards who struggled to make inroads despite having the lion’s share of possession in the first half. Did a fine job at the lineout.

5 JONNY GRAY – 6
The Exeter Chief had a relatively quiet outing by his own high standards. No doubt central to a dogged Scottish fightback.

6. JAMIE RITCHIE – 7.5
Pretty anonymous opening 36 minutes given his growing reputation as Test blindside, that is before making a trademark, telling turnover in front of his own try line to relieve pressure. Grew into the match in the second half and won the BBC Man of the Match. 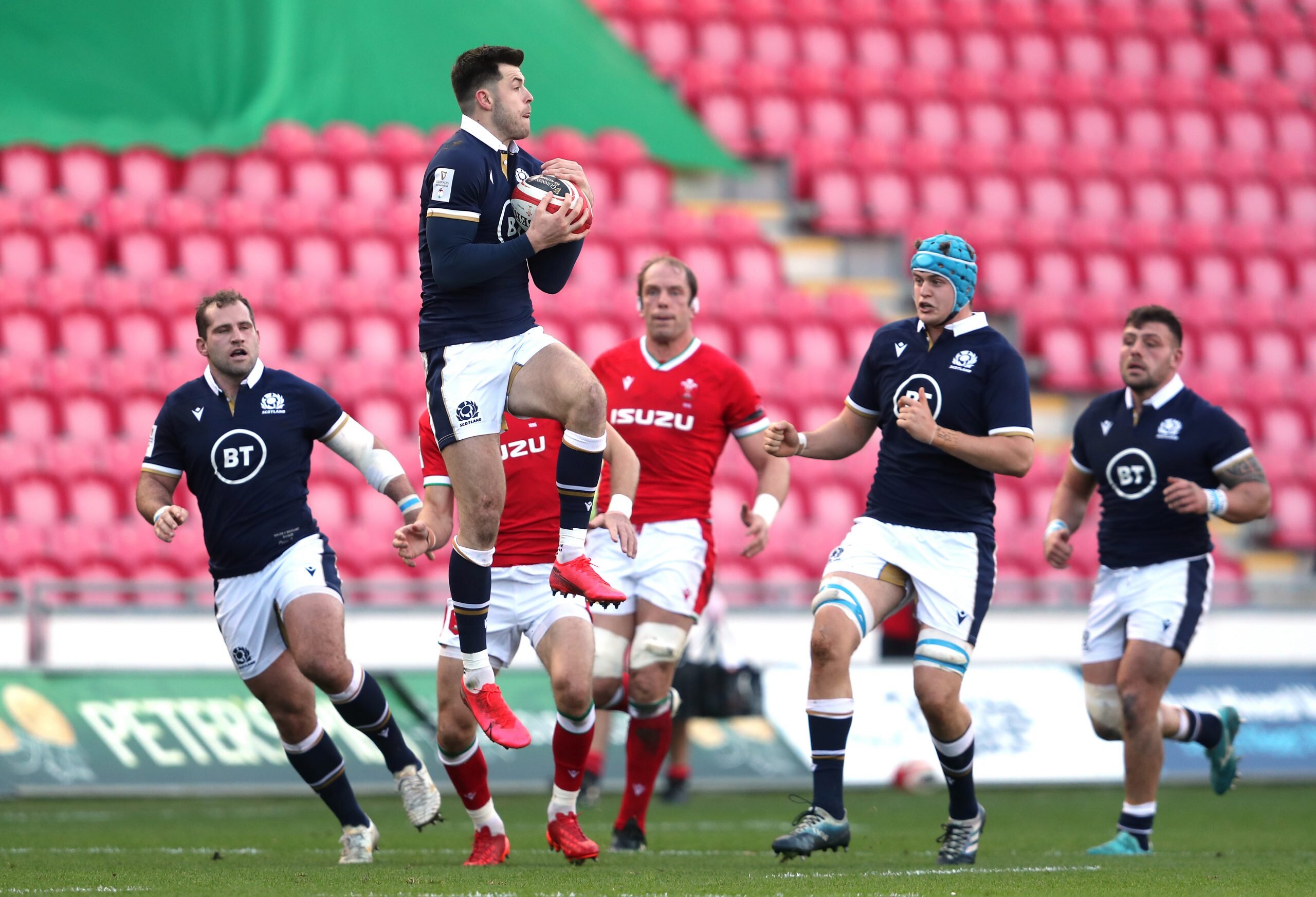 7. HAMISH WATSON – 7
One of the few Scottish forwards that did make a dent in the red wall. Played his part in a meaty Scottish performance.

8. BLADE THOMSON – 6
The Scarlet will have been eager to make an impression on his home ground. Seemed to injure himself putting in a massive defensive hit in the 52nd minute. He’s an excellent lineout option but he’s yet to prove he’s Scotland’s answer at No.8.

SUBSTITUTES:
16 STUART MCINALLY – 7.5
A slimmed-down McInally definitely brought plenty of kinetic energy to the contest. The benefactor from an unstoppable maul on the 61st minute.

17 OLI KEBBLE – 6.5
The giant South African made his Six Nations debut in the 53rd minute. Used his mass to help win a massive scrum in the 70th minute. 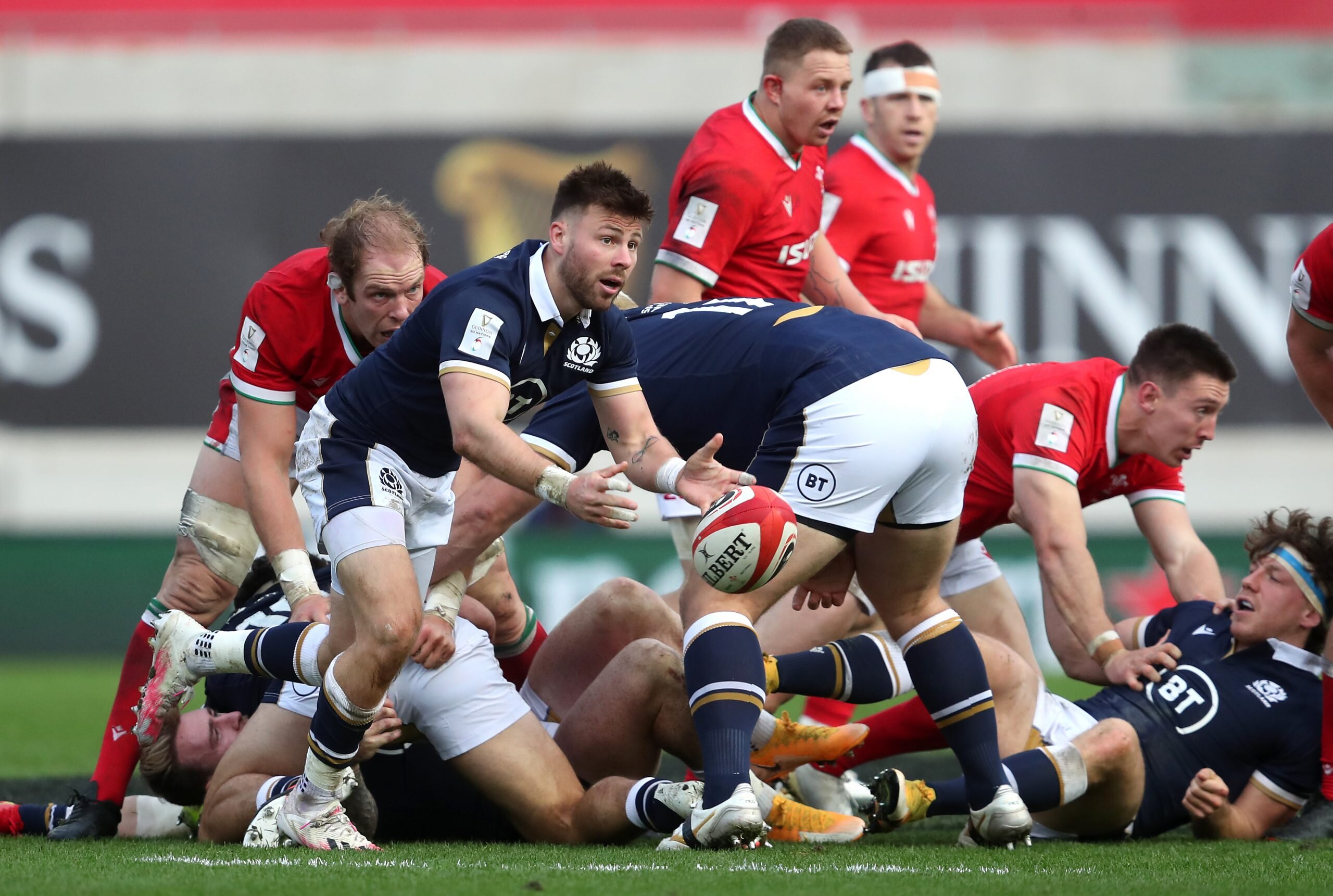 18 SIMON BERGHAN – 6
Scotland’s scrum seemed to benefit from the full front row swap. Berghan can take some of that credit.

20. CORNELL DU PREEZ – 6
Came on for Blade Thomson in the 53rd minute but didn’t improve on the New Zealander’s innings.

21. SCOTT STEELE – 7
Came on for a debut on the right-wing. A big ask for the young man but he delivered.

22. ADAM HASTINGS – 7.5
Insisted on kicking despite the conditions making it a tricky skill. Picked up a shoulder knock in defence early in the second half but he found holes in the Welsh defence that weren’t there in the first half.

23. DUHAN VAN DER MERWE -7.5
Did enough to spook Leigh Halfpenny into a rare knock-on and the big man carried hard in his cameo.