END_OF_DOCUMENT_TOKEN_TO_BE_REPLACED

'We thought Quins were arrogant, thought they were above themselves'

END_OF_DOCUMENT_TOKEN_TO_BE_REPLACED

END_OF_DOCUMENT_TOKEN_TO_BE_REPLACED
'That is not the game': Ex-Bok coach De Villiers calls out Erasmus' one-sided approach
S
Snash 4 hours ago

Sale Sharks will go into the final weekend of the Gallagher Premiership season with a chance of claiming a home semi-final following a dominant 45-12 triumph over fellow title contenders Harlequins.

Alex Sanderson’s men produced an excellent display against the fourth-placed team to move up to second, level on points with Exeter.

Although the Chiefs could move back ahead of the Sharks when they play Northampton on Sunday, Exeter and Sale will clash at Sandy Park next week to decide who gets the all-important home game in the last four.

It was not quite as free-flowing from the home side in the second period, but Rohan Janse van Rensburg marked his return from injury with the Sharks’ fifth try.

Bevan Rodd and Jean-Luc du Preez completed their scoring late on, while the visitors did manage a second score through Will Edwards.

After securing their qualification with a victory over Bath last weekend, Quins decided to rest several of their top players for this clash.

Joe Marler, Alex Dombrandt, Danny Care and Marcus Smith all sat out this encounter but a side that showed 11 changes in all started superbly.

They signalled their intent early on by catching the hosts napping when a quick line-out and a wonderful break from Ben Tapuai moved the visitors into the opposition 22. 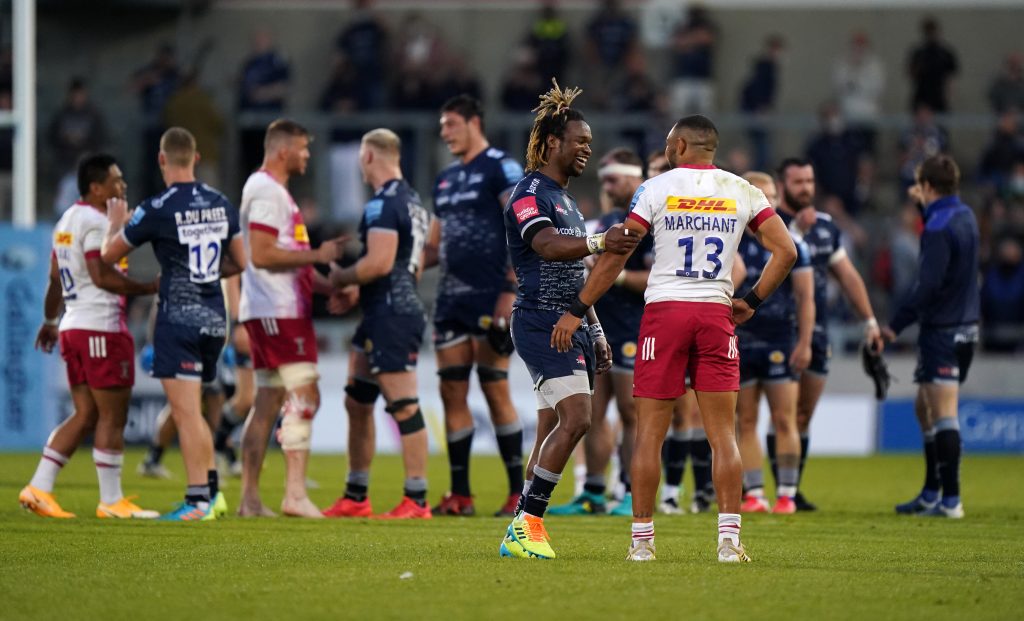 Although the Sharks’ defence recovered and halted the move, they were powerless to prevent Landajo touching down moments later.

Tyrone Green, who has been hugely impressive this season, was the instigator, making the initial break down the right-hand side before finding Stephan Lewies. The lock then showed excellent skills to draw the final defender and send the Argentinian scrum-half scampering over the line.

It was a shock to Sale but they responded well and proceeded to put Quins under pressure. The Londoners did not help themselves, conceding a string of needless penalties, but the Salford-based outfit were clinical in the opposition half. 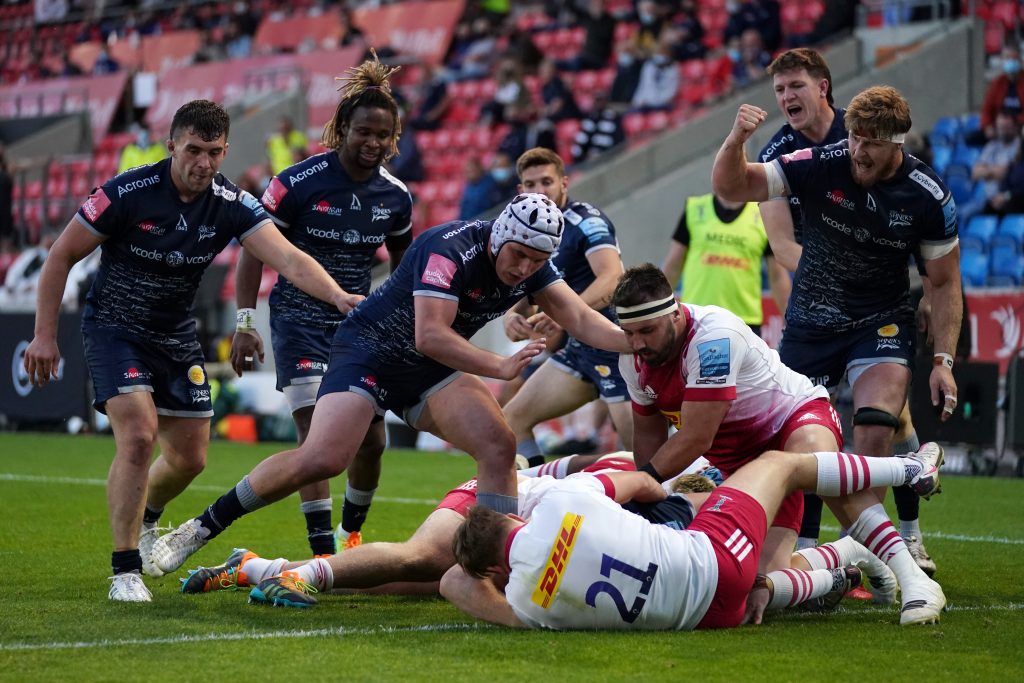 A run of 40 unanswered points started when a neat dummy and offload allowed Van der Merwe to cross the whitewash before excellent hands enabled Yarde to score against his former club.

Sale are renowned for their big runners but, although they did not make too many inroads through the middle in the opening half, it was still doing damage to Harlequins’ rearguard.

With Quins focused on the sheer power of the Sharks’ ball-carriers, the space opened out wide and Sanderson’s men soon had their third try. 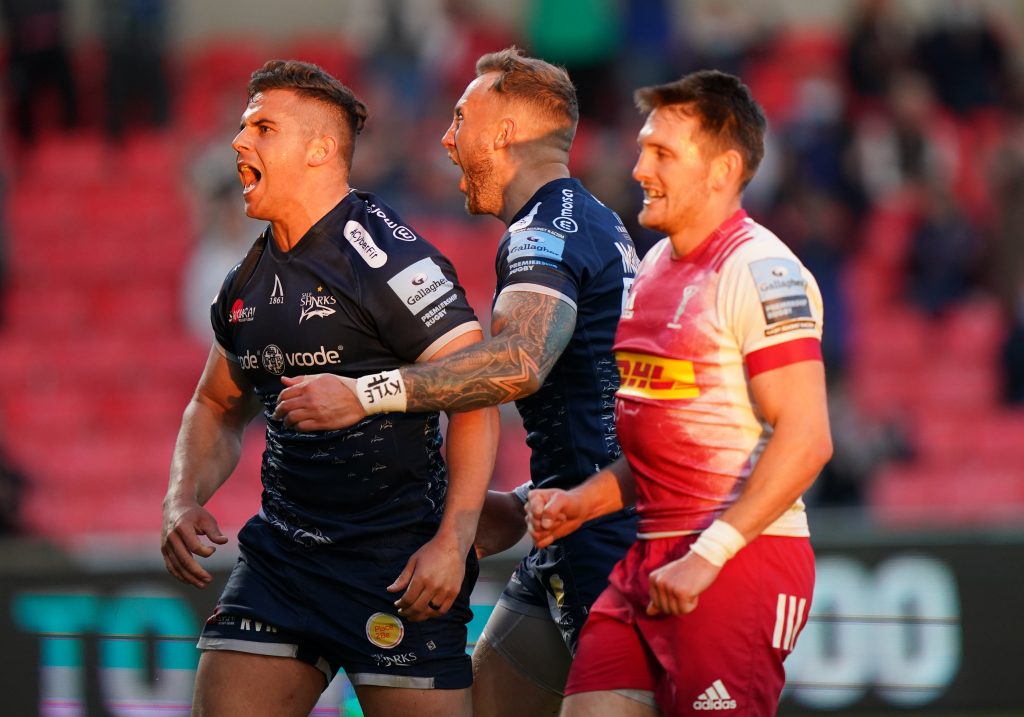 The forwards did the hard work by narrowing the defence before Sam James floated a wonderful pass for McGuigan to collect and score.

All Sale needed for an almost perfect half of rugby was the bonus point and it came when Neild powered over. This time, it was the direct approach which paid dividends as Van der Merwe and Ben Curry both carried hard before the blindside flanker touched down.

Quins, despite their attacking prowess in 2021, have struggled defensively and they failed to find a way of stopping the hosts.

Landajo tried to spark them into life after the turnaround as he made two searing breaks and they were also helped by a yellow card for Faf de Klerk, who was sin-binned for a no arms tackle. 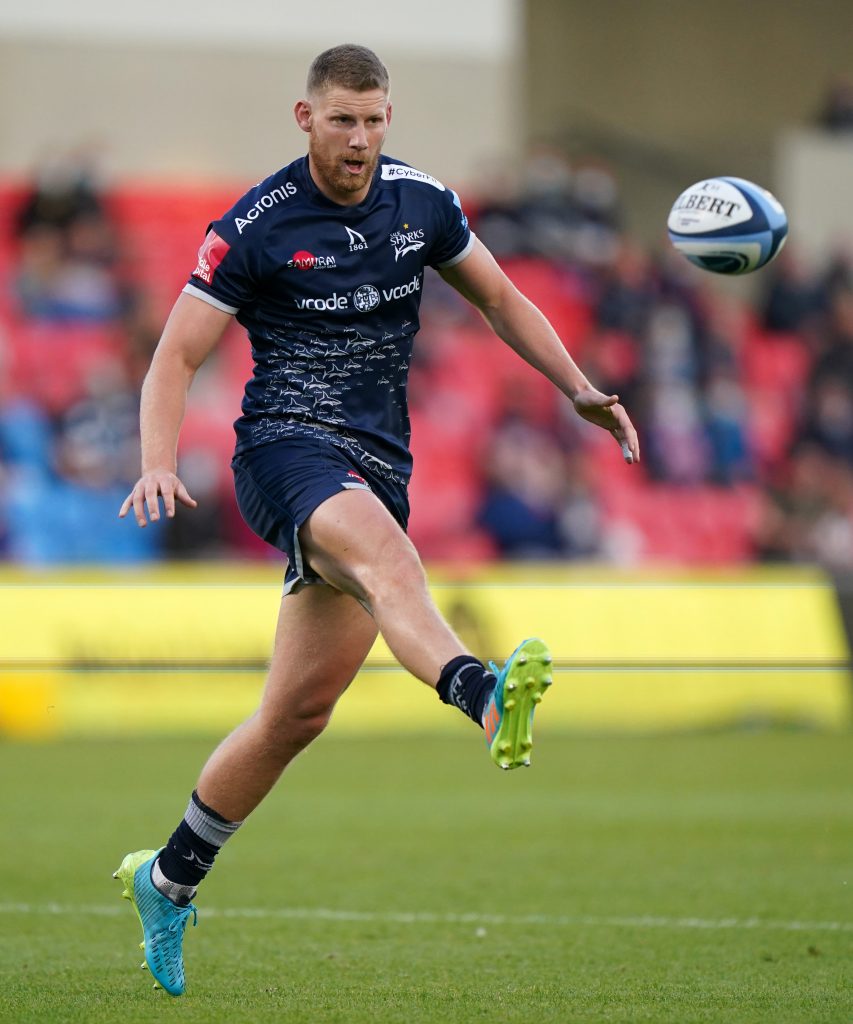 However, they did not breach the Sharks while De Klerk was off the field and instead it was the hosts that added to their lead when Janse van Rensburg touched down.

Rob du Preez took over kicking duties from AJ MacGinty, who had earlier scored three conversions, to add the extras and then took his side up to the 40-point mark after Rodd had touched down.

Harlequins kept going and were rewarded with an Edwards try but they will have to be content with an away game in the play-offs.

Fittingly, Sale that had the final word when Jean-Luc du Preez powered across the whitewash.