END_OF_DOCUMENT_TOKEN_TO_BE_REPLACED

END_OF_DOCUMENT_TOKEN_TO_BE_REPLACED
'That is not the game': Ex-Bok coach De Villiers calls out Erasmus' one-sided approach
S
Snash 4 hours ago

The British and Irish Lions received their toughest test of the tour to South Africa but still emerged overwhelming 71-31 winners as the Sharks fell away once Jaden Hendrikse was shown a red card for elbowing.

It was the workout Warren Gatland’s team needed after opening their expedition with three routine victories, including in the first meeting with the Sharks at Emirates Airline Park on Wednesday that ended in a 54-7 rout.

The side from Natal, deputising for the Bulls who fell victim to an outbreak of coronavirus, were a different proposition three days later in the new surroundings of Loftus Versfeld.

They were ruthless at punishing the abundance of mistakes committed by the Lions, conjuring dazzling tries in the blink of an eye and were rewarded with a 26-26 half-time score.

But they were also exposed too easily and they suffered a grave setback in the 45th minute when scrum-half Hendrikse was dismissed for a brainless elbow on Liam Williams as the Wales full-back lay on the floor.

The score was still tied when Hendrikse departed and inevitably the pendulum swung dramatically in the Lions’ favour, who piled on the points against opposition full of endeavour but organisationally poor.

The Lions were forced into making two late changes when Maro Itoje was ruled out because of a mild gastric bug and Finn Russell could not overcome an achilles injury, resulting in Courtney Lawes, Beirne and Bundee Aki coming into the 23.

Another easy win appeared on the cards when the tourists crossed in the fifth minute, passes from Anthony Watson and Williams launching an attack that was given momentum by Van Der Merwe’s footwork until Harris arrived to touch down.

An error by Daly was ruthlessly punished, however, as the Sharks pounced on his unforced knock-on and threaded the ball to full-back Anthony Volmink who had the gas to score. 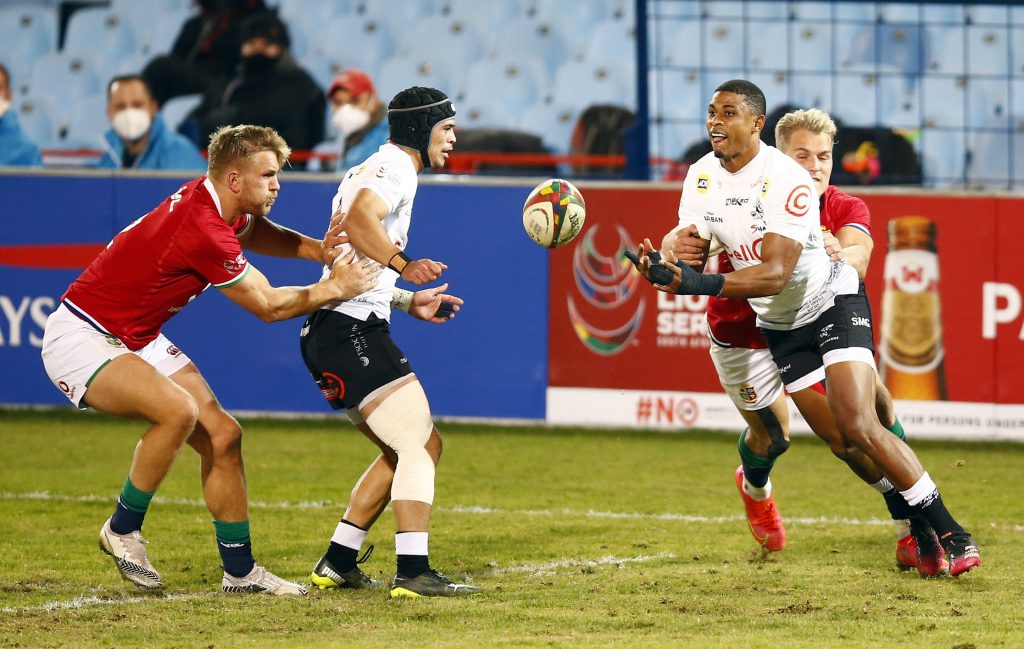 Despite the early setback of Harris’ try, the hosts were playing with greater conviction than in the first meeting and they seized the lead when two big carries made a dent before Lionel Cronje slid the ball behind the defence for Thaakir Abrahams to score.

The high-octane opening continued as George finished a line-out drive before Hendrikse picked off a poor pass by Gareth Davies to run in a long-range intercept.

Slick handling and poor Sharks structure allowed Van Der Merwe to stroll over in the 26th minute to tie the score 19-19, but the Lions knew they were in a game as South Africans attacked from all parts of the pitch. 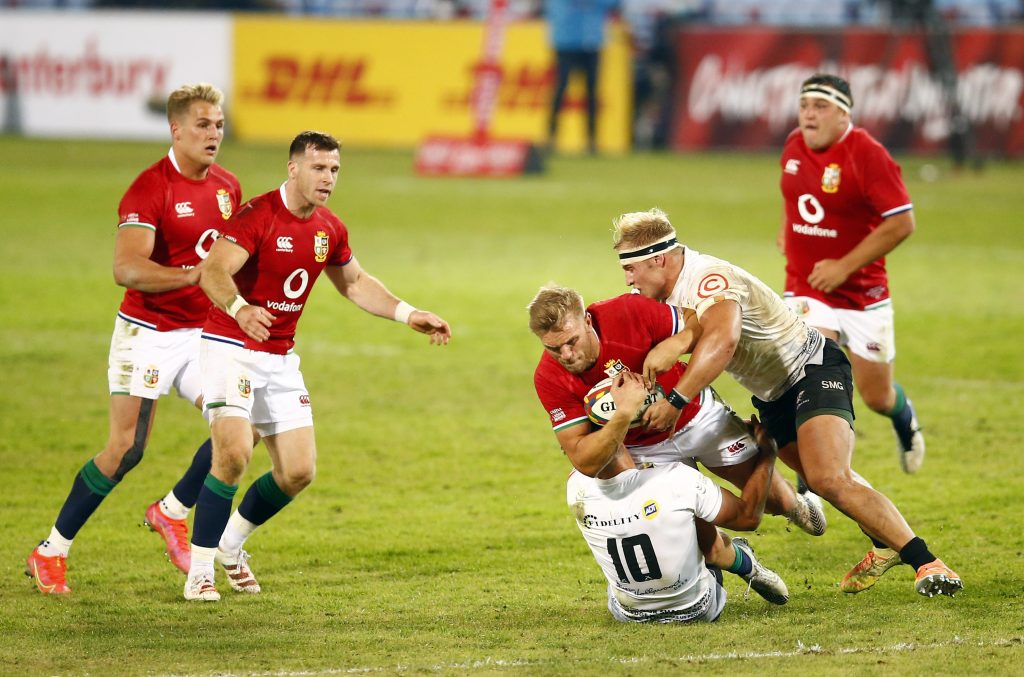 Once again an error was pounced upon as Van Der Merwe dropped an unkind pass by Dan Biggar and Thaakir Abrahams reacted in a flash, scooping up the ball and sucking in defenders for Hendrikse to score.

For all their brilliance at exploiting mistakes, their shaky foundations made them vulnerable and to underline the point Beirne picked up and charged over from close range for an easy try.

Disaster struck for the Sharks when Hendrikse was sent off for elbowing Williams on the floor and when Conan surged over the Lions were also back in front. 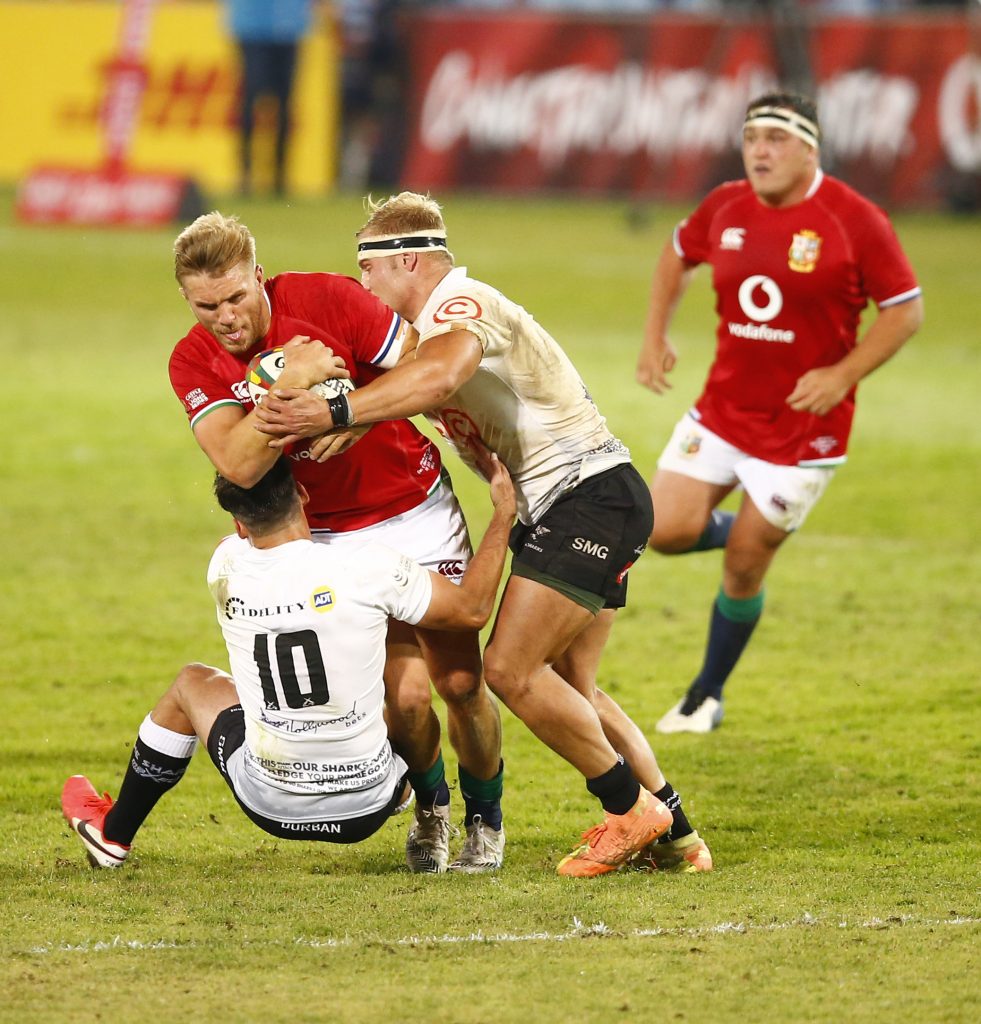 Daly picked a superb line to run on to Williams’ pass and score, but the Sharks would not go away as Werner Kok charged down Conor Murray’s clearance and was first to the ball.

Hamish Watson sent George over and then the procession began as Anthony Watson (2), Beirne and Tom Curry scored, although the end was marred by a yellow card shown to tour captain Murray for cynical play.