Is Leicester Tigers supremo still the best gig in English rugby? You bet it is

Is Leicester Tigers supremo still the best gig in English rugby? You bet it is

The 2018/19 Gallagher Premiership season is going from bad to worse for Leicester Tigers.

The latest roadblock that the East Midlands side have reached came on Saturday, as the 10-times champions of English rugby fell to a morale-sapping 52-20 loss at home to Exeter Chiefs.

If things weren’t grim enough at Welford Road, Tigers, who are now just five points off the bottom, have to make the trip up to Kingston Park on Friday night to play Newcastle Falcons, who are that bottom-placed side.

Falcons, who it should be noted, have won three of their last four Premiership games, with the only loss coming away at Saracens this past weekend, and even in that game they were unlucky not come away with any points.

Leicester aren’t just being talked up as relegation candidates because it’s a juicy story, given the lows that the club have fallen to after such consistent and sustained highs, but because it is becoming a very real possibility.

After that Newcastle game, which is the cliched “10-pointer” at the bottom, Tigers finish up at home to Bristol Bears, away to Harlequins and at home to Bath. You would suspect that that home encounter with Bristol has been circled just as frantically as the trip to Newcastle by the Leicester coaching staff, but there is no guarantee that the Tigers will pick up any more wins this season.

With that in mind, the next statement might come as a bit of a shock.

The Leicester Tigers director of rugby and/or head coach role is still the pinnacle of English club rugby. 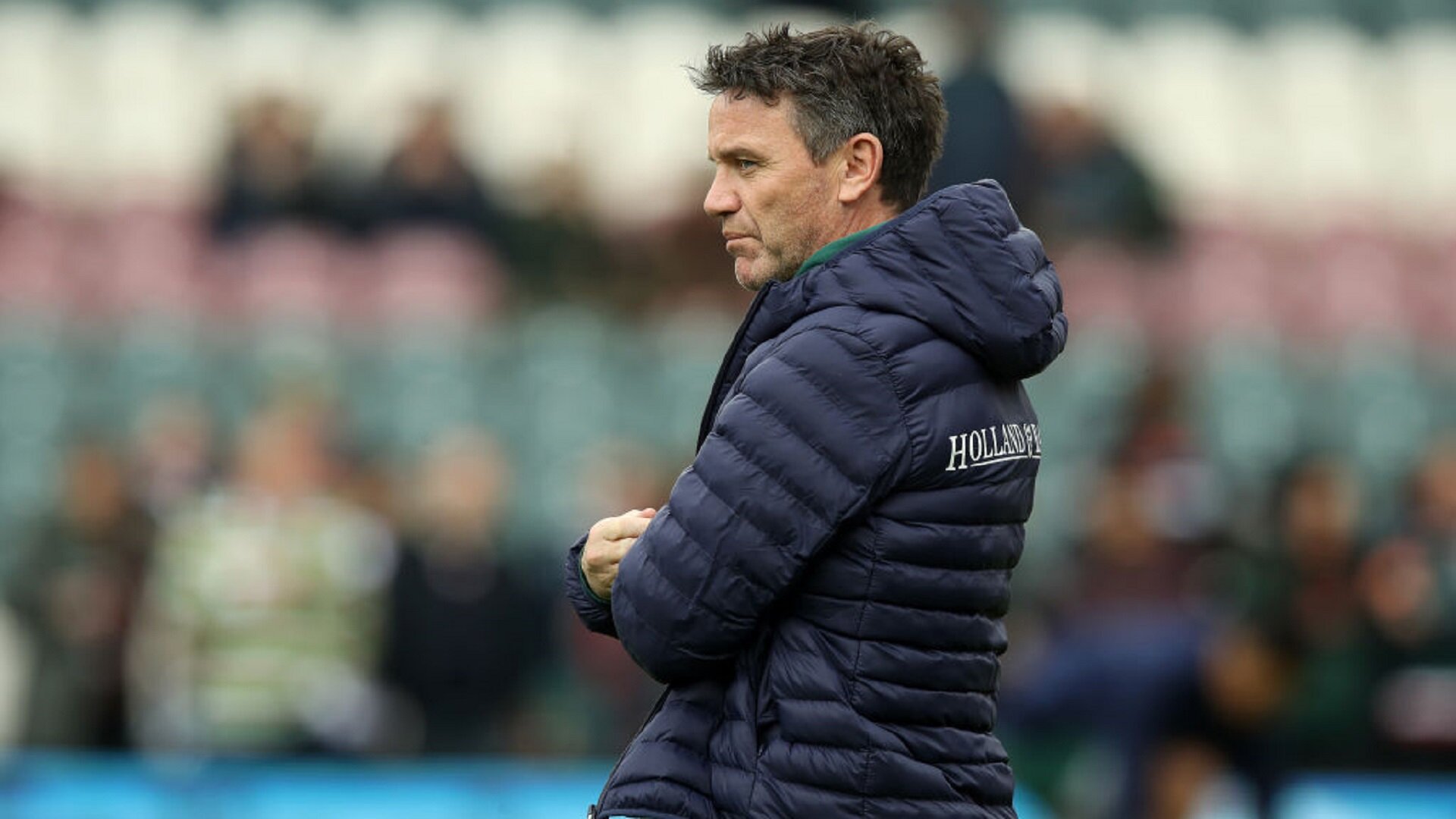 Could Mike Ford be eyeing up a long-term role at Welford Road? (Photo by David Rogers/Getty Images)

Given the coaching upheaval and uncertainty since Richard Cockerill was let go, and the diminishing returns of the club in the Premiership and European competition, why would anyone want this poison chalice?

It’s a bit of a buzz word in rugby. A lot of clubs and organisations say they are actively seeking to be sustainable, but few truly are at the moment. For Leicester, it’s an achievable short-to-medium-term goal.

Gone are the days Tigers can rule over English rugby because of their unparalleled support, as increased TV income and rich benefactors have levelled the field in the Premiership. That impressive support, however, should make it easier to balance the books.

How many other clubs can sell out a 25,000-seater stadium for regular season matches? They even managed to sell the place out for an Anglo-Welsh Cup game back in 2017, when they hosted arch-rivals Northampton Saints in the group stage.

Rugby’s finances are always in a state of flux. As much as we all don’t want to admit it, it’s a minority sport that cannot hope to compete with the riches on offer in football, basketball or American football, the latter of who’s forays into the English sporting market should not go unnoticed. All it takes is for a TV company to go under or pull out their support, or for an ownership willing to underwrite costs to leave, for a club to suddenly become untenable.

Throw into the mix the RFU’s current financial plight and there’s another source of income to the clubs that is looking far from secure in the coming years.

Despite posting a pre-tax loss during the last fiscal year of £991,000, the club also showed increased turnover as a result of healthy attendances and new sponsorship opportunities. Whether a worst-case scenario occurs, or the status quo remains and the goal is simply to operate more sustainably, Tigers are a in a good place to survive or thrive respectively.

One signing is not going to change the destiny of the club, but if it could, Jordan Taufua is not far off being that man.

By locking up the Crusader for next season, Tigers have instantly improved their back row. Whether Taufua plays with a carry-heavy focus in the unit, much as he did when he first broke through for the Crusaders, or a more balanced role, as he did when utilised alongside Kieran Read, Taufua will make Leicester a better team. He’ll need a decent offseason after Super Rugby and time to adjust to a new culture and environment, but as players go, he is one of, if not the most exciting signing heading to the Premiership next season.

Graham Kitchener, Mike Williams and Will Evans are all off for pastures new, as is Matt Toomua in the backs. Will Spencer was brought in this season to solidify the second row and Harry Wells has stepped up in the opportunities he has been given, and as previously mentioned, Taufua bolsters that back row. As for Toomua, it unfortunately hasn’t quite clicked for him since moving from the Brumbies. From the red card on debut to a season-ending injury upon his return, not to mention intermittent international duty with the Wallabies and Tigers rarely being able to provide the platform to their back line that was a given in the past, he just hasn’t been able to hit the heights we all know he is capable of.

There is plenty of quality still around at Welford Road, too. Dan Cole and Ellis Genge lock down the front row, whilst Facundo Gigena is severely underappreciated, and the pack is bossed about by one of the best in Ben Youngs. Jonny May, Manu Tuilagi and Telusa Veainu add class in the back line and then there is, of course, George Ford.

Ford right now has the feel of a one-way player on an NBA team in full rebuild mode. Ford is an attacking dynamo who can run the offence, knock down the three and beat his man on the iso and take the ball to the hoop. You put him on a good team and he’s the difference-maker that takes you from a playoff contender to a champion. What he’s probably not, though, is the two-way player who can be the foundation of a rebuild. He’s rugby’s answer to Carmelo Anthony.

Anthony will go down as a great NBA player, just as Ford is a great rugby player, but asking a player that is offensively-oriented to carry a rebuild is tough. If Tigers can put the pieces into place around him, though, Ford can spearhead Leicester’s charge back to the top.

If there is one thing Tigers do not lack for right now, it is candidates putting up their hands for further opportunities in the coming seasons.

Jordan Olowofela has flashed his potential this season, as well as some of the rough edges that you would expect of any younger player, whilst current England U20s Joe Heyes and Tom Hardwick have made noticeable impressions in their opportunities, too. Tommy Reffell, Sam Lewis and Ben White are also in the senior academy, as are first-year forwards Cameron Jordan and Henri Lavin, among others.

There’s talent in that group, the latter two of whom lifted the Premiership U18 title last season. Winning at U18 level does not necessarily correlate to success in the seniors, but there is definitely a wave of players coming through the pathway in Leicester that can give the club the injection of impetus that it desperately needs.

The U18 side backed up that 2018 title with another one this year, and the likes of Freddie Steward, James Whitcombe, George Martin, Jonny Law, Sam Costelow and Joe Browning should be among those contracted this year. Combined with last year’s class, there’s not only a foundation of a senior side there, there’s also affordable depth options within the senior squad over the next couple of seasons.

There’s more to come next year, too, with Emeka Ilione, Rob Hardwick and Lynx Noumey among the names to look out for, and the strides the Leicester junior academy has made in recent years help make the senior role at the club so appealing, as developing a productive pathway is not something that can be achieved overnight.

Finally, expectation in the East Midlands can be a killer for prospective coaches. Tigers fans have always expected the club to be the best in the country.

That’s what years of sustained success have done and if the club isn’t at that level, or at least close to it, then there is discontent.

That said, a lot of that expectation has evaporated during the club’s recent struggles. Wanting to be champions gave way to wanting to be a playoff team, which then paved the way to fans simply hoping to qualify for the Heineken Champions Cup. Now that the club is in a genuine relegation battle, the pressures on a new director of rugby or head coach will not be one of needing to immediately challenge the likes of Saracens and Exeter Chiefs, it will simply be one of making gradual and incremental improvements. 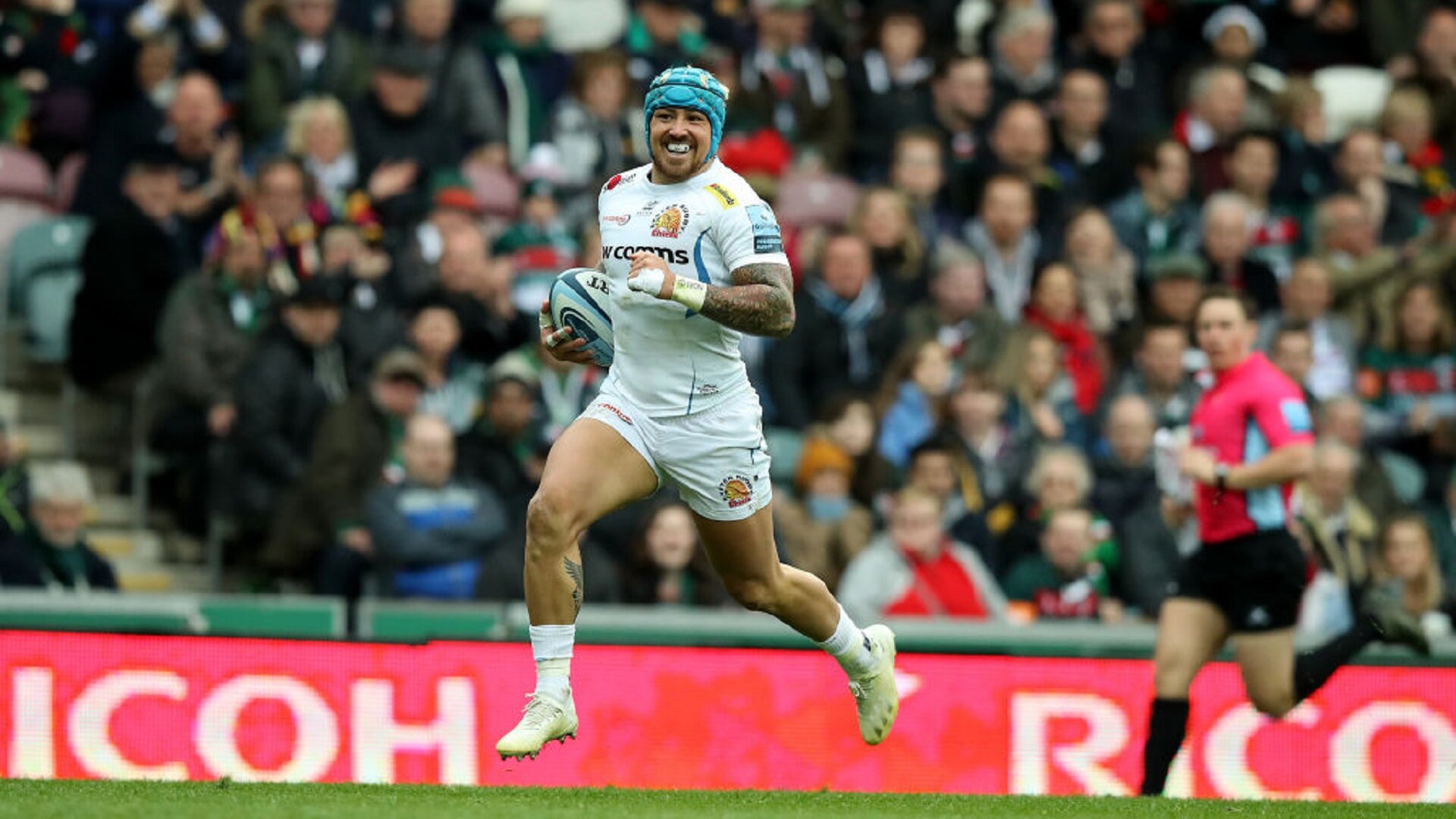 It was all smiles for Exeter Chiefs, as they ran rampant at Welford Road. (Photo by David Rogers/Getty Images)

Get them out of the bottom half and back into the Champions Cup – or get them promoted, should the worst happen – and fans will be exuberant. If you can show growth and improvement, you’ll have their support, and without that need for instant success, the club and its squad can be developed organically, without needing to cut corners or attempting to fast-track the process.

The opportunity to bring back prestige to this club is one that plenty of coaches or directors of rugby would relish.

The club has a productive academy capable of progressing players through to be important components in the senior team.

It has a senior squad which has talent and whilst certain areas need strengthening, it is not deficient, relative to the teams around the club in the table.

There is the support, infrastructure and financial promise to be able to sustainably run a club that can be competitive with the best sides in Europe.

Although Leicester’s star has diminished of late, if you put all these factors together, it’s still the most appetising job in English rugby for the person with the right ambition, philosophy and vision to take it on.

On an unrelated note, has anyone got Ben Ryan’s number?