Analysis: Will the Blues' backs ever get the ball?

The Blues 24-22 loss at the hands of the Crusaders was promising and heartbreaking at the same time. The Blues were dominant at times and had the Crusaders there for the taking multiple times, but failed to capitalise making this a hard pill to swallow given they had the chance to take down the defending champions.

What did we see from the Blues for the first time under new head coach Leon Macdonald, and where are the improvement areas for the side?

After having only three points to show from two early entries into the Crusaders’ 22, the Blues quickly conceded the first try of the match on the back of compounding mistakes.

Defending on halfway, the Blues conceded a line break that was more about disjointed defence than anything special the Crusaders did. 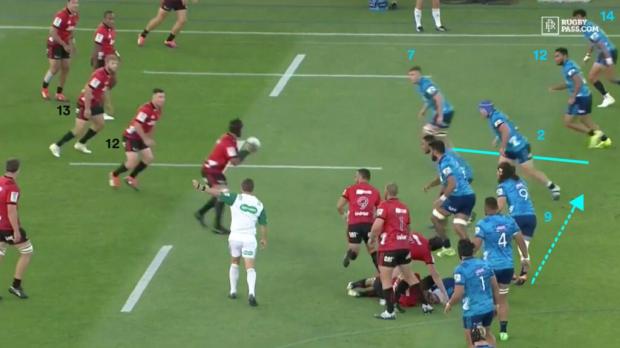 The Crusaders have a five-on-four advantage down this left side, with the only free man being George Bridge (circled) on the touchline.

With Jonathan Ruru (9) playing sweeper, a passive up-and-out defence can push this ball to the sideline and shut this down without having to do anything special but see each pass go wider without committing any defenders. Dalton Papalii (7) is bringing more line speed than any of his teammates with alignment on Braydon Ennor (13), however, he changes his angle in search of a dominant tackle on Ryan Crotty (12), who just lets the ball fly across his face. 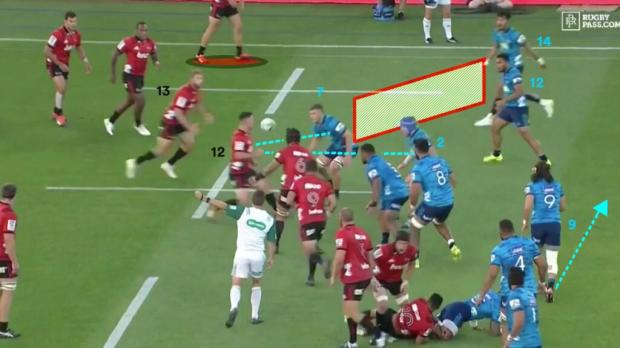 There is no need for Papalii to jam in, and it allows Ennor to burst through the line in the vacant hole left behind. The young Blues flanker’s over-eagerness to put a shot on illustrates how the Blues don’t always sing from the same song sheet, and perhaps shows a lack of communication on this occasion.

The lesson for Papalii is understanding situational defence and leverage, knowing when and when not to rush, and how to play non-committal coverage to keep your line intact and reduce the numbers advantage. He might have a license to rush and bring pressure from anywhere, but the decision to take a man already covered wasn’t wise.

The Blues do scramble and force a knock-on in the tackle, winning a scrum on their own 10-metre line. From there, Ruru’s exit kick is charged down and the Crusaders win an attacking scrum in prime real estate. Here are both second rows before the charge down. Both have the same job of getting up from the scrum. The Crusaders pair is there ready to bring pressure but only one Blues lock, Josh Goodhue (5), is positioned ready to shield.

The Crusaders just work harder at the little things off the ball to create opportunities and Quinten Strange (5) is able to charge unobstructed and win possession.

The last Blues blunder is Michael Collins’ dropped ball on the cross-kick from the resulting scrum which gifts Crusaders winger Manasa Mataele five points. A slew of mental and execution errors compounding ended in five Crusaders points when the Blues had all the control.

For all the talent the Blues have at their disposal, this was almost 8-man rugby for 80-minutes.

Leon Macdonald’s transformation of the Blues won’t happen overnight and against the Crusaders they played pretty conservatively but were plagued by execution and pressure in the red zone in the first half.

The Blues had five entries with possession into the Crusaders’ 22 in the first half and only came away with three points, a measly return of 0.6 points per entry.

Almost every entry was characterised by carries, carries and more carries. The pack tried to bully their way over and were limited, with the likes of Matt Todd and Scott Barrett attacking the breakdown and the ball carrier and winning crucial turnovers.

In the second half, they tried more of the same and were able to change their fortunes, scoring three tries from five 22-visits for a return of 3.8 points per entry.

A dominant second half doesn’t make up for a poor first one, but the Blues did push the Crusaders all the way in the game. In these tight games, clinical details matter and all the little moments make the difference. A full-80 minute performance is required to beat the Crusaders.

Rieko Ioane’s 12-metres on four carries is criminal underuse of one of the game’s premier attacking weapons.

Having an 8 that likes to carry and a 9 that likes to run is bad news for the backs. A massive 60 percent of the Blues’ scrum plays inside the Crusaders’ half were carries off the back for Akira Ioane.

His younger brother had just two designed plays off set-piece, carrying down the 10 channel twice, and got the ball just once on his left flank in the game.

From 17 attacking set-piece opportunities in the opposition half, the Blues attacked wide just once on the first phase. There weren’t many setups for second or third phase stings either, instead, using the forwards around the corner continuously.

The Blues’ shape in the middle third has changed under Leon Macdonald. They have adopted Tasman’s 5-3 forward split to set up a large open side with a central two-man pod and a midfielder out the back, but this was only visible briefly as there wasn’t much continuity in phase play in this area of the field. 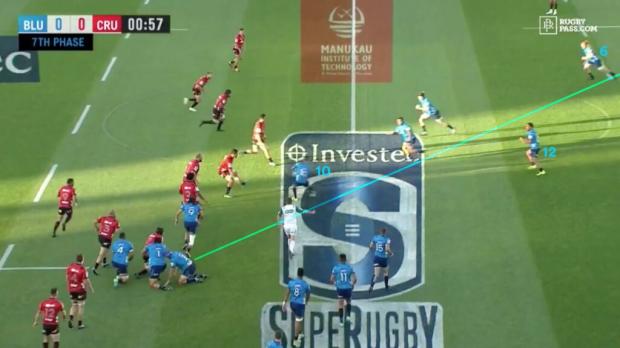 This is generally going to be the ‘backs playground’, with a license to play with some width and work to open up the opposition, but when they did have possession there, we saw the depth issues that plagued the Blues last year, with extremely deep outsides that aren’t bringing any pace onto it.

The first visible sign of Macdonald’s genius play-designs was a halfback-wrap out of a kick formation in the second half, using the 10 from a deep kicking option as an inside option of the runner. The Blues setup for a clearing kick from Harry Plummer (22), but Ruru (9) feeds Tom Robinson (6) and performs a wrap around, pulling some the Crusaders’ interior defenders wider. 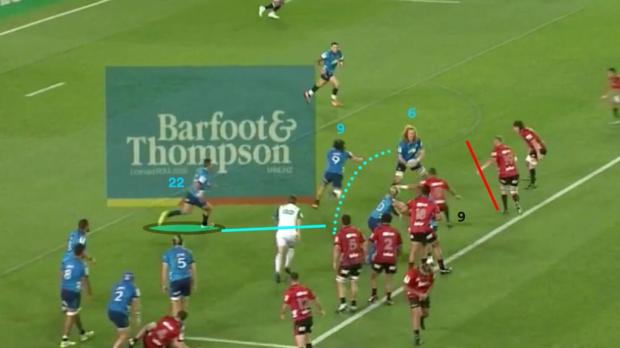 Ruru’s line pulls Luke Romano (19) wider, while Bryn Hall (9) identifies Plummer and points him out. With Romano pushing wider, Robinson takes the one-on-one matchup with Hall and pokes through before getting an offload away to Plummer at pace who streaks away downfield.

If the Blues want to ignite their backs more often, the balance of the side might be better suited having Sam Nock starting at halfback and someone like Jordan Trainor at fullback. The most experienced 10 on the roster at Super Rugby level, Stephen Perofeta, was not in the matchday-23.

Last year Perofeta proved to be a dangerous running and ball-playing threat capable of playing direct and unlocking defensive lines, something that Otere Black didn’t do yesterday in his 52-minute performance.

They physically matched and bettered the Crusaders, but were outsmarted and outplayed by small margins. It wasn’t the prettiest game by the Blues but ultimately they did have the chance to win and fought to the end, proving they will be a much tougher ask to overcome than last year.