Scotland’s captain Stuart Hogg has long been a star of the international game, breaking off mesmerizing runs, beating defenders with dazzling footwork and scoring tries that few in world rugby can.

This year’s Six Nations campaign has seen Hogg continue his evolution as a player, transitioning from a player that performs feats of brilliance himself to a playmaker that creates opportunities for the teammates around him.

Despite two publicized blunders, more than ever before he is playing a mature hand in Scotland’s game plan, not just having to be the special weapon that searches for home runs on every touch of the ball.

In the early rounds of last year’s campaign, Scotland’s attack was hampered by lateral ball runners and, at times, an overeagerness to make defenders miss one-on-one tackles.

In the above example, Scotland had Ireland compromised with a numbers disadvantage but couldn’t capitalise, as Ireland used a jockey/slide defence to choke Scotland out to the sideline.

A lack of direct running and non-committal passing by Scotland failed to use this overlap, with Hogg himself crabbing across into Huw Jones’ path and taking away space from the outside men.

This contrasted with the opening stages in Dublin this year, when Scotland started with a 5-minute barrage of possession that almost knocked down Ireland’s door.

It was noticeable just how direct the attack was, with far more impetus on engaging defenders into contact and straight running lines.

On Hogg’s second touch of the game, he plays a calm hand drawing Gary Ringrose into contact and preserving the outside space.

After a slight bounce to the outside of Josh van der Flier, he straightens his angle and gives himself up to commit the Irish centre. This play was that of a ball-playing fullback, able to use the threat posed by himself to selflessly open up space for others.

The red zone issues persisted, however, as Scotland were turned over deep inside the Irish 22 multiple times but, with a more direct attack, they weren’t short of opportunities.

Another simple touch from Hogg creates a try-scoring opportunity early in the second half.

Holding the defence from sliding, Hogg’s direct line coupled with a double pump of the ball gives a ton a space for Huw Jones. If not for a heads up play by Jordan Larmour to stamp out this break, Scotland would have waltzed over.

The Adam Hastings-Stuart Hogg tandem has really flourished with the once Glasgow Warriors teammates complementing one another well, without stepping on each other’s toes.

The one-two punch has delivered results as one player steps in to build on the other’s work. Both are capable of directing the play and getting the ball where it needs to be at the opportune time. Late in the first half against France, Adam Hastings (10) takes on some disjointed French defence and weaves his way into the 22. 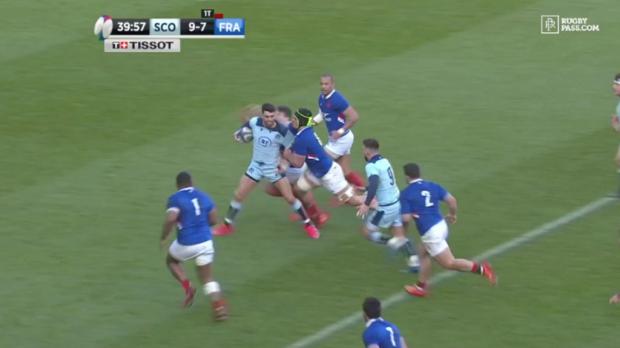 Hogg (15) originally looked for a support line, but then took over proceedings at first receiver on the next phase. 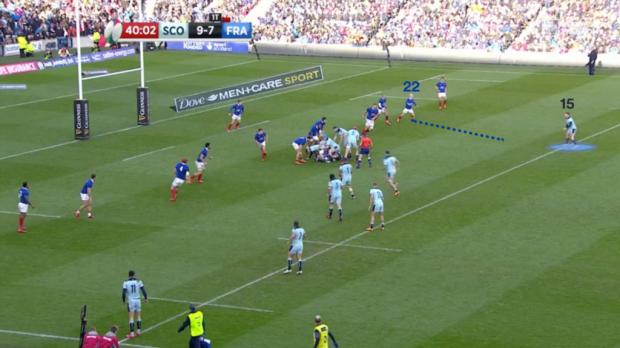 The rookie French replacement Matthieu Jalibert (22), subbed on early for Romain Ntamack, flies out of the line putting Hogg under pressure but also granting him an opportunity.

Hogg doesn’t overplay the situation, immediately pivoting to get the ball to space and finding Sam Johnson (12) rushing into a yawning hole. 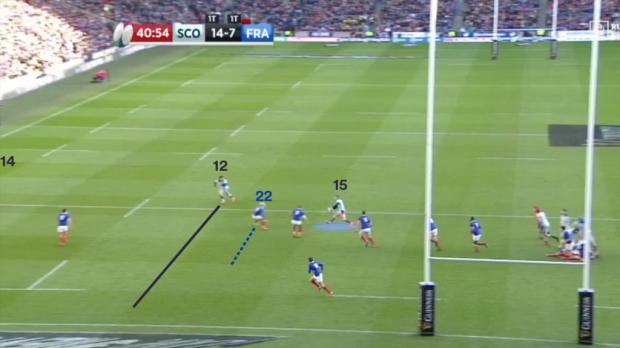 Johnson links with Sean Maitland to send the winger over untouched in the corner. Adam Hastings started the momentum and Stuart Hogg stepped up to deliver the final blow.

Scotland has been at their best under Gregor Townsend when they move quickly after making an initial puncture.

When they are playing badly, they often fail to keep the pressure on after making a line break, either by slowing down the play or resorting to carrying and squandering the chance to attack a punctured defensive line.

Having two directors of play to pull the strings has enabled Scotland to take those moments and find the space where necessary.

In the second half against France, it was Hastings returning the favour to capitalise on Hogg’s initial work. So much of Scotland’s counter game in the past has revolved around giving Hogg carries from kick returns, getting the danger man the ball and seeing if he could conjure up some magic.

In this Six Nations, Scotland has been more diverse, looking to play whatever the best option is.

On this occasion, Maitland spreads the ball to Hogg in order to attack the opposite side.

Hogg knows if he can utilise some shielding and get on the outside of Paul Willemse, Scotland will have a 3-on-2 down the left edge. 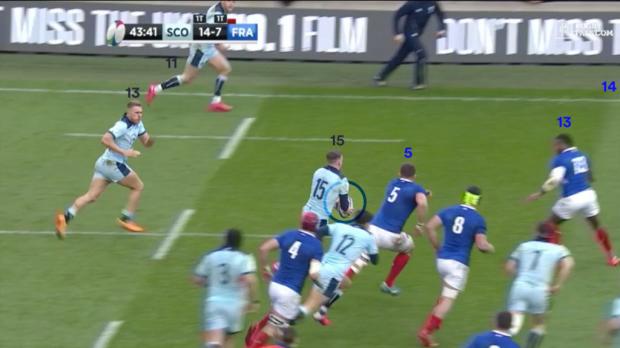 Hogg is again willing to give himself up to free up his outside men. He has all options available with the ball out in two hands, able to play any one of them as late as possible.

He flirts with Virimi Vakatawa (13) and gets him to bite just as the ball is moved on to Chris Harris (13). With Damian Penaud (14) pushing out to take the winger, Hogg’s work has manufactured a matchup for Harris on the trailing lock Paul Willemse (5), a speed mismatch for the Scottish centre. Willemse is unable to catch him, and again the rookie Jalibert ends up making a bad read, over-eager to close from the backfield on the winger that Penaud already had covered, allowing Scotland to break away and breach Les Bleus’ 22. This time it is Hastings stepping up to organise proceedings and make use of the fractured defence.

Scotland almost blows it by failing to get the ball wide straight away, much to the visible frustration of Sean Maitland (14). This gave France more time to reset, but we see Hastings take ownership and he organises Scotland into a formation to run a set play using some ball-playing from Jamie Ritchie (6). They set up a screen pass play to free up Hastings on the outside.

Fraser Brown (2) is used as a decoy runner to hold French lock Bernard le Roux (4), the second-to-last French defender on that edge, while Hastings gets a well-timed pullback pass from Jamie Ritchie (6). 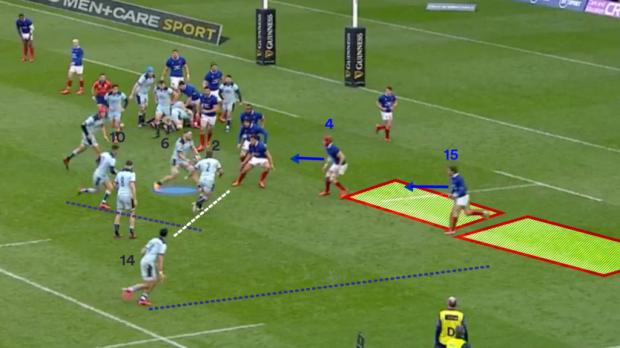 The French fullback, Anthony Bouthier (15), is caught in no man’s land, allowing Hastings to fire the pass to a wide-open Sean Maitland. The entire passage of play is classy work from both Stuart Hogg and Adam Hastings.

It shows how quickly a try can be manufactured when you have two ball-playing options at 10 and 15, especially if they are able to constructively work in tandem.

Hogg created the initial break using his outside backs and then Hastings steps up to the plate to quickly organise the side and fire another accurate pass to the open man, a direct role reversal of Maitland’s first try.

It is hard to see how Finn Russell could get back into the starting side now with how mature Hastings’ performances have been. Looking longer-term out to 2023, Hastings is the guy to keep moving forward with, no matter how good Russell can be.

This is a promising scenario for a Scotland side looking to re-find their mojo following the World Cup pool exit.

In this year’s Six Nations, they showed they are figuring out how to unlock sides with faster ball movement, building a much more efficient attack around straight-line running and two ball-playing options.

What’s more, as the tournament progressed they started executing the kill shot with more accuracy when the windows did open, without pushing 50-50 balls but playing with controlled tempo.

On the other side of the ball, Scotland’s defence was giving up nothing, conceding an average of one try per game and around 12 points. They were more aggressive, mobile and scrappy at the breakdown and despite not delivering dominants hits, they could frustrate any side to no end.

With their team built for speed, they have to keep moving towards this kind of expansive game when every other side is skewed towards power-based rugby.

While Wales are also trying to transition their game style under Pivac, Scotland at this stage looks significantly more comfortable.

This squad has the makings of a side that can end the Six Nations drought, with the right schedule, and a bit of luck without injury. That should give hope to any Scotland fan.