Heading into the sheds with a 14-point deficit hanging over their heads, Colin Cooper’s Chiefs side looked to be down and out.

It wasn’t the first time they had been faced with adversity this season. The Hamilton franchise have been hit with too many hurdles to count in the early stages, and this was just another they would have to find a way to get over.

The Chiefs rallied in the second spell and didn’t surrender another point to the visiting Bulls as they put up 27 points of their own to complete a spirited, gritty comeback. It’s that same grit and refusal to lie down that is keeping the Chiefs alive in 2018.

After losing 100 All Black caps worth of experience and their head coach over the off-season, the Chiefs looked certain to take a big step backwards. New man in charge Colin Cooper quickly orchestrated a near complete backline reshuffle with plans to spearhead the attack through livewire Damian McKenzie in the No. 10 jersey, while the forward pack looked set to remain among the premium crops in the competition. Maybe the step back wouldn’t be as gaping as first thought.

Then the side were hit by the injury bug. Hard.

As of week five, Aidan Ross – a 22-year-old who made just five appearances last year – is the only remaining prop from the original 38-man squad. Utility back Tim Nanai-Williams has played his last game for the franchise after going down with a season-ending shoulder injury. Dominic Bird is battling a shoulder injury of his own, Charlie Ngatai is dealing with a bad knee, Nepo Laulala will be nursing a fractured forearm until the tail end of the season, and that’s only scratching the surface of the Chiefs’ injury list.

Several Chiefs players – some not even contracted at the start of the year – have been left with no choice but to embrace bigger roles as they face a huge character test in the coming weeks.

Before the Chiefs’ week three clash against the Blues, an injury suffered by Shaun Stevenson during warm-up thrust 20-year-old Tiaan Falcon into the starting side for his first Super Rugby appearance, where he has since remained.

The young Hawkes Bay product has been forced to grow up quickly in the No. 10 jersey. A cool head thus far, Falcon has shown good ability under pressure, and proved to be handy with the boot, carving off 30 metres every time he kicks downfield. A well-placed grubber near the try line put enough pressure on the Bulls to set up the Chiefs’ first score on Friday night.

Colin Cooper has put plenty of faith in his former Taranaki charges, bringing in several players he found domestic success with as a Mitre 10 Cup champion, Ranfurly Shield holder and four-time competition semi-finalist.

Sean Wainui, unwanted by the Crusaders, has appeared in all three Chiefs fixtures and started two consecutive games on the right wing after being called in as injury cover.

The 23-year-old’s defence leaves something to be desired, but he’s been good for a line break every game, ranks fifth in the team in run metres, scored a try against the Blues and logged an 80-minute shift against the Bulls in the absence of Shaun Stevenson and Tim Nanai-Williams. He has since been rewarded with a full-time contract.

After the loss of All Black props Nepo Laulala, Atu Moli and Kane Hames along with Mitchell Graham and Sefo Kautai, former Waratah and Taranaki prop Ta’avao has stepped into a starting role at tighthead.

The former New Zealand U20 representative has played in every Chiefs fixture and is the only prop to play a full 80 minutes this season, after not being named in a Super Rugby squad to start the year. Yet to miss a tackle, Ta’avao has had no problem making others miss, bumping off a pair of defenders down the right edge to spark the Chiefs’ first try against the Bulls. 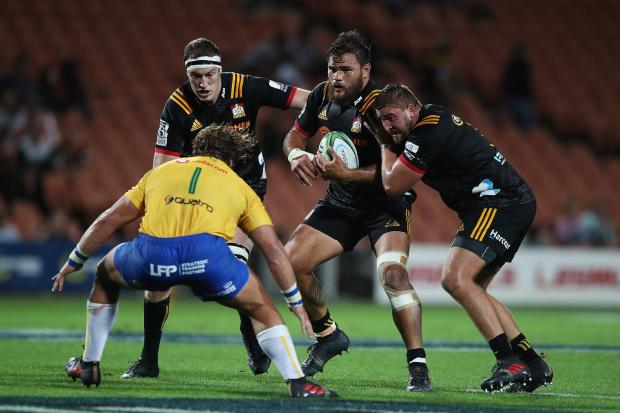 After being hit with so many injuries, it would have been easy for the Chiefs to just roll over, but instead they have taken the challenge head on.

Embracing a “next man up” mentality and showing an incredible amount of adaptability is keeping the Chiefs afloat as they prepare for a tough stretch over the next few weeks.

They head to Japan next week to play the Sunwolves before three consecutive New Zealand derbies against the Blues (home), Highlanders (home) and Hurricanes (away), where their standing in the competition will be put to the test.

If their early efforts are anything to go by, you can bet that they aren’t going to lie down.