Billy Burns’ miscued kick at the death in Cardiff has reignited a debate which has been rumbling on for some time in Ireland. When Johnny’s away, who should play?

The conversation around Ireland’s succession planning at out-half focuses on two points. First of all, the players currently providing the competition to Johnny Sexton for the Ireland No 10 shirt have not looked at the required level for Test rugby. The other issue is that the next generation, the players aiming to be part of the picture at the 2023 World Cup, are not yet getting opportunities.

First of all let’s focus on the issues surrounding those currently in the camp.

Sexton is still Ireland’s first-choice out-half, and by some distance. He is not playing to the heights of old, but at no stage has his position looked under any serious threat. He started every one of Ireland’s Six Nations fixtures over the last three seasons, and was the obvious choice heading into the current championship. If he doesn’t play the full 80, the game is usually in the final 10 minutes when he exits the scene. The fight taking place behind him tends to be for a spot on the bench, rather than the first 15.

At the moment the two challengers are Ulster’s Billy Burns, who got the nod for Cardiff, and Leinster team-mate Ross Byrne.

Billy Burns is not a bad rugby player and his overcooked kick is not what lost Ireland the game yesterday, but there is no hiding from the fact he got his key decisions wrong, including a poorly-executed cross-field kick which Jordan Larmour had little chance of rescuing.

That Burns was brought into the Irish system from England, joining Ulster from Gloucester in 2018, only heightens the scrutiny on his game. The former England U18 and U20 international has found himself higher up the queue than a number of ‘home-grown’ out-halves, which brings with it an added pressure to prove his worth. He had some bright moments in the Autumn Nations Cup, but Sunday was a real setback.

Next in line is Ross Byrne, who has never been able to bring his fine form with Leinster on to the international stage. He may feel he has been dealt a cruel hand, with his only two starts for Ireland both coming in Twickenham. He is still only 25, but has yet to suggest he could be Ireland’s starting 10 come France 2023.

Sexton will be 38 by the time that tournament rolls around, and once you move past him Ireland can point to very little Test level experience among the out-halves. Sunday’s game against Wales was Burns’ fourth cap. For all his exploits with Leinster, Ross Byrne has only been capped 11 times. Jack Carty gave a timely reminder of his abilities as Connacht beat Leinster last month, but won the last of his 10 caps at the 2019 World Cup.

Ireland’s depth in the position has also been impacted by Joey Carbery’s long-term injury issues. The Munster out-half hasn’t played any rugby in over 12 months, with a mixture of ankle and wrist injuries keeping him sidelined. Before the 2019 World Cup he had looked the obvious successor to Sexton as Ireland’s No 10. Paddy Jackson was also a regular member of Ireland squads and had been capped 25 times before a high profile court case led to him leaving Ulster in 2018. He is now playing regularly, and playing well, with London Irish, but remains firmly out of the international picture. 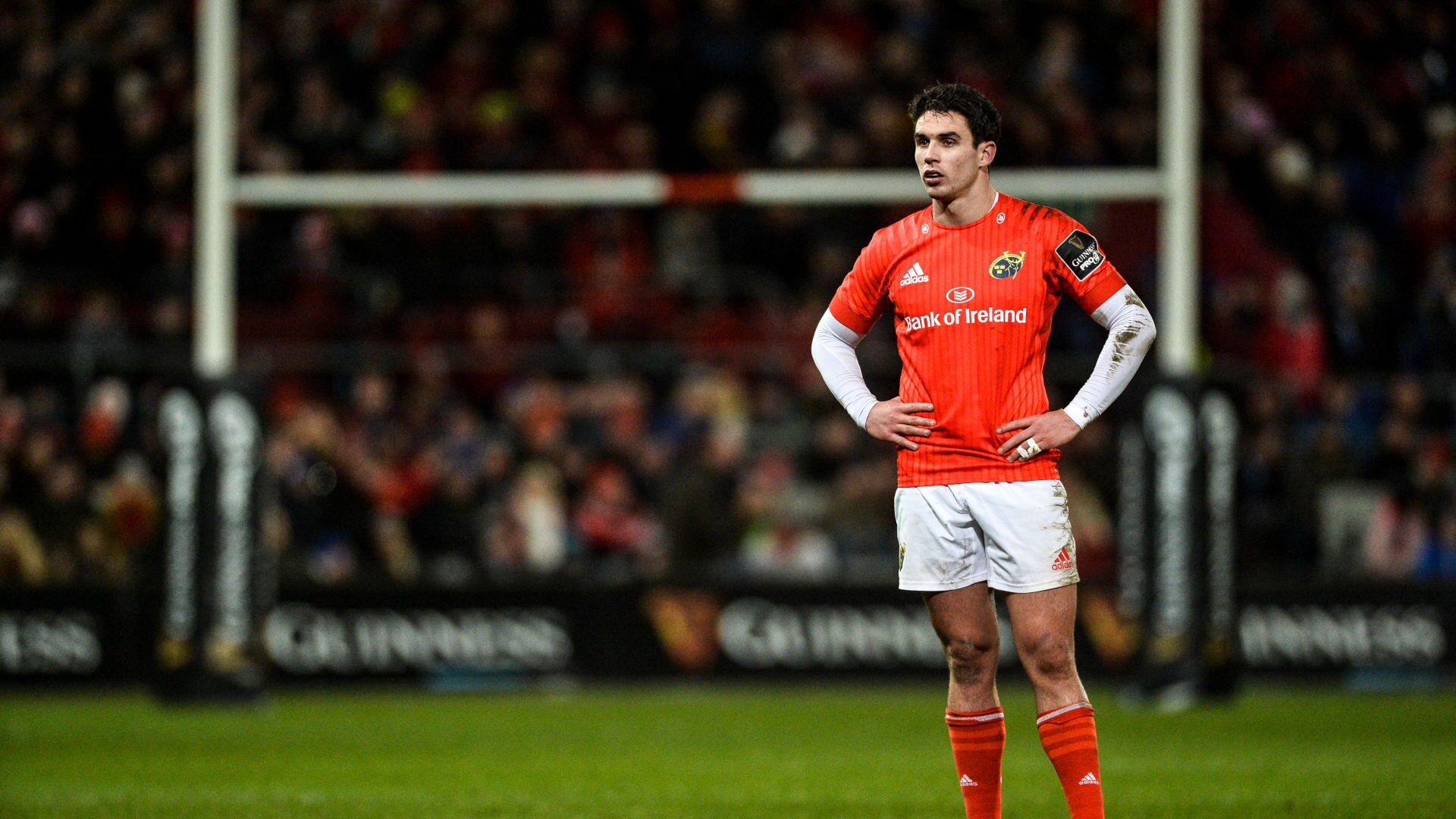 Burns, Byrne and Carty are all fine provincial players and have had their moments in the green jersey, but the fact that all three have failed to convince has seen the out-half succession conversation turn its focus to the next generation.

Here, the two stand-out candidates are Leinster’s Harry Byrne and Munster’s Ben Healy. Ciarán Frawley is also a hugely exciting prospect but has primarily been used at 12 by Leinster this season, while Ronan O’Gara has seen enough in 21-year-old Jack Crowley that he tried lure him from Munster to La Rochelle.

Healy has also been linked with a move away from Thomond Park, but looks set to stay now that Glasgow have signed Duncan Weir. He is still on an Academy contract but has looked comfortable at senior level this season, making five starts for Munster.

His potential is clear, but for now the spotlight is on Leinster star Harry Byrne. Leinster supporters have been aware of Byrne for some time, but his progression into the Leinster Pro14 team at the start of this season showcased his talents to a wider audience.

Younger brother of Ross, Harry was a stand-out player for Ireland at U20 level and made his Leinster debut in September 2019. In recent months he has been one of their most impressive performers in the Pro14, playing a central role as the province stormed to the top of Conference A with seven successive bonus point wins. Those displays put him in line to win a first Champions Cup start against Northampton Saints in December, but he had to pull out shortly before kick-off following a back injury.

That setback was unfortunately timed in what has been a breakthrough season for the younger Byrne brother, and he’s already pieced together an impressive highlights reel. There was the drive and offload to set-up a Jimmy O’Brien try at Glasgow, the chip-through to set up Michael Silvester against Zebre, or any number of link-ups with Frawley in a 40-point thrashing of Edinburgh.

Byrne provides the sort of X-factor which previously made Carbery such an exciting addition to the Ireland squad. Like his brother, Harry has a strong cross-field kick in his arsenal, but is more likely to run with ball in hand and take on defences himself. He has shown a capacity for brave decision making, superb handling skills and that priceless ability to make something out of nothing thanks to a quick mind and even quicker feet.

Many of Byrne’s outings have come alongside Leinster scrum-half Luke McGrath, who was asked about Byrne’s qualities earlier this season.

“He just plays so flat, he has such an attacking mindset which is great to play with,” McGrath said. “He’s constantly talking, giving you good communication throughout the game. He’s a brilliant player and he’s just getting better and better, he had a great run of games and I’m sure he’ll be picked up by Ireland soon enough.”

Wing Dave Kearney is another who has had a front-row seat. “He’s a class footballer, he’s got really great skills,” Kearney said. “He’s not afraid to talk, can control a game, good athlete, very similar to the way Ross plays really. I have no doubt that Harry will be playing for Ireland at some stage.”

So far Andy Farrell has resisted the temptation. The Ireland head coach clearly sees Byrne as a player with massive potential. He has been involved with Ireland squads as a ‘development player’ previously and was left out of the squad for the Autumn Nations Cup in a bid to build up his game-time with Leinster. At the time, it seemed fairly logical thinking. The growing clamour to get him into the Ireland camp now is based on the way he plays the game, with the attacking spark he has shown looking exactly like what Ireland need when they’re struggling to break down defences.

Unfortunately for Billy Burns, and by extension Ross Byrne, yesterday’s display in Cardiff has only heightened calls to get Byrne into the international set-up.

Speaking on Off the Ball this morning, another former Ireland international, Alan Quinlan, also said he would love to see the younger Byrne brother get a call-up in the coming weeks.

“He has that little bit of X-factor, that confidence and that natural athleticism as well that you want, he’s a big guy,” Quinlan said. “I think that’s what he would bring to the team and unless we try him then we won’t know.”

It is not yet clear how Farrell will manage his out-half options going forward. Sexton suffered a head injury against Wales which leaves him as a doubt for Sunday’s home game against France. If passed fit, he will start. On the bench Burns could be backed to instantly move on from Sunday’s setback, or Farrell could decide to give Ross Byrne another opportunity.

If Harry Byrne is to get his chance, the round three trip to play Italy looks the most obvious window. Of course, Byrne is still relatively raw, his senior rugby experience largely consisting of routine Pro14 wins with Leinster. It would be a big challenge for an uncapped 21-year-old to step up and slot in at Test level, but it’s one you imagine he would relish.

There must of part of Andy Farrell, thinking, ‘Why not?’