'We're powered by generators, our toilet sewers collapsed... we've got a great set of matching posts, the uprights are broken on both'

The charm of grassroots rugby can have its drawbacks on a fresh October morning. Last week Ugo Monye found himself at Erdington RFC with a shiny new plaque tucked under his arm, preparing to present a small club with a significant award. The realities of life at the grassroots quickly struck home.

“We couldn’t even offer the guys a cup of tea,” laughed Andy Trueman, community officer at Erdington RFC, the small club located a few miles north of Birmingham. “We’ve not got a lot. We are powered by generators, we’ve got no mains electricity.

“Our toilets, the sewers collapsed. We’ve got a great set of matching posts… the uprights are broken on both of them. We’re on a field that is accessed by people and dog walkers and as a result of that pitches get soiled. We had a double-decker bus which we don’t use at the moment with Covid, but that’s converted with showers on it and a little rest facility. It’s very, very basic.”

Yet for a small club Erdington are making a big impact. Monye was in town to present Erdington with the inaugural Gallagher Rugby club of the season award, recognition that came on the back of their Changing Lives Through Rugby initiative.

“The Erdington constituency is the fifth most deprived in the UK,” Trueman explained to RugbyPass. “Our bordering constituency, which is right next to the rugby club, is Hodgehill, the third most deprived. So they really are the bottom of the scale in terms of wealth in the UK.”

And @ErdingtonRugby is revealed as our winner and 1st ever Gallagher Rugby Club of the Season! ???

An amazing win, an amazing club – watch their reaction as @ugomonye springs the surprise >#GallagherRCOTS pic.twitter.com/7uWr46bblo

The focus of the initiative is to offer an outlet for kids in an area where the attraction of crime is always sitting at the front door. As part of their work in the community Erdington provide volunteer outreach support to local police, offer coaching sessions in schools, have developed a mental health assessment tool and run an after-school club which targets pupils with behavioural issues.

For many of the kids involved, the lifts to training and hot meals provided are a welcome part of the package. “It’s about trying to keep kids on the straight and narrow,” Trueman continued.

“In the Erdington area, there’s a lot of dysfunctional families, and if kids aren’t given that right level of care, attention and community within the family, they seek it elsewhere and they go to find the gangs, or the gangs find them.

“If they’ve got problems, they can ring us up – we will deal with those issues. We are trying at the moment to get some of our older kids placements in colleges. We’re doing that and we’re doing it because we care.”

Former England and Harlequins star Monye, a member of the judging panel for the award, was hugely impressed by what the Erdington club have been achieving. “One of most stand-out things was, it’s a challenging area socio-economically and Erdington do so much with so little. It’s the authenticity about who they are, what they are, and what they are trying to deliver.

“I met a brother and sister who get on two buses and travel an hour to get there. Part of that is because they love being there and the other part is that it gets them off the streets for a couple of hours. That’s what we’re dealing with.

“I often think rugby in this country… because it has this elite tag, that we only speak to a certain demographic of people and we often neglect the fact that it can change people’s lives. Erdington absolutely do that. “The top of the scale of course has got this linear public school pathway into the game… academy, the Premiership, England. But at a grassroots level, where everyone starts, it can have a far greater impact on people’s lives than picking up trophies. These guys are doing incredible things.”

All this from a club which had to completely rebuild just a few shorts years ago. In 2003 Erdington’s clubhouse burned down and the club was forced to close its doors. They reformed with no facilities or players in 2016, but the new members quickly rolled up their sleeves and began making their presence felt in the area.

At the heart of all their good work is an emphasis on inclusivity. Erdington welcome players of all backgrounds, something reflected in the makeup of their teams, and Monye believes it is an area rugby is slowly getting better at.

“The game of rugby is really welcoming, but it doesn’t always stretch its arms out – you have to be in that bubble first. But we are making great strides. We have made far greater strides in the last six months than we have in the 20 years I’ve been involved in the game. 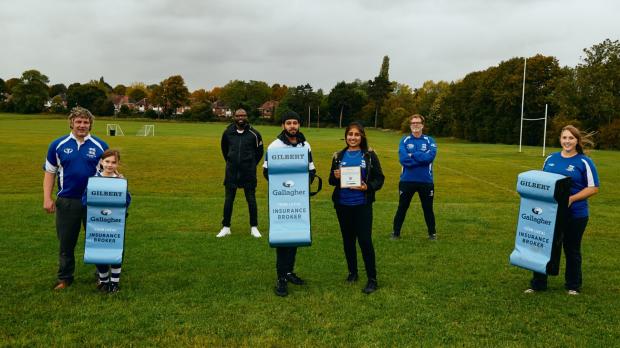 “The fact that people are having conversations about it [inclusivity] is a great starting point. I mean, at the top end of the game, we haven’t even had an anti-racism programme in the 25 years the game has been professional.

“It’s good to see from the top of the RFU, they put out a big statement regards to diversity and inclusion. Premiership Rugby did the same. It’s one of those topics which you can probably never do enough, but that shouldn’t ever put you off from wanting to do more. It’s great to see that there is a willingness and an understanding, and it’s being acknowledged that we have got a good way to go.”

In Erdington’s case that willingness to embrace diversity has helped the club thrive, although lockdown has thrown up some fresh challenges. “Most of what we have done has been funded by West Midlands Police and private sponsors,” explained Trueman. “The private sponsorship side of it is drying up. A lot of companies that have supported us have suffered through Covid themselves.

“Then with the initial big lockdown we had, we managed to keep in touch with the kids through social media groups, etc, had a laugh and a joke, kept winding them up about when rugby would start again. Obviously we have stuck to the rules coming out of the RFU and we have restarted training.

“It’s like a pressure cooker lid lifting. The kids have loved coming back down again, but we’re still lacking that contact element which a lot of these kids need. So hopefully things get better, start to relax, and when we come out of lockdown we will start flying again as a club.”

On his visit, Monye learned that Erdington is currently home to over 100 U18 players, a squad of over 50 senior males and a mixed gender touch rugby team. Not bad for a club which only reformed in 2016. “We’re not a rugby club, we’re a club that plays rugby,” Trueman continued.

“That ethos is good in terms of if you’re starting fresh in an area with nobody bought into the sport. I mean, a lot of our kids don’t watch rugby on television. They will quite happily come and tackle people on a field and throw a ball around, but they are not bought into the game per se whereas in traditional rugby communities you’ll find people who live and breathe rugby, and have done since they were children.

“So part of what we do is try and get people into that community spirit, get down to the club, and then they take the rugby as part of it.”

??Wasps are backing us are you??? https://t.co/YDS4mvBxab