END_OF_DOCUMENT_TOKEN_TO_BE_REPLACED

'He should never captain the All Blacks again': NZ leadership guilty in numerous late collapses
M
Mark 13 minutes ago

Yes, it was a troubling last 10 or so minutes, that quite frankly was piss poor play from the AB’s. I thought I was watching a different team, making decisions that we expect from other teams ,not us. This mental breakdown has to be addressed, recognised and dealt with in a hurry.. we can’t take this attitude to France next year Or we’ll be blown away .

END_OF_DOCUMENT_TOKEN_TO_BE_REPLACED
Ditch the stereotype: This Springboks team can play
W
Warren 16 minutes ago

I agree with the author. Something special is brewing. And based on the November results, I reckon these Boks are saying "yes, we lost to Ireland and France, but we know we can beat them on any day" there will be belief in this group, especially after the Marseilles match. I think Faf will be trusted with goal kicking. I also think that Cheslin's spot in the starting 15 isn't guaranteed. Don't be surprised if the backline looks like this - 9: Faf, 10: Damian, 11: Moodie, 12: Allende, 13: Lukhanyo, 14: KLA, 15: Willie. A 6-2 split bench with Cheslin and Jaden on the bench. Exciting.

Jerome Kaino escaped on-field sanction for a brutal flying shoulder into Higginbotham’s spine during his final home game for the Blues at Eden Park, but minutes later Taniela Tupou was less lucky. The young man know as Tongan Thor went in for a classic grasscutter, taking out two blokes in one fell swoop, but was pulled up by the TMO and binned for a dangerous no-arms tackle.

Could this be the ellusive evidence of referee bias towards NZ teams that folks have been braying about? Could this be a case of referees turning a blind eye during the big occasion? Jerome Kaino, a great All Black, a world cup winner, will always be remembered for the hardness of his shoulder, but this parting impact tarnishes that legacy somewhat.

After watching the two incidents side by side and considering the danger of each act, it’s hard to justify the disparity of the on-field judgements.

Whilst commentator Andrew Mehrtens highlights the danger to knees and ankles following Tupou’s no-arms tackle, surely the greater concern should be for Scott Higginbotham’s spine? The big Red was totally blindsided by what can only be described as a very cheap shot.

Reds head coach Brad Thorn joined the chorus of criticism levelled at officials this year: “I don’t know if that’s enjoyable for anyone” 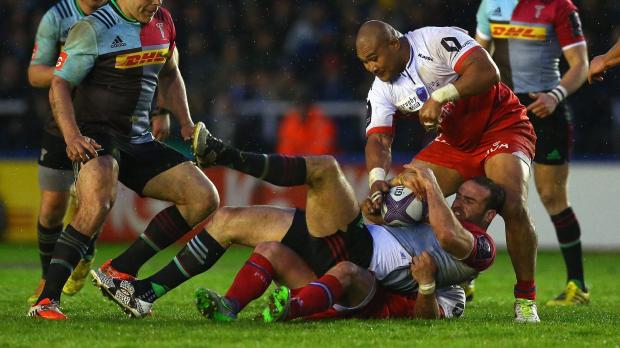