END_OF_DOCUMENT_TOKEN_TO_BE_REPLACED

Sam Simmonds scored his 13th try of the Gallagher Premiership season as champions Exeter fought back to sink Bath 38-16 at the Recreation Ground.

Simmonds, who continues to be overlooked by England boss Eddie Jones, could not fail to have impressed watching British and Irish Lions head coach Warren Gatland.

The Exeter number eight needs only four more touchdowns to equal the Premiership try-scoring record for one campaign, and there are still 10 rounds of regular league season action left.

Exeter trailed by 13 points midway through the second quarter after wing Ruaridh McConnochie scored a try, which Rhys Priestland converted, and he also kicked two penalties.

Sam Simmonds will not be denied, that's 13 tries for the season now ?

Joe Simmonds kicked four conversions, with Priestland kicking another penalty for Bath, who were ultimately overpowered despite England flanker Sam Underhill making a strong first appearance since January after recovering from a hip injury.

And it would be no surprise if Underhill earns an England squad recall ahead of next weekend’s Guinness Six Nations clash against France at Twickenham.

Underhill featured in a Bath line-up that also saw prop Beno Obano starting after he was released from England duty, while Wales number eight Taulupe Faletau filled the role of blindside flanker.

Any chance of someone showing this montage of Sam Simmonds 12 tries in the @premrugby so far this season to a certain E. Jones please @btsportrugby pic.twitter.com/uucdRzM9zT

Exeter were boosted by the return of Scotland internationals Stuart Hogg and Jonny Gray, and hooker Jack Innard packed down in the front-row instead of suspended Chiefs captain Jack Yeandle.

Bath absorbed early Exeter pressure and they were able to clear the danger after Underhill secured a turnover and Exeter were then penalised.

Priestland then booted Bath into the lead with a short-range penalty as he extended his Premiership record to 33 successful kicks. 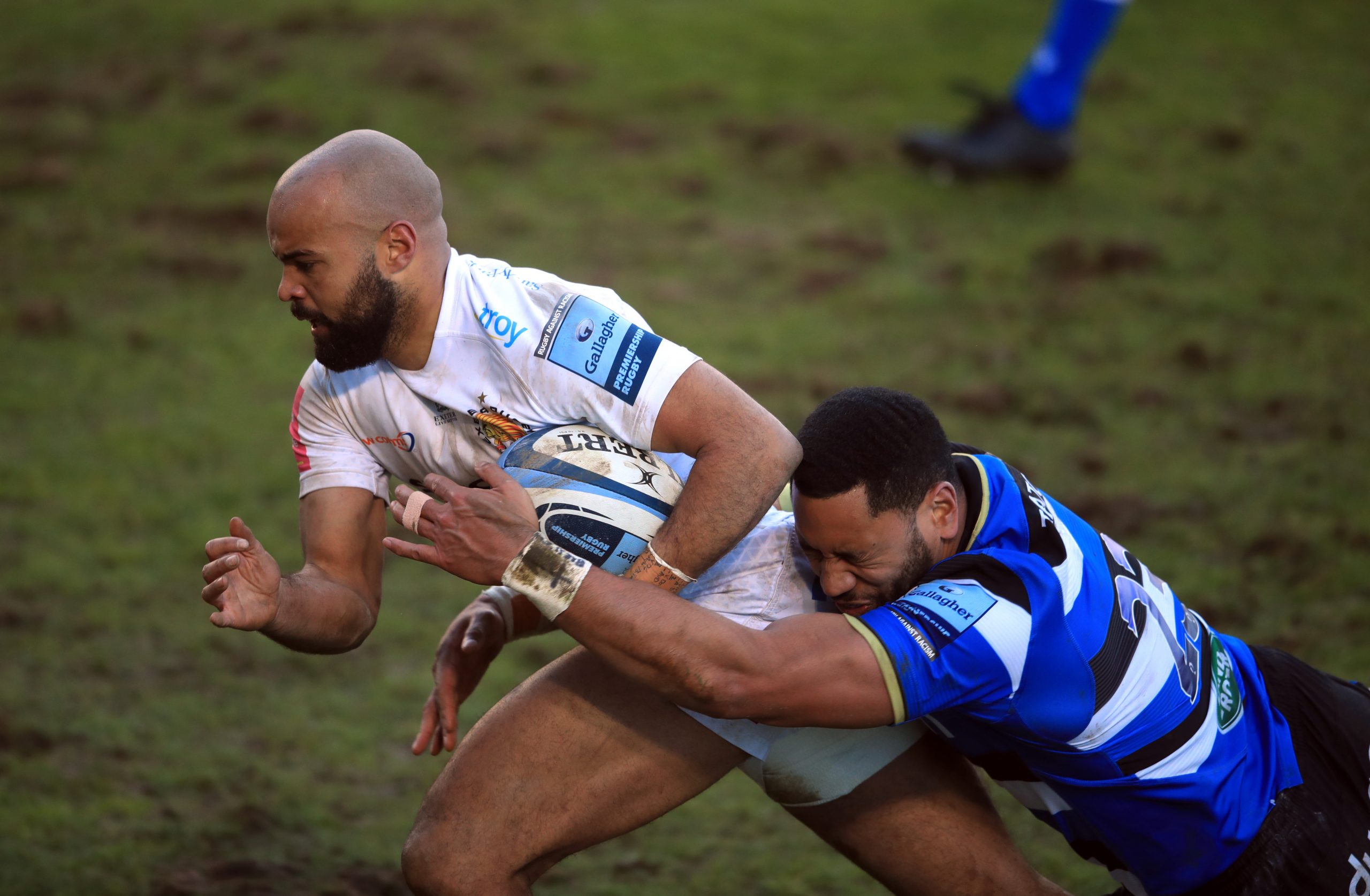 It got even better for Bath just two minutes later, and Priestland was heavily involved, setting up a scoring chance for McConnochie by launching a pinpoint cross-kick.

McConnochie still had plenty to do, but he soared high, before spinning and turning to touch down, beating off the twin challenge of defenders O’Flaherty and Jack Maunder.

Priestland converted, and Bath were off and running, holding a 10-point advantage in rapid time. 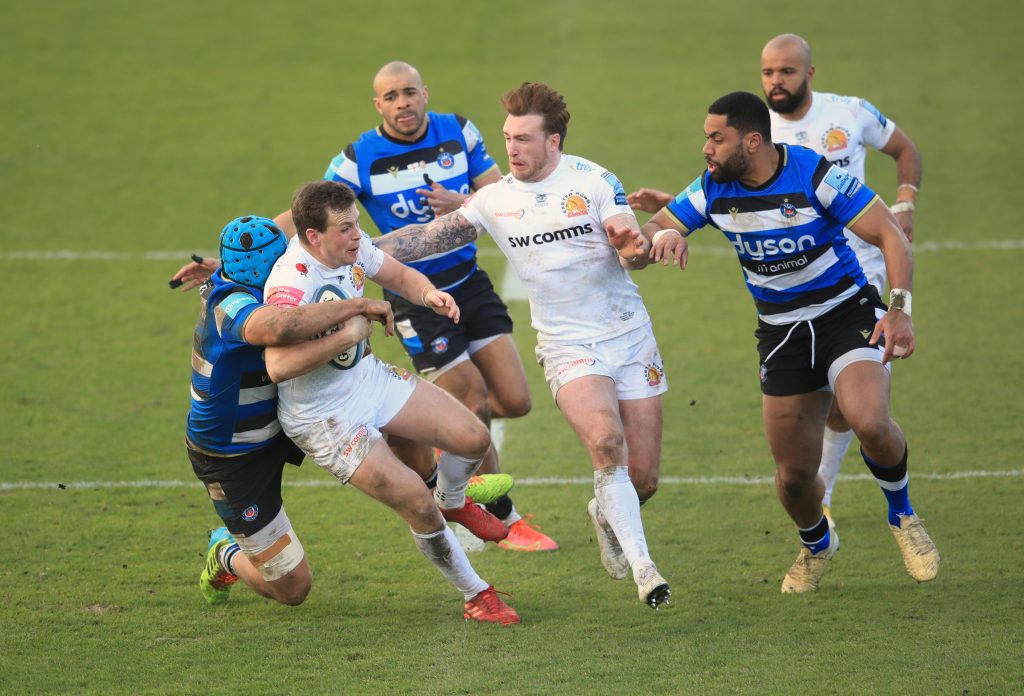 Exeter could not escape from their own half, with Bath monopolising possession as Priestland kicked a second penalty.

The Chiefs needed to summon a response, and they delivered 11 minutes before half-time after securing lineout ball close to Bath’s line.

Bath might have expected a trademark catch and drive from the visitors, but possession quickly found its way to Maunder, who sent O’Flaherty over for a smart try that Joe Simmonds converted.

And Exeter were not finished as the interval approached, claiming a second close-range try as Sam Simmonds powered over for his 13th Premiership try of the season. 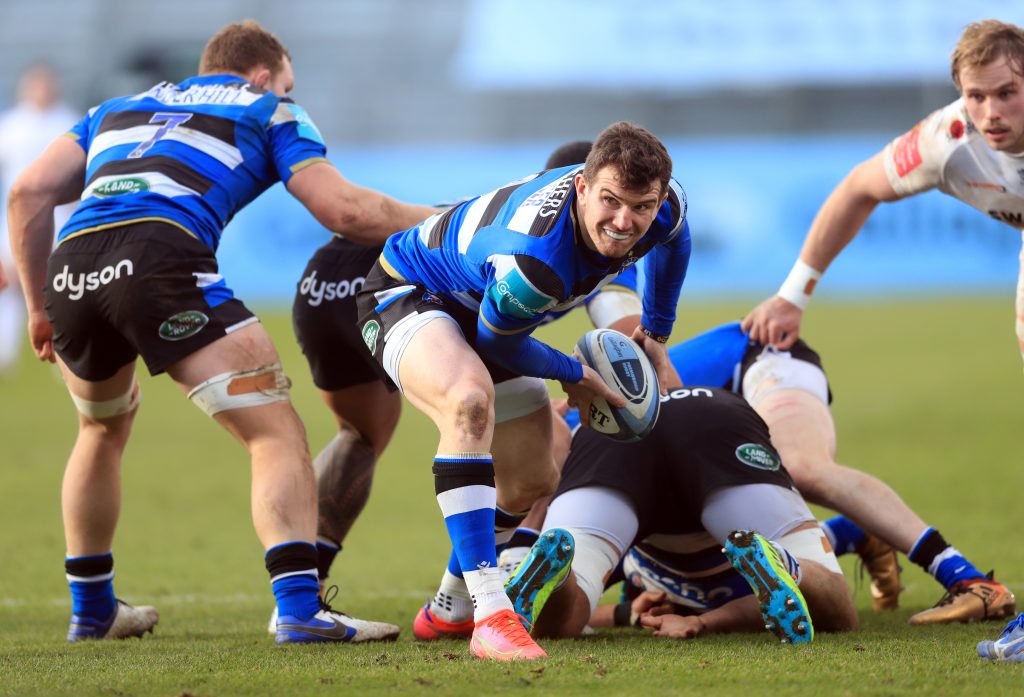 His brother drifted the conversion attempt narrowly wide, yet Exeter were well and truly back in contention, trailing by just a point at half-time.

Bath regained momentum early in the second period, impressively going through phase-play, even if they were unable to threaten Exeter’s line.

Underhill was replaced by Miles Reid midway through the third quarter, and Bath’s energy was rewarded when Priestland completed a penalty hat-trick.

Exeter came storming back, though, and they went ahead for the first time through a 61st-minute Skinner try that was made by Sam Simmonds’ powerful charge from the base of an attacking scrum.

Joe Simmonds’ conversion opened up a three-point lead, then Skinner claimed his second try in six minutes as Exeter secured a bonus point, and it was a case of job done.