'They told us to act like it was a war, to show them that we were ready for a good fight'

Piutau: Bristol is 'something special' Next
Back
Internationals

'They told us to act like it was a war, to show them that we were ready for a good fight'

There’s always a buzz around the Hong Kong Sevens, the world’s premier tournament for the short version of the game. The stands are packed with boisterous fans, often in fancy dress, and the beer flows as easily as the tries. It’s not quite anything goes, but certainly there are few sights across the three days of action that would raise too many eyebrows.

That was, perhaps, until the 2019 edition, when to the delight and slight puzzlement of the raucous South Stand at the Hong Kong Stadium, the subject of this chapter – dressed as a caveman, complete with animal pelts across his chest – belted out a version of ‘I’m Gonna Be (500 Miles)’ by The Proclaimers.

Flanked by three men wearing leopard skins, fake moustaches and pretending to play musical instruments, the performance wouldn’t get too many marks for his singing but would receive extra credit for his enthusiasm.

The commentators, before dissolving into fits of laughter, expressed their delight: “Things I never thought I’d see on a Friday afternoon in Hong Kong… Sébastien Chabal singing [laughter]. I think I’m done. I’m dead. French hard man! [more laughter] He’s still a hard man, the former French star, but when the men in the leopard-print jumpsuits aren’t the story. Only in Hong Kong! Crank it up. That’s just the best… [dissolves into laughter].”

This performance was part of his work for Marriott Hotels, promoting their new loyalty points scheme. Other videos in this partnership see the 6ft 3in, 18-stone Frenchman dressed as a maid, a chef and in full drag, complete with wig and heels.

The true stories behind 20 of the toughest players to ever play the game, from pre-WW1 firebrands to modern-day YouTube sensations. They are shocking, gruesome, funny and sometimes tragic, but what unites these men is their total commitment to the sport.@Books_Wales #loverugby pic.twitter.com/lYjqCeFUrs

The chief creative officers of Ogilvy, the advertising agency that created the campaign, said: “We chose Sébastien because of his continued passion for the game of rugby, even after his retirement. During his playing years, his ability to manoeuvre creatively around the pitch and inspire fans is perfectly aligned with the Marriott Hotels ethos of innovation, creativity, dynamism, and inventiveness.”

Of course it is.

Helping sell hotel stays to business travellers is a long way from the 2007 World Cup, when Chabal glared and snarled his way through a rare challenge to the haka that preceded a famous French victory over the All Blacks. But then the Chabal story has always been a complex one.

Born in Valence, south-east France, to a working-class family with no interest in rugby, he didn’t play the game until he was 16 so there was no fast-track through an academy or age-grade representative games for him, unlike most who reach the top level of the sport.

After leaving school he played rugby only at weekends, spending his week as a milling machine operator for an engineering firm. It was only in 1998, aged 21, that he joined Valence Sportif in the lower reaches of the French rugby pyramid and not until two years later, when he joined Bourgoin in the top flight, that he became a fully-fledged professional. His uncompromising tackling quickly helped mark him out as a ferocious player and he picked up the nickname ‘the Anaesthetist’ on account of its effects on opponents.

Chabal’s international debut was aged 23 in France’s 2000 Six Nations win over Scotland and he established himself in that tournament as a solid, though not spectacular, cog across the back five of the pack in an inconsistent French team. He went to the 2003 World Cup, where Les Bleus came fourth, but was not a regular starter in the big games, being relied upon more as an impact player off the bench.

In 2004, he moved across the Channel and joined Sale Sharks. He proved popular at the Manchester outfit and spent five seasons in England, winning the Premiership in 2006 and enjoying some memorable performances in European competition, including a Challenge Cup triumph in 2005.

Coached by fellow Frenchman Philippe Saint-André, who he had worked with at Bourgoin, he played the best rugby of his career in England. Lining up alongside the likes of razor-sharp backs Jason Robinson, Charlie Hodgson, Mark Cueto and Mark Taylor, he was the lynchpin of the forward pack.

Fans loved his strong running and fearsome tackling and were known to wear t-shirts showing Chabal’s face over a skull and crossbones, with the slogan ‘Cha-bad to the bone’ written underneath. Whilst in England, he was only shown a modest three yellow cards, although in 2006 he received a red card and a five-week ban for stamping on Lawrence Dallaglio whilst playing for Sale versus Wasps.

But while settled and happy in England, there were aspects of the local culture he was less keen on. Predictably, as a proud Frenchman, this centred on the food. “It’s a very different way of life. There’s no getting away from that. The weather’s bad. It rains a lot. Above all, I find the food bizarre.

“I hardly ever eat English food. My wife and I share the cooking at home. I cook lasagne, boeuf bourguignon, anything really. And when we go out, we look for French restaurants. I don’t think much of the English food I have tried. I certainly don’t like fish and chips! It’s all a question of taste, I suppose. I know the English think it’s bizarre we eat snails and frogs’ legs and steak tartare.”

The big change in his life came in 2005 with the birth of his daughter. It’s not unusual for someone to gain a different perspective on life when they become a parent. And yes, I have no doubt that welcoming little Lily Rose into the family made a huge impact on Chabal. But it wasn’t the baby that altered the course of his career.

It was the growth of his hair and beard.

A pre-fatherhood Chabal had sported a fairly nondescript short back and sides (Google the photos – you’ll barely recognise him!) but when his wife got pregnant, he resolved to let his hair and beard grow until the baby arrived. Once the nappy changes and night feeds were well underway, as his wife liked it, the hirsute look remained. 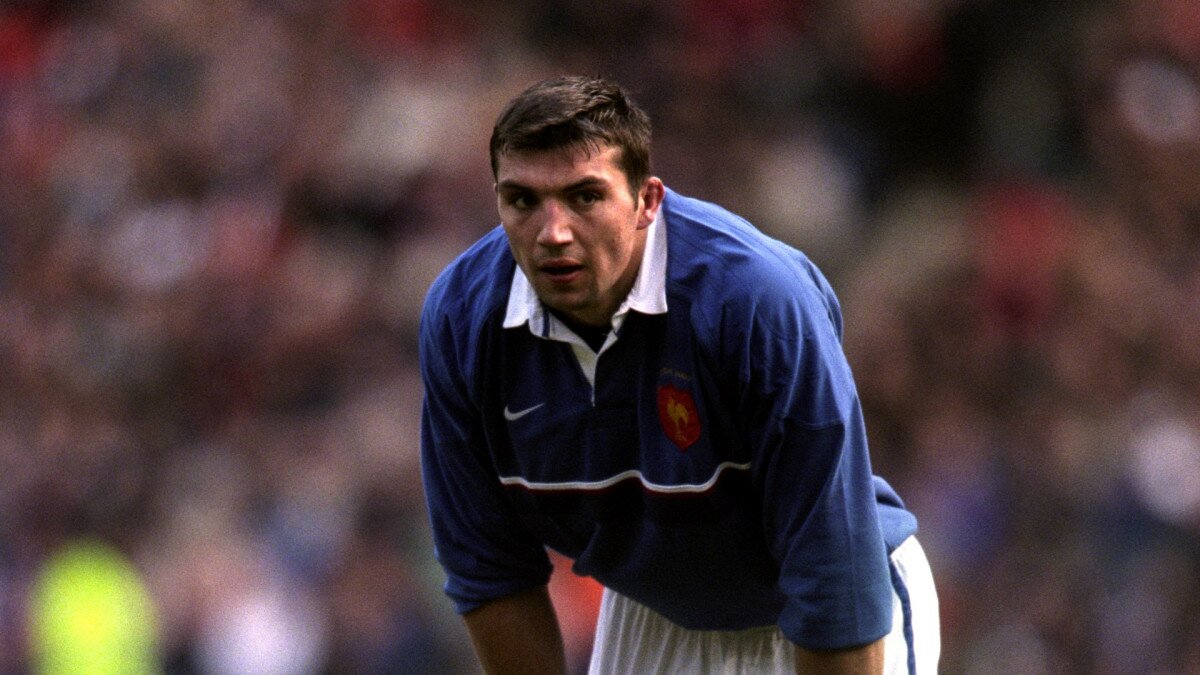 Already an imposing physical specimen, the combination of the flowing black hair, the long beard and the dark piercing eyes made him one of the most instantly recognisable and popular rugby players in the world.

With the image change came the attention – Chabalmania – and with that, the money. By the end of the 2007 World Cup, he was the world’s highest-earning rugby player, bringing home more than Dan Carter, Brian O’Driscoll, Jonny Wilkinson or any other player you wish to name from this time.

But before we get into that World Cup and the crazy world that Chabal began to inhabit, let’s rewind to the summer before the tournament when, in just a few games, he jumped from someone a series of French coaches had never fully trusted to being a talisman for not just the team, but the whole country.

The marker was put down just 30 seconds into the first of two Tests away in New Zealand, when a high, looping pass came into midfield, giving Chabal the chance to select his target.

A split second after All Black flanker Chris Masoe caught the ball, he was smashed into by ‘the Caveman’ and unceremoniously dumped onto the floor, where he spilled the ball. The Kiwi, himself a tough character, staggered a little when he eventually got to his feet and gave a little rueful smile as his teammates checked on him.

The video of this big hit and Chabal triumphantly flicking back his hair afterwards, looking like the toughest pony you’ll ever see, was shown on repeat that week in France and New Zealand, becoming an early YouTube sensation, and to this day it remains a textbook example of how to line up and execute a very hard but legal tackle.

Seven days later in the second Test, ball in hand and short of options on either side of him, Chabal decided to take the direct route through All Black Ali Williams, whose jaw was broken in several places while trying to impede Chabal’s progress. A big hit on Williams and another big hit on YouTube.

'He had the biggest biceps in the All Blacks squad, with a 52cm circumference – the same size as Arnold Schwarzenegger at his peak'

In an extract from his new book, Hard Men of Rugby, @MrLukeUpton ??? looks back on the remarkable career of Jerry Collins https://t.co/Sk6922BUnz

This further enhanced Chabal’s hard-man reputation, but also had a more unexpected impact: it led to Williams publishing a cookbook. The Kiwi flanker had his jaw wired and missed six weeks of action, and he put out a video plea for soup recipes, complete with a special email address: soupforali@allblacks.com. He received over 1,000 and ended up releasing a book with 140 of the best, Soup for Ali: Recipes that rescued Ali Williams. Still available in all good New Zealand bookshops, I’m sure. And yes, he did send a signed copy to the man who caused it all.

The final act in Chabal’s big summer in 2007 was a superb, decisive try in a win over England at Twickenham. Not long off the bench, and with ten minutes left to go, his pace found him some space in the England half. He brushed off two would-be tacklers before Josh Lewsey tried to stop him near the line, but Lewsey went too high and couldn’t stop Chabal crashing over the try line.

This trilogy of performances saw Chabal arrive at the World Cup as a big star. Whilst still operating mainly as a substitute, his face and Neanderthal image was across billboards, adverts, magazine covers and newspaper front pages.

A puppet was made of him for France’s version of Spitting Image, Les Guignols de l’Info and he was voted not just the sexiest man at the World Cup but the sexiest man in France. When he appeared on the pitch, French fans shouted, “Mmmm… Chabal!” in reference to an advertisement for ‘100 per cent French beef’, which carries the tag line “Mmmm… Charal!”