Speargate: The 2005 scandal that changed the way rugby polices the contact area

Speargate: The 2005 scandal that changed the way rugby polices the contact area

In the history of rugby, no clearout at a ruck has ever been as contentious as the one that gave birth to the infamous Speargate scandal in 2005. Less than a minute into the 2005 British and Irish Lions’ first Test against the All Blacks in Christchurch, captain Brian O’Driscoll was cleared out at the ruck by his opposing outside centre and captain Tana Umaga, alongside hooker Keven Mealamu, in an event that will still leave a bitter taste in the mouth of many from the British Isles.

With touch judge Andrew Cole mere metres away, the pair upended the Irishman and drove him head-first into the ground, dislocating his shoulder and ending his tour, only to go unpunished in the match.

For viewers at the time there was not great televisual footage of the offence, largely because this was so late that play, and the attentions of the cameramen, had moved on. The most noticeable thing was O’Driscoll’s cry of pain when landing more than anything visual.

Dallagio looks back the 1997 tour with Big Jim

This is what ultimately proved to be the problem, as, despite Lions coach Sir Clive Woodward reporting Umaga and Mealamu to the International Rugby Board’s citing commissioner, Willem Venter, there was deemed to be insufficient footage, and the pair were cleared. It was only in the succeeding months that more angles emerged which were more incriminating.

Speaking in a press conference the next morning, the Lions centre did not mince words, as the New Zealand Herald reported:

“I have no doubt whatsoever that it was some sort of spear tackle that ended it.

“My real disappointment was that he (Umaga) didn’t come up as I was being stretchered off which I thought would just be a common courtesy between captains, whether he had been involved or not.

“I don’t know whether that shows any element of guilt or not. At the time and post-match when I thought about it, that certainly disappointed me.”

There is no greater indicator of the severity of the spear than O’Driscoll seeing it as a positive that he did not break his neck. But needless to say, Woodward was exasperated at the entire ordeal, and lambasted the citing process in a week long onslaught to the press by the Lions team. This was an event that furcated the two opposing camps beyond the simple status of being Test opponents, it created a new level of animosity, which was perhaps magnified by the Lions’ poor showing.

This opened widespread speculation that the All Blacks had targeted the Lions’ captain and talisman, something that the Rugby World Cup winning coach ruled out. He nonetheless described it as a “dreadful foul”, as reported in The Independent.

Umaga and the All Blacks head coach Sir Graham Henry were keen to move on from the issue despite the storm that was created, more or less saying that it was a part of rugby. Of course, from their perspective that is understandable as nothing productive was going to come out of discussing it.

The captain did comment on the position that O’Driscoll had taken though, particularly how he had not gone to see him. The BBC reported in a press conference that Umaga said he had other priorities at the time, saying: “At that stage I had to try and keep (the team) together. It was such a lengthy period, we had to sort some things out that worked for us.”

By modern standards there is little or no doubt that both Umaga and Mealamu would see red for inflicting an injury in which it took 25 minutes to relocate O’Driscoll’s shoulder. Furthermore, with greater power to the television match officials today and advancements in technology, it would have been much easier to address the situation on the pitch and for the correct action to be taken. 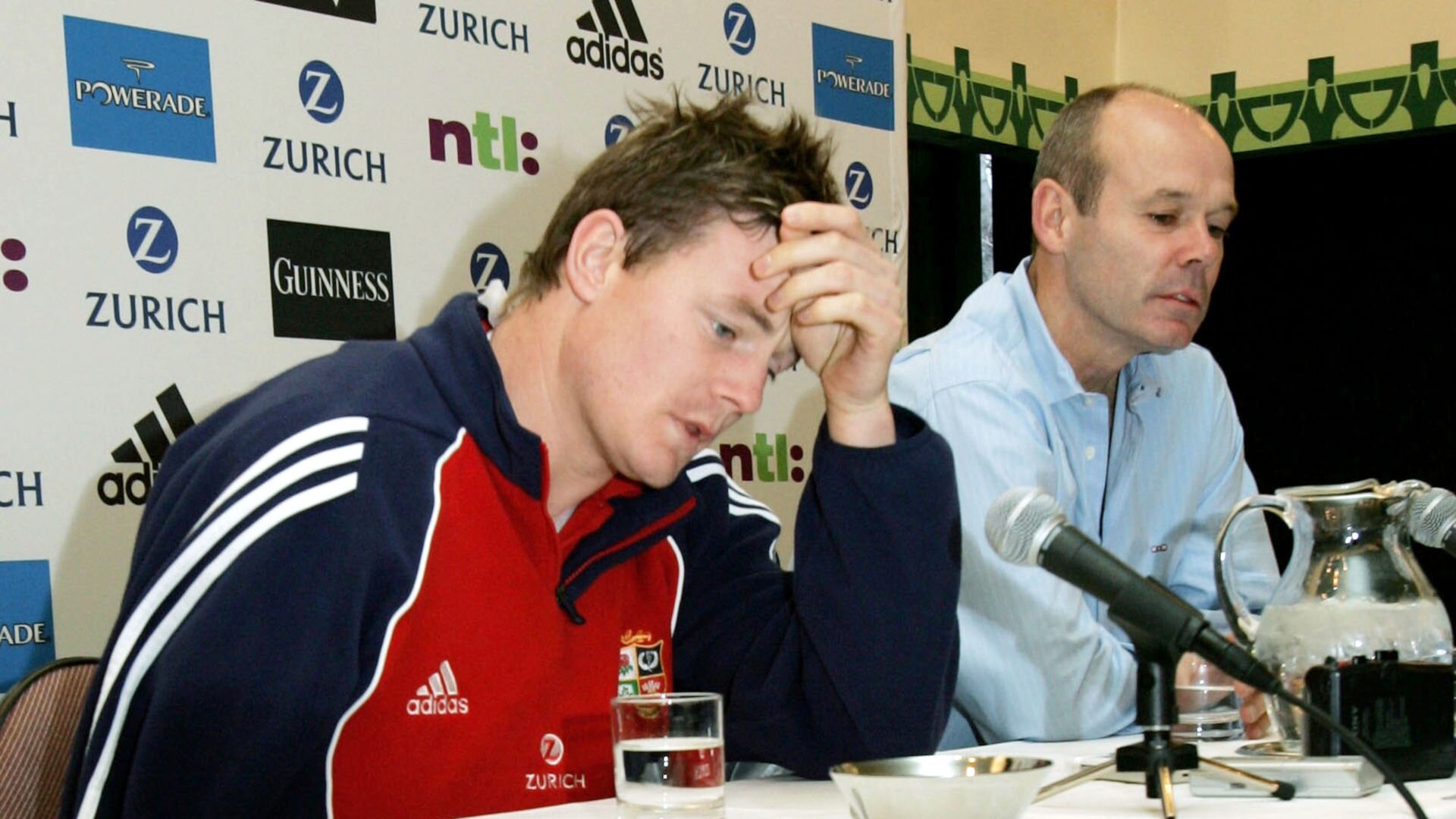 Even by the standards of 2005, this was still a reprehensible act, although it was not until the amateur footage of the clearout was made public that the IRB condemned it, despite having access to it beforehand.

But what lingers from that fateful night in Christchurch is some of rugby’s biggest ‘what if’ questions. Firstly, what if the Lions were able to keep their captain for all three Tests? Secondly, would the series have panned out in a different way had Umaga and Mealamu been punished in the match, or retrospectively, in the way many from the British Isles deemed justifiable? The All Blacks captain went on to score three tries in the series and was as potent as ever in the midfield. 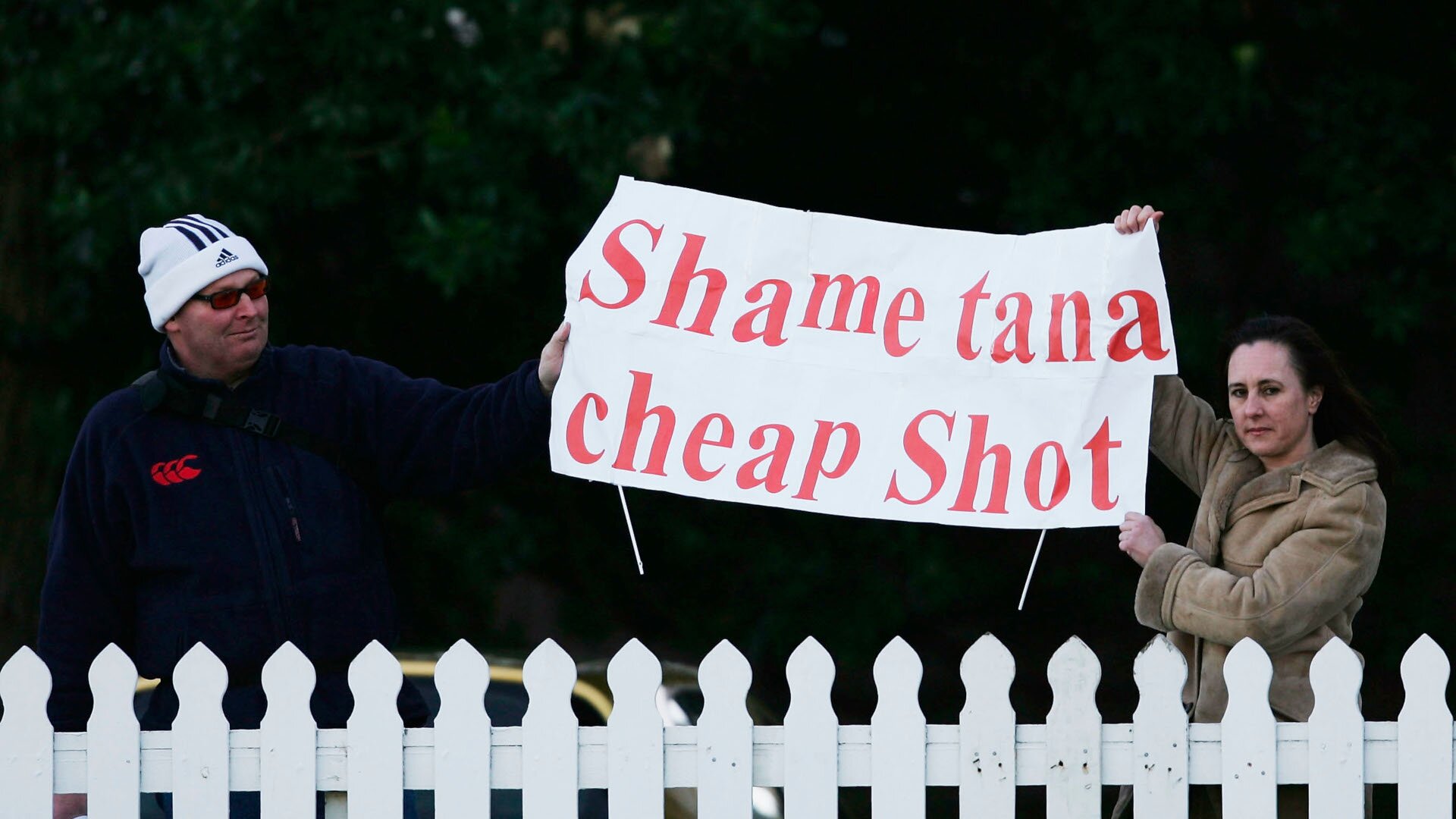 The hosts were by far and away the better team throughout the series, but O’Driscoll was one of the giants of the game at the time and only managed 41 seconds of the entire series. While some may say that his presence, or Umaga’s lack of, would have been inconsequential, we would only need to fast forward twelve years to the Lions’ return to New Zealand to see the impact of a red card.

After dominating the first Test, a 25th minute red card to Sonny Bill Williams in the next meeting for a shoulder charge to the head of Anthony Watson was one of the deciding factors in swinging the match, which ultimately led to a drawn series after a third Test tie.

It is impossible to know whether the permutations of any different decision-making in 2005, but it left plenty of bad blood for years to come. However, it is something that is buried in the past for the two players.

Brian Odriscoll and Tana Umaga performed the traditional Maori Hongi, a strong symbolic show of unity between two people showing how they have put that “spear tackle” behind them! pic.twitter.com/68I20FFmFx

The Ireland legend was quoted in The Irish Times 13 years later: “We parked it a long time ago.

“It was one of those things. Was it unfortunate? Yeah. Should you have dealt with it slightly differently? Yeah. You’ve got to move on. You can’t bring those sorts of things through life.”

The game has progressed in such a way that it is unlikely that there will ever be a situation akin to this one again. There will undoubtedly be decisions by citing panels that some may not agree with, but not where a player like O’Driscoll or coach like Woodward feel so mistreated. It goes to show how much has changed in 15 years.