'He's the perfect guy' Next
Back
Six Nations

There may be a gap of 225 days in between Ireland’s two 2019 fixtures against Scotland, but next Saturday’s Six Nations outcome in Edinburgh will likely have a major influence on what happens when the teams reconvene on September 22, some 5,750 miles away in Yokohama at the World Cup.

Win at Murrayfield and Ireland will have an unshakeable belief that the Scots are but a minor road bump on the way to potential glory in Japan.

Lose, though, and all bets made since the 2017 pool draw in Kyoto – that Ireland’s progress to the last eight will be a stroll – are suddenly off.

Breeding Scottish confidence is the last thing Ireland will want to do with the Far East in mind, so it’s important to keep turning the psychological screw on their Celtic cousin and leave them fearing what Joe Schmidt’s team are capable of.

It was this type of fear that was decisive in Ireland’s 2015 finals pool. Schmidt’s charges comprehensively dismissed France in Cardiff despite the huge in-game catalogue of injury that cost them a leadership trio of Johnny Sexton, Paul O’Connell and Peter O’Mahony.

It was December 2012 when the draw took place for those finals in London and for years in the run-up to that long-signalled pivotal group fixture, a concerted effort was made by Ireland not to give the French an inch.

There was an Irish draw in Dublin in 2013, an excellent result given how that was their worst Six Nations campaign on record and signalled the end of the Declan Kidney era.

Then came the mind-steeling victories, Ireland winning in Paris in 2014 to clinch the championship and then repeating that success in the 2015 renewal back in Dublin. 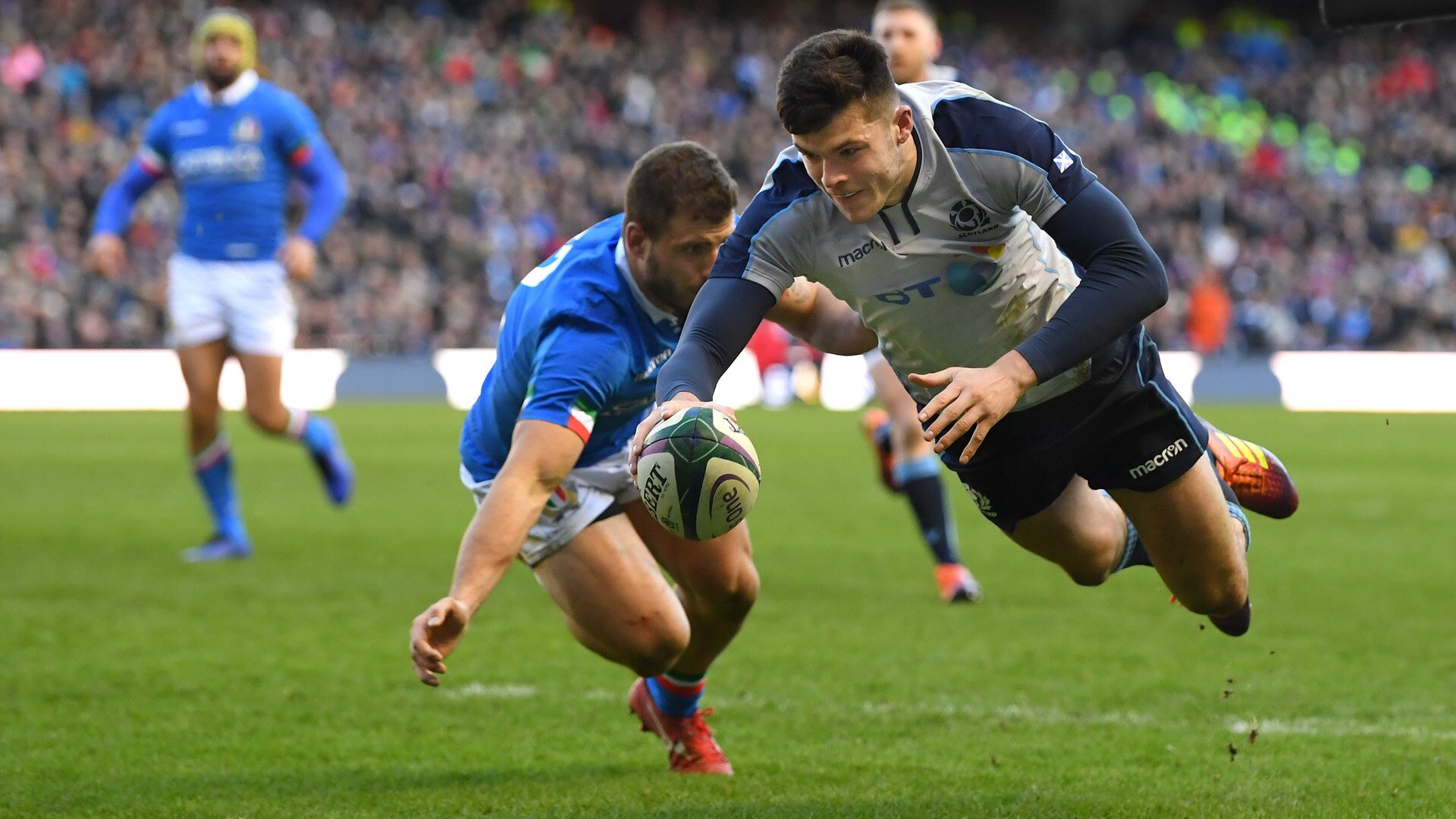 Scotland wing Blair Kinghorn dives over for a try against Italy. Photo by Stu Forster/Getty Images

The pattern of Test results screwed a nail deep in Gallic heads and the consequence was that by the time the pool decider took place, French confidence was at an extremely low ebb and Ireland duly profited.

Now the focus is to screw a similar nail in Scottish heads in time for the 2019 finals by landing the psychological blow of putting Gregor Townsend’s side in the Six Nations ha’penny place.

When Ireland last travelled to Edinburgh, there was still months to go before the two countries learned they would be World Cup pool enemies.

What transpired that February 2017 day was a shock ambush that Joe Schmidt will be going all out in preparations this week to ensure it isn’t repeated, especially with Ireland having lost their opening match to England. 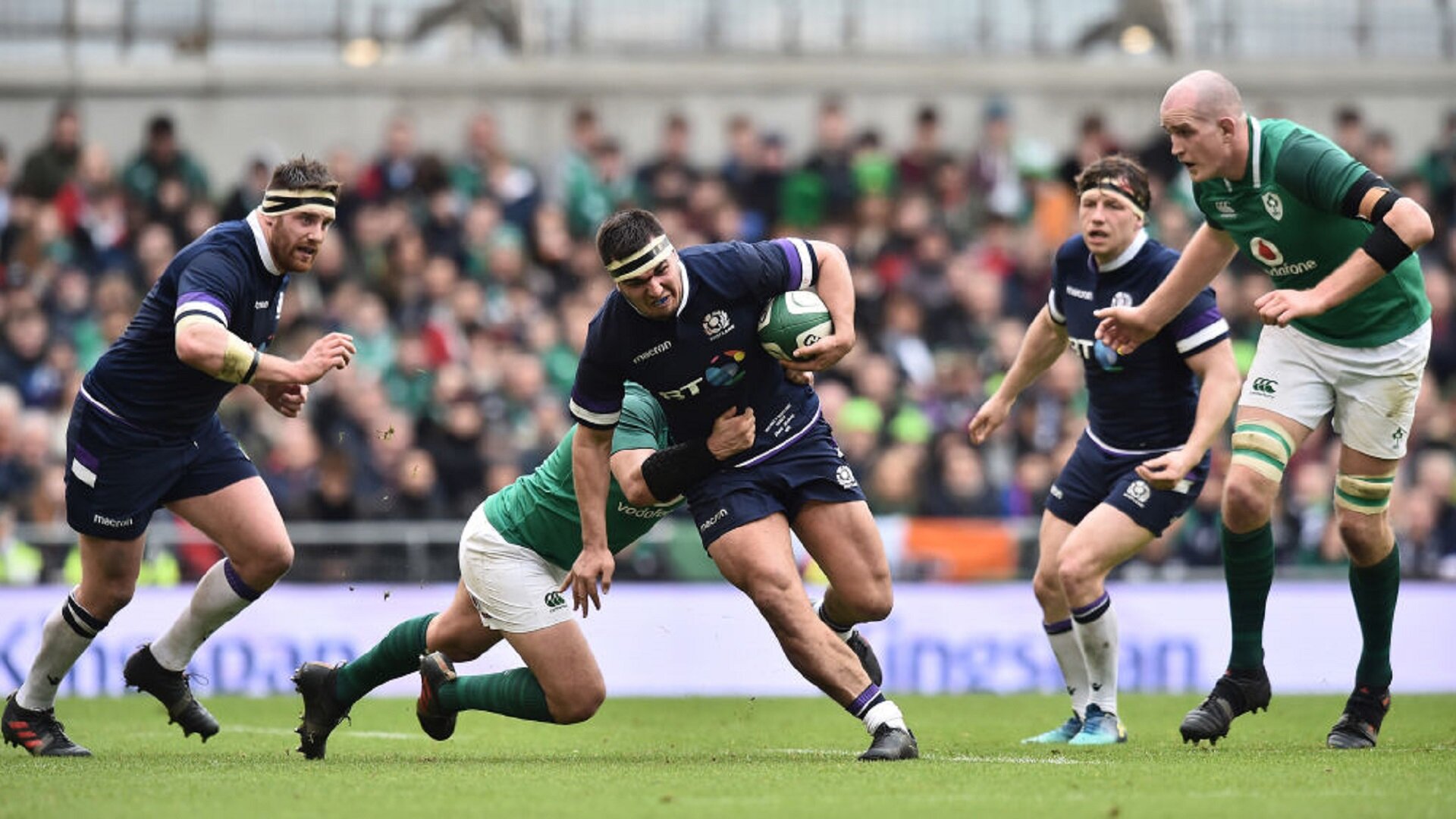 Rory Best of Ireland and Stuart McInally of Scotland during the Six Nations Championship match between Ireland and Scotland at Aviva Stadium. (Photo by Charles McQuillan/Getty Images)

Little was expected from the Scots two years ago as Ireland had long dominated the Test fixture and even clinched the 2015 title in Edinburgh with a runaway hammering.

However, unsettled by their bus arriving late at the stadium, which impacted on their allotted warm-up time, Ireland were caught cold by an early three-try Scottish blitz and they ran out of gas in the closing minutes after over-working to claw themselves back into the contest.

“If the police decide to take us a different route you must abide by that,” explained Ireland manager Paul Dean. “That was the reason why that happened. There are circumstances outside your control that you can’t deal with.”

What Ireland do control is what happens on the pitch and their players have been busy re-establishing their perceived superiority over the Scots.

The provinces have won 17 of the 29 Irish-Scottish club encounters since then, but it was Leinster who took the giant step in retaking the ground surprisingly ceded at Murrayfield 24 months ago.

With so many international players in their respective ranks, Leinster versus Glasgow is the de facto club version of an Ireland-Scotland Test match and the Irish province were merciless in twice defeating the Warriors in the Champions Cup last season before Ireland got their chance of retribution in March last year.

Townsend’s side arrived in Dublin giddy on the back of a victory over England, but Ireland clinically got back to winning ways in the head-to-head, their crushing 28-8 mauling clinching them the Six Nations title with a game to spare.

The Scottish coach, though, remains a canny foe to Schmidt to be wary of. When Townsend took over at Glasgow, rather than forever fear they couldn’t compete with the provinces, he set about mirroring how the Irish went about their business on and off the field and the grand reward was their 2015 PRO12 final destruction of Munster in Belfast.

Now his ambition is to build concrete belief that his country is no longer second rate in the Six Nations. That outcome would be a disaster if it happened. On paper, the draw for the 2019 finals has presented Ireland with an appetising route towards reaching the final, never mind appear in a first ever semi-final.

It’s why getting players such as James Ryan, Jason Stockdale and others into a pre-World Cup habit of beating up Scotland would be invaluable in before they meet-up again in Japan.

This was what happened last time round. The likes of Rob Kearney, Jamie Heaslip and Sean O’Brien became so used to beating France and its club teams that they never flinched when it came to the task of dismissing Les Bleus at England 2015. They made it look easy.

That same psychological pre-finals edge is now being sought with the Scots in Ireland’s crosshairs.